From Mirador del Valle, you watch as the sunset casts its orange glow on the Alcázar towering above a maze of cobblestone roads that wind through a hillside covered in tiers of colorful Spanish buildings. The still waters of the Tagus River wrap around this picturesque hill and slowly flow under the medieval bridges that welcome the modern day visitor. As the sky darkens, yellow lights twinkle among the hundreds of buildings creating a brilliant, yet silent setting where you can’t help but to reflect on the beauty and history of this surreal landscape. 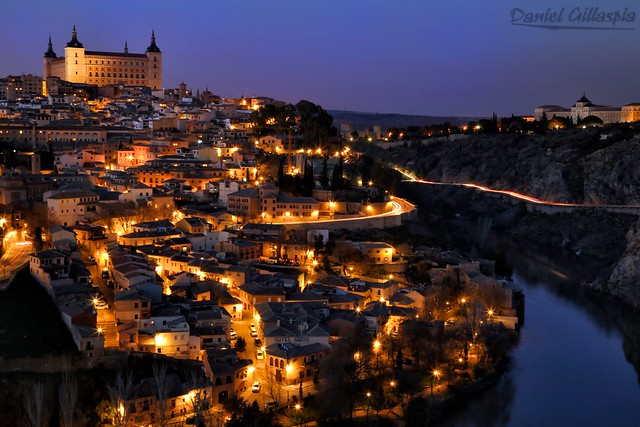 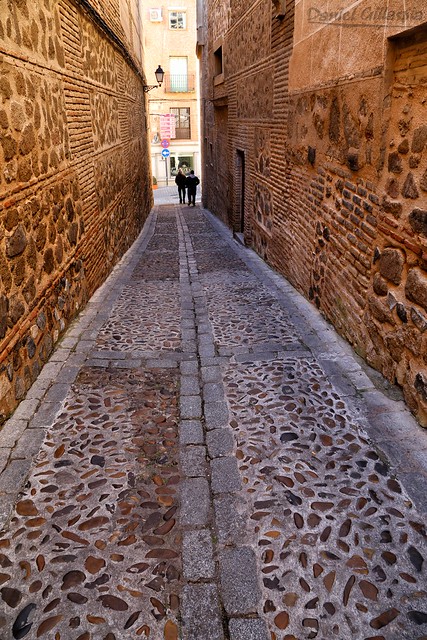 Centuries of human history are felt from the moment you step through the decorative arches of the Puente de San Martín, a stone-brick bridge dating back to the late 14th century. As you make your way uphill towards the city center, cars zip around narrow alleys where sidewalks unexpectedly dwindle into thin curbs until completely disappearing into the cobblestoned roads. Churches and cathedral spires emerge into view as you zig-zag further towards the clamoring of other tourists strolling through the many shops with walls covered in intricately designed ceramic plates and windows lined with endless rows of shiny swords made from some of the finest sword-makers in the world.

The rich history of the city goes back to the 5th century BC, when Jewish inhabitants first settled there and named the city, Ṭulayṭulah. It later served as an important colony for the Romans, Visigoths, and Moors as each civilization rose and fell with power. Eventually, it was the Christians who took lasting control over the city in the 11th century, led by Alfonso VI. For centuries to follow, Toledo remained a major cultural hub and even served as the capital of Spain until it peaked in both its population growth and political importance and the capital eventually relocated to Spain. Toledo’s political decline is likely what saved the city, however — for it allowed for the preservation of the city as it was largely forgotten about by the outside world. 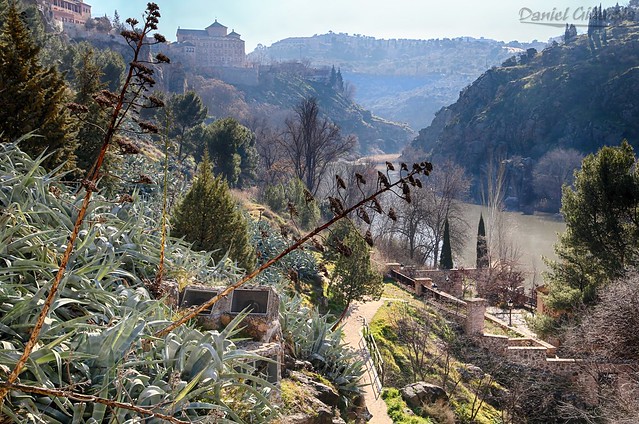 The cultural history is reflected throughout the city’s architecture. Medieval works are found in the roads, walls, and castles, such as the Castillo de San Servando. Morrish roots are revealed in several mosques and the Toledo Cathedral, dating back to the 13th century, displays the city’s Roman Catholic history and is one of the best examples of Gothic architecture in all of Spain.  Museums are found throughout the city, with the Museo de Santa Cruz and El Greco Museum showcasing some of the finest works of the famous artist, El Greco, a brilliant mind years ahead of his Spanish Renaissance counterparts who is regarded as a precursor of both Expressionism and Cubism. El Greco discarded the traditional artistic norms of form and replaced them with dramatic and colorful scenes that largely went unappreciated for centuries until the late 18th century.

Between the churches, museums, restaurants, and shops offered in Toledo you might expect to feel overwhelmed with options that couldn’t possibly be fit into a day-trip’s itinerary.  But you don’t have to see every museum and cathedral here to get the most of this place.  Just popping in and out of shops, walking through the tight pebbly alleyways, and marveling at the gold and brown bricked buildings — their potted plants hanging from elegantly designed Juliet balconies below their ceramic tiled roofs — will keep you captivated for hours. 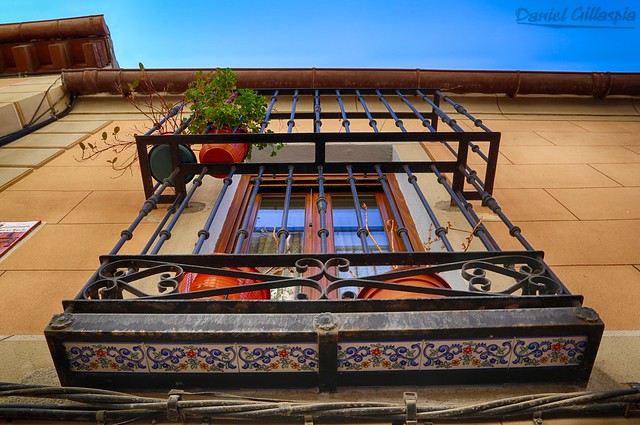 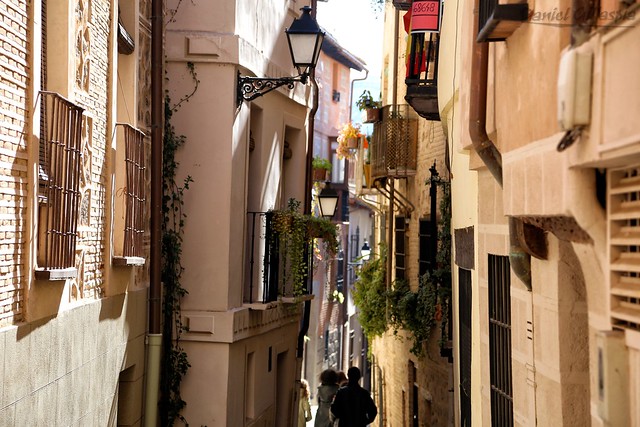 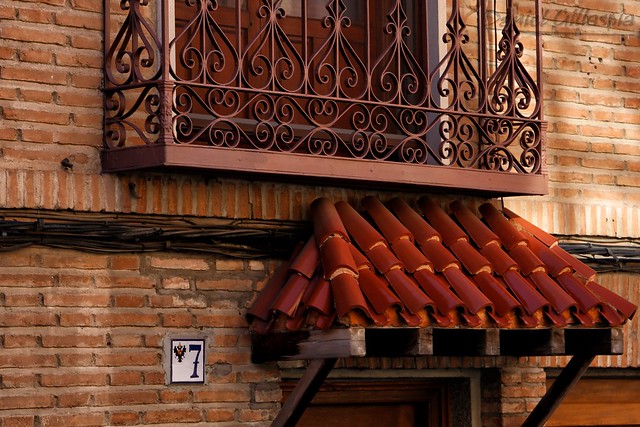 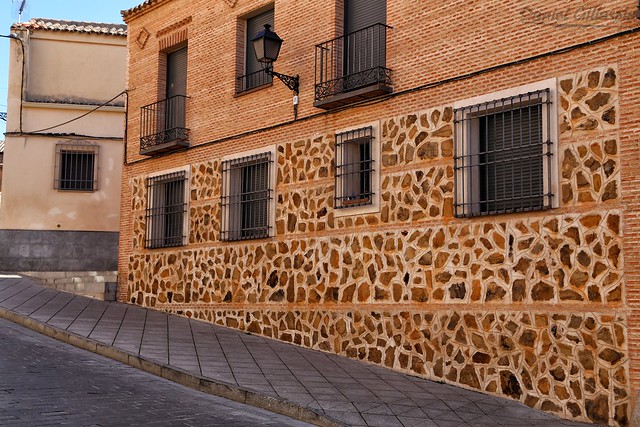 As soon as your feet begin to tire from trekking up and down these hilly paths, it’s time to slip into one of the many cafes or restaurants found amid the labyrinth of roads.  Toledo’s long been heralded for the variety of game meat and it’s easy to find the likes of quail, deer, or lamb in a number of different forms from fried, roasted, to baked.  And of course pork and plenty of seafood paella dish options abound at just about every corner. Just try to save some room for dessert. 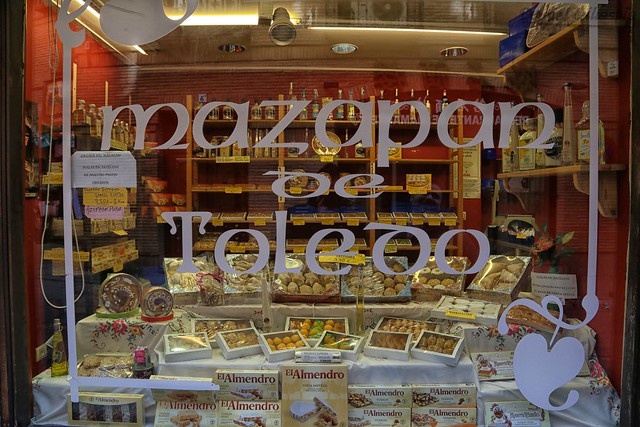 Bakeries are found throughout the city with boxes and rows of different sweets and treats presented in bright displays behind their windows, but without a doubt the most coveted of the sweets here — that every visitor to Toledo must try — is the marzipan. It’s a rich treat, made mostly of sugar, honey, and almond meal. It’s not uncommon to see marzipan in a number of different designs taking the shape of pigs or combined with fruit flavors and coming in the shape of small watermelons or bananas. It tastes extremely rich and filling, even in small doses, so taking it to go right after a big lunch may be your best bet. 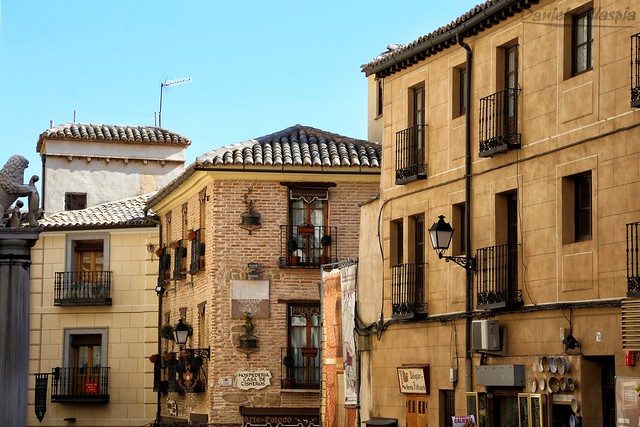 After a few meals and exploring the many shops and cathedrals, at some point you’ll surely make your way to the highest point in the city where the Alcázar rises above the city. The Romans used it as a palace back in the third century, though it underwent several changes through the centuries including a restoration in the 16th century.  In the 1930s, this is where the Siege of the Alcázar took place, which was an important victory for the Nationalist forces in the beginning of the Spanish Civil War. The Nationalists saw the Alcázar as a structure that symbolized the strength of Spain and thus their victory helped propel morale and further confidence in their forces as they ultimately went on to defeat the Spanish Republicans in the war. 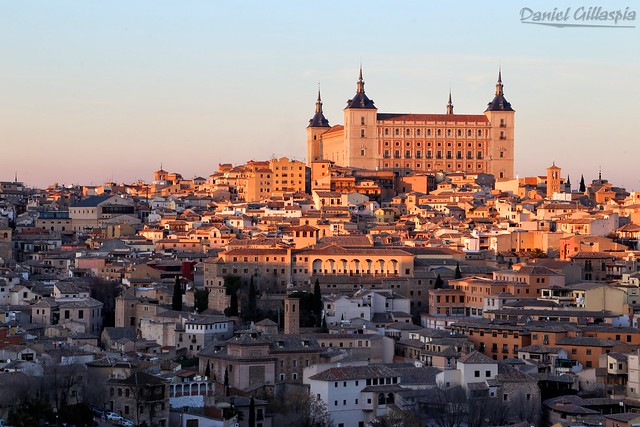 Today, Toledo is the capital of the autonomous region of Castilla-La Mancha. Since being designated a world heritage site and being home to several national monuments, Toledo has become relevant once again and thrives on the many tourists it welcomes each year. You likely you won’t be able to escape the tourist herds when you visit Toledo but this city is one of those unique places where the rich history that’s felt as you wander about the magnificent buildings displaces any annoyances that typically come with tourist territory. It’s a special place, no doubt, and one that will leave a lasting impression on you after even only one long afternoon visit.

Click here to book a day trip to Toledo from Madrid.