Once the tallest structure in the world, now the Eiffel Tower stands out as probably the most recognizable tower in the world. You can see the tower from just about anywhere in central Paris and for travelers it serves as a constant reminder that “you’ve made it” (to Paris at least). Admiring the tower from afar or even up close is good enough for many. But for others, going inside the tower is an irresistible experience. Visiting the Eiffel Tower itself is a relatively straightforward process. You wait in line, buy your tickets, and then go up and down the elevator or stairs. However, there are a couple of things you may want to take into consideration when planning your visit to the Tower. Here are five bits of information for making your visit to the tower a good one.

A ticket to get to the top of the tower via the elevator is €15 per adult (less for students and children).

To get to the second deck via the elevator it’s only €9.

To get to the second deck via the stairs it’s only €5. 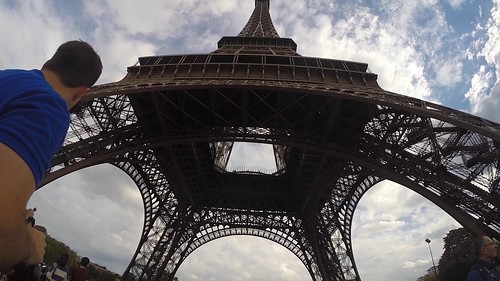 You can beat the lines by reserving your visit online. The only problem is that you usually have to make this booking about one to two months in advance! That means you’ll have no idea what the weather will be like on the day you choose to visit. Still, it may be better to play the odds with the weather and not have to worry about standing in line.

Another way to beat the line, or at least mitigate the damage of time standing in line would be to get in line about 30-40 minutes before opening or to go at night (at a risk). If you arrive before opening, the line will start picking up about 30 to 40 minutes before opening so make sure that you are there extra early. You can always buy some coffee and crepes from a nearby cafe to appease your appetite while you wait. Be careful about going at night, however. The reason is that sometimes they will close the elevators due to a high capacity of visitors or even worse they may close off admissions entirely if too many visitors are coming in. So while the night time may offer great views and potentially shorter crowds, that comes at the risk of not being able to enter the tower at all.

The photos below show the difference in the crowd from a 5pm on a Saturday and about 45 minutes before opening on a Monday.

Finally, in addition to going at the tight time, a way to beat the lines is just to take a hike up the steps. Many feel this is the most rewarding way to view the tower. Not only do you save money (and likely waiting time), you get a more intimate experience as you make your way up the tower step by step.

Remember though, while you’ll be entering into a shorter line you’re going to have to climb a good enough amount of stairs (about 600) to get to that second level. If you’re in decent shape this shouldn’t be a big problem but if mobility is somewhat of an issue for you then I recommend you looking into the elevator route. Also, not to be ignored is that those with extreme fear of heights may struggle a bit due to the exposed sights below. While you are barricaded in by steel and fencing, you can see right through the stairs and surrounding structures on your way up and that may induce a little bit of vertigo in some, so just be mindful of that.

If you decide to go the elevator route you may be a bit surprised by the smoothness of these machines. They seem to almost float up to their next floor. While they can get a little stuffed with visitors, I think the employees do a good job of not squishing a ridiculous amount of people in the elevator at once. After you switch elevators on the second deck to get to the top, the speed picks up as you ascend hundreds of feet and before you know it you are at the top. If I had to grade the elevator experience I would give it an A+, and coming from a claustrophobic guy that’s saying a lot.

3. Is the view from the top worth the extra money?

I hear a lot of people ask this question. I have to say that personally I do think that it’s worth it but it’s really a matter of personal preference. Paris is such a beautiful city and a lot of that comes from the amazing symmetry of the architecture and the layout of the parks, monuments, and streets. You can definitely appreciate this at the second level. However, seeing the city from the top of the city just adds “emphasis” to this fact. Check out the photos below to see the difference in the view in terms of being able to appreciate the full-scale of the city’s symmetry. For some, the difference may be negligible but for me, I appreciated the enhanced perspective.

The other reason for wanting to go to the top is just to say that you were at the top. For me this was the primary reason. Much like going to the top of the Empire State Building, traveling to the top of the tallest structure in Paris is just a cool experience and offers a bit more “bragging rights,” especially if you are willing to add the extra cherry on top with a €10 “glass” of champagne. (Note: the “bar” at the top is really just a walk-up bar where you grab your glass and go so don’t expect an elaborate set-up.) 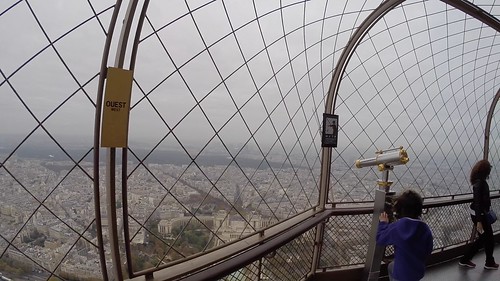 I realize that bragging rights and pricey champagne may not be important to everyone and if it’s not then you will not feel cheated one bit from just visiting the second level of the tower. The views are still sweeping and for some arguably better. Remember, this area of Paris isn’t full of high-rises. Thus, a higher vantage point won’t necessarily improve your sights of many of the four and five story buildings. So while you can appreciate the full scale of the city’s symmetry better from above, that may come at the expense of missing some of the fine detail of the buildings from the second deck. For that reason, the second deck has it’s own advantages and you should stop and check out that view even if you are primarily interested in the view from the summit. 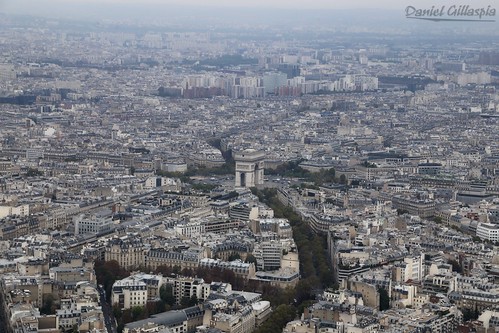 So I guess the answer to which view is better or more worth the money is that you truly can’t go wrong with either choice. And just in case you were wondering, no you cannot walk up the stairs to the very top of the Tower. While such a workout would be unforgettable, they only allow you to access up to the second level via the stairs.

4. Scammers and souvenirs – $ave your money!

Avoid the scams in and around the Eiffel Tower area! There are basically two ways you may get scammed. One are these Romanian Gypsies who wander around asking you to donate to some deaf and blind “charity.” They will approach you asking if you speak English and if you answer in the affirmative then you will become fresh meat in their eyes and they will try to pressure you to “just sign your name” and then donate. They usually have about four or five names on their little sign-up sheets already marked to try to entice you to donate, but don’t fall for it.

After I caught on to their game, I purposely answered one that I spoke English just to take another look at their sign-up sheet. My suspicion was that all of the previous donators were written in the same handwriting. After getting one of the scammers back over to me, I quickly saw that I was right. All four individuals had their names written down in the same exact handwriting! I didn’t really need confirmation on these scammers, but it was interesting to see how little effort apparently goes into their game on that end.

The other potential scams are the folks selling Eiffel Tower models out on the sidewalks. They are mostly African and usually have a big bunch of metal tower models in three or four different sizes attached on a ring. They aren’t scammers per se, but they will try to get you for your money. They sell Eiffel Tower models for about €10 that easily sell for €2-3 in the nearby souvenir shops. So my advice is not to buy from these people unless you bargain them down to about 25% of their offering price or unless you are just feeling particularly generous with your money.

On that same note, I recommend you spend as little as possible at the souvenir shops inside the Tower. I have to admit, I bought the “official” Eiffel Tower model from one of the shops inside the Tower just because I couldn’t resist, but I don’t recommend you buying a bunch of little items like magnets because you can pay about half the price for those at nearby souvenir shops and little kiosks around the streets.

Overall, the visit to the Eiffel Tower is pretty straight forward and shouldn’t pose any problems for you. I think the main thing is to catch the tower before it opens because the lines underneath get out-of-control and that is your only sure way of being guarantied admission without pre-booking months in advance. Also, be careful when purchasing souvenirs from the street vendors and the souvenir shops because you can easily save 50% by just being patient and buying from nearby shops.

That’s it for now. Enjoy your time in Paris!