There are actually many “love lock” bridges in Paris, though two of them stand out amongst the rest. The “Pont de l’Archeveche,” is located just next door to the Notre Dame Cathedral while the “Pont des Arts” is located just outside the Louvre. Tourists often engrave or write their names on locks and then attach these locks to the bridges in an effort to symbolize their love for eachother. Some even go so far as to throwing their key into the Seine River to put a stamp on their eternal desire to be together. Lately, there’s been talk about banning this practice, as the weight from the locks has actually collapsed portions of the bridge and the cumulative effect of the discarded keys has been detrimental to the river’s environment.

For now, placing locks along these bridges is still an on-going tourist attraction. Here’s a look at some things to consider if you are planning on taking part in this “tradition” upon your visit to Paris.

There’s nothing historical or “Parisian” about this practice

There’s nothing enduring about this “tradition.” Local reports state this practice began around the mid-2000s. That’s right, not 2,000 years ago, but something closer to about eight years ago. Also, the majority of Parisians seem to attribute this new practice to tourists and not anything distinctly rooted in any tradition or ritual of Paris. Thus, placing these locks on these bridges is pretty much a modern tourist invention (with roots dating back to a WWI Serbian tale). So while the idea is cool in theory, just know that you’re not engaging in some sort of renowned Parisian act of romance as many visitors think they are. 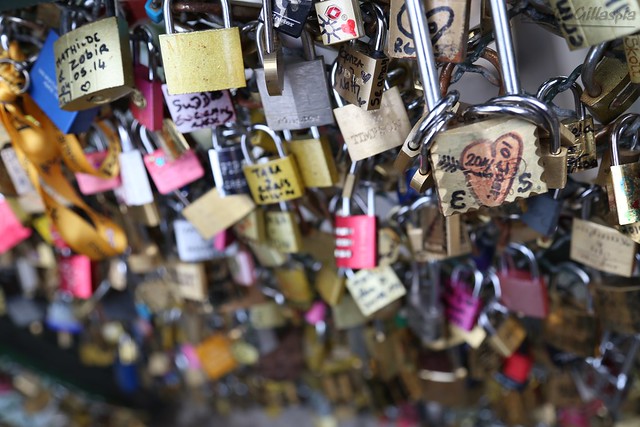 The locks are getting out of control and damaging the bridges

These locks are now starting to exceed the holding capacity of the bridge due to their weight. When you see the bridge, you’ll see locks locked onto locks locked onto locks. Some of these locks are completely obnoxious and about as big as laptops. One look at the insane amount of locks on the bridges now and it’s easy to see how these locks are starting to get out of control. In fact, in June of 2014 a portion of the bridge’s fencing (where the locks are attached) actually collapsed. Just before we arrived in October 2014, some officials from the city actually placed boards over some areas to protect the bridge. To be honest, the boards look like crap and all of the writing on the boards don’t help the eyesore that they have become. 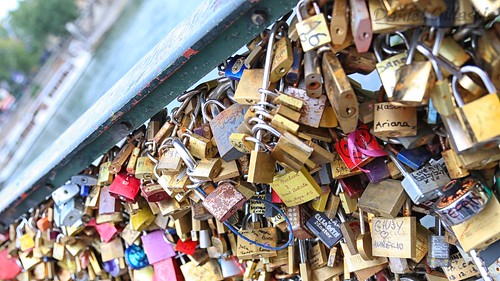 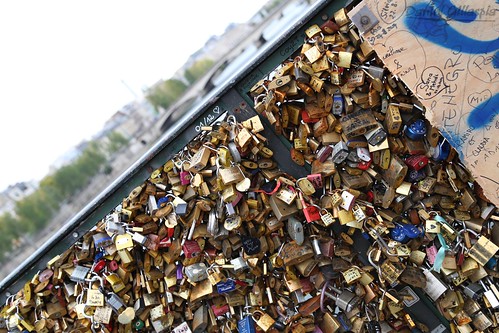 It’s too bad that this kind of thing doesn’t work out because unlike some who oppose this practice, I actually think that the locks on the bridge look pretty cool and some are pretty creative. Unfortunately, I’m not sure that there’s an option where you can allow tourists to attach padlocks onto a bridge without it getting out of control pretty quickly. It’s just not sustainable. Perhaps this kind of thing could work somewhere where it would be difficult to access the location where the locks are to be attached… like the top of a mountain peak. But with millions of visitors pouring in each year over these bridges, it simply will never workout in the long-term without damaging the local landscape. 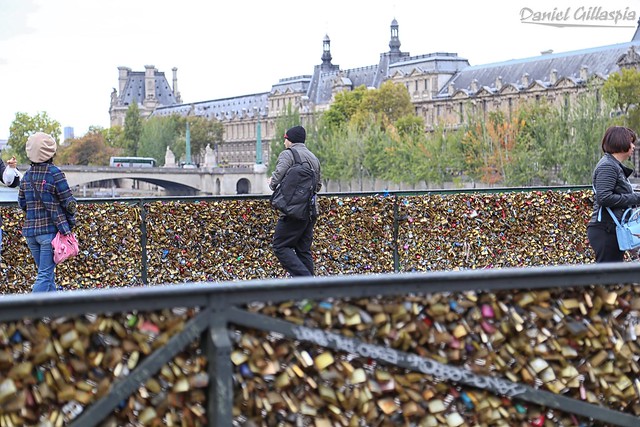 To alleviate this issue, Paris recently initiated an effort, dubbed #lovewithoutlocks, to encourage visitors to take selfies in front of the locks now. I don’t see that doing much considering that websites still encourage tourists to bring their custom-engraved locks to the bridge. Moreover, there are even local vendors on the bridges selling locks to tourists. Obviously, there is still a ways to go if city officials want tourists to receive a consistent message that this is no longer welcomed. And because of the mixed-messages out there, I can’t really blame a lot of visitors for not realizing that so many others seriously object to the practice and find the locks a nuisance.

Our personal decision not to place a lock on the bridge

After researching more into the issues facing the bridge, Brad and I decided not to place a lock on the bridge. While there was still quite a bit of open room on some of the outer areas of the bridge, I didn’t feel like the bridge needed another lock from us. My reasons were both idealogical and environmental. I just don’t see romantic love properly manifested in a padlock attached to a bridge with the key thrown away. To me, what makes love so great is the risk involved. The risk that you’re partaking in something in which you ultimately have no control over the final outcome. It’s just that risk that brings in such a great reward. I understand that not everyone feels that way about romantic love and that’s fine, of course. But for me, the idea of something akin to a shackle symbolizing romance just didn’t jive with me. Add in the fact that it’s harming the environment and landmarks and you can see why I didn’t partake.

I understand that many are probably more interested in doing this for the nostalgia than for an actual symbolic statement of their never-ending love and I totally get it. You come to Paris, the city of romance, and you and your partner leave a small piece of yourselves there and five or ten years you come back and see that same enduring marker of your visit and feel all warm and fuzzy on the inside. However, my suggestion is to just stick with photographs. Take some selfies of you and your lover at the bridge and be satisfied with that memory. Remember, it’s pretty selfish to add to the destruction of a landmark for your own want of nostalgia. 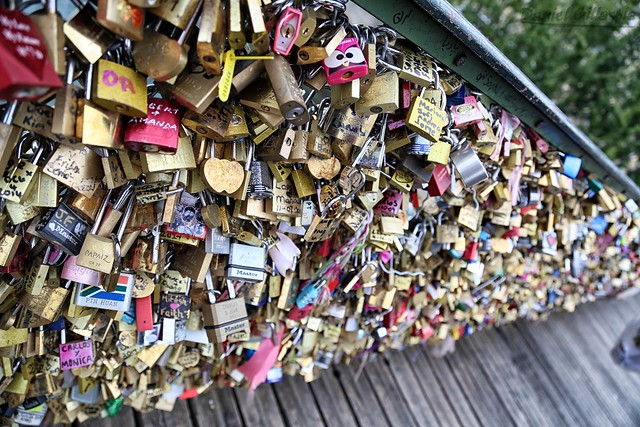 However, if you are absolutely determined to put a lock on the bridge then please just don’t throw your key into the river. They estimate that over 700,000 locks are on these bridges and you can just imagine the environmental impact of so many thousands of keys rusting away in the riverbed. And it’s not like this is the River Thames. No offense, London, I really love you, and the Thames is pretty in it’s own way. But rivers like the Thames already look like they’ve dealt with their fare share of rust issues over the decades (though the Thames is said to be one of the cleanest rivers running through a major city). On the other hand, a beautiful green river like the Seine should be preserved as much as possible and it’s not hard to see how after a few years its beauty could be compromised from hundreds of thousands of deteriorating keys.

I hope this post doesn’t rain too much on your parade if you were looking forward to placing your own lock on the bridge. I try to focus on more positive aspects of travel and I know that this post is more on the negative side. I just wanted to help get the word out there that this practice is doing some harm to these areas and that we should think about the cumulative, long-term effects of doing even the most simple things like attaching a small lock to a bridge and tossing a key into a river.