The toll system in Portugal is still a little confusing to me even after going through it this past spring in 2015. I heard from numerous sources that there were different rates and ways to pay while planning our trip yet when we arrived to rent our car it seemed that a lot of that information was wrong.

So here’s what you can expect when renting a car while trying to get from Lisbon to the Algarve.

Renting a car at Lisbon Airport

First thing is renting the car. We found the rental procedure at Lisbon Airport to be pretty straight forward. We went with Avis and the staff for them was very helpful and spoke pretty good English so there weren’t really any hiccups in the process.

Also, for Avis, we didn’t have to take a shuttle or anything to get our car because the garage is right there by the airport so that was nice and that appears to be the same for other car rental companies.

When renting your car with Avis be sure to tell them that you want the transponder in your car.

I recall there being a small fee for having the transponder put into the car and a small daily fee as well but from my understanding the alternative routes for paying would’ve been to find some random post offices or pay shops to pay the tolls or some other means that we weren’t fully clear on.

The only thing we were clear on was that the transponder would allow us to be charged as we travelled and then we would pay one final fee at the end (though the bill takes about a month to hit your credit card). Thus, going with the transponder seemed like the most convenient way for dealing with the tolls.

Note: There may be easier ways for you depending on your routes and destinations, but I’m simply stating what worked for us to get us from Lisbon to the Algarve in a relatively simple way. Quite frankly, every other way of paying sounded like a headache compared to this way.

How exactly do all the tolls work?

While we understood how we would pay for what we would be charged, I still wasn’t clear on how all of the tolls worked. When I asked Avis how much we should expect to pay, the staff member just told me that it ranged from like €1-€20 — a pretty drastic range.

When I pressed with more questions, she attempted to explain how it all worked but it wasn’t really getting across. It ended up being one of those slightly awkward scenarios where you just kind of act like you understand what the person is telling you for the sake of moving on to your next destination. 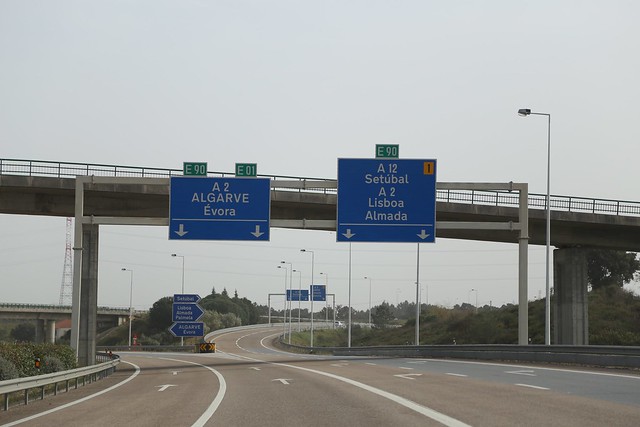 Once you get your car you want to think about your route and how the tolls are going to add up for you. I’m pretty sure that each toll works in a different way depending on your location.

(I think this is how it works based on how we were charged, so you might want to make sure for yourself.)

Here’s a helpful link with a breakdown of charges you can expect on major routes.

You should be able to see the toll fee light up on the screen as you pass through but not every toll showed the total. Also, if you go the transponder route you’ll pass through the lanes on the left, under the green “V” signs each time. I’m not sure how the other lanes work at all. 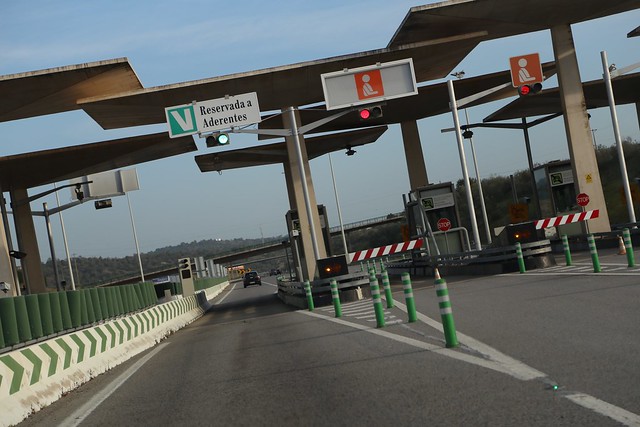 Getting from Lisbon to the Algarve via Highway A2

If you travel straight from Lisbon to the Algarve via A2 you should expect to be charged right around €20!

To get to the Algarve from Lisbon we took the A2/E1 highway, which is one of the most popular toll highways. We knew we would be getting charged but we didn’t realize it would be about €20!

The alternative to taking the A2 highway is to jump on the IC1 (on the west) but when we input that route into our GPS it added almost 2 hours to our route.

Whether that was accurate or not we were a bit short on time and sunlight so we opted to take the quickest route to get to the Algarve. 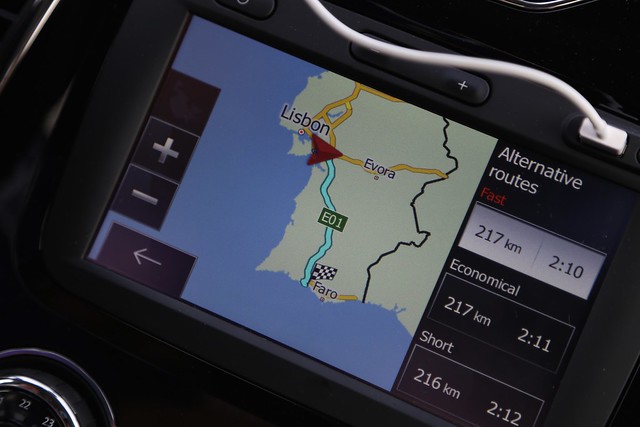 While the tolls can be a bit confusing and stressful the good news is that the drive down to the Algarve is a very scenic drive even on the A2.

I suspect that the smaller highways may have been a bit more scenic but I can’t verify that. If you’ve never driven in Portugal be prepared for a lot of people speeding down the interstate in their little cars.

We didn’t have any major issues with them but you’re bound to come across several of these people who fly by at reckless speeds and never use their blinkers (turn signals).

Tolls on the A22 Road in the Algarve

So once we arrived to the Algarve we jumped from town to town for the weekend.

We decided to use the A22 road (the toll road of the Algarve) instead of the free highway that runs roughly parallel to that road for the same reason as before: we were trying to see a lot of different spots in a short amount of time and the alternative route would’ve cost us a couple of hours overall of driving time.

Also, I was told that the free highway was poorly maintained and even worse, poorly marked, making it much more difficult to navigate so consider that.

I believe that the tolls on the A22 work differently than on the E1. These tolls charge you flat fees as you pass through their gates that are much cheaper and range from €0,50 to €2,00.

How much do the tolls cost to travel from Lisbon to the Algarve roundtrip?

The final amount we were charged was: €55.

Keep in mind that this included the round trip from Lisbon to the Algarve and also several trips hopping around the different beaches and towns in the Algarve for a couple of days.

The one drawback to the transponder is that you are putting trust in the rental company to get your charges correct. Apparently, there are stories of people getting screwed over by the car companies but I don’t think that happened in our case.

I think it was safe to assume that we were charged correctly and I only would’ve questioned the charge if it had been a pretty outrageous number. Still, it’d be a good idea to calculate a rough estimate before you get charged so you can get a sense of what you will be paying.

Again, I can’t say for sure how all of the different tolls work in Portugal. It is a bit confusing and a bit stressful for outsiders to deal with. However, if you are planning on traveling from Lisbon to  the Algarve then I highly suggest that you go with the transponder and expect to pay around what we payed for a couple of days worth of exploring.

Now that you know how the tolls work in Portugal be sure to check out the best sea cave tour in the Algarve and also where to eat in the Algarve!