Here’s the thing, if you’re wanting to be within walking distance of City Centre in Oxford this is not the hotel for you. It will take about 10 minutes to drive into the City Centre from the hotel depending on the traffic. The Oxford Hotel is very close to one of the park and ride busses, however. And if it’s your first time coming to Oxford, I highly recommend the park and ride because parking is ridiculous to find in the city! One good thing about the hotel is that parking is free and there were plenty of open spaces for all of the cars while we were there.

The front desk was excellent and we were treated very well. Also, at the bar and restaurant the staff was very courteous as well. Some of the servers seemed to not have a very good grasp on English but it wasn’t anything that couldn’t be overcome with a little bit of gesturing.

The room, bathroom, sheets, etc. were clean but not in great condition. There were some small but noticeable cracks  along the counter where the sink connected and so while the room was clean, it didn’t feel quite as pristine because of that condition. Other than that everything was just fine.

The double room was a bit small but for UK standards it was definitely acceptable. There was no refrigerator or microwave in the room which was a bit of a bummer but there was a desk and a small tv in there. The window shades did a great job of blacking out the sun, which was nice and there was also a heater which came in handy. The bed was a bit firm but still pretty comfortable and as stated the sheets and blankets were clean. 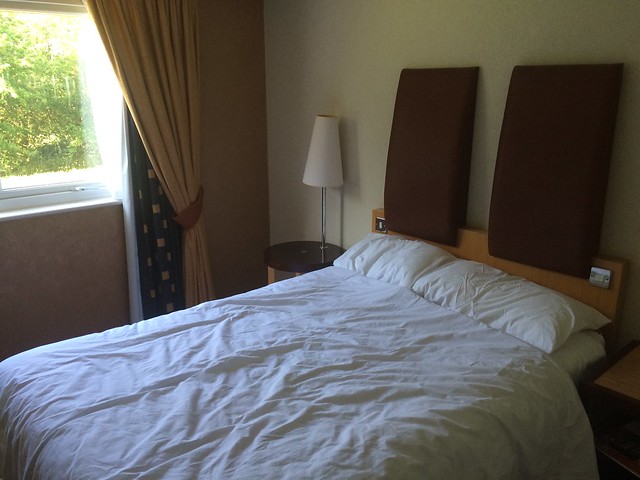 The free internet was very slow and there was pretty much no point in even attempting to use it because I couldn’t get anything done on it. We luckily were upgraded to the faster internet for free but even that internet connection was pretty bad. So if you’re in need of a good wifi connection, make sure you upgrade and hopefully your connection will be a little better than ours was. 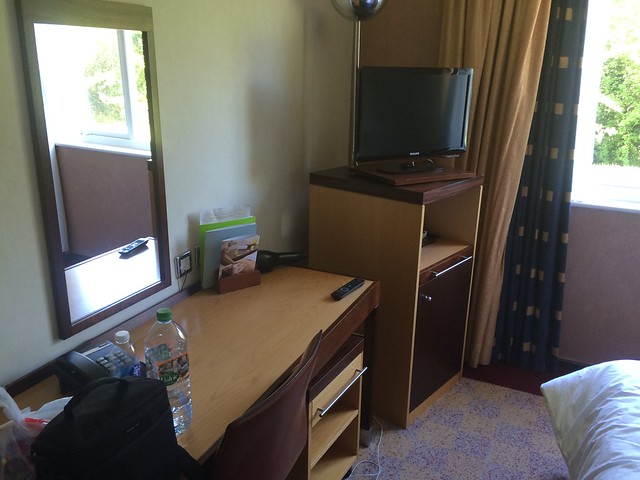 Bang for buck: A-

Overall, the room didn’t blow me away but for the price it was a good deal. I enjoyed the drinks at the bar and the food at the cafe wasn’t bad either. My only real complaint would be the internet speed – hopefully that was just a one time thing. Other than that, I can’t complain too much and for about $140/night I think we got pretty good worth for the money we spent.