Also known as the Lillian Coit Memorial Tower, Coit Tower, rises 210-feet and sits atop Telegraph Hill in San Francisco, California. The tower was built back in 1933 after Lillie Hitchcock Coit donated 1/3 of her estate to beautification efforts of San Francisco. The eccentric Lillie Coit was a bit of a rebel in her time. Back in the late 1800s, she smoked, gambled, and wore trousers before such things were ever socially acceptable for a woman. Her cavalier ways eventually wound up leading her to join in with local firefighter efforts, Knickerbocker Engine Co. No. 5 to be precise. She’d ride along on calls, accompany them in parades, and actually became an honorary firefighter and a mascot of sorts.

Coit’s bequest of 1/3 of her estate amounted to $118,000 and two memorials were built in her name. One was a sculpture of three firemen (found in Washington Square) and another was Coit Tower. The architect behind the tower was Arthur Brown, Jr. and it took a total of five years to complete the construction of the tower. Some people believe that Coit Tower was designed to resemble a nozzle of a fire hose, but it’s been said that the resemblance is nothing more than a coincidence.

Inside of the tower there are several murals to check out, most of which were commissioned by the Public Works of Art Project back in the 1930s as part of the New Deal employment program for artists. The murals depict racial equality as well as issues related to capitalism, labor, and finance. There were over 25 artists who worked to produce these art pieces. Many of these frescoes were considered radical back in the 1930s and a great deal of violence actually broke out due to protests over the artworks. The tower had to be locked up for some time until the violence died down and though it reopened months later, some of the controversial paintings were painted over.

As you approach the entrance of the tower you’ll notice several trails winding around Pioneer Park, the park that surrounds Coit Tower. Try to take a little time to wander through these trails and see if you can catch a glimpse or at least some sounds of the local inhabitants — a flock of wild parrots. (There’s actually a film about these parrots called The Wild Parrots of Telegraph Hill.) The parrots got to this area back in the early 1900s when it was legal to import wild parrots into the US and the birds were brought over from South and Central America by the millions. Most of them are cherry-headed conures, though there are some other types that show up from time to time.

The view from the observation deck inside the tower is one of the best views of the San Francisco Bay Area. The observation deck affords a 360 degree view of the entire city and surrounding bay. The only issue with getting photographs is that the windows are a bit narrow and since there is such thick concrete barriers between each window, it’s a bit difficult to capture wide-angle shots or panoramic photos. Still, there are some great views to be seen from this tower. You’ll be able to see a close up of the iconic San Francisco skyline, the Golden Gate Bridge, the Bay Bridge, Alcatraz, and the East Bay. 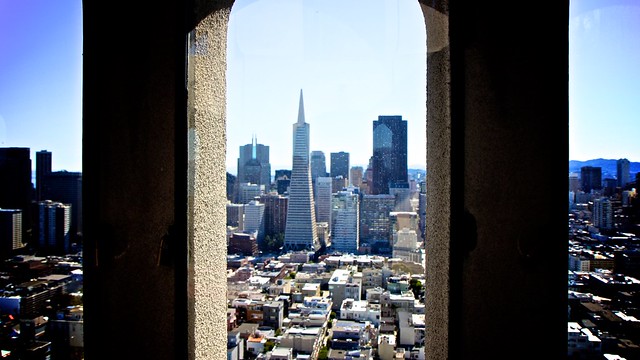 One thing that surprised me when we visited was that the top of the tower is open and exposed. This could obviously be a problem if it was raining so you want to keep an eye out on the forecast and try to get out there on a clear day. 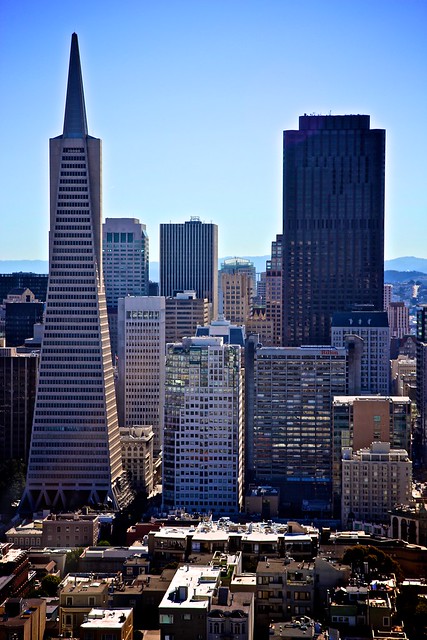 An elevator ride will get you to the top so you don’t have to worry about taking tons of stairs, although you will have to take some stairs. Sometimes during busy weekends this line can get a little long and move along quite slowly so be prepared for that. There’s also a small gift shop at the bottom of the tower (where you purchase your elevator tickets) so you can check that out — it’s also where the murals are located.

Tickets for adults are $6 for California residents and $8 for non-residents. If you read through the reviews online you’ll see that an appreciable amount of people don’t think the $6-8 is worth it. I happen to think that it was worth the money for the simple fact that the view is great and it’s an iconic tower of the city and I just enjoy trekking to the top of these type of structures. I think a $5 charge might be a little bit more in line with expectations but I didn’t mind shelling out just a couple of extra bucks for the experience.

The tower is open from 10am to 6 pm May through October and 10-am to 5pm from November to April. Parking on the tower is limited so if you’re planning on visiting during a busy weekend you will probably struggle to find a place to park and be forced to wait in an outrageous line. For that reason, my advice is to get there early or simply try to visit during a week. Or you can also look into taking Muni’s #39 Coit bus that runs between Fisherman’s Wharf and Coit Tower.  Finally, if you’re traveling by foot and in the mood for a little bit of exercise then try to access the tower via the Filbert Street stairs on the eastern slope of the hill.