We recently had the privilege of trying some of the Chi-Town classics like deep-dish pizza and Chicago dogs on our latest trip to the Windy City. I’d never tried deep-dish pizza or a Chicago dog before so I couldn’t wait to be officially introduced to these novelty foods while in Chicago. While there, we also stopped by a famous BBQ place and a little donut shop that still leaves my mouth watering just thinking about it. So here’s the Food Report for some places to eat in Chicago.

Giordanos, along with Gino’s East, is one of the places that you must go to for Chicago deep-dish style pizza — you’ll find their names on just about every list of deep dish pizza restaurants in Chicago. (We wanted to try out both restaurants to compare the two but it just didn’t happen.)

Giordanos will almost certainly have a long wait if you are visiting Chicago on a weekend or during a holiday but you can reduce your wait time by doing two things. One, try to arrive in between lunch and dinner around 3 to 4 pm, and you’ll likely beat the evening crowds. Second, you’ll want to pre-order your pizza after you check-in. This will save you the time it takes to be tended to by your waiter later on (which can sometimes be a long time.)

We arrived about 3:45 and had to wait about 30 minutes to get a table and considering it was Memorial Day weekend, I didn’t think that that was too bad. However, if you have a bigger party, odds are you’ll be waiting a bit longer as I heard some folks mentioning over an hour wait time.

We ordered a deep dish stuffed pepperoni pizza and while I enjoyed it there are a few things I have to say about it. For one, the deep dish pizza is put together like an upside down pizza (at least here it is). For example, they place the “toppings” on the bottom of the pizza and then cover them with a thick layer of cheese and then layer tomato sauce on top of the cheese. It was completely different from any pizza that I’d tried but I guess that’s how a “stuffed pizza” is properly done.

Tip:  if you’re a pepperoni fan, you may want to tell them 2X on the ‘roni because there weren’t very many “stuffed” in our pizza.

The second thing I have to say about the pizza isn’t so positive. That’s because when we were served our pizza, it was barely even warm (first world problems, I know). I wasn’t sure if that’s just how they do it in Chicago but by the time I worked through my first slice, everything else was already cold. The odd thing is that when we ordered delivery from Giordano’s the next night (everything else was closed around 10pm Sunday night), that pizza actually arrived hotter than the one we ordered inside the restaurant!

Thus, my suggestion is that if you don’t want to hassle with the lines, just order delivery. It’ll be just as good and might even be warmer. Plus, while it’s a cool experience to dine inside the restaurant, there’s nothing particularly unique about it (compared to a place like Gino’s).

We had to try a Chicago dog while there and we ended up trying one from Gold Coast Dogs. (Had I realized there was a Gold Coast Dogs in the airport at MDW, I would’ve probably tried another place and saved Gold Coast for right before we departed Chicago.) In any event, the Chicago dog didn’t disappoint.

I’d never tried one before since I’m not really a hot dog person and always thought Chicago dogs just looked ridiculous because they had a little too much going on with all of their toppings slopped all over the place. However, I was very pleased with our char dogs from Gold Coast and am now officially a fan of the Chicago dog without question.

It’s hard to pin down the flavor with so many things happening in your mouth but the sport peppers, mustard/lack-of-ketchup, and relish gave it a unique blend of tastes with just the right amount of kick that makes you feel satisfied, despite choosing a lowly hot dog for your meal. They also did a great job of charring the dog just the right amount of “char.” If your stomach’s really rumbling you may want to go with two of them or a single jumbo dog.

I’d read about this place having the best bbq in Chicago. And while I don’t know if that’s the case, it wouldn’t surprise me if it were true. As a native Texan, I know (and of course respect) quality BBQ and Smoque BBQ got a big two thumbs up from me.

We went with the chopped brisket with a side of the St. Louis style ribs along with macaroni and cole slaw. I’ve never cared for cole slaw so I didn’t dig into it too much but everything else was completely delicious. They brought out different bbq sauces and I loved all of them. I didn’t even realize the sauces were different until after I had mixed both together by drizzling them all over my meat so I’m not exactly sure what each one tastes like — I just know that they combined forces to produce one heck of a hybrid BBQ sauce that this Texan couldn’t get enough of. The only knock I had was that they didn’t have potato salad but the macaroni made up for that for me.

Before the restaurant even opens there’s a line forming outside but you can get around that by showing up about 15 minutes before they open. We got the “insider” tip from our Uber driver and just walked right in to the restaurant before they officially opened. Apparently, nobody else got the memo because we had already ordered, sat down, and filled up our drinks when a long trail of people entered, gawking at us two confusingly.

Although this place is about a 20 minute drive from Wrigley Field (with traffic), it’s on the north side so it’s a perfect place to load up with a heavy lunch before heading over to the Wrigley Field area, especially if you’re going to indulge in some adult beverages as many do.

We visited the Glazed and Infused locations tucked away inside the Raffaello Hotel, but there are several other locations around Chicago. The location we visited may be a bit smaller than the other shops so they might not have offered as many options as we could’ve found at other locations.

Their donuts are very rich and if you’re not very fond of sweets you might not be able to finish some of them. We had one of their chocolate donuts which was even more rich and chocolatey than expected. I’d put it on par with those ultra-sweet lava cakes they serve at restaurants that are infused with many forms of chocolatey goodness. 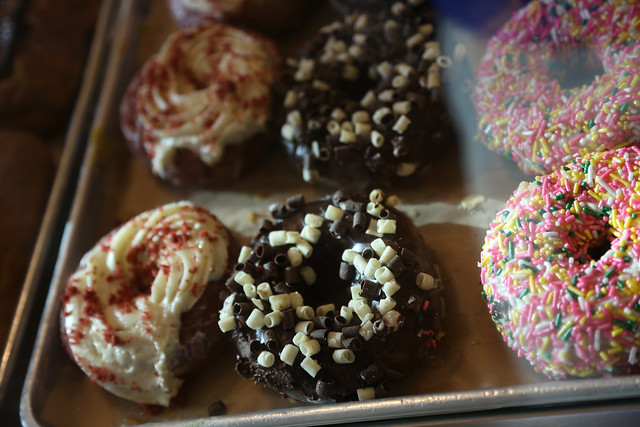 The red velvet donut was something I’d never had or even heard of for that matter. It’s topped with cream cheese, sprinkled with red velvet crumbs and is definitely one of the most memorable breakfast items I think I’ve ever tried.

I took turns alternating biting into each donut — a chocolate bite here and red velvet bite there. About midway through, I could feel the sugar coma becoming imminent and it was time to put the donuts away. Perhaps next time I’ll go with the mini donuts.

Obviously, Chicago has tons to offer in the food department and I can’t wait to get back to try out more places and properly experience the culinary scene. If you’re wanting to knock out some of the must-eat foods like deep dish pizza and a Chicago dog, I really don’t think you can go wrong with the above!