The Art Institute of Chicago is one of the premier art museums in the world and to some, it’s arguably the top art museum in the United States. The museum boasts several famous art pieces from some of the most legendary artists, such as Vincent van Gogh and Pablo Picasso. It’s definitely a top destination to see while in Chicago and so here’s a look at some of my favorite works I saw on my recent trip to the Art Institute of Chicago. 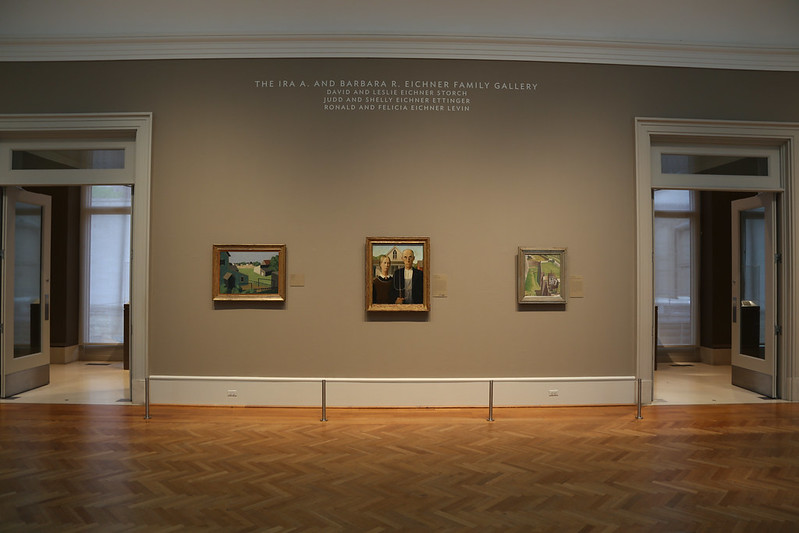 In 1930, Grant Wood was inspired by the “structural absurdity” of a Gothic-style window in such a “flimsy frame house” in Eldon, Iowa. He decided to paint people in front of the house who would be the “kind of people I fancied should live in that house.” So he turned to his sister and dentist to model as the subjects for the painting. There’s debate as to whether it’s a wife and husband depicted or father and daughter, but many believe that due to the age difference, it was meant to be the latter. 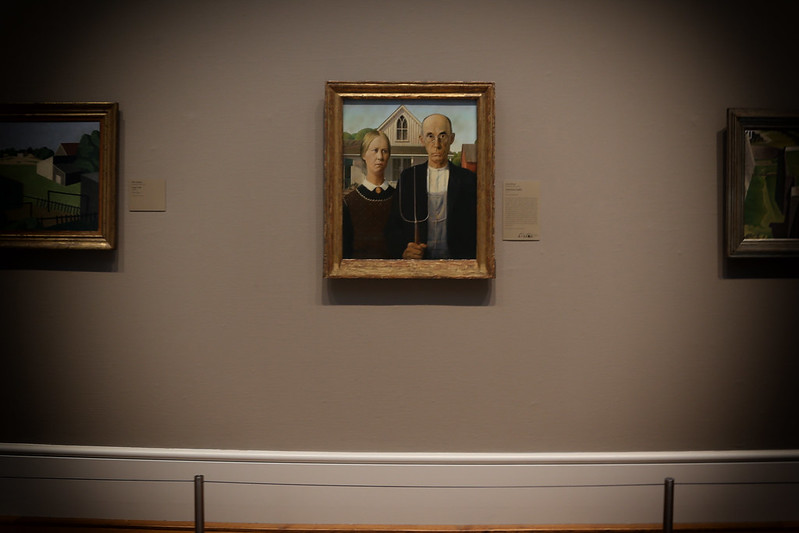 Wood entered his painting into a competition at the Art Institute of Chicago and earned the bronze medal and $300 cash prize. The painting then appeared in newspapers around the country, steadily gaining in popularity. Many midwesterners despised their depiction as “pinched, grim-faced, puritanical Bible-thumpers” but Wood stated this was not his intention at all. In fact, by living in Europe, Wood supposedly grew fonder of the Midwest and its simpler ways and was even quoted as saying “All the good ideas I’ve ever had came to me while I was milking a cow.”

Today, the painting still evokes an often-parodied, satirical interpretation of the rural ways of life but also signifies the American spirit to persevere through the tough times of the Great Depression. If you’re ever road tripping through Iowa, you can actually visit the house made famous by this painting.

Seurat used a technique known as “pointillism” to complete this renown masterpiece. Inspired by scientific research at the time, Seurat believed that by painting small dots of contrasting colors, he could produce the “boldest and purest” forms of colors that the human eye could perceive. This approach allowed Seurat to lead the neo-impressionism movement, where artists refined concepts of light and color in their works and implemented a new calculated approach to art that abandoned the spontaneity of the impressionists and consequently resulted in harsh criticism. The scientific theories with respect to luminosity and color on which the neo-impressionists relied were likely off-base, but their works nevertheless sparked a movement that caught on quickly. 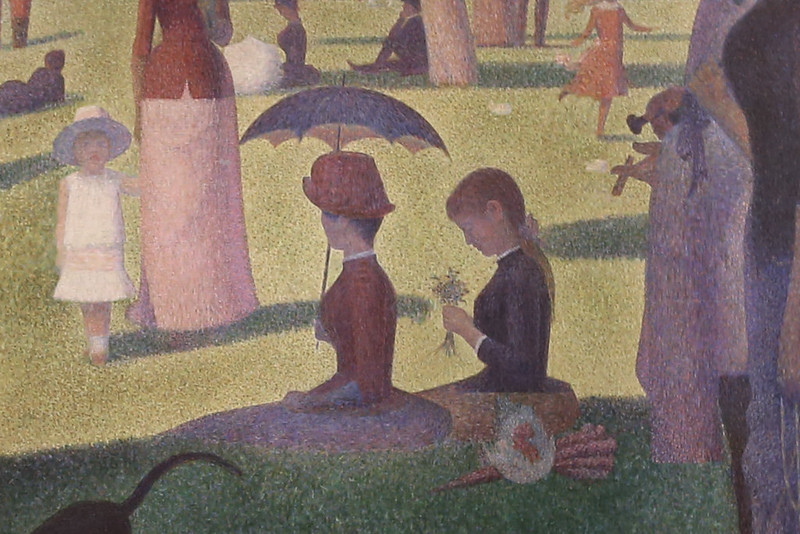 It took Seurat two years to complete this painting, which he finished at just the young age of 26. During those two years, he completed over 30 preliminary drawings and oil paintings, focusing meticulously on crafting the detailed landscape portrayed in the final work. There’s much debate over the interpretation of work but one of the most poignant interpretations comes from from Ernst Bloch:

“This picture is one single mosaic of boredom, a masterful rendering of the disappointed longing and the incongruities of a dolce far niente [idleness],” Bloch wrote. “The painting depicts a middle-class Sunday morning on an island in the Seine near Paris…despite the recreation going on there, seems to belong more to Hades than to a Sunday…The result is endless boredom, the little man’s hellish utopia of skirting the Sabbath and holding onto it too; his Sunday succeeds only as a bothersome must, not as a brief taste of the Promised Land.”

This is Gustave Caillebotte’s most famous piece and it depicts urban life in Paris at a newly built boulevard near an intersection called Place de Dublin. The painting is said to be inspired by photography and you can see this in many of the painting’s elements. There’s a shift in the sharpness of the figures and structures, which is meant to mimic the effect of a camera’s focus. Also, the center of the image appears to bulge and the man on the right is half-cropped out, much like you might find in a photograph. Finally, the image is composed almost like a snapshot of a street scene, although Gustave is said to have spent months crafting this scene.

The Old Guitarist came near the end of Pablo Picasso’s “blue period.” Affected by the suicide of a close friend, this was a period where Picasso focused on the downtrodden and the misery of the impoverished. This particular painting captures the sorrowful theme with its monochromatic color scheme and slumped guitarist figure who appears sickly and perhaps blind and close to death. The sole contrast in color is the guitar, which is said to symbolize the life and meaning brought to the impoverished by art, or conversely, the solitude that is often the life of an artist.

Many people aren’t aware, but there are several hidden images within The Old Guitarist. Most prominently, there’s a woman hidden hauntingly behind the neck area of the guitarist. You can faintly make out some of her facial features with the naked eye, such as her jaw line and eyes but it took x-ray and infrared technology to uncover her full details.

In addition to the woman, they discovered a bull and a calf and a small child in the background — the same scene described to a friend by Picasso in a 1903 letter. Some experts believe that there could even be another scene depicted, meaning that two different paintings may lie beneath The Old Guitarist.

A few other works of Picasso are below.

From 1888 to 1889, Vincent van Gogh created three versions of one of his most renown paintings. He completed the first version just after moving into his “Yellow House” in 1888. However, after water damage threatened the preservation of his first work, he decided to paint another version, although this time he would be painting from the confines of the asylum in Saint-Rémy. Van Gogh’s smaller third version (housed in the Musée d’Orsay in Paris), was given as a gift to his mother and sister only a few weeks after creating the second version.

Van Gogh lived in 37 places in his 37 years, often living with friends, his parents, or in small rooms above cafes but never had a place to call his own.  To many, this painting of his bedroom signifies the importance and yearning van Gogh had for home. The colors are bright, evoking tranquil emotions and the details in the room, the paintings (van Gogh’s own work), furniture, and nightstand were meant to create a sense of welcoming for other artists. Interestingly, many of the original colors have gone through discoloration, making the originally purple walls and doors now appear blue.

Van Gogh took inspiration from a prior work of art when created The Drinkers. At a time when he lived in the asylum, van Gogh focused more on interpretation rather than creating his own works. He remade Honoré Daumier’s version (seen below) into his own. The “four stages of man” depict the cyclical nature of alcoholism and it’s thought that the green used by van Gogh is an allusion to absinthe, a drink that was well known at the time. 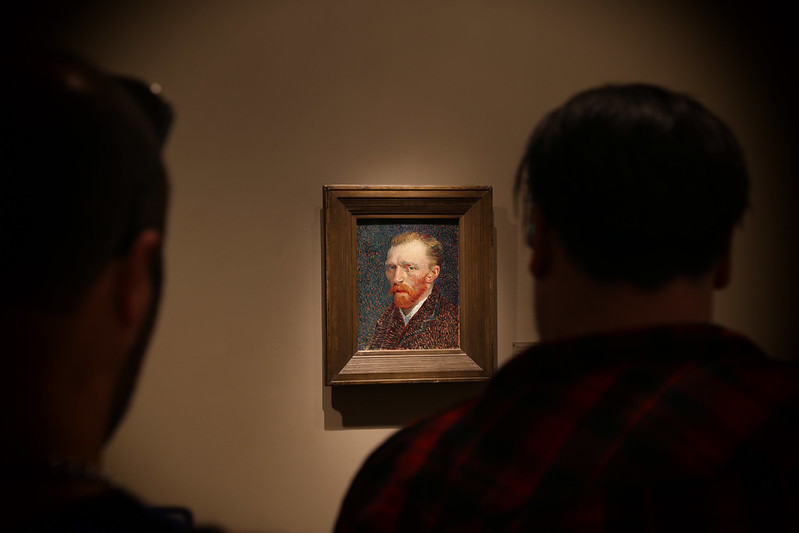 Van Gogh created many self-portraits but this one came early on, only a year after his first known published self-portrait in 1886. When van Gogh began painting self-portraits he adopted a style similar to Rembrandt but in as little time as a year, he’d shifted his direction to the Parisian avant-garde in favor of bright contrasting of complementary colors. Below, you can see how different the style is that Vincent van Gogh first adopted with one of his first ever known self-portraits.

These famous paintings are of course only the tip of the iceberg for what you can admire at the Art Institute of Chicago, but I try to limit my photography when I go into such renown museums to avoid disturbing others and to give myself time to relax and enjoy the art while I’m there. Even if you’re not a major fan of art, if you’re heading to Chicago, you should mark this down as a must-visit attraction, as not many museums offer you the chance to see so many renown works in one visit.