On our recent visit to Tokyo, we wanted to take part in memorable experiences unique to Japanese culture. So we booked a green tea ceremony, a food tour through the streets of Tokyo, and decided to try out a sushi making class and tour of the Tsukiji Fish Market. As I’m not a true sushi-eater I was a bit hesitant to go forward with the sushi class, but after giving it a try, I had zero regrets. Here’s a review of our experience and what you can expect if you book a Tsukiji Fish Market tour and Sushi making class in Tokyo, Japan.

Our day started with being picked picked up at our hotel in a large bus at around 8:30 AM. From there, we were taken to Hamamatsucho Bus Terminal where different tour companies congregate and begin their tours. Inside the bus terminal, it’s a bit of a mad house with a frenzy of people running around trying to make it to their busses and many others trying to find which table they need to sign-in at.

Despite the chaos, our bus driver introduced us to our tour guide who soon rounded us all up and led us to the subway station where we quickly travelled about 3 stops over to the Tsukiji fish market. Navigating the subway stations and narrow market alleys with throngs of people isn’t easy when you’re trying to keep a group together but our guide led us flag-in-hand making it easy to keep up. It felt a little awkward playing follow the leader through a major metropolitan area but other groups were doing the same thing and it seemed to be working so I couldn’t complain.

Our guide took care of our subway tickets so there was no need to purchase any tickets and we simply fed our tickets into the machine and went on our way. If it’s your first day in Tokyo, this can be a nice introduction to the subway system, which has to be one of the easiest I’ve ever navigated due to their simplified numbering system.

Once we made it to Tsukiji Station, it was time to explore the famous Tsukiji fish market. If you don’t now, it’s one of the biggest fish and seafood markets in the world and also one of the largest wholesale food markets of any kind. It’s a huge market and after its upcoming relocation to more modern facilities, it’s going to be even bigger!

Our tour took us on the “outer” fish market (the inner fish market is restricted to wholesalers, I believe). The outer market consists of  a few long alleys of stores selling various seafood, produce, groceries, and other random things like cooking supplies and even traditional Japanese swords. It’s not quite as smelly like you might think, but it can be very crowded and some of the alleys are more narrow than others, so you need to be ready to navigate through herds of tourists and locals. If you can, try to only carry a small bag with you instead of a large backpack that will surely be getting knocked into by everyone.

Our guide gave us an option of exploring the market on our own or following her around and we opted to follow her in order to find out more about the market.

As we wandered through the narrow alleys, we discovered all sorts of different produce, raw fish, food stands, and restaurants. Some of the vendors allow you to sample their products for free and so we ate a few things along the way which were quite tasty, although I’m still not sure exactly what some of them were.

You can also opt to buy a few things to munch on while you’re exploring the alleyways but you’ll want to make sure that you’re saving plenty of room for later, since you will have plenty of sushi to eat. 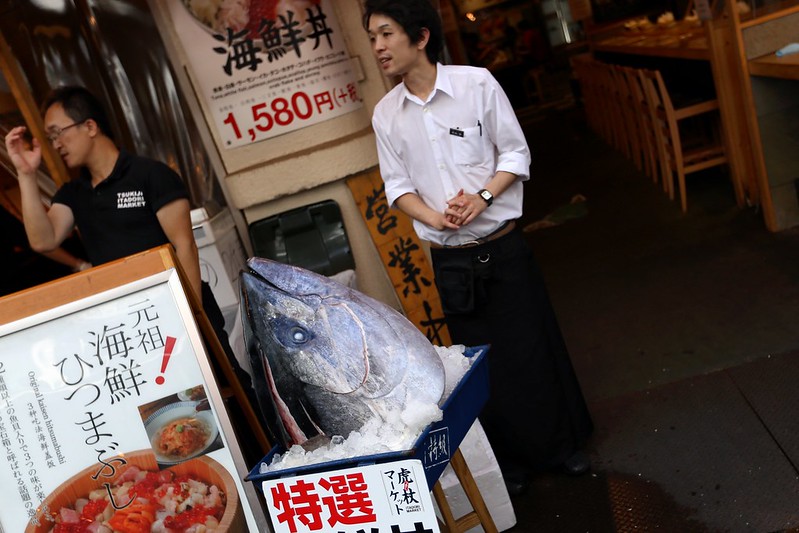 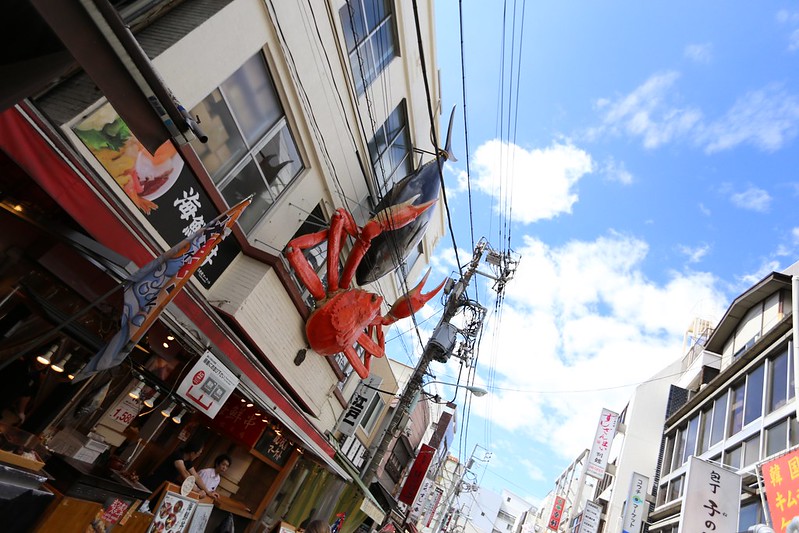 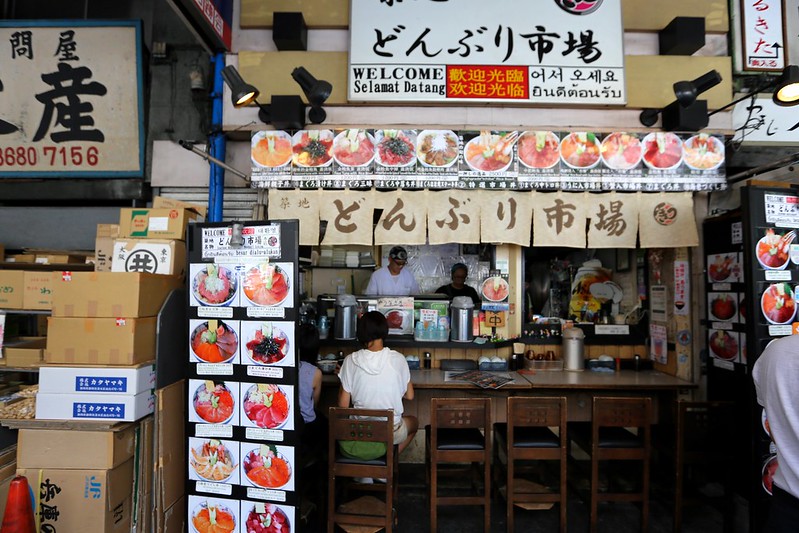 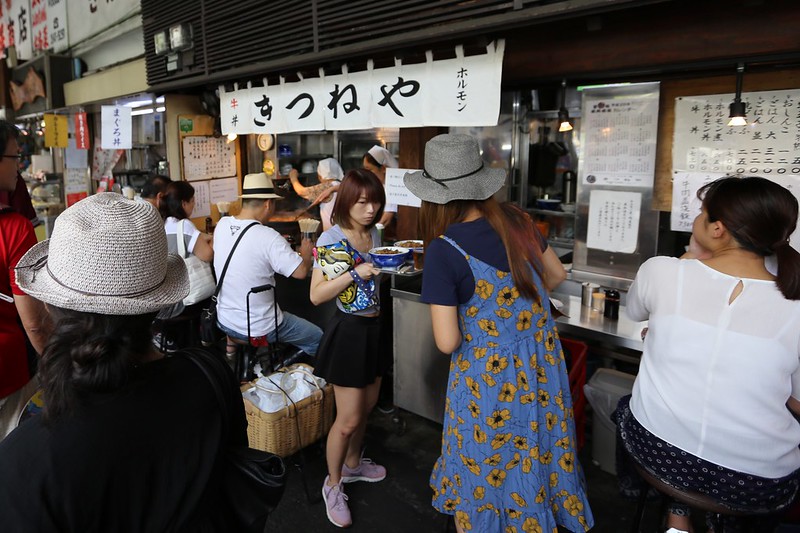 After around 30-45 minutes or so it was time to leave Tsukiji fish market. We walked about 5 to 10 minutes to the kitchen of a well-known sushi restaurant, where we would receive instruction from a sushi master. After slipping off our shoes and trying our best to stuff our feet into pairs of undersized slippers, they ushered us into the classroom where we had name tags and stools set up for us.

As soon as we got situated, we pulled up our stools to the front of the class where it was time to start to receiving instruction from the sushi master.

Our guide translated all of the instructions for us into English and it was surprisingly easy to follow along. While there are a number of steps involved, it’s not as difficult as you might thing to properly make sushi rolls. 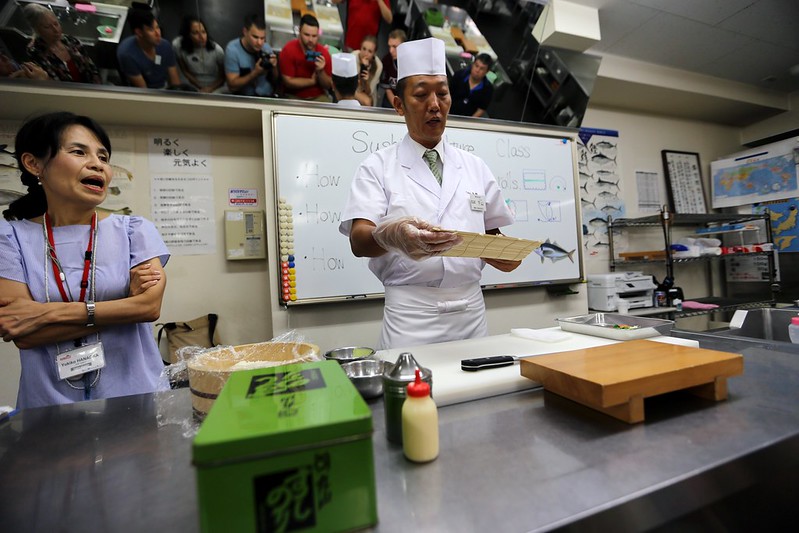 You begin by spreading the rice along the seaweed in an even layer, leaving just enough space on the end of the seaweed to allow the sheet to come together. 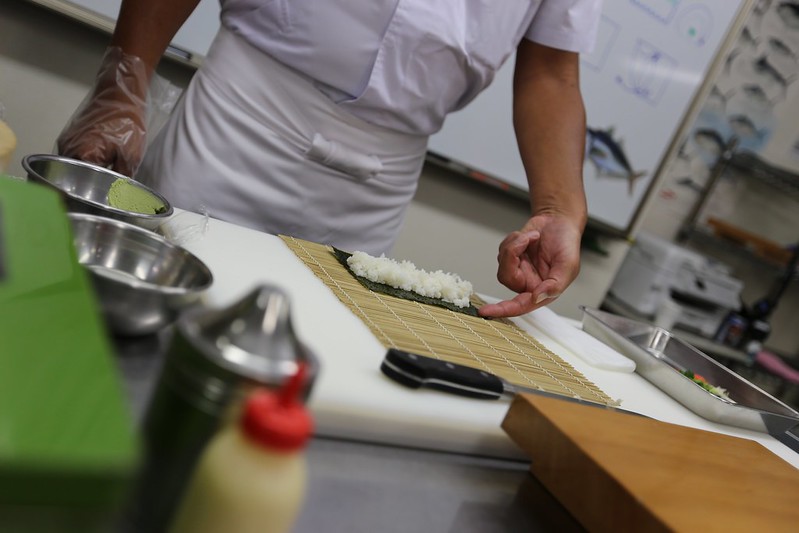 Next, you spread a bit of wasabi in a specific way (exact amount based on your personal preference) and sprinkle sesame seeds in the roll. 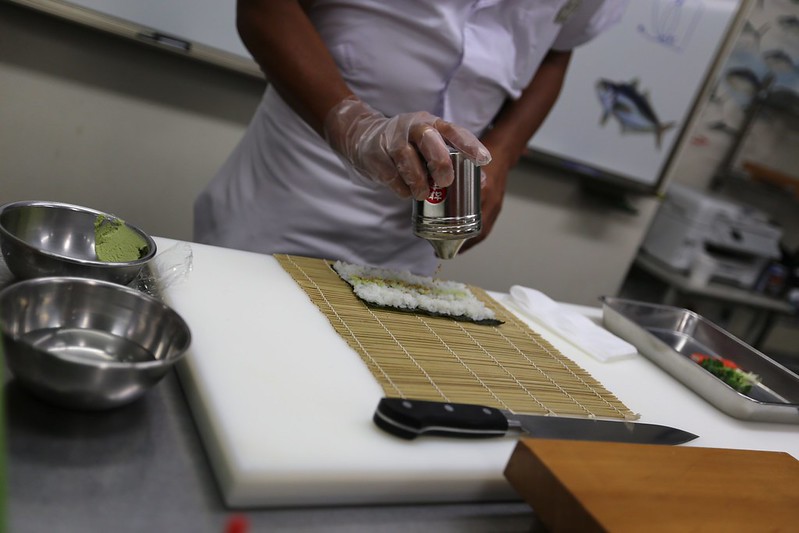 After sticking in your cucumber or whatever else is given to you, it’s time to roll up the sushi roll. They will teach you how to use the roll mat (made out of bamboo) to properly create a tightly rolled sushi roll. It’s not particularly difficult to do so but it does require a little bit of touch and technique to create that perfectly sealed roll without smooshing your roll or allowing the contents to spill out. If you ever forget a step or can’t seem to replicate what your sushi master did, there are a couple of assistants (along with your guide or sushi-making partners) who should be able to help you.

After you create the rolls, you’re taught how to create a hand wrap, which resembles a cone of seaweed and is stuffed with rice, (imitation) crab meat, and a few other ingredients. The hand wrap requires a bit more skill to execute since it involves forming a tightly wrapped cone, but it’s still not too difficult.

Once you’ve rolled it all up and allowed it to sit out for some time, it’s time to cut the roll into small, eatable pieces. I definitely cut mine up into pieces way too big and while they tell you there’s really no wrong way to slice up your roll, I suggest going with the 6 section method rather than cutting it into thirds or fourths. Also, pay attention to the method they show you for slicing through the roll, as you can ruin your sushi by trying to cut through it the wrong way. 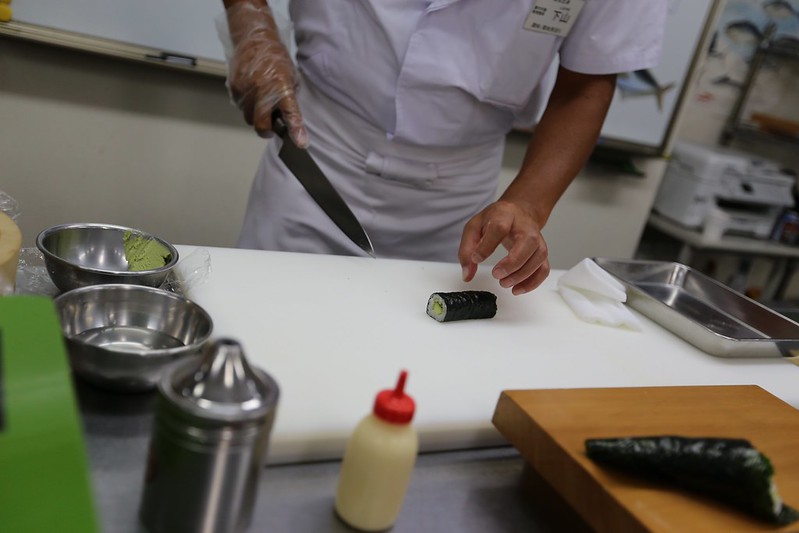 After creating the sushi rolls and the hand wrap, we moved on to making the seafood sushi dishes (Nigiri), with salmon, tuna, eel, squid, scallops, shrimp, and a couple of other pieces of raw fish I can’t recall. 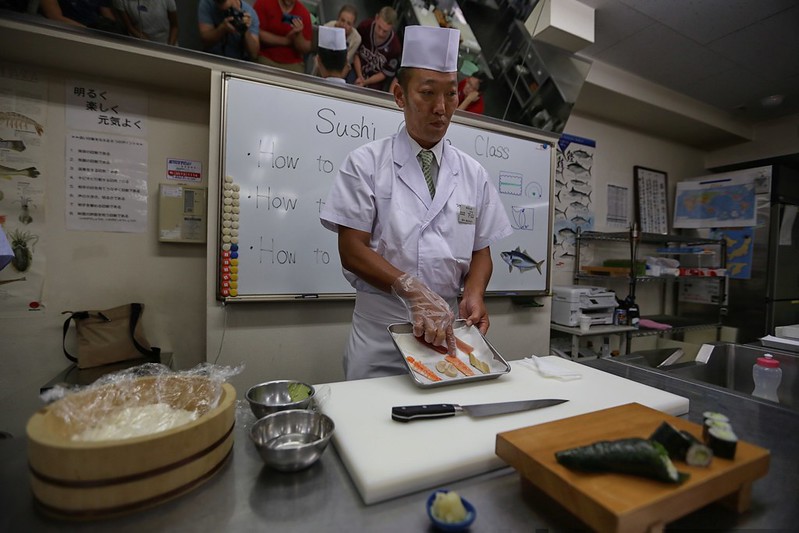 Creating these pieces required mastering the rice molding technique that allows a small serving of rice to stay packed under each piece of seafood. This is accomplished by a series of repeated squishing and patting methods that eventually results in a brilliant piece of sushi. It takes a few attempts to get the patting routine down but once you do, it becomes much easier to pack the rice in and mold it to fit into the seafood.

As you complete each sushi creation, you place them on your wooden board until you’ve got a beautiful display of sushi filled with enough pieces to completely satisfy your appetite. 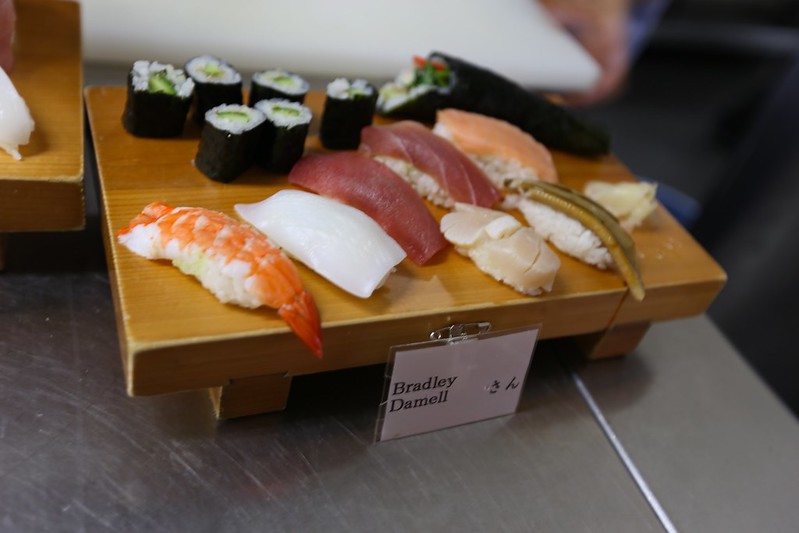 Once you’re finished, they’ll bring you out some chopsticks, green tea, and soy sauce and you’re finally able to taste test your final sushi product. I found the sushi to be an unexpected delight. Remember, I didn’t even consider myself a fan of sushi, but I still enjoyed eating it all (*maybe not the eel so much*). So even if you’re not crazy about sushi (or you just think you aren’t), this tour can still be a great way to experience Japanese cuisine and culture.

To conclude our tour, our guide made sure that we knew how to get to our next destination, which was very nice since our next destination required about 5 transfers on Tokyo’s subway. Our guide mapped out our changes that we needed to do and made getting to where we needed to be an absolute breeze. We finished around noon so the tour took a little bit more than 3 hours total.

I wouldn’t hesitate to recommend this tour to anyone looking for a uniquely Japanese experience while in Tokyo. How many people can say they’ve eaten sushi prepared by themselves… especially while in the heart of Tokyo? Not many. After this tour, I’m definitely much more open-minded about going out for sushi and for my sushi-loving partner, that makes him very happy.