The Dubai Mall is home to the second largest aquarium tank in the world, known as the Dubai Aquarium and Underwater Zoo. It’s home to over 30,000 living animals and over 300 different species of fish, including tons of sharks and rays that come in all shapes and sizes. There’s a number of different ways you can experience the aquarium but undoubtedly the most extravagant and memorable way is to scuba dive in it.

You don’t have to be scuba certified to scuba dive in the Dubai Aquarium, as they have an intro to scuba course (“Discover Scuba”) you can do in order to dive. Unfortunately, despite having like 7 dives under my belt, I’m still not scuba certified so I had to do the intro to scuba diving course once again. (I realize how much time and money I could save by getting scuba certified, my schedule just hasn’t been ideal for it yet, but I’m working on it!)

The good news is that the intro session is one of the quickest intro courses I’ve ever had to do. I mean, you’ll still get the proper training on the basics, but it doesn’t take as long as other intro courses might where you’re actually going into the ocean.

The intro course starts with a video introduction of the aquarium where you’ll learn about the hundreds of different species that inhabit the tank. You’ll then go over all of the scuba basics in a PADI pamphlet and sign off on your understanding of the book in addition to a waiver for liability.

Once you’re all versed in the basics, you’re taken over to the equipment racks where you’re fitted for your wetsuits and all of your equipment is set out for you. Then it’s off to the locker room to change into your wetsuits and get ready for the dive. Inside the locker room there are showers and also lockers which will allow you to lock up your personal belongings while you’re diving. Make sure you don’t come out of the locker room until you’re all zipped up as it’s a bit taboo in the UAE to show a lot of skin in a public place.

I think the Dubai Aquarium wins the award for most peculiar intro to scuba dive training area. That’s because the training takes place on a platform at the top of the aquarium tank, the same place where some of the huge rays like to hang out.

Thus, there’s a good chance you’ll have rays and perhaps even smaller sharks swimming around you as you learn the basics of clearing your mask and recovering your respirator.  If you’ve never tried scuba before, I think the presence of these large rays circling you could be a little distracting (and slightly frightening) but just remember that they’re harmless and you should be fine.

The dive is set up so that you swim from vantage point to vantage point and check out the marine life from those spots. You’re probably only actually swimming 10-15% of the time, which is understandable since you’re in a confined aquarium and there’s so many fish. And I mean sooo many fish. It’s an incredible experience to be in the water with such a high concentration of beautiful and interesting fish. Yes, it’s not quite the wild but the unique opportunity to be immersed with so many marine creatures (in some spectacular lighting) is one of the main things that makes this dive so special.

We started the dive off by dropping about 10 feet down on one of the higher ledges and kneeling down on the (artificial) rocks. You’ll be doing a lot of kneeling and lying on the rocks so make sure you’re weighted down properly before you head down or else you’ll be floating away every two seconds.

The thick wetsuits make it much easier to kneel down on the rough surfaces of the artificial rocks without scuffing up your knees, which is very nice.

From there we had a view of the entire tank. We could see the large glass panel (the largest of its kind in the world) looking out into the mall, the underwater 270º tunnel, and the cage and glass boats roaming around above. You notice really quick just how many different fish call this place home.

My only real negative about the dive is that they don’t allow you to bring your own GoPro (or even wear a head strap) unless you partake in their scuba photography course, which isn’t available for divers doing the intro dive. I’m sure they have their reasons based on safety and protection of the animals, but I was a bit bummed that I couldn’t get any shots of the marine life, since I really love underwater photography and could have gotten some amazing shots (all our footage was taken by our instructor).

Even though we couldn’t record our own shots, we did come away with some good footage, like the video footage of the rays below.

After staking out the rays from the ledge, we dropped to the bottom of the aquarium, which I believe is at a depth of around 27 feet. You’ll only spend a few minutes at this depth, so there’s no need to do a safety stop at the end of your dive.

While on the bottom we had some of the best view of the sharks and rays from below. It’s one thing to see the sharks and rays from behind thick panels of glass (which are about 30 inches thick!), but quite another to be sitting right below them in the water. You’re able to better appreciate their size and their graceful movements when you’re actually inside the tank.

After a couple of minutes on the bottom, we swam back up to another ledge, overlooking the underwater tunnel that cuts through the aquarium.

From our ledge, we could look down and clearly see visitors walking through the underwater tunnel, many of which were snagging photographs of us as we gawked back at them. It was kind of cool… kind of awkward… but overall a fun/interesting encounter. 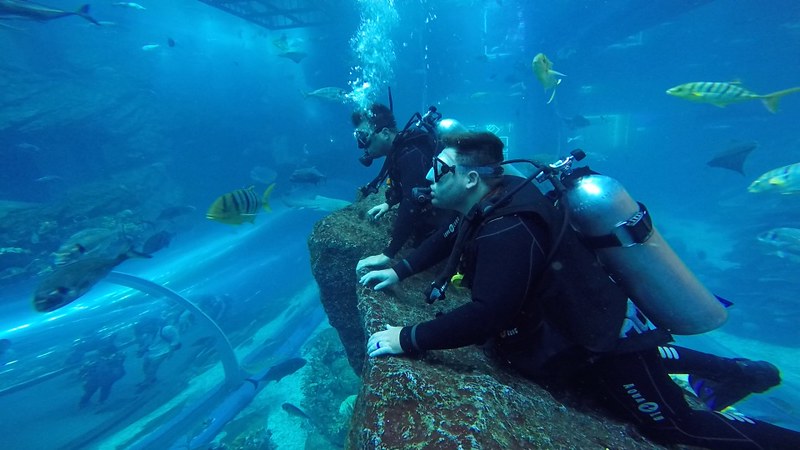 You can see the mall spectators in the background of the photos. I have to say, it’s a really different experience diving with so many people watching. I love the solitude that the ocean offers when diving so having our diving experience put on live display felt a lot different. It was fun exchanging hand waves with some people in the crowd but I think I much prefer the solitude of the ocean over the busy background of a huge shopping mall for a diving spot. 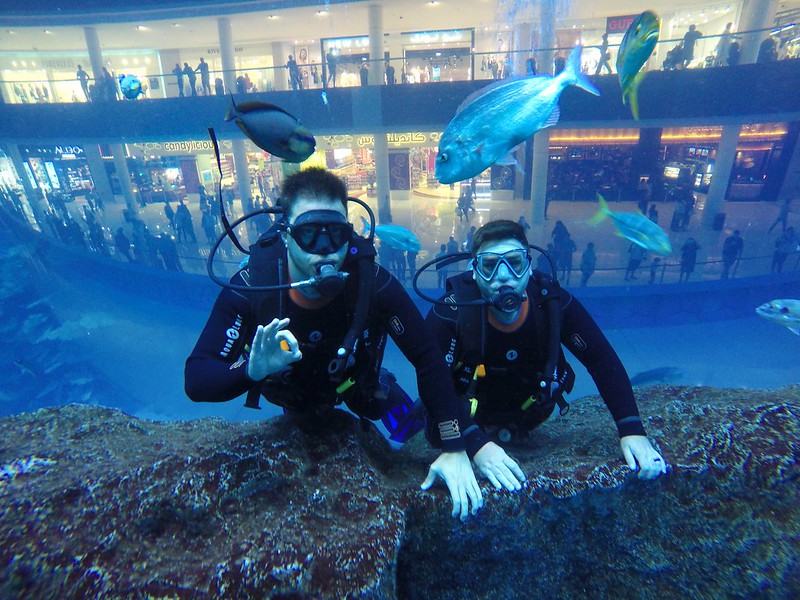 One thing that’s really great about this diving experience is that you get a lot of practice in a short amount of time with adjusting the air in your BCD. For those who don’t know, this is what controls your buoyancy (how much you float). Because you’re hopping from a lot of different ledges at different heights, you really get to practice controlling your buoyancy, probably more than you would in a normal ocean dive since you rarely “land” on rock structures like you do in the aquarium.

As stated, you don’t get a lot of opportunities to swim in the aquarium and the video below shows about the longest distance you’re required to swim.

We then swam up to another ledge, which seemed to be prime shark spotting. The ledge we were observing from had tiny holes in it to stick your fingers in to stabilize. If you look at our hands in the photo below, you can see where some of our fingers are inserted into the rock. I wish more of the rocks had those holes, because it would be a lot easier to stay positioned on some of the ledges. 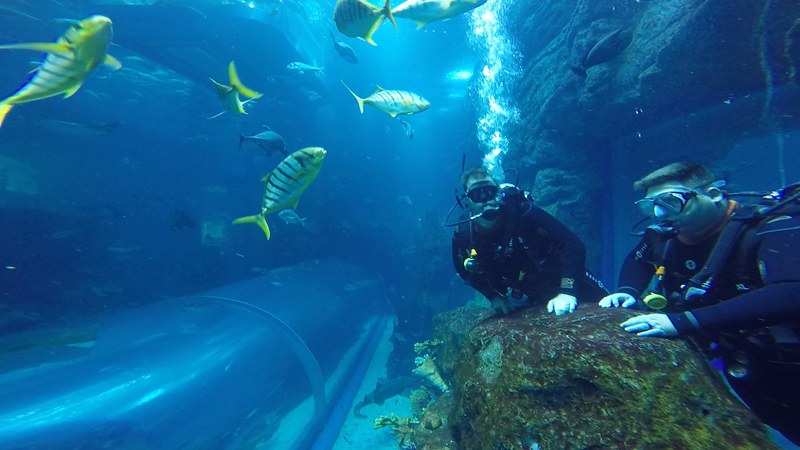 The guide told us that the sharks for the most part follow the same routes throughout the tank so it’s pretty easy to get to a spot where they’ll be and in this tank, this happened to be one of those spots. We weren’t able to get super close to the sharks like I did in Australia’s shark tank, but it was still close enough to appreciate these animals.

There’s a number of sharks in the aquarium like reef sharks, nurse sharks, and others, but I think the sand tiger sharks were the largest and most interesting sharks in the aquarium. They are cousins of the great white sharks (but aren’t actually related to tiger sharks). They look about as mean as could be but they actually have no confirmed fatal encounters with humans and are very docile, so you shouldn’t have much to worry about. In any event, your instructor will have a short rod with him or her just in case the sharks come cruising a little too close for comfort.

The video shows some pretty close views of the two sand tiger sharks.

This diving experience is unlike any other dive you’ll probably take. You’ll encounter an overwhelming amount of fish and species and do so while being spectated on by shoppers and tourists through the biggest acrylic panel in the world. It’s very different from your typical scuba dive but with its calm water and varied “terrain” it also could serve as a superb introduction to the sport of scuba if you’ve never attempted it before. If you’re looking to experience a bit of a thrill in the heart of Dubai, then I highly recommend booking yourself a dive!