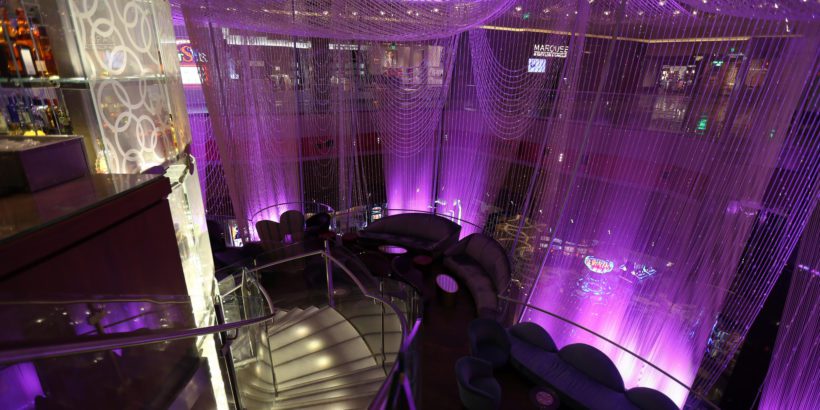 The Chandelier Bar, located in the Boulevard Tower at the Cosmopolitan Hotel in Las Vegas, is one of the most famous bars in the world. It’s considered by some to be the largest chandelier in the world and was even considered an architectural and engineering marvel when it was built. Even if you’re not staying at the Cosmopolitan, it’s definitely worth it to stop and by and check out this bar and try at least try out one of its unique cocktails discussed below.

The Chandelier Bar actually consists of three separate floors and they each have different hours of operation:

In addition, each level to the bar serves their own distinct cocktails, which I’ll talk more about below. You can expect to pay around $16 for most signature cocktails, although other more standard drinks will be cheaper and might be closer to $12.

Level 1 recently underwent million-dollar renovations and it’s simply stunning. There are two bars on level one (the main bar and the side bar). The bars on level one have video poker machines and also have a drink voucher system. When you put $20 into the video poker machine, you get a free drink and you’ll earn another free drink voucher when you play at least $1 a hand for every 20 minutes that you play after that. I personally don’t play video poker, so I wasn’t able to try it out but I saw a number of people there playing into the wee hours of the morning.

Despite the ultra-swanky appearance of the bar, it doesn’t require a dress code. Since level 1 is also on the casino level, it has a pretty informal feel to it. That’s not to say that folks don’t dress up at all, it’s just that you probably won’t stand out even if you’re dressed more casually since it gets a good amount of casino traffic.

Level 1.5 is more of a lounge scene since it opens up from 6PM – 4AM. You can access it by taking the immaculate staircase when the bar opens up.

Once you arrive, to level 1.5 year, you’ll be blown away by how beautiful the scene is.

Even if you don’t drink, you should wander around and check it out.

One great thing about the Chandelier Bar is that the bar tenders are exceptional. All of the ours were extremely attentive, personable, effecient, etc. Basically, they were the perfect bartenders.

You’ve got to make it to this level so that you can try the Fire Breathing Dragon cocktail. The drink starts off with covering the rim with pink peppercorns and Thai chili syrup.

The bartender then adds Bacardi DragonBerry and raspberry puree along with red bull and a few other ingredients.

Then, there’s the highlight. Raspberries are dunked into liquid nitrogen and then dropped into the glass, setting off a smoky reaction.

You’ll be given a shot glass full of raspberries to munch on and all it takes is two or three of them to have you breathing smoke out of your nose and mouth. It’s pretty wild. Here’s a video of my experience with the Fire Breathing Dragon. 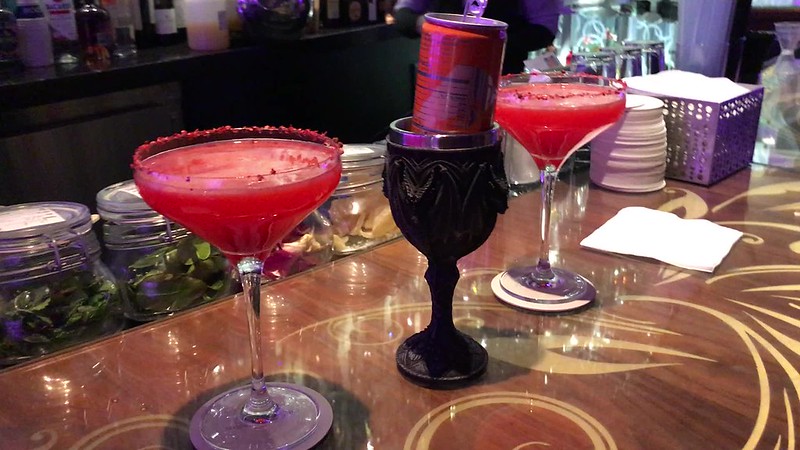 Level 2 can be accessed via the escalator from Level 1 or through the stair case.

The views from Level 2 are exceptional.

There’s also lots of lounge type seating around the bar.

There’a also a side bar located on Level 2.

The “flower drink” at the Cosmo

If you’ve done any research on this bar or had a friend who has stayed at the Cosmo, you’ve probably heard about the famous “flower drink.” It’s actually called the “Verbena” and although it’s considered somewhat of a “secret drink,” it’s actually been served more than 100,000 times a year at this bar to guests.

The drink itself is something similar to a citrusy tequila-based margarita. But it’s the accessory that comes along with this drink that makes it so special and unique.

You’ll first be instructed to take a few sips of your drink. And then, you’ll be given an edible flower known as a Szechuan button or buzz button, which you’ll eat (and swallow). Within a few seconds, the properties of the flower take effect, which are said to speed up your salivary glands. This creates an intense tingling sensation within your mouth that alters the taste of the drink.

It’s a bit like the sensation you get from pop rocks but even more intense and lasting. When I took a few gulps of my glass of still water, it felt like I was drinking a glass of extremely fizzy sparkling water. Try to avoid brushing your teeth just prior to eating the flower, or it might be overly intense for you due to the interaction with the minty toothpaste (yes, we learned this the hard way).

After you try your Verbena, hang around the bar for a little while and you’ll almost surely be able to watch others try it our for the first time.

Here’s a video of my reaction when trying out the drink: 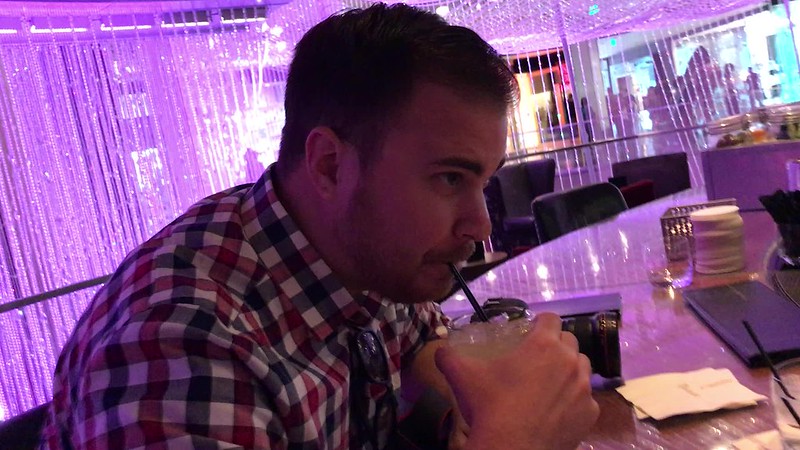 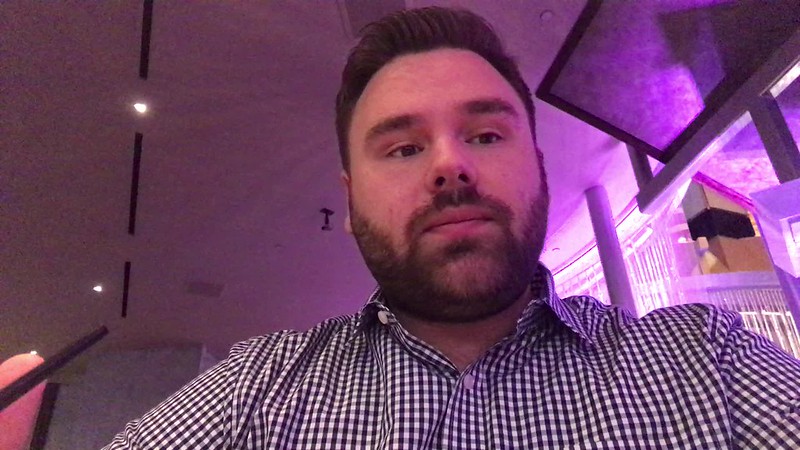 According to the Cosmo, two other signature cocktails to look into are:

The Chandelier is definitely a bar worth checking out even if you’re not staying at the Cosmo. The visuals are stunning and the unique drink concoctions make it an even more memorable experience.