Cape Town, South Africa is a special place and high on the list for many travelers. It’s got a little bit of everything to offer, including stunning natural landscapes, beaches, adventure, history, and plenty of culture. On my recent visit to Cape Town, 8 things stood out to me that I think everyone should at least consider doing while they are there.

No visit to Cape Town would be complete without a visit to Table Mountain. Recently named one of the new 7 wonders of the world, this imposing mountain standing over 3,550 feet tall is probably the most iconic landmark in South Africa and its cliffs create an imposing, yet breathtaking backdrop to the city.

You can visit Table Mountain either by cableway or via long hike. The hiking route is known for being one of the most dangerous hikes (some have even died attempting it) and so you probably only want to attempt that if you actually know what you’re doing. The cableway on the other hand is built for the less intrepid and within a minute or two, you’re zipped up to the top to enjoy the view. Read about my experience on the cableway here.

The views from atop Table Mountain are, as you would hope for, spectacular. You can see the entire city of Cape Town sprawling beneath you and you get sweeping views of the surrounding peaks and ocean. I recommend trying to time your visit with the sunset for some stunning photographs. Clouds blow over the top of Table Mountain, which also help add drama to your photographs but be prepared for it to be a bit chilly up there, since those winds don’t let up.

The Cape of Good Hope is a rocky promontory only about an hour and 15 minute drive from Cape Town and marks the south-western most point in Africa. The first European, Portuguese explorer Bartolomeu Dias, reached the Cape on March 12,1488, and named it the “Cape of Storms” but the more aspirational title of the “Cape of Good Hope” eventually caught on. Ever since then it’s served as a significant navigational landmark for sailors, as it marks the east-turning points for ships setting out for Europe.

The drive to the Cape of Good Hope from Cape Town is extremely scenic. On your way there you’ll likely spot some wildlife, such as ostriches, turtles, and maybe even some baboons (keep your distance from the baboons). I recommend you take Chapman Peak’s drive on your way there or back to soak in one of the most scenic stretches of highway in the world.

Once you’re at the edge of the African continent, there’s some beautiful waters and rocky seas to explore and you might encounter more wildlife like the African oystercatcher. You might also notice the wind, since this area is known for its stormy seas. The Cape is situated where the warm Mozambique-Agulhas current from the Indian Ocean converges with the much cooler Benguela current which flow from Antarctica. It’s also near where the Indian Ocean meets the Atlantic, although that’s hotly debated.

This destination often goes hand in hand with the Cape of Good Hope since you can visit it on your way from Cape Town. Boulder’s Beach was one of the highlights of our trip to South Africa. If you’re not aware, this beach is home to thousands of “jack-ass” penguins who sought refuge from the nearby great-white infested waters near Dyer Island. Read here about my experience visiting Boulders Beach. 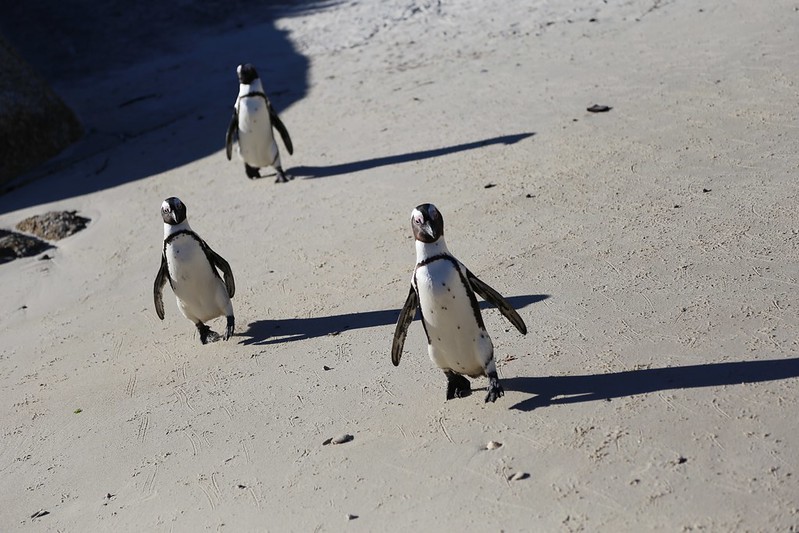 Penguins headed right toward us.

Some of these little penguins are highly curious and not very shy so they’ll waddle right up to you to see what you’re about (just don’t feed them or touch them). They’ll go in and out of the water, alternating between darting around like little torpedos in search of food to just floating around in the cool waters. In addition to just being flat-out adorable, these penguins provide endless entertainment as they mingle with one another and hop about the rocks. 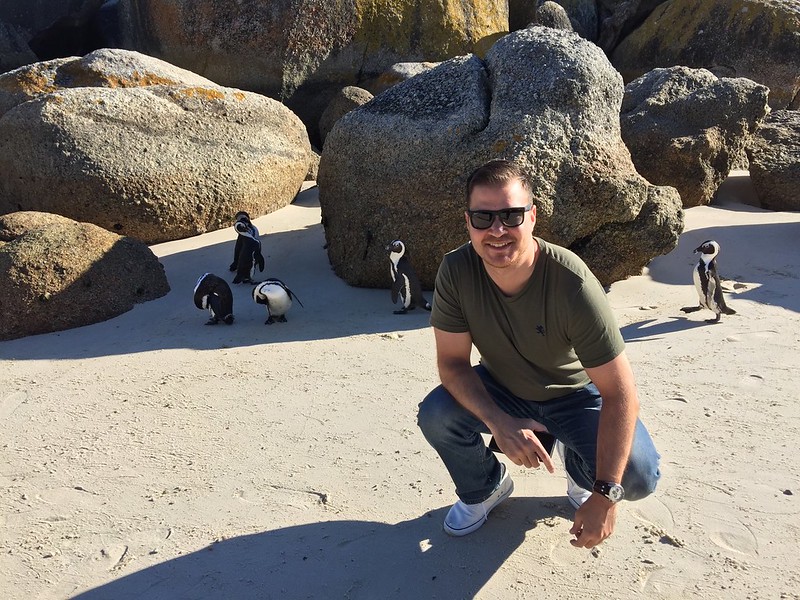 They state that during September and October their numbers are limited since they are mostly out fishing in the sea. However, we visited in the middle of September and we were greeted by plenty of penguins (though it wasn’t like some of the photos I’ve seen with hundreds of them hanging out on the beach).

The best time of day to see the penguins is apparently early in the morning or in the late afternoon. Our morning visit just after opening (8 am) was perfect as we didn’t run into any other visitors and the penguins seemed to be out and about in good numbers.

Have you ever considered getting up close and personal to a great white shark? If so, Cape Town is the perfect place to make this happen because South Africa is thought to be home to the largest population of great white sharks in the world. 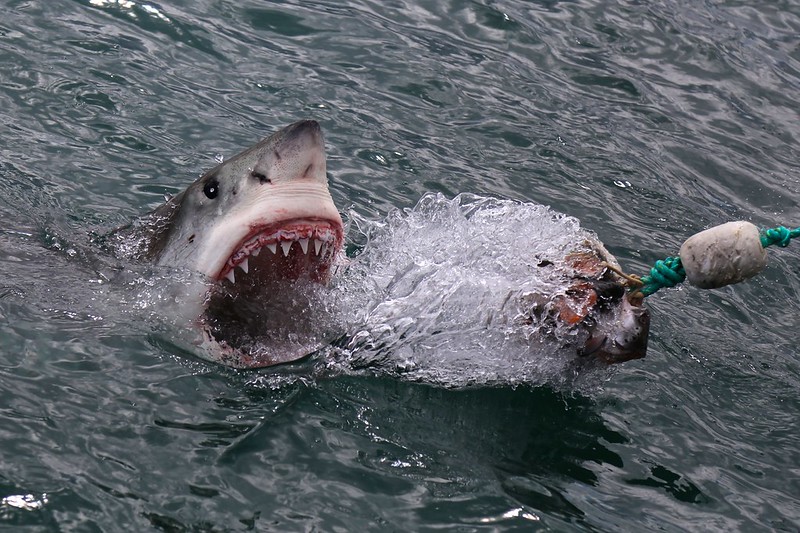 Great white shark with the open jaws! My favorite shot I took.

After a short boat ride out, you’ll drop into a steel cage where you’ll bob in the cool murky waters as you await for sharks to appear. You never know what you’ll come across. Some sharks are big and powerful. Some are small and quick. 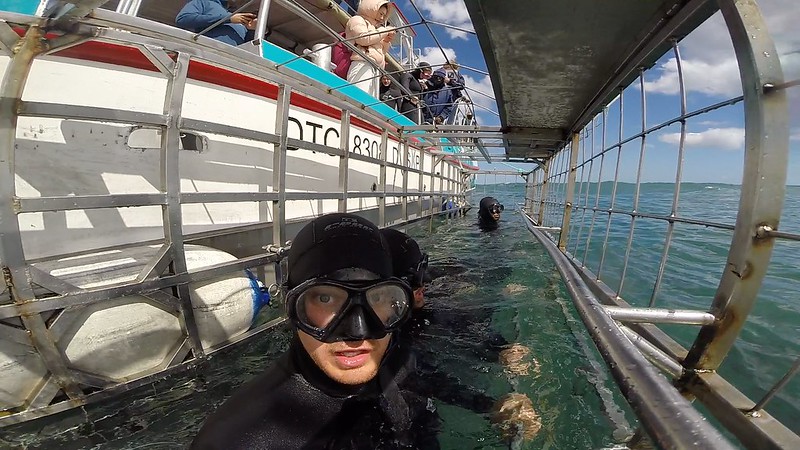 Inside the shark cage, waiting for great whites to arrive.

You can choose to go out from Cape Town or depart from Gansbaai, which is about 2 hours away. Gansbaai is my recommendation since it seems like you stand a better shot of actually seeing the sharks and they take you to or near Shark Alley, which is where Discovery Channel films for its infamous Shark Week.

If the sharks come out, which they usually do, prepare for one of the most exhilarating experiences. As you can tell from the clip below, we came only inches away from one great white as it almost mistook our GoPro for an appetizer.

Green Market Square is a great place to find cheap souvenirs. They’ve got a bit of everything. Woodworkings, art work, bowls, clothes, jewelry, table pieces, and plenty of other items. You can haggle the prices if you want, but many of the prices were very cheap to me so I didn’t feel the need to bargain them down. 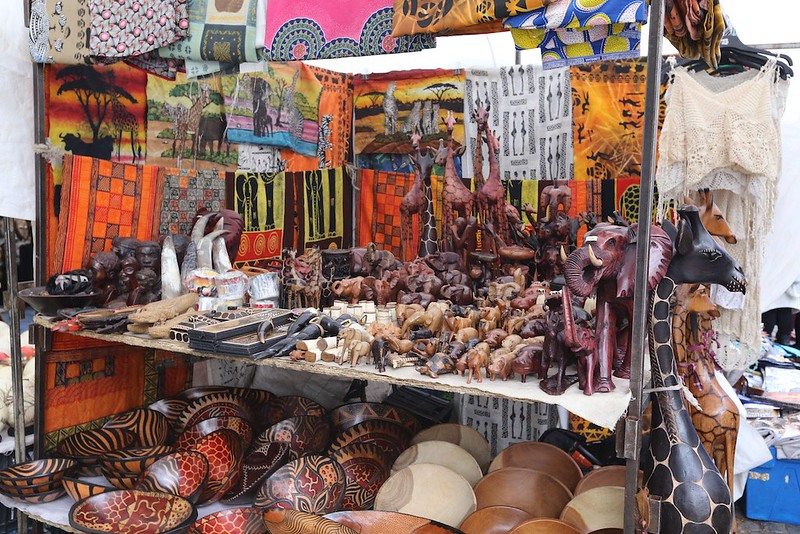 One warning: you will likely run into people begging for money. Some will tug on your heart strings. Some will do the opposite. Some of them can get very aggressive and will not hesitate to follow you for blocks and blocks. So try to look less touristy/wealthy and avoid taking out cameras or otherwise giving the unmistakable impression that you’re a tourist. Also, avoid arriving near closing time as that it apparently when it gets worse and the area actually becomes unsafe at night.

My strategy is to have a small amount of cash/change to give to these people. If it gets really bad, you can find a local merchant and tell them that you’ll buy some items from them to keep them away and they often are willing to help. 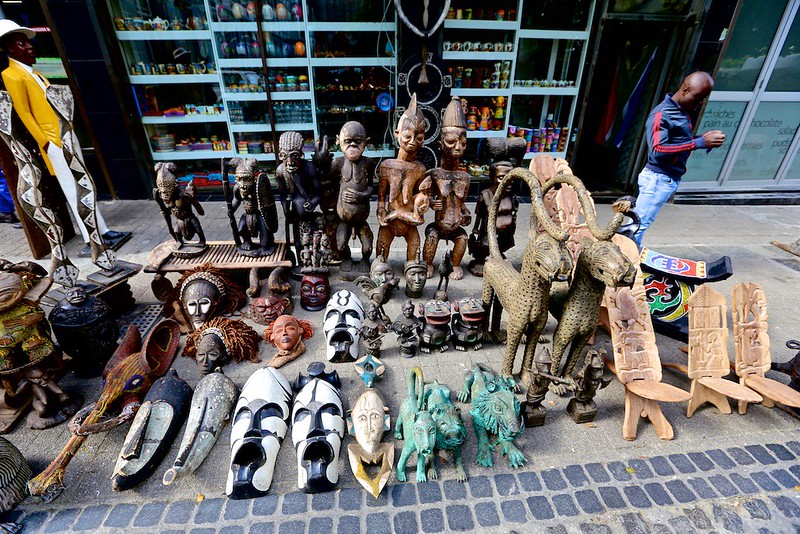 If you want to avoid this possible situation, you can also stick to the V&A Waterfront for your souvenir needs. It’s a major tourist area in Cape Town, so it will likely be more expensive but it’s also more patrolled and we didn’t get hassled by people in the street. If you’re really into markets, check out the V&A Waterfront on market day, held on Saturdays. There’s also a lot of shopping and eating to be had at the V&A Waterfront.

While this may not be in everyone’s budget, I highly recommend you trying to get on board a helicopter while in Cape Town. Cape Town is one of the most stunning places in the world, in terms of natural beauty, but it’s hard to appreciate the magnitude of that beauty from the ground.

Once you get up in the air, it’s a different story. You get a bird’s eye view for Table Mountain and all of the surrounding peaks, such as Lion’s Head. You’ll also see the dozen of other peaks and hills that tower nearby and stretch into the ocean.

My one suggestion with helicopter rides is to always request doors off. This is a much more exhilarating way to experience the scenery and you’ll get much better photographs and video by not having to contend with a window. You can read more about our helicopter experience here. 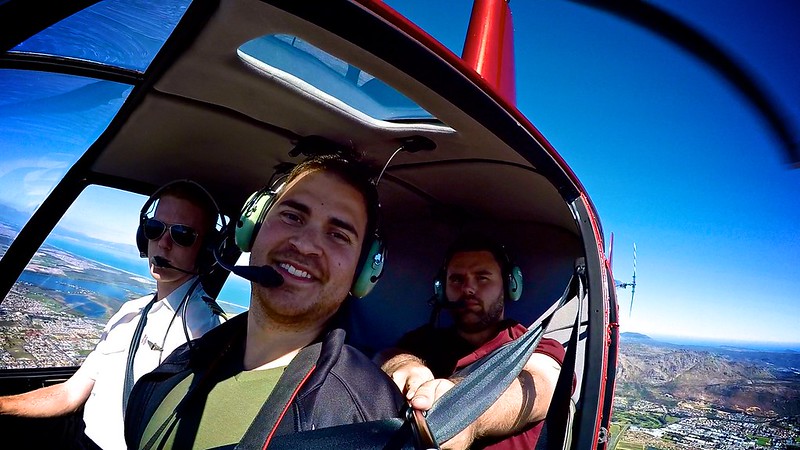 Located on the slopes of Singal Hill, the Bo-Kaap is an area of Cape Town once known as the Malay Quarter. That name stems from large influence of Malaysian, African, Indian and Sri Lankan descendants on the area, who were originally brought over as slaves by Dutch imperialists in the 16th and 17th centuries. Today it’s home to a large Muslim community but is perhaps best known for its colorful buildings and cobblestone streets.

It’a a cool place to wander through and take photographs and may tourists go on walking tours to learn more about the architecture and history of the neighborhood. There’s also a Bo-Kapp museum, mosques, boutique shops, and plenty of restaurants you can check out as well.

A cultural tour is a must while in Cape Town. We took a tour that took us through many of the historical landmarks from the apartheid era found throughout Cape Town, including some that were located in the townships. Each stop on the tour had its own story, some of which were downright depressing while others were inspiring stories full of hope and meaningful lessons for society.

These are not tours designed for you to gawk at locals living in poverty and feel sorry for them. Instead, they are eye-opening journeys that help you better understand the struggles of apartheid, the efforts being undertaken to restore those communities, and the work that sill needs to be done for and by these people.

Our guide had a particularly interesting perspective since he grew up as half white and half black during apartheid. I got goosebumps from many of the stories he told us and couldn’t believe some of the things he’d witnessed. Out of everything I did in South Africa, the stories he told us left the most lasting impression on me, and I couldn’t help but to be inspired.

There are many different types of cultural tours you can sign up for and many also incorporate a visit to Robben Island, which is where Nelson Mandela spent 18 years of the 27 years he was imprisoned. I recommend reviewing your different options and going with the one that you’re most comfortable with. Not everyone will feel comfortable visiting the townships.

There are a ton of things to do in Cape Town, South Africa and the nearby cities. While these 8 things barely scratch the surface of what you can do while there, these were all things that absolutely made our visit to Cape Town unforgettable, so I recommend at least looking into them.