Where is the Maldives underwater restaurant Ithaa located?

Don’t get Ithaa confused with Hurawalhi, which recently built an even bigger undersea restaurant called 5.8.

We emailed the Conrad about a month prior to our visit and made reservations for two people. I’d read that you can request reservations 2 weeks prior to your visit, but I highly suggest that you contact the Conrad before that to ensure that you’ll have a spot reserved for your desired date.

How much does the Maldives underwater restaurant Ithaa cost?

I used the American Express Hilton Aspire $250 Hilton resort credit and a $200 Hilton gift card I’d received to knock the effective cost down to around $116 so that made me feel a little better about the splurge.

In addition to lunch, you can also visit Ithaa for cocktails from 11am to noon for $75 plus taxes (I believe that only covers one glass of champagne). Dinner starts at $325 per person plus taxes and kids are not allowed for dinner. The dress code is smart casual but you can wear shorts like we did (though for dinner I believe they request that men wear pants.)

I actually don’t mind splurging on some experiences like private helicopter tours or diving excursions but I’ve never cared to splurge on dining. But this meal had enough of an “experiential element” to it that I thought I’d give it a try. Plus, Brad had really wanted to try it out so we went ahead and booked the lunch.

Ithaa is about 5 meters under the sea and the entrance is located at the end of a pier, near the Conrad’s main pool area. It’s also on the same pier as the Sunset Grill, which is another beautiful restaurant at the Conrad. You actually have to walk through the Sunset Grill to get to Ithaa.

We walked down the pier and made our way into the small building that housed the entrance to Ithaa. From the deck, you can look down and see the underwater restaurant from above.

The inside of the entrance has a mini-lounge which looks like an area you can rest up in while waiting for the restaurant to open. (We were admitted early to get photos.)

Once inside, you’re directed to take your shoes off, so be sure to have presentable feet/socks. You then make your way down a staircase, and within seconds, you’ll walk right into one of the most stunning restaurants on the planet.

It truly is a beautiful sight to behold when you first walk in. Soothing music plays in the background. Fish start popping up all over the place. Dom Perignon bottles tempt you from afar. The entire scene is a bit surreal. 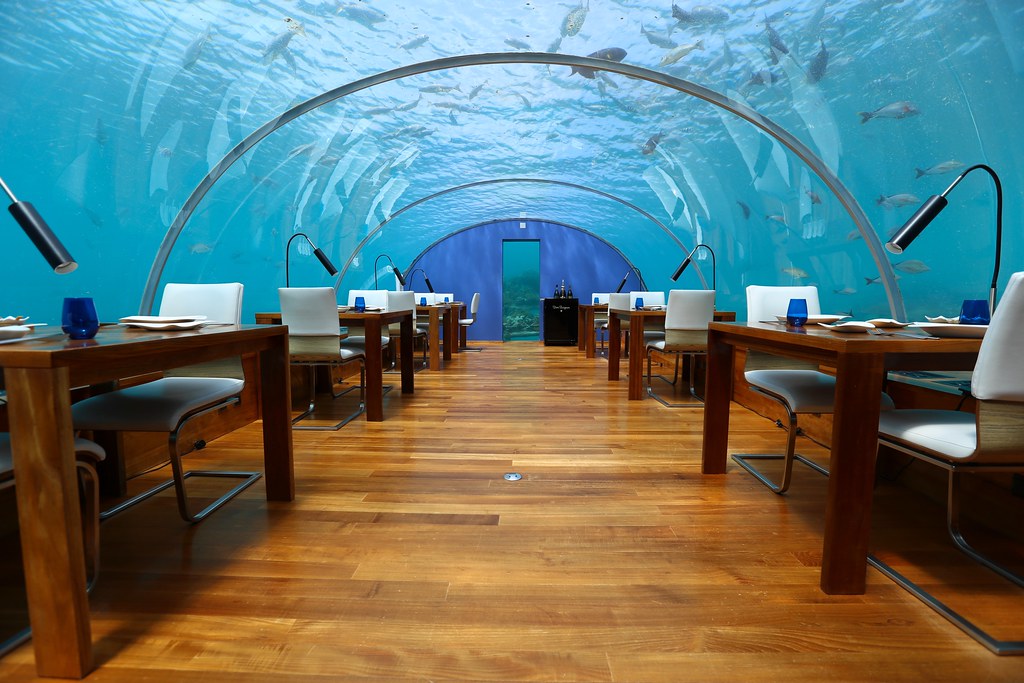 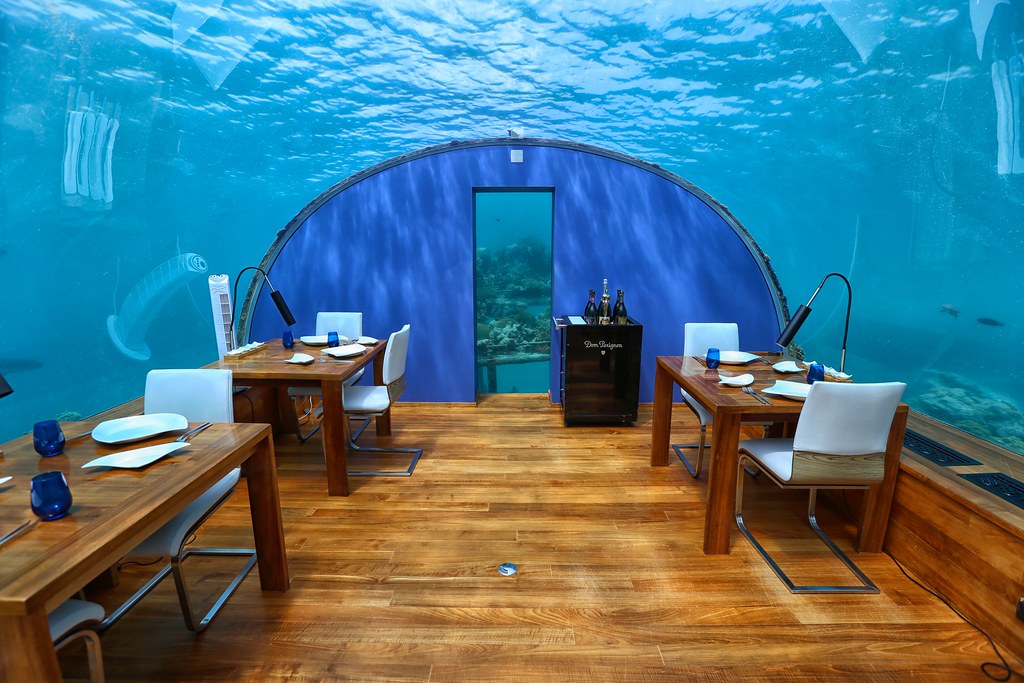 Like many other people, we’ve walked through aquarium tunnels before but it’s quite another experience to be walking in the midst of real marine life darting in and out of a real coral reef in the middle of the Maldives!

The first thing I noticed were the black tip reef sharks circling the tunnel. We counted at least five different black tip sharks though there could have been more. These were the same reef sharks that we often saw swimming near our overwater villa.

They feed the fish just as lunch is beginning so I’d say there’s a high likelihood that you’ll also see the sharks and many other marine animals if you visit. They actually go into a bit of a feeding frenzy around feeding time so have your camera ready for that.

There are many other fish to check out including many pufferfish, angel fish, parrot fish, and plenty of others.

And for those Finding Nemo fans, you’ll be happy to see there are a few sea anemones housing clown fish.

If you love the ocean and especially if you enjoy snorkeling and/or scuba diving, this place is made just for you. In fact, it was difficult to focus on enjoying the meal sometimes because I was completely fixated on all of the different marine life that were making special appearances.

There are only seven tables in the restaurant but that makes the setting all the more enjoyable and intimate. 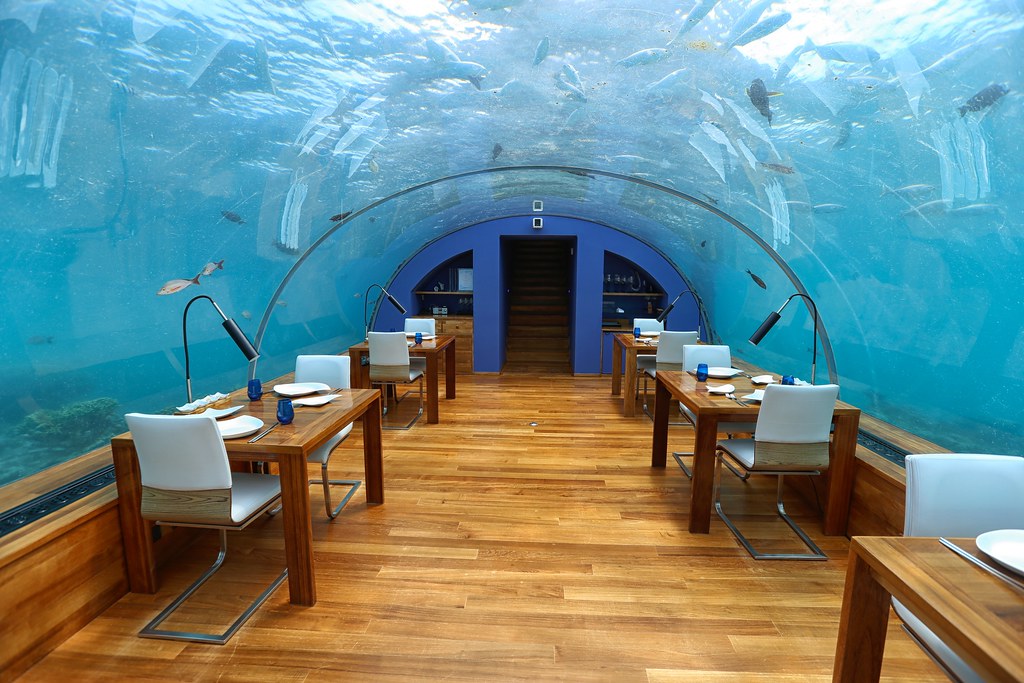 Once the meal begins, you can choose any unoccupied table you’d like. During our lunch, there were three other couples attending so there were a few open tables.

The tables come with aquatic-inspired plates and uniquely shaped cutlery. The brown tables and wood flooring contrast brilliantly with the surrounding blue water. It’s also a cool and soothing sight to see the sunlight casting wobbly reflections inside the restaurant. 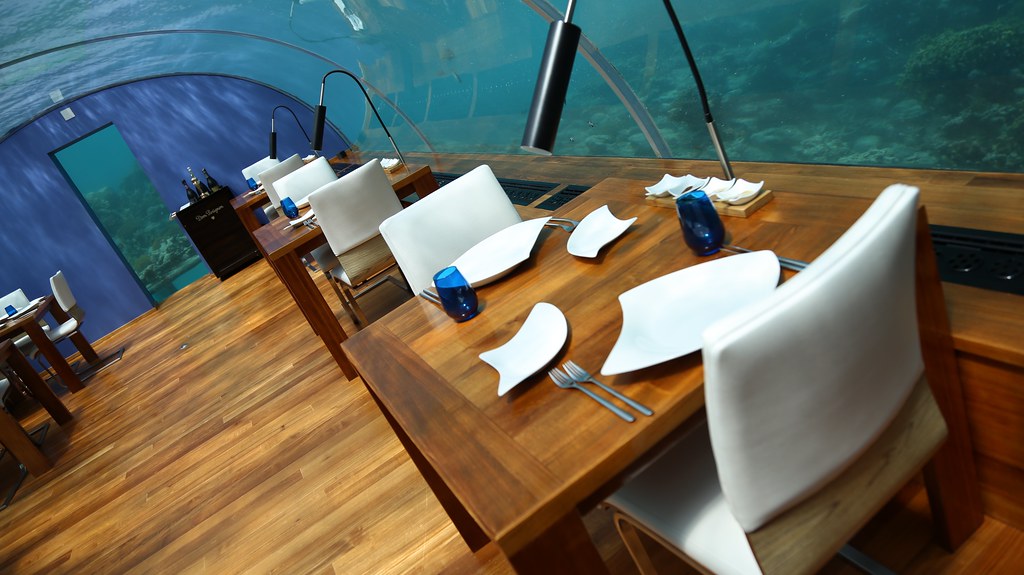 We were first brought out a selection of breads which were very fresh and tasty.

For the first course — the appetizer — we were given butter poached lobster and white peach salad, served with Madlivian tuna and viniagrette. The salad had a nice balance of sweet and savory and was very fresh. I also dug the presentation.

The second course was the entree that consisted of artichoke and roasted garlic veloute, served with caviar, five spiced foam, and toasted brioche. The soup was heavy in texture but light on the flavor. The caviar and bread (which was slightly sweet) provided a nice touch, though.

We decided to upgrade Brad’s dish for the main dish (for $40) so he went with the charcoaled reef lobster gratinated with saffron and espelette chili hollandaise and served with avocado mash, corn tiles, and beetroot tortellinili. Brad loved the lobster and the sauce served up with it, especially after squeezing some fresh lemon on it.

For the main dish, I decided not to upgrade so I could try out the other main dish option. So I went with the sous vide bresse chicken with chanterelle mushroom risotto and blue stilton froth. This was actually stepping out of my comfort zone since I always avoid mushrooms but I’ve learned that gets very hard to do when traveling a lot and eating at nice establishments. The dish was excellent, though.

Finally for dessert we were served the honey roasted pumpkin cheesecake. I didn’t taste a whole lot of pumpkin with the cheesecake but it was still a very sweet and delicious dessert.

And as a final treat, we were given two small handmade chocolates, which were nice and wafery.

Overall, I didn’t really have any complaints about the food. The only complaint was that no champagne was included with a $560 lunch. I didn’t exactly expect free flowing Dom Perignon, but you would think paying that much could at least get you a single glass of bubbly to kick things off (only the dinner gets that).

You can check the lunch and dinner menu online by using these links. Note that our lunch menu was a little different. Here is the menu we received for lunch:

Three things to note about your underwater experience

The underwater restaurant is very bright and reflective (at least it was for lunch). I would highly recommend to bring your sunglasses because you will probably be wishing you had them if you failed to bring them.

The second thing to note is that the restaurant is quite warm. While there are AC units built into panels running alongside Ithaa, it still gets pretty warm down there. So bring clothes that will keep you cool. My guess is that it might have to stay warm down there given the temperature of the water so I’m not sure there’s too much they can do about the temperature but you could always ask if it gets bad.

It could use some scrubbin’

And finally, as one downside to the experience, the acrylic walls of the tunnel did show their age. I know that they clean the glass often but I couldn’t help but notice some major nicks and debris collecting on the outside of the tunnel. In fact, a lot of my footage didn’t look very appealing because of this. I understand it’s probably impossible to keep everything spotless but it wasn’t in as good of shape as I thought it would be.

Was it worth it?

As someone who doesn’t care to splurge on meals, I found the $560 bill a bit challenging to justify. Had champagne been included in that bill, I think I would’ve felt differently. It was still a very memorable experience and it’s such a unique environment to enjoy a meal in that I didn’t feel like I got ripped off or anything. But like many things in the Maldives, the prices can leave you questioning, “was that really worth what I just paid?”

So was it worth it? I’d say it was worth it to experience it all one time for the novelty and for the views but it’s not something that I’m in a rush to spend several hundred dollars on again.