Qatar Airways has become one of my favorite airlines to fly with due to its luxurious hard product and great dining and service. The only problem was, I realized I didn’t know what the proper Qatar pronunciation was and found myself constantly pronouncing it differently. After a while, I decided it was time to clear up some of the confusion and find out exactly how to pronounce Qatar.

The quest for the proper Qatar pronunciation

I’ve actually been curious about how to pronounce Qatar since I was in college. I went to Texas A&M University for undergrad, which has a campus in Qatar. I would hear people around campus pronounce it like “cutter” but also like “cuh-TAR” and so I never realized which was correct.

Fast forward a few years to when I got deep into the miles and points game.

I called American Airlines’ call center in Australia to book a Qatar flight with AA miles and I initially told them I was calling about booking “cutter” flights. The Aussie AA agents responded with a confused “huh?” so I then went with the kuh-TAR pronunciation and they immediately recognized what I was talking about and proceeded to book my flight.

I found that it wasn’t just the AA agents who would get confused by my cutter pronunciation. Most of my friends and families would also scratch their heads a bit when I would talk about the state of things in “cutter” and I’d have to quickly clear it up with a “oh, you know, the country, kuh-TAR.”

So I started to lean towards kuh-TAR as the chosen way to pronounce Qatar and it seemed to be working fine for me.

But then I started to do some research. I came across other blogs that posed the question. I learned there were even more ways to pronounce Qatar, like the UK/British Qatar pronunciation “Cuh-tah.”

On Reddit’s TIL (Today I Learned) subreddit, I found time and time, and time again, that others (including the Merriam-Webster Dictionary) would state cutter or a version very close to that like “kä-tər” was proper.

In addition, apparently a lot of people who spent time in the country of Qatar said that locals mainly used cutter while kuh-TAR was a pronunciation used by people from the West. (Some even implied kuh-TAR was of a derogatory nature but I don’t think that’s the case.)

I dug deeper into it and came across videos like this, which explain that neither cutter or kuh-TAR are correct but that cutter is closer to the Arabic pronunciation.

But that video is just made by a dude who (allegedly) knows Arabic so I decided to look for more “official” sources like Sheikh Hamad bin Jassim al-Thani, the former prime minister of Qatar. In the video below at around 0:23 he clearly pronounces it as kuh-ter, which is a little different from cutter which some people pronounce like butter but a lot different from kuh-TAR.

At this point, I started to think that the true Qatar pronunciation was somewhere much closer to cutter than kuh-TAR.

Is everybody is right?

So on board my recent first class A380 flight from Paris to Doha (read about that amazing flight here), I decided I would put a flight attendant on the spot. So I asked the cabin manager what the proper pronunciation was. And the she told me….

Either pronunciation is correct!

She said I could go with cutter or kuh-TAR. That definitely was not the clarity I was looking for. I was hoping this would be a black and white issue. But it did feel good to at least hear that from an employee of Qatar Airways since it gave me a little bit of closure. This was also in line with other sources that stated that even Qataris differ on how they pronounce it depending on where in Qatar they are from.

So it sounded like either version would fly. But I wondered how people within my niche would pronounce it. These people are well-traveled and cultured, and I figured that I could rely on them for guidance here.

After my Qatar flight, I decided this would be a perfect question to put in an Instagram poll. So I set up the poll and after a couple of hundred votes, the results came in overwhelmingly in favor of kuh-TAR! 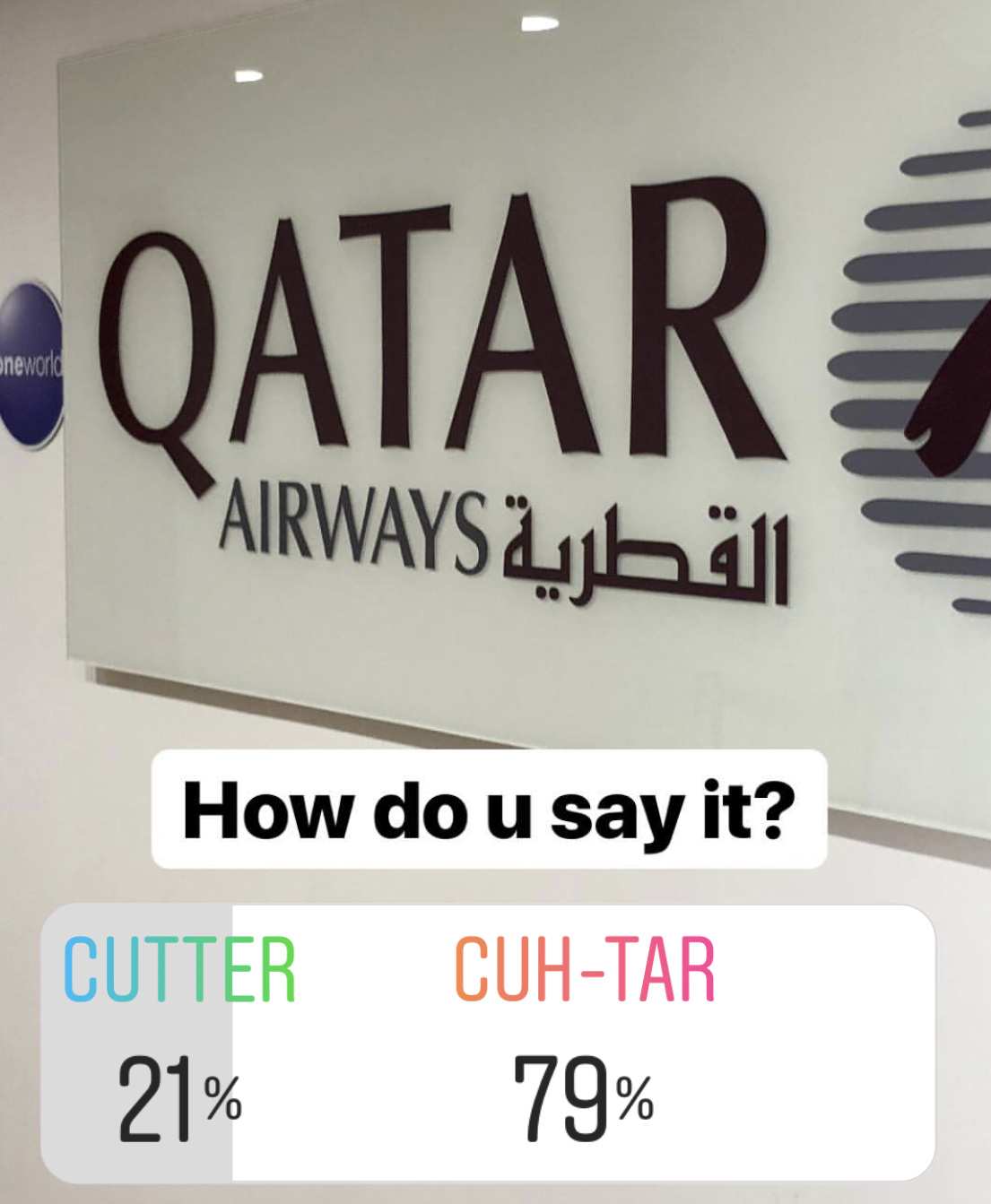 Final word on the Qatar pronunciation

In the end, I came to the following conclusions about Qatar pronunciation:

I think for the sake of making my life easier I’m going to use kuh-TAR since when I try to use cutter I end up having to use kuh-TAR to clarify what I’m talking about. But deep down inside, I think I’ll always be on team cutter since it seems closer to the most authentic way to pronounce Qatar in Arabic.