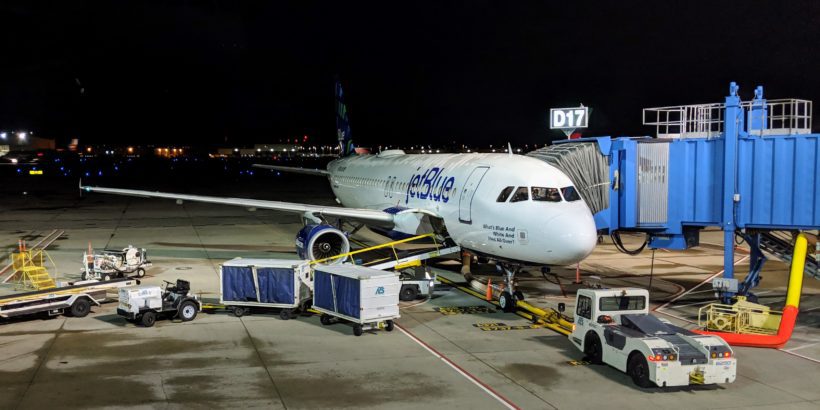 Airlines in the US are getting absolutely pounded right now due to the fallout from the coronavirus. JetBlue’s CEO recently was quoted as saying that he thinks the impact from the disease is going to be (or is already) worse on the airline industry than the effect of 9/11.

“In the US industry, we saw about a 30 percent drop-off in traffic around 9/11. This is probably even worse than that.” — JetBlue CEO, Robin Hayes.

If you keep up with the stock market then you know that things are pretty bad right now.

The S&P 500 has now entered a bear market and just experienced the worst drop since October 19, 1987, which was also known as “Black Monday.” This has also resulted in Wall Street officially ending its longest bull market run in history.

But if you think things are bad for the S&P 500, things are even much worse for the airlines right now.

Airline stocks for the major US players are down between 33% and 53% year to date. Yes, you’re seeing that right.

American Airlines and United Airlines have especially been hit the hardest. Meanwhile, Southwest, JetBlue, and Alaska Air dropped an average 18%.

After September 11, it took airlines 22 months to get back to pre-9/11 levels but many are optimistic that the airlines will bounce back quicker than that due to the nature of the cause (a temporary pandemic vs open ended war against terrorists).

One thing that is slightly encouraging is that in China’s air traffic has already started to pick up over the past few weeks. During the peak of the outbreak in late February, China dropped down to 25th in global market share. However, recently China has returned to second place, according to data from OAG Aviation Worldwide.

But to realize the full picture you need to dive a little bit deeper.

Almost all of the flights that have occurred in China are domestic flights so things have definitely not come close to being back in terms of international travel.

“Of the 2.9 million scheduled seats returning to the Chinese market, all but 3,000 are on domestic services” – OAG Aviation Worldwide.

Also, China has been absolutely slashing airline prices in order to get people to travel. They have seen prices drop as low as 5% of their original purchase price in some cases.

So all of these facts make you wonder what will happen to the US airline industry over the next few months. It would seem like the bounce back would be quicker than the bounce back after 9/11 just because most people are less freaked out by terrorist attacks and war then they are by something that resembles the flu and likely only wreaks havoc for a few weeks/months.

But if we are truly entering into recession territory then growth could be slowed and the climb back could be much slower for airlines like United who depend a good deal on business travel.

I think that consumers should be on the lookout for super cheap fares as things start to slowly head back to normal in April/May. I’m not saying that we will see prices down 95% but we might see some significant discounts and we might see a fast bounce back in domestic travel similar to what China has seen.