One of the first things I learned after I came out was that coming out is a constant process. You are continuously deciding whom to come out to and when.

Whether it is a new job, new neighborhood, or a fellow fan sitting next to you at a ballgame, you are constantly choosing whether or not the situation warrants you revealing that side of yourself at any particular time.

For someone like myself who some describe as a “straight acting” gay person (yes, I hate that term) 99% of people that I meet assume that I am straight.

I can’t tell you how many people genuinely have thought that I was joking when I first hinted that I was gay.

In fact, there is even a moment where I can just see the gears turning in their head as they realize I am not the heterosexual they initially thought they were talking to.

So when I am checking in to a hotel and I reference my spouse, I almost always get asked things like, “When will she be arriving?”

I always make it a point to correct them and explain that the “she” is a “he.”

I don’t correct the hotel staff on pronouns because I’m offended or want to be a jerk, I do it because I believe that some people need simple reminders that anybody they are dealing with could be gay.

When traveling domestically I rarely think twice about coming out.

But when going abroad, coming out requires a little bit more contemplation, especially when traveling to destinations in countries where homosexuality is illegal and subject to criminal punishment.

And that can make things interesting.

A situation that I often run into is having a nice conversation with someone who assumes I am straight and essentially being forced to come out as the convo gravitates toward hooking up with women.

And as you might imagine this gets tricky in locations not known for being friendly to gay people.

When staying at the Hyatt Ziva in Jamaica (a country Time magazine once labeled “the most homophobic place on Earth”) there was a waiter who insisted that we (Brad and I) go over to a table of girls to hit on them.

Initially, I didn’t care to come out to him.

He had a thick Jamaican accent and was a little hard to decipher but we were having a good “bro-to-bro” conversation, chatting about things like the different hotspots in Jamaica and debating the merits of jerk chicken.

As our conversation went on, I could sense that revealing my sexual orientation to this fellow was going to catch him off guard.

I did not want to ruin the vibe, so I tried to steer the conversation away from the girls.

But after he returned to our table several times and would not let up about playing matchmaker with these girls, I decided that it was time to let him know that Brad and I were a (recently) married couple.

Once I dropped the news, it was as if time stopped for a second and right on cue that bamboozled look I am so familiar with was all over his face.

The conversation sputtered for a few seconds and eventually returned close to the lively level it was before — but it wasn’t quite the same after that.

The table visits were shorter, the eye contact was fleeting, and there was no enthusiastic “come back and see me tomorrow!” 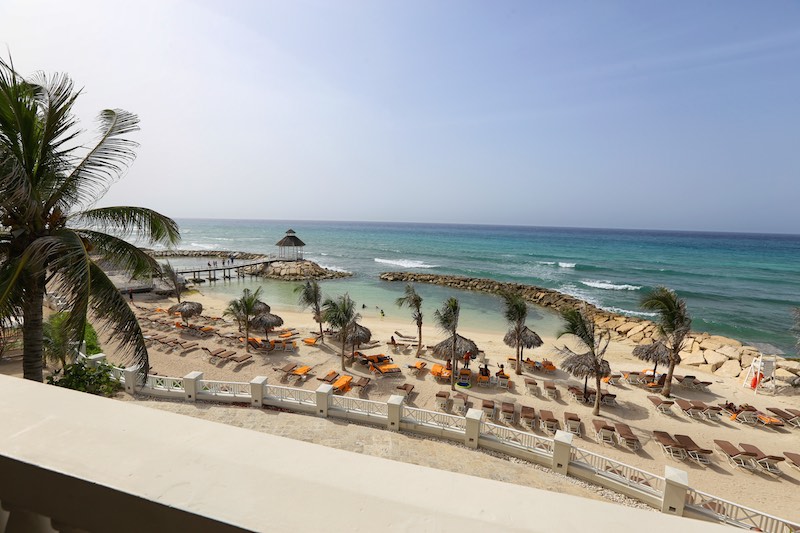 Sometimes, even when you are not pressured into coming out and things appear to be going smoothly, the feeling that you are behind enemy lines does not completely dissipate.

On our trip to the Conrad Maldives last year, I was very curious as to how Brad and I would be treated.

The Penal Code of the Maldives adopts Islamic Shariah Law to punish homosexual acts through prison sentences, fines, and even lashings.

So understandably, someone in our shoes could be a little reluctant to visit.

But from the moment we stepped foot on the resort, the staff was extremely warm and welcoming and we felt right at home.

In fact, when we had lunch at the underwater restaurant, there was another gay couple dining under the sea as well. 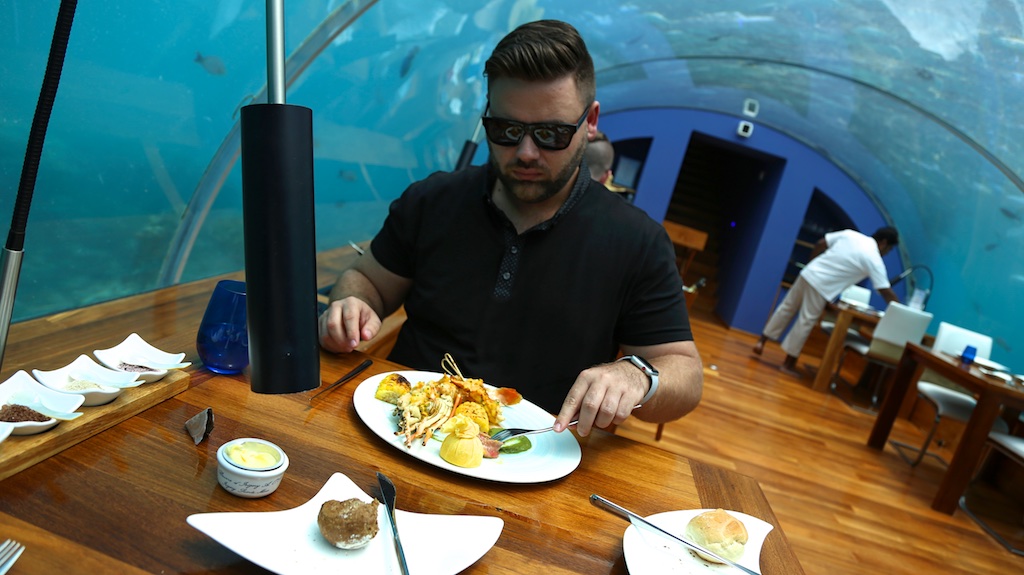 Even though I never got bad vibes from the staff, paranoia still found a way to creep inside my head during our stay.

The first night there, Brad and I sat relaxing in the hot tub located in the back of our secluded overwater villa.

The night sky was filled with stars and all you could hear were the bubbling whirlpool jets and soothing ocean waves below.

It was the definition of a perfect travel moment.

That is, until Brad looked like he saw a ghost.

I turned around to see what he was looking at and there was a man rummaging inside our villa!

Was he some sort of anti-gay government spy?

Was this a man who was going to report us to the government for “homosexual activity?”

Was shit about to go down?

Turns out that we forgot that we had put in an order to get the TV fixed earlier that morning and it was a repair man from the resort working on the TV. 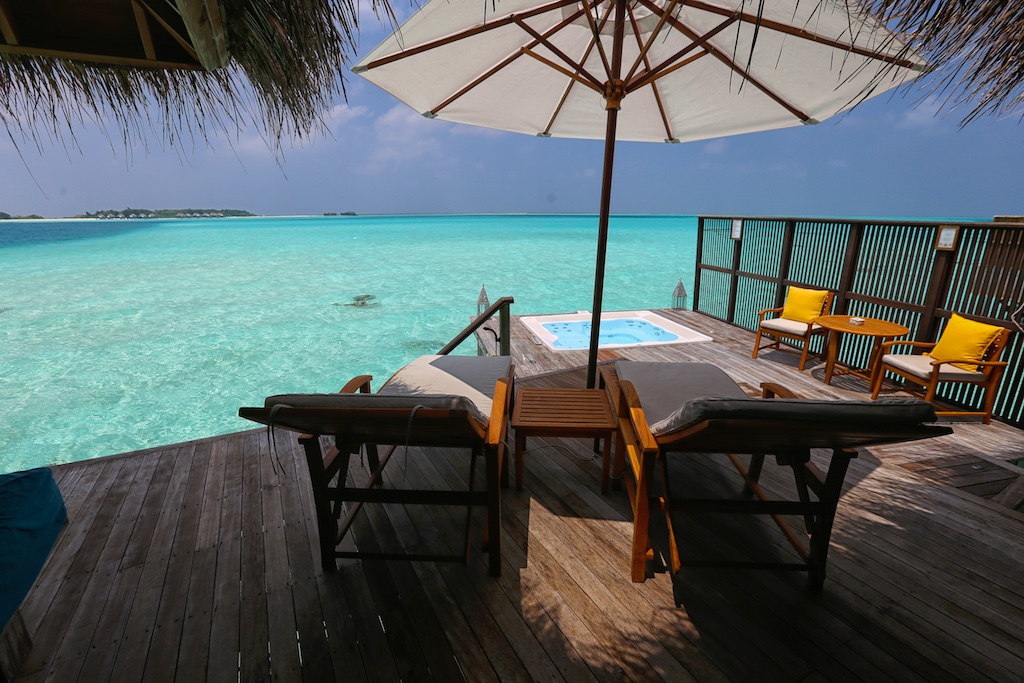 Worrying about coming out when traveling in countries that have homosexuality criminalized in the books can mean added stress.

But other times a nice surprise awaits you on the other side of that stress.

In 2018, Brad and I were able to fly the new Singapore Airlines suites on our anniversary, February 22.

For those that don’t know, Singapore is another country that has stiff rules on homosexuality. Same-sex sexual activity is illegal (even if consensual and committed in private).

Knowing this, I still contacted the airlines beforehand to see if they could do anything special for our anniversary.

In the emails, I was purposely a bit vague about the gender of my partner, even though they would clearly see that he was a man when looking at the itinerary.

I was vague because I wasn’t sure how acceptable it would be to make a request like that, especially since Singapore Airlines is owned by the Singapore government.

I didn’t want to ruffle feathers (or worse, put us at risk of some sort of adverse outcome) but I also did not want to let our anniversary go unacknowledged on such an amazing flight.

They brought us out a cake and even gave us two teddy bears with our names hand stitched onto the bears (which they stitched on during the flight).

I noticed that there was a “boy” and “girl” version of the bears (my name was stitched onto the girl). While that might be such an insignificant detail to some, my mind immediately drew up a scenario.

I imagined a staff meeting where a table of executives discussed how to handle “teddy bear distribution” for homosexual anniversaries in their first class suites.

The compromise born out of this would be that traditional male and female bears would be used for gay anniversaries.

As this ridiculous scenario played through my head, a flight attendant placed a huge card next to the bears.

Once again, I saw another symbol of a traditional male and female couple, located on the right side of the card. I took a closer look at the huge card.

It was covered in signatures and little scribbled messages from a lot of crew members.

And then I noticed a little image of two little bears sketched near the bottom. These were clearly two “boy” bears.

Another scenario popped into my head.

I thought about a flight attendant sitting there trying to think of something to write on this card and them thinking about how offering traditional male and female symbols to a gay couple could dampen an anniversary celebration.

I pictured this person going out of their way to sketch this little picture just to show that: hey we might not have the perfect system in place for recognizing your same-sex relationship via stuffed teddy bears, but I am going to go out of my way to show you that your relationship is just as special to us as anyone else’s.

It felt like progress and it was the perfect touch to our anniversary.

Pursuing romantic experiences in places like these as a gay couple is admittedly asking for somewhat of a bumpy ride.

But, in my experience, there is little to worry about at many of these places if you use common sense, and some destinations might even surprise you with how welcoming they will be.

I’m not saying to let your guard completely down, since these draconian laws are still alive in the books and outside of resort areas, things can get very real.

But the world is changing quickly, and I think there are more reasons to be excited than afraid for gay people who want to enjoy romantic experiences abroad.

And I also believe that by showing up to these locations and interacting with locals, you help to breakdown stereotypes and erode prejudice. It might be a small impact but it is an impact nonetheless.