I recently used a free night to stay at the Hyatt Regency in Downtown Houston. It’s an older hotel in the heart of Houston and I’ve always been curious about the hotel, since it hosts a lot of events in Houston. This review covers my one night experience at the hotel. As mentioned, I booked this stay with a free night given by the World of Hyatt Card. This is one of the top hotel co-branded cards and has a lot of benefits, such as bonus points on the following categories:

The card also comes with the ability to earn free nights and to climb up the elite status tiers of Hyatt.

The Hyatt Regency Houston is located on the northwest side of Downtown Houston on Louisiana Street, which is where you’ll find many of Houston’s corporate offices. This location is great if you need to make your way to these nearby towers but if you want ultimate convenience to the George R. Brown Convention Center, Toyota Center, or Minute Made Park, you might want to look into the Marriott Marquis or Hilton Americas.

The hotel has a direct connection to Houston’s extensive tunnel system, meaning you can likely avoid going outside during the hot summers when accessing other buildings in downtown. You’ll see the entrance to the tunnels marked by a sign in the corner of the main lobby floor.

The tunnels can get a little confusing so I’d recommend taking a photo of the map so that you don’t get lost down there.

You can find several shops and restaurants in the tunnel system so if you’re hungry but not sure what you’re in the mood for you can just wander down there and see what you find. You’ll be able to find some local places and other chain restaurants/fast food places.

You can enter the hotel through the main entrance on Louisiana Street or pull through for valet, which is actually on Polk Street. The valet was not very attentive at all when we arrived so hopefully we just caught them on a bad day but valet is $39 per night.

This pull-in off Polk Street is also where you’ll find access to the large parking garage. The parking garage is $20 per day and doesn’t offer in/out privileges.

The main lobby feels pretty open and looks up to a 30-story atrium, which is one of the biggest that I’ve seen at a Hyatt hotel. The look is similar to the Hyatt Regency in Dallas that has a similar atrium look and was also built in the 1970s.

The hotel’s rooms and lobby underwent $40 million renovation in 2008 and while the interior is nice, it definitely still has a retro vibe to it. On the lobby floor you’ll find different dining options and facilities. There’s an Einstein Bros Bagels on the ground floor which also houses gifts and another snacks/drinks. This store can also be accessed via a side door which can be an easy way to get in and out of the hotel. You can also call them directly from the phone in your room and presumably put in orders to go.

Shula’s Steakhouse is the main restaurant in the lobby and it’s a nice but casual steakhouse.

There’s also the LobbiBar which had a lot of comfortable seating options surrounding the bar area. This area does pick up in traffic around happy hour but it’s a good place to relax and enjoy your meal.

One cool feature at the Hyatt Regency is the Spindletop restaurant which is a revolving restaurant that sits on top of the hotel and offers a unique way to enjoy dinner. I’ve still never eaten there but it seems like a pretty romantic option for a dinner.

There’s a designated line for World of Hyatt members for check-in but since there was not a soul in line I just went over to the standard check-in line where the staff already was.

Check-in went smoothly and since I was a Discoverist member, they bumped me up to a room to the 29th floor, which is the 2nd to highest floor at the hotel. These rooms were going for over $200, so I thought this was pretty good value for our stay, and I’m a huge fan of rooms on high floors so I was excited to see what the view would look like.

I then made my way to the elevators, which are found directly behind the check-in desk next to a FedEx office. They elevators are a little hidden but it’s also hard to miss them ascending in the atrium.

Their elevators worked very well and were extra spacious. They also have glass walls so you can get a nice view of the hotel’s atrium or some views of the city like Heritage Plaza seen on the right in the image below.

After making my way quickly up the elevator, I was off to find my room on the 29th floor. The atrium view from so high up is a bit trippy when you look directly down from the balcony overlooking the lobby.

The entrance of the room has a small shelf and counter area where you can find coffee supplies and in our case, two complimentary bottles of water. There’s also a spacious wardrobe with an iron and iron board inside. The room was pretty nice and about what I expected from the Hyatt Regency. The view was pretty decent as well. 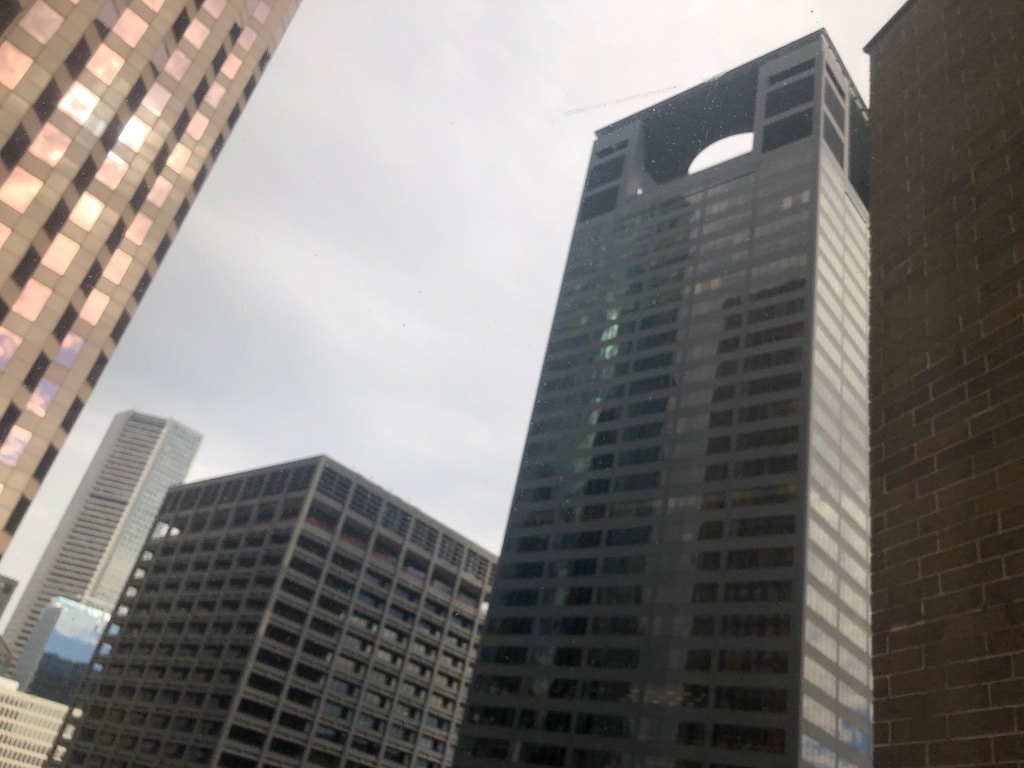 However, when I checked out the bathroom, I noticed that the toilet seat had not been cleaned and there was a distinct urine stain which was pretty disgusting (I’ll spare you the photos). So I called the front desk and told them about it and they offered to move me to a different room on the same floor and give me a $25 hotel credit and I accepted their offer.

So then I made my way to the new room and didn’t have any issues with it being clean. The bedding and pillows were very comfortable and I actually got a great night of sleep.

I liked that there were outlets/charge stations on both sides of the bed. 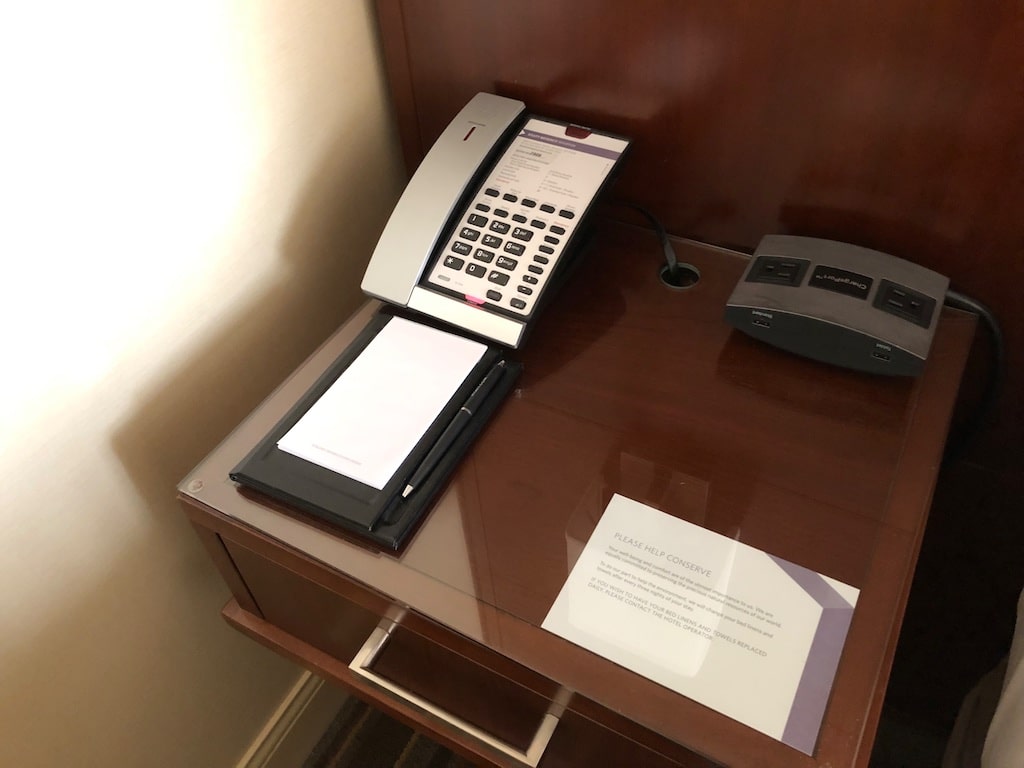 One thing that surprised me was how big the TV was. I believe it was a 55″ TV which is something that I’ve rarely seen at hotels but was very nice.

It was nice to see a small mini-fridge in the room but it was also kind of an odd placement for a fridge. There was also a little desk area with an ergonomic chair with a nice butt pad on it for extra comfort. And then a chaise lounge which I found very comfortable and actually got a lot of work done it. The bathroom was pretty nice although I’m not a huge fan of the open showers. 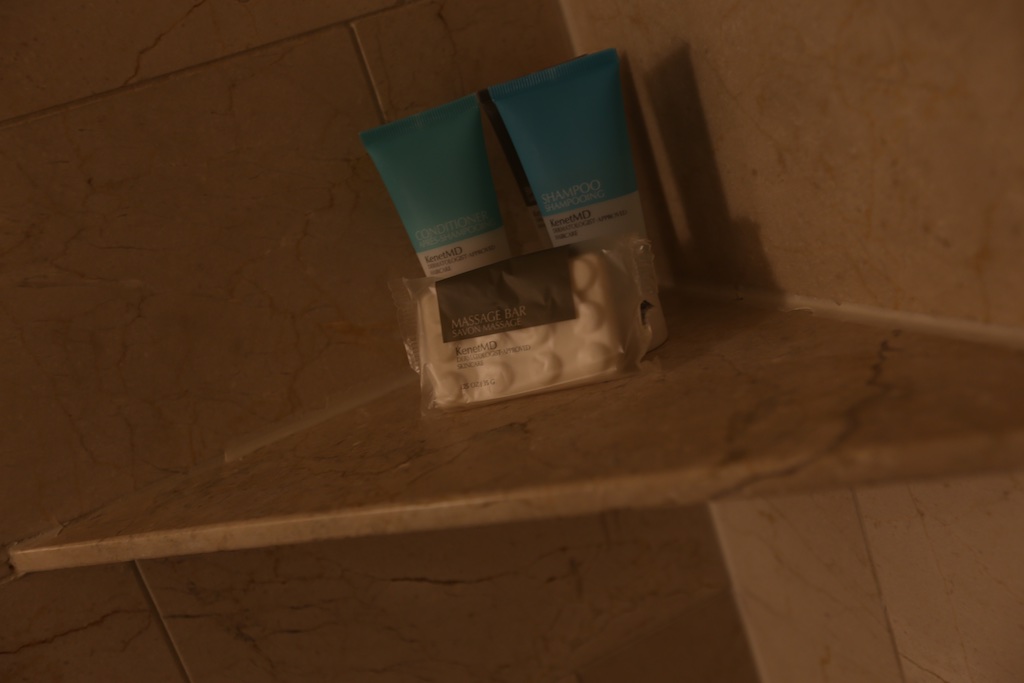 The sink area also only had one sink but plenty of counter space. The views from this room were much more open and I could see all the way to the Houston Galleria area. We caught a pretty magnificent sunset while we were there and so I really appreciated the upgrade to the higher floor on this stay.

My only complaint was the window was pretty dirty/scratched up which made it hard to appreciate the views as much.

We were only at the hotel for one night and while we didn’t try out their restaurants, we did try the room service.

I went with a bacon cheeseburger with fries and while it might not look that tasty in the photo below, it was actually really good as were the fries.

Brad went with some pasta dish which he really enjoyed.

We also tried out the cheesecake but it was flop.

Overall, I didn’t expect many frills in our room at the Hyatt Regency Houston and there weren’t any. Aside from the initial issue with the first room, I was happy with the room.

There’s an outdoor pool area that’s heated in the winter and has plenty of lounge chairs set up all around the pool.

The area surrounding the pool is actually pretty expansive and would be a nice place to get some fresh air and take a quick break from the work day.

They had a few outdoor TVs set up on the wall but with the cover and the glare, it was pretty much impossible to see what what actually on TV. In the evening, it’s probably not so bad. I was really impressed with the Hyatt Regency gym, which is open 24 hours. You’ll need to take some stairs down from the lobby or take a special elevator to access the gym.

There’s a small station with cooled towels, infused water, and even disposable headphones if you need them.

One thing that was odd is that you needed to hit a special button to exit the gym. It kind of freaked me out that I couldn’t open the door to leave at first so I can’t say that I’m crazy about this feature. This was an interesting stay. First there were a few things that didn’t go so well.

The valet service was not attentive, the first room’s bathroom was disgusting, and there were some issues at check-out. They charged us 3X the price for valet and did not give us the $25 credit they had promised us. So I had to call in to get that taken care of. The staff was apologetic about it all so it wasn’t a huge deal but that was the third negative on a short stay.

So overall, I’d say this was a solid stay and if you’re coming to do business in the Houston area (especially in north Downtown area), I think this is an excellent property to go with.