If you’re heading to the Maldives and staying at the Hilton Conrad Maldives you absolutely want to consider scuba diving. It’s probably one of the best places to dive with manta rays and if you catch it one a good day, it will be a dive that you’ll surely never forget. Here’s a review of our recent dive at the Manta Point, also known as Rangali Madivaru where we embarked on a quest to swim with manta rays.

I tried scheduling our dives via email and was told to book it all in person when we arrived. Since we had a shorter stay, this almost meant that we couldn’t dive but we got it worked out at the last minute.

So next time we go, I’m going to insist on booking the dives via email just to make sure it all goes smoothly.

The total cost for one dive for two people (with full equipment except dive masks) came out to $283 USD or $141 per person — not nearly as bad as I thought it could get considering this is the Maldives we’re talking about.

Our one dive was out to Manta Point. It’s a manta ray “cleaning stations” which means that it is a prime location for manta ray encounters, which had me very excited.

However, the instructor told us that we probably won’t see any manta rays because of the conditions/time of day. I was really bummed because we only had time for one dive and seeing the manta rays was one of the biggest motivating factors for heading to the Conrad Maldives in the first place (I chose to visit during manta season between December and April).

Although I was worried about missing the rays, luck would be on our side for this trip. By the way, if you want to read about the best times of year to visit the Maldives, click here.

If you have been away from diving for more than 3 months and/or have done less than 30 dives, then you’ll have to go through a short orientation course. This is very similar to a intro to scuba course only it’s even shorter. They currently offer these at 9:10am or 3:30pm and they do not charge you extra for them.

These courses are required under Maldivian law and so there’s no way to get around it. After getting refreshed on the equipment they take you to one of the beaches where you’ll submerge a few feet and then show your basic skills like clearing a mask, finding and clearing your regulator, etc. Then you’ll get to swim around a little bit just to get comfortable in the water.

For those who haven’t been on a dive in a while, it’s a great refresher although the water is very murky by the beach and you don’t really see much.

We did our intro course and then came back a couple of hours later when we could dive later on that day.

Heading out to the dive

After meeting up and then making our way over to the boat we were ready to get things started. I love the boats they use in the Madlives. Not just because they look cool but they are also very practical.

In addition to being flat-out charming, the boats are spacious and come equipped with bathrooms and plenty of seating under the shade. It’s definitely not the same look you’re used to seeing when diving in the US and Caribbean.

The racks for the diving equipment and dressing areas also aren’t too cramped so you don’t have to fight for real estate as you get ready to dive. The staff from the Conrad was also very nice and accommodating, making the entire diving trip a smooth experience. I didn’t time the ride out to Manta Point, but it’s very close and I want to say it only took close to 10 minutes from the time of departure to the time we were getting ready to dive.

On our dive, we only had two other divers with us so the boat was mostly empty. Our instructor who took us through the orientation dive came with us on the trip though I think another dive master was heading the dive. As soon as we broke the water we were immediately greeted by some fish, which I always take as a good sign. Once we reached about 30 to 40 feet we started to make our way over the reef. I can’t recall the visibility that day but it was decent, though I’ve certainly seen better on other dives.

As soon as we hit the reef, I could tell that this dive was going to be a good one — there were fish everywhere. 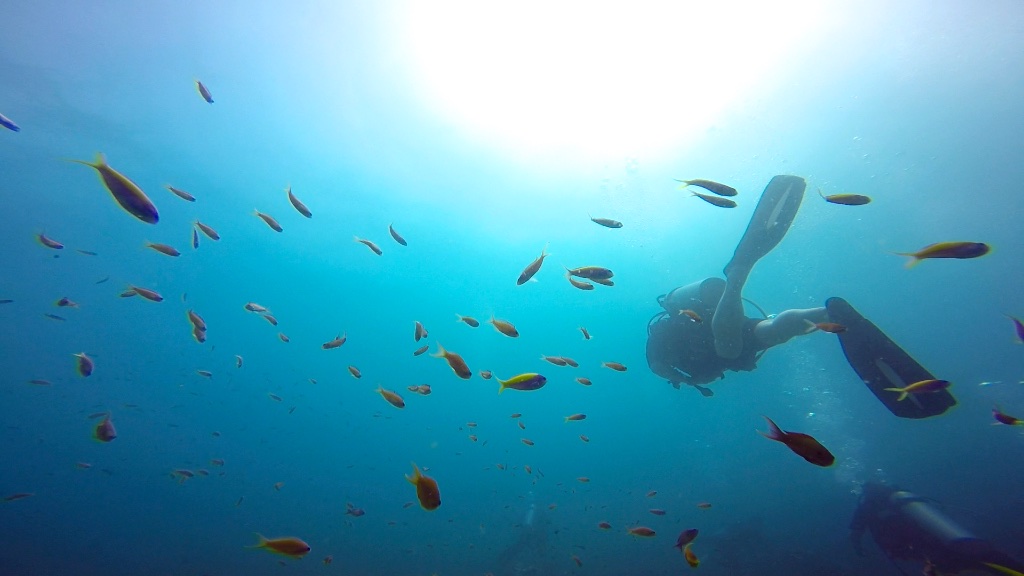 I’d never ran into unicorn fish until coming to the Maldives (at least not ones that I could remember seeing) but they are some interesting looking fish and they came in different varieties: dark and light.

One thing I loved about this dive was that it was absolutely teeming with bright and colorful wildlife. There were schools upon schools of fish that we swam though during the dive. Sometimes there were so many that it made it difficult to spot other fish. As we made our way through the dive, we came across a few titan triggerfish which are fish that get highly aggressive during mating season and will attack you if you swim over their lair. I think that we were there a couple of months before that season so they were tame but you definitely don’t want those things coming after with you with their snaggletooth fangs.

In the Maldives, clownfish and sea anemones seem to be everywhere. We saw a lot while snorkeling at Rangali Island and plenty of them while scuba diving as well.

We also saw a clown triggerfish, which I don’t think get as aggressive.

We also saw a lot of sea stars.

We actually missed the giant sea star pictured below and I didn’t notice it until reviewing the footage but that thing is a monster. You can see it at the very bottom of the photo below.

We also spotted a couple of eels. They are such beautiful creatures but my God they are terrifying to me.

While we didn’t see any sharks (others did), there were tons of other fish who made appearances throughout the dive. 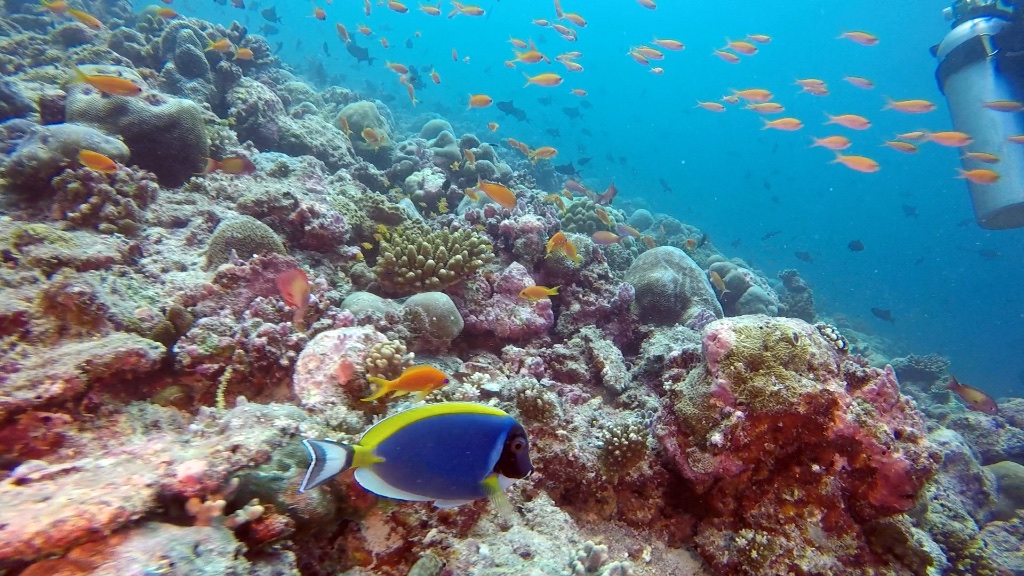 At one point I noticed one of the coolest looking fish I’ve ever seen but I almost missed it. I think it’s a some species of a stone fish based on its appearance. Those are highly toxic (the most venomous fish in the sea) and able to camouflage very well. They can also survive up to 24 hours outside of water, which is pretty crazy.

Here’s another look in case you missed it.

As we made our way over the reef, there was only a slight current and it was easy to navigate. 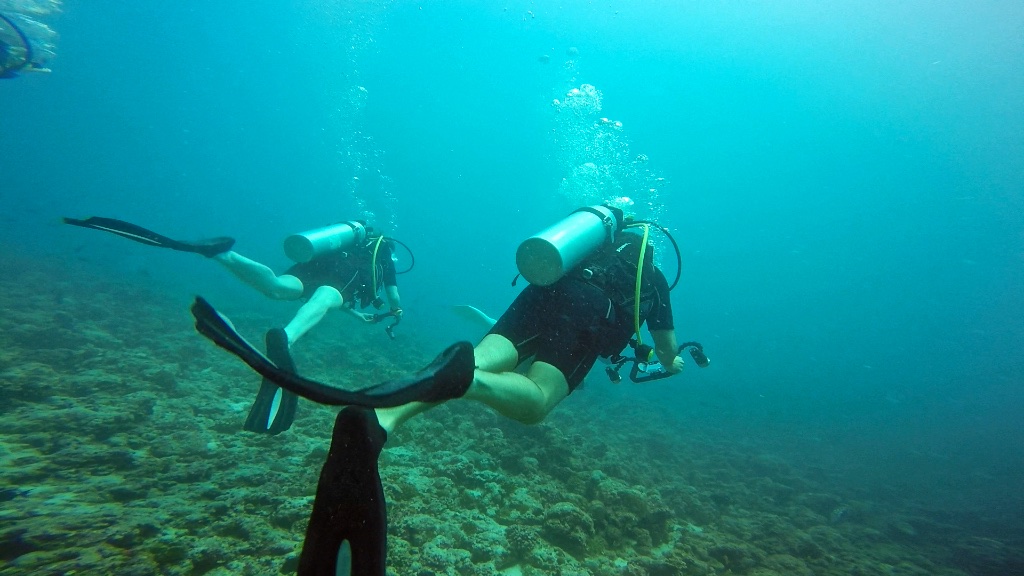 I love sloping reefs like this because you can easily pick your depth and then adjust as you wish. It’s also easy to move as a team since everyone can pick their own lane/depth.

About 10 minutes into our dive, we got our first glimpse of a majestic manta ray. It’s an amazing experience to encounter these creatures underwater when scuba diving. We’d snorkeled with whale sharks before but that experience was a bit hectic and chaotic and didn’t really compare to being submerged in a peaceful environment with the manta rays.

When the manta rays first appear, all you can make out is their faint silhouette. It’s hard to determine what it is you’re seeing but when you see those distinct pointy wings, you know it’s one of them.

Then more details emerge as they get closer. And before you know it, they’re flying right above your head with some buddies underneath hitching a ride. We stayed stationary at the sighting of the manta rays and they approached us on their own, sometimes getting very close. 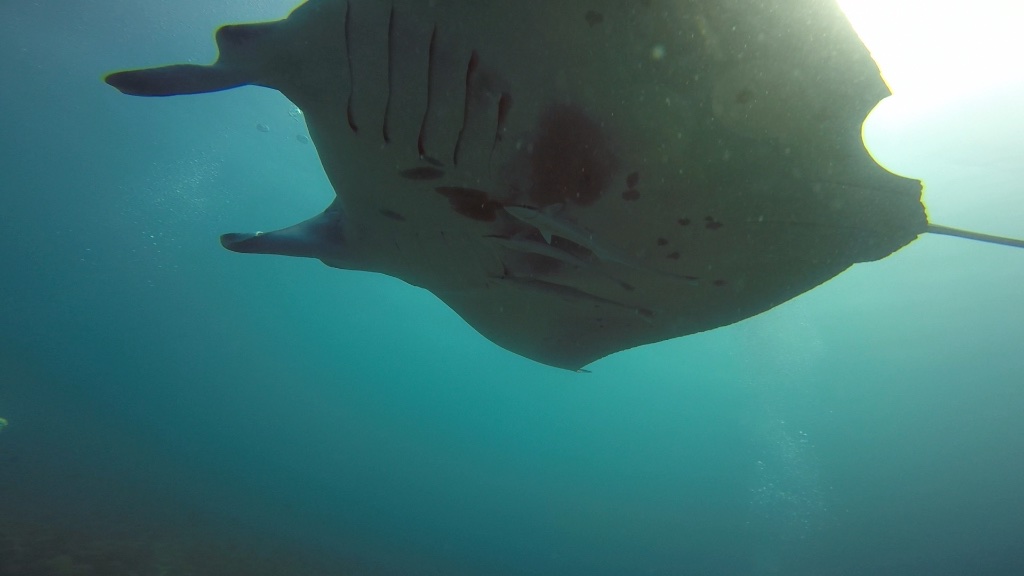 This one had a very distinctive piece missing from it in the shape of a bite mark.

The manta ray came and went and I was fully satisfied with such an amazing encounter with the ray that I would’ve been okay to end the dive right there. But we kept on making our way down the reef and within a few minutes we encountered another manta ray, gliding through the water table.

Words can’t describe how graceful these creatures are in person. Until you see how effortlessly they move through the ocean in person, it’s hard to appreciate how amazing these gentle giants are.

This particular manta ray was very sociable and decided to come over and investigate us, getting even closer then the last one did. Even though you know they’re harmless, it’s still a little nerve-wrecking when they approach you because they’re just such massive animals.

It’s a surreal feeling to look these creatures in the eye, too. You can tell there’s something going on in there. They’ve got the biggest brains out of any fish and while I realize that’s not exactly saying a lot, there’s evidence that these animals might even be self-aware. Some of their brain cells are physically more like those found in birds and mammals than in fish and they are known for being playful and curious. After a couple of minutes another manta ray showed up and the duo spent time showing off their graceful strides. 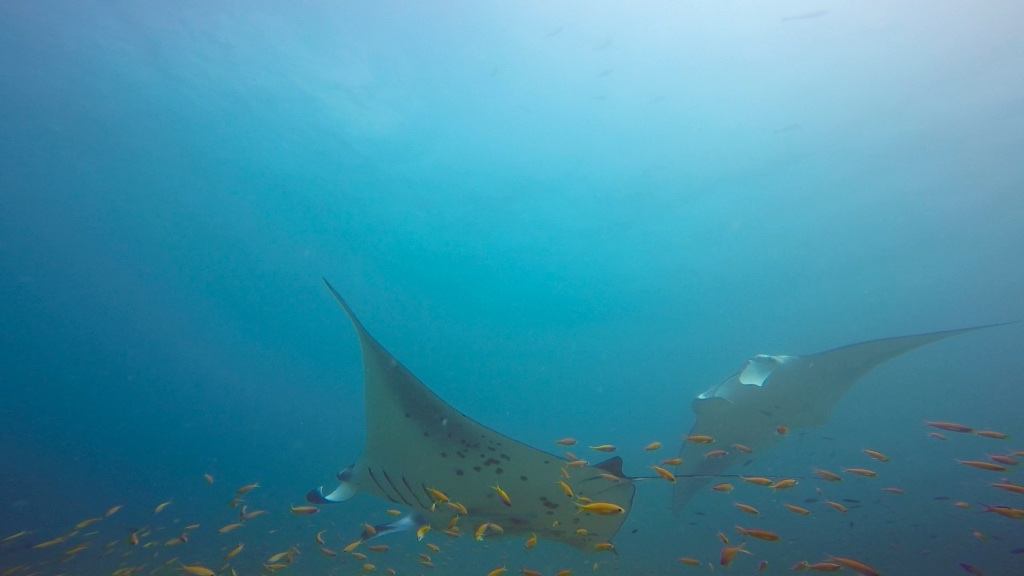 After the second manta ray encounter our dive wrapped up and then we ascended for the safety stop. I had a bit of a botched safety stop and broke the surface of the water but luckily we weren’t diving very deep and I never had any issues from it (thankfully). The deepest I ended up going was 56 feet but I don’t think I stayed at that depth very long.

If you’re a scuba diver and headed to the Maldives, swimming with manta rays should be a top priority. And if you’re staying at the Conrad Maldives then it’s the perfect opportunity to swim with these animals and you should try to make your way there during peak season.