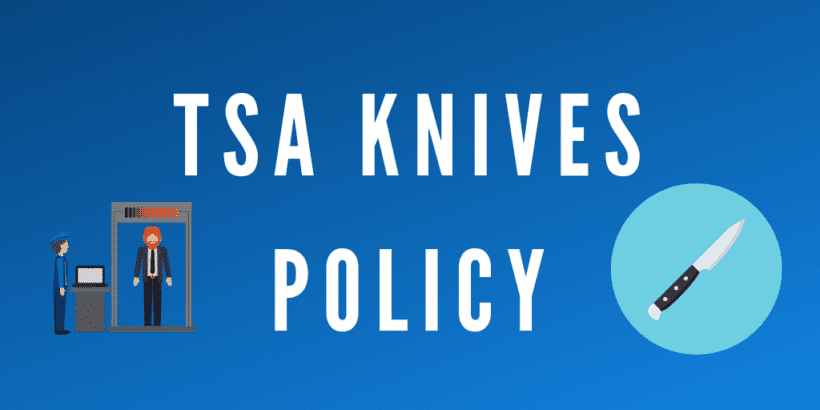 Are you wondering whether or not you can bring knives through TSA security and on to a plane? The answer isn’t so clear to a lot of people due to past policies that were implemented and then later reversed. But in this article, I’ll tell you everything you need to know about bringing knives through airport security and on board your plane. I’ll cover the TSA rules for both carry-ons and checked baggage and also talk about some other sharp objects.

Can you bring knives through the airport?

You may pack certain knives and pocket knives in your checked baggage but you cannot bring them in your carry-on, unless an exception applies. Keep reading below for more details on the TSA rules for knives.

The new Amex Gold Card comes with an outstanding 60,000 point offer after spending $4,000 within the first 6 months! In addition, you can earn bonus points on categories like 4X points at Restaurants and 4X points at U.S. supermarkets (up to $25,000 in spend per calendar year). Learn How to apply!

The Platinum Card comes with a welcome bonus of 75,000 miles after spending $5,000 within the first 6 months. This card is also loaded with benefits which include: lounge access, elite status, a $200 annual Uber credit, and 5X on airfare! Learn How to apply!

Knives in your carry-on are never allowed, except for “plastic or round-bladed butter knives.” (Round-bladed means that they are not serrated.)

Besides these exceptions, there are no “TSA Approved” knives that you can bring on to a plane. Remember that in general, you are prohibited from traveling with any sharp objects in your carry-on baggage

The penalties for bringing a knife in your carry-on can be quite stiff. For example, you could get hit with up to a $2,050 fine if you’re caught with a knife since they fall in the banned category below:

You may pack knives and pocket knives in your checked baggage but you still need to comply with the rules. TSA states that “[a]ny sharp objects in checked bags should be sheathed or securely wrapped to prevent injury to baggage handlers and inspectors.”

So you don’t want to have a knife sitting loosely in your checked baggage. Instead, ensure that your knife is packed in such a way so that it is securely covered or wrapped just in case an inspector were to open up your bag for an inspection and start digging through your belongings.

You might be a little bit confused about the ban on small knives since at one point it looked like TSA was going to allow those knives on board. In 2013, TSA decided to allow small pocket knives to be brought aboard aircraft.

There were certain size regulations, such as requiring the blades to be no longer than 2.36 inches long and no wider than 1/2 inch. The knives also could not have certain features such as a molded grip or a locked or fixed blade.

Why on Earth would they think this was a good idea?

Well, according to the TSA they believed that doing so would allow the airport screeners extra time so that they could focus on fining more dangerous objects like bombs, IEDs, etc. They also stated that due to reinforced cockpit doors, small knives were not a major threat to hijackings.

But after TSA announced this, there was major pushback from the airlines, unions, and government officials. Many flight attendants didn’t feel safe knowing that passengers could be equipped with knives (even if they were very small knives).

Three days before the new changes were to go into effect, TSA decided to do more consulting regarding the changes and they eventually scrapped the changes altogether. So to this day even small knives such as pocket knives are not allowed on a plane.

What about other sharp items?

When in doubt about bringing a sharp item as a carry-on, just don’t bring it. But if you’re trying to bring along a common sharp items like scissors then make sure you’re in compliance with the TSA rules. For example, you can bring scissors but only if they are less than 4 inches from the pivot point.

Here’s a list of common sharp objects that you might want to bring. Below is whether or not they are allowed as carry-on items. Generally, you’ll notice that many small, common household items like safety pins and nail clippers are allowed.

“TSA officers have the discretion to prohibit any item through the screening checkpoint if they believe it poses a security threat.” This means that even if an item is not prohibited and is allowed, an agent could still see it as a threat and not allow it to go through. That’s why I recommend you to store your sharp objects in your checked baggage if possible.

Can I bring a knife in my carry-on?

You are NOT allowed to bring a knife in your carry-on except for “plastic or round-bladed butter knives.”

What is a TSA approved knife?

There are no TSA approved knives except fo “plastic or round-bladed butter knives.”

What is the fine for bringing a knife through airport security?

You could be charged a fine of over $2,000 if you are caught with a knife.

Can I bring a knife in my checked baggage?

Yes, You may pack knives and pocket knives in your checked baggage but you still need to comply with the rules.

TSA states that “[a]ny sharp objects in checked bags should be sheathed or securely wrapped to prevent injury to baggage handlers and inspectors.”

What if the knife is shorter than 2.36 inches?

Knives are no longer allowed even if they are shorter than 2.36 inches.

Can I bring a pocket knife on a plane?

No, you are not allowed to bring a pocket knife on a plane.

Traveling with knives through airports is generally something I try to avoid. But when dealing with TSA you absolutely want to make sure that your knives are not in your carry-on so that you don’t get hit with a massive fine. Also, be aware that other sharp objects might not be allowed in your carry-on so always be on the lookout for restrictions.