There’s one attraction near Cape Town that’s an absolute must if you are visiting the area. It’s an attraction that I didn’t think too much about while planning my trip to South Africa, but it ended up being one of my favorite experiences during my entire round the world trip. I’m talking about the penguins at Boulders Beach near Simon’s Town, South Africa. These penguins are the epitome of cuteness and the ability to be among them in their own habitat is something that no zoo experience can compare to. Here’s what you need to know about visiting these cuddly penguins at Boulders Beach.

Boulders Beach is about a 45 minute car ride from Cape Town, along some very scenic terrain. A lot of people combine a visit to Boulders Beach with a stop to the Cape of Good Hope on Cape Peninsula as it’s only about an additional 30 minutes to the the Cape of Good Hope. As of the day of this article, the entry fee for adults is ZAR 65 which comes out to less than $5 USD, so it’s very cheap.

Boulders Beach is impressive by itself

First, I just had to point out that even without the penguins, Boulders Beach is a beautiful Beach that would be worth a visit.

It’s surrounded by giant granite boulders that are estimated to be 540 million years old (and are great for rock hopping) and the water is crystal clear. What’s more, the boulders and topography of the beach allow it to be shielded by the winds and waves making it a safe place to swim even for families.

When to visit the penguins of Boulders Beach?

According to the local officials, the penguins are at the beach year round. They state that during September and October their numbers are limited since they are mostly out fishing in the sea. However, we visited in the middle of September and we were greeted by plenty of penguins (though it wasn’t like some of the photos I’ve seen with hundreds of them hanging out on the beach).

The best time of day to see the penguins is apparently early in the morning or in the late afternoon. Our morning visit just after opening (8 am) was perfect as we didn’t run into any other visitors and the penguins seemed to be out and about in good numbers.

The open hours may vary depending on weather, holidays etc. but the hours for Boulders Beach are stated as:

How did the penguins get there?

The penguins are African Penguins, also known as jackass penguins, due to their loud braying which you will definitely hear when you visit. They inhabit a few colonies in South Africa and even Namibia but Boulders Beach is reportedly one of the most renown and best places to visit them.

These penguins are actually originally transplants that came over near in 1983 from Dyer Island. Dyer Island is a couple of hours east near Gansbaai and forms part of the borders of the famous Shark Alley, where great whites feast on seals (and from what I’ve heard on penguins, too). 🙁

When the penguins came over to Boulders Beach they discovered a plentiful supply of food (pilchards and anchovy) and the colony blew up and now is said to be home to over 3,000 birds. The African Penguin’s population is still nowhere near where it once was (about 50,000 now compared to over 1.5 million before), but nature reserves like Boulders Beach are doing their part to restore their population.

The coolest part about going to Boulders Beach is that you’re able to walk and be among the penguins in their natural habitat. If you’re like most people, your only encounter with penguins has been at a zoo, but this is lightyears more exciting than any zoo experience you may have had.

You can also view the penguins from neighboring Foxy Beach. That area has wheelchair friendly platforms and offers great viewing opportunities of the penguins and more penguins are usually in that area than at Boulders Beach. However, I’m not sure that you can get out and walk around like you can at Boulders, so I’d plan on visiting both if you have the time (we spent all our time at Boulders since it was so entertaining).

When we first arrived to the beach we didn’t notice any penguins on the beach or in the water and so I was a little bit nervous that we wouldn’t see much. In fact, all we found were these husky marmots that were running around the rocks and sunbathing in the sand. While adorable in their own right, they weren’t quite the tuxedo-wearing penguins we were looking for.

But after a few minutes, we spotted the first trio of penguins waddling out of the pathway and onto the beach as if they were making an entrance in a sports arena.

I couldn’t get enough of them and could have watched them waddle around all day. I took tons of photos, but I think it takes watching a video of them to understand why exactly you’ll be wanting to adopt a penguin before you depart to go back home. 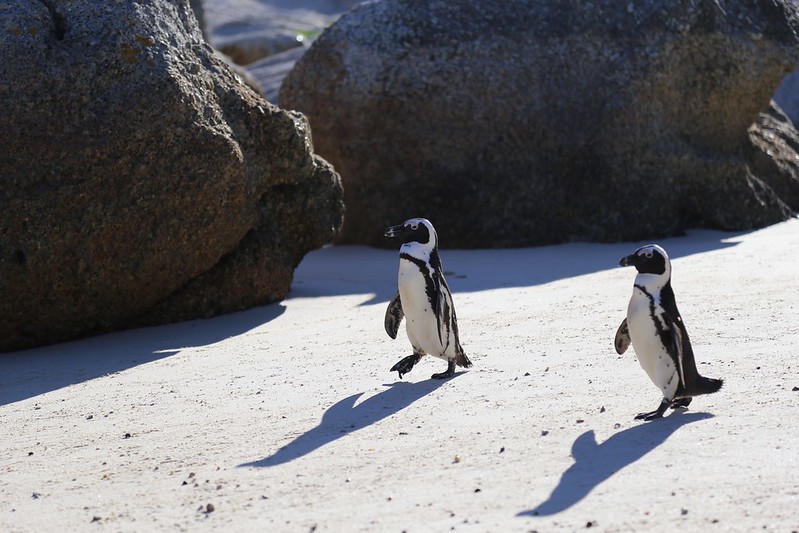 You’ll be tempted to the max to take selfies… 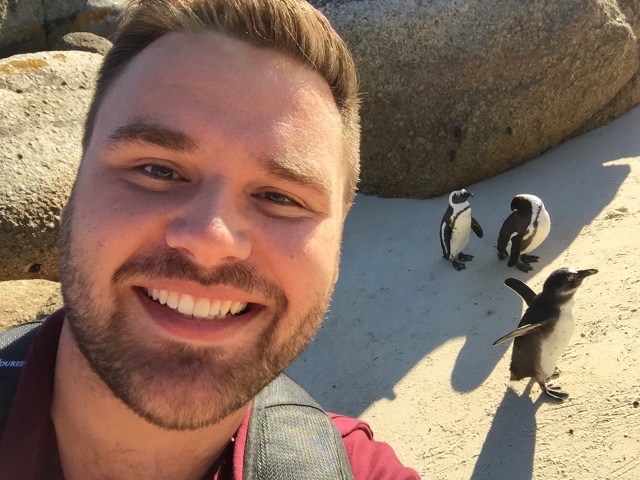 It’s probably the cutest thing you’ll ever see, especially when their little penguin feet patter into the ocean and then they belly-flop into the water where they become like little torpedoes darting around freakishly quick.

Yet, when the penguins aren’t shooting around underwater, you’d almost mistake them for ordinary ducks.

But once they back come out the water and pop back up to their feet, they take their unmistakably penguin appearance back on.

After three penguins came out, then about every couple of minutes an additional pair or quartet would come waddling out of that pathway. 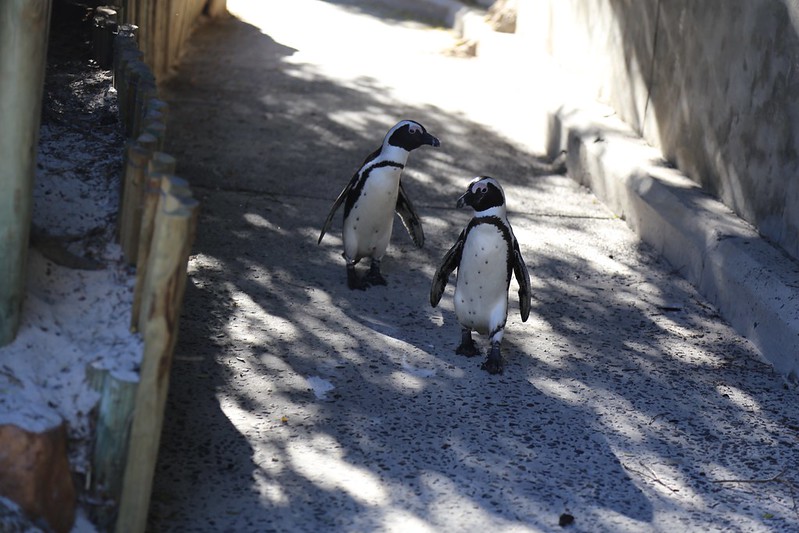 A couple of them veered towards us and were very curious about what we were.

One in particular, who looked like a juvenile, followed us around wherever we went.

They warn you that the penguins can get a little bit aggressive and take a nasty peck at you with their sharp beak, so we kept our distance a little bit. However, for the most part these animals seemed very docile and were not shy and will even come right up to you or walk by you within inches.

As more of the penguins came out, they started congregating in huddles, where they would squawk at each other and give each other these funny sideways looks, which I guess is how they communicate. 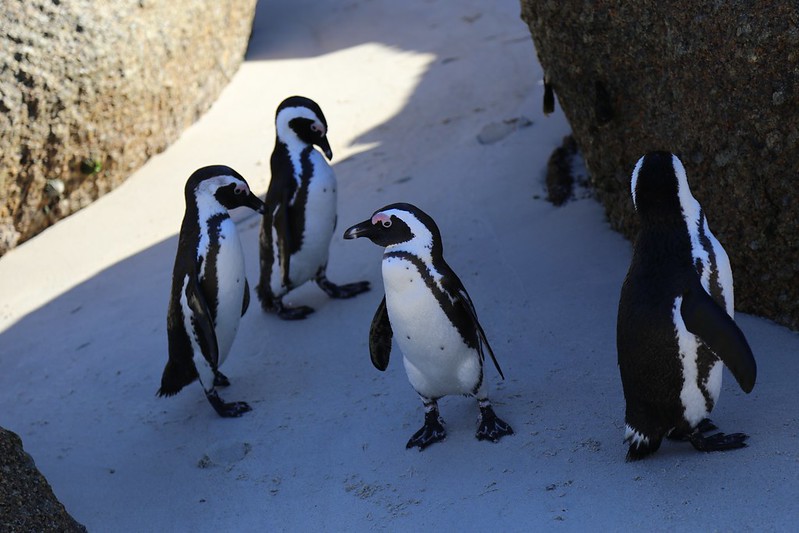 Sometimes they looked just like humans having normal conversations out in public.

Then, after meeting up in a huddle they would all simultaneously head towards the water and get back to their underwater antics, sometimes chasing each other around in circles. 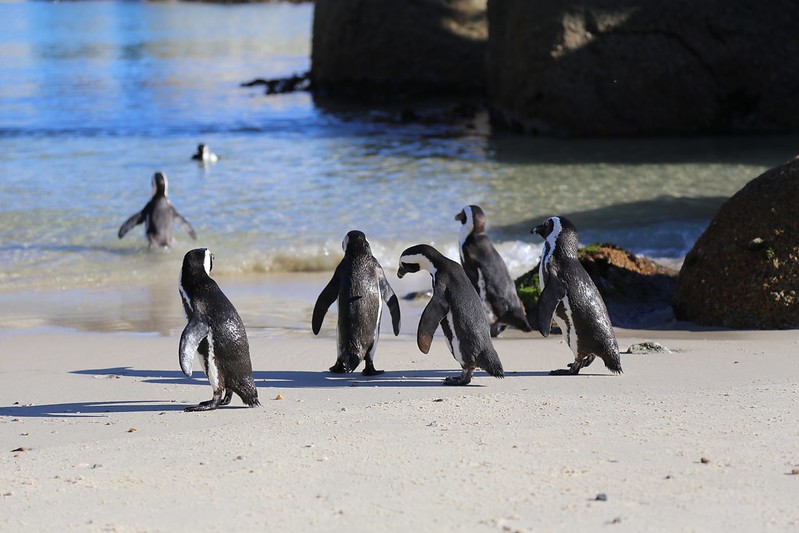 They always seemed to strike these interesting and funny poses. 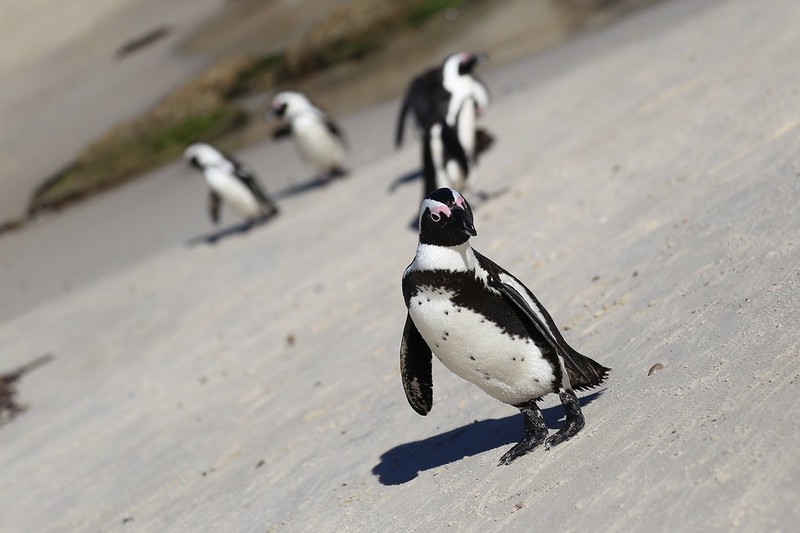 Outside of the water, penguins could be spotted on top of the boulders, sliding down rocks, and even hopping down a flight of concrete stairs.

After about 30 minutes, the penguins seemed to be everywhere and their relentless braying came from every corner of the beach and was especially loud when you got close to the bushes, where I think a lot of the penguins were still hiding.

Besides the marmots, we came across a few tide pool creatures like sea stars, although this one looked like it’d been through some tough times.

One definite surprise guest was what I think was a sea lion, although I guess it could’ve been a seal. It looked like it was practicing its morning yoga the entire time as we looked on.

Boulders Beach is a unique experience that I think someone of any age will enjoy. You can’t deny the cuteness of penguins and when you witness them in person they’re 10X more entertaining than you probably imagined them to be in the first place. Add in the fact that Boulders Beach is a beautiful beach in in its own right with nice boulders to climb around on and you can see why I consider this is a must-stop for everyone coming to Cape Town.