The British Museum is often considered one of the top things to do in London. That should come to no surprise as the museum is free to enter and holds a vast collection of at least 8 million objects. One of the most fascinating facts about the museum is that only 1% of those objects can be on display at once, mostly due to light sensitivity. Even with only a small fraction of the objects on display, however, there is plenty to keep you occupied for hours.

This article is by no means a comprehensive look at the exhibits of the British Museum but rather a highlight of some of the key exhibits and attractions that we looked at, such as the Greek Parthenon Exhibit and a few other key sites like the Rosetta Stone and the Easter Island Statue.

I always have my DSLR camera on me and really enjoy bringing it to museums so I was happy to find out that the British Museum allows cameras (just no tripods without a permit). Another good thing about the museum is that they allow backpacks in as well. In fact, I was a little astonished as to the ease of access into the museum. No ticket line. No security line. You just walk through the entryway and then you’re looking up at the beautiful, bright interior of the British Museum and on your way to explore.

The first thing to see for us was the Rosetta Stone. I’ve been wanting to see that for a long time and was really excited to finally be able to see it in person. Predictably, on a Friday afternoon, the museum was pretty packed and the Rosetta Stone exhibit was no exception. It was difficult to get any decent photographs due to some tourists who allowed their LED screens from their audio guides to reflect off the glass right in the middle of the stone. I was tempted to ask some to simply flip it around but there appeared to be language barriers and I figured I’d just wait it out. After a couple of minutes I was able to get close enough to try and get some shots. Luckily, the stone is huge so it’s not hard to get a view of it, just be ready for crowds.

What is the Rosetta Stone?

For those who don’t know the Rosetta Stone is a stone with engravings in two scripts of Greek and one script of Egyptian (that is, two languages, three scripts). It was carved around 196 BCE and went undiscovered until 1799 when it was discovered by French soldiers. After a couple of decades of intense study, scholars were able to decipher the meaning of the hieroglyphics contained on the stone and thus the Rosetta Stone paved the way for our modern understanding of Egyptian hieroglyphics. Considering how vital this giant stone was to our understanding of the Egyptian culture, I had to see it in person. 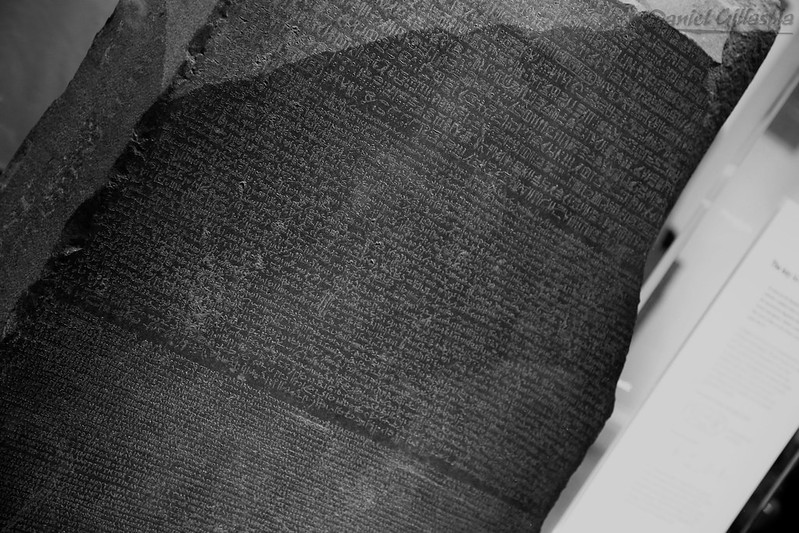 After viewing the Rosetta Stone, we wandered throughout the Egyptian collection on the first floor. There were plenty of other beautiful sculptures and relics to see. Some of the pieces that stood out to me were the remains of different tombs and temples. And of course, there were several pharaoh sculptures to admire as well.

The rest of the Egyptian collection is on the third floor. The emphasis on that gallery is on life and death and it’s where you will find all of the coffins, mummies, and masks associated with Egyptian burials as well as a lot of the ancient scrolls and other items like jewelry. That’s also where you will find a lot of the crowds. The Egyptian exhibits upstairs were by far the most crowded of all that we visited so perhaps you’d like to put that first on your agenda.

The next big thing we wanted to see was the Easter Island statue. Easter Island, known as “Rapa Nui” to local inhabitants, is an island far off the west coast of South America. It’s famous for its stones like this one that are known as “moai.” The British Museum claims that these figures were probably carved from 1000 AD until the second half of the seventeenth century.

The statue pictured here is known as “Hoa Hakananai’a,” which means “stolen or hidden friend” and dates back to around 1000 AD. The statue is made up of basalt, a hard volcanic rock that is very difficult to carve into. Though eyeballs are missing now they were once present and likely made of stone. It’s a very imposing statue and I enjoyed seeing it as it’s very possible that I may not ever be fortunate enough to make my way to Easter Island. Unfortunately, it’s pretty much a stand-alone piece so there’s no Easter Island exhibit to and you’ll be on to other galleries pretty quickly.

After the Egyptian and a few other galleries, we made our way over to the Greek exhibits, which as a whole, were my favorite. Specifically, I think that the Parthenon marbles had the biggest “museum effect” on me. 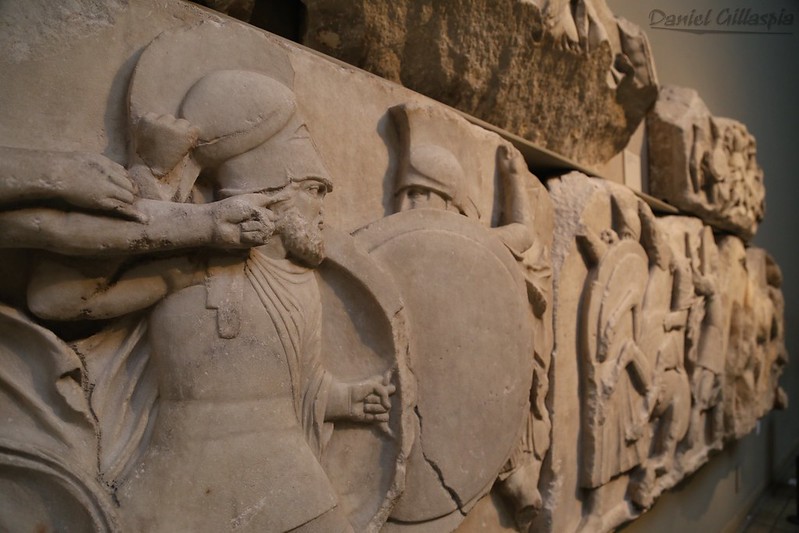 If you didn’t’ know, the Parthenon is considered one of the world’s most marvelous monuments and considered to be one of, if not the one, best example of Greek architecture. Dedicated to the goddess Athena, it was finished at about 433 BCE and served as one of the grandest Greek temples ever known. Although damaged by war, it remained at least partially intact through centuries up until today.  Not only does the Parthenon serve as the perhaps the most enduring symbol of Greek culture and democracy, but the sculptures of the Parthenon are considered to be some of the pinnacles of Classical Greek art. Many of these sculptures depict battles while others reflect mythological scenes. 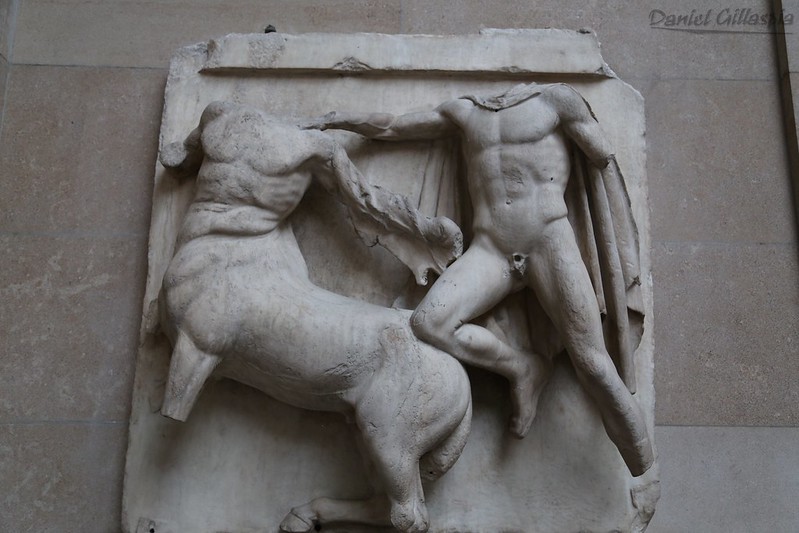 For me personally, this was an opportunity to see up close and in person, the timeless art of one of the most influential civilizations that ever walked the planet (I know there are heated disputes over whether these sculptures should be returned to Greece but I’ll just put that debate on the side for now). After spending time admiring these sculptures, I realized that these must have been created by some of the most well-respected artists alive at the time. Artists whom I knew nothing about. 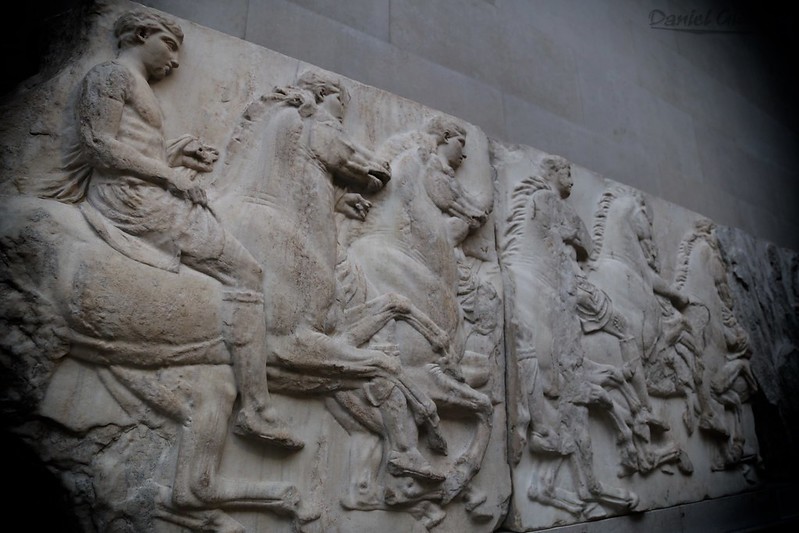 As I looked closely at the details of these fine sculptures, it was apparent to me that there were stories behind them all. Stories, again, that I really only possessed a superficial understanding about. It was just that realization — that I lacked a real understanding of these cultural expressions — that provided me with a sense of inspiration to gain understanding. I’m not sure what it was about the Greek sculptures that did it but after only a few minutes in the Greek exhibit, I found myself feeling what I call the “museum effect,” where I find myself inspired to further my understanding of a subject after experiencing it at a museum.

This is one of the major reasons why I visit museums even when I don’t necessarily always enjoy them. The problem with museums for me is that I mostly enjoy being active (e.g., climbing things) and museums don’t exactly offer me much in terms of that. However, every once in a while I enjoy the slow pace of a museum experience and walk away from it a bit inspired to take on an understanding of something else. It’s usually nothing obsessive like I’m going to dedicate my life to learning about that particular thing. It’s just that I usually feel some sort of obligation to further my understanding of the subject. In this case, it’s Greek culture and it starts with the art.

It’s funny how quickly you begin uncovering facts about things that otherwise would seem insignificant if it wasn’t for the “museum effect.” For example, just yesterday, I found out that the sculptures at the Parthenon were actually painted with color originally and were not the pure white we see today. Apparently, when these sculptures were discovered during the Renaissance excavations they were without their color and from that point artists thought they were “continuing” the tradition of sculpting marble in its natural white state.

And sure, the fact that these sculptures likely used to beam with color doesn’t necessarily fundamentally change my understanding of Greek civilization (though for some art historians it probably could). At best, this might be a random fact I mention to someone else IRL once or twice when the opportunity arises. The point is that I’m on my way to adding another layer of understanding to yet another culture. And that’s really one of my biggest goals for travel in general: to just keep laying those bricks down and building upon my knowledge while discovering (and of course experiencing) more and more about different civilizations and the places where they exist.

I should also mention that we made our way through some of the other exhibitions, such as the Americas and Asian exhibitions and thoroughly enjoyed those. By that time we were running a little short on time and I’d made the decision to do less photo-taking and to just try to enjoy the museum. We happily left some galleries untouched as we planned on leaving some exhibitions unseen and wait for the next time that we could venture to the museum.

Overall, I think the exhibitions in the museum are extremely well presented. My only real complaint with the museum was the “shopping-mall” feel that it had to it at some places. That’s mostly the product of it being free and inundated with so many tourists but there seems to be somewhat of an issue of enforcements as well.

I understand there’s probably nothing the museum can do about the noise factor in such a busy museum but certainly personnel could be in place to keep others from putting their hands all over the exhibits and blasting objects with their flash photography. We were only there for about an hour and a half to two hours and yet I couldn’t believe how many people I saw touching some of the objects and paying no mind to their camera flashes. Because of those reasons and mostly the crowd factor, it can be difficult to have a true intimate museum experience here.

Still, not every exhibit was full of the type people described above and the enjoyment I experienced far outweighed the annoyances during my visit. Like I said, I walked away from the British Museum inspired by the beautiful Greek art on display and eager to investigate further; I saw one of he most renowned pieces of history, the Rosetta Stone; and I had a look at hundreds of other pieces of history that span centuries of different civilizations and still left plenty more to see for next time. In short, it was a fantastic museum experience.