American football is by far my favorite sport to watch, especially live. I’ve been to over 30 college football games over the past few years but never once had I made it to an NFL game. I’m still not quite sure how that happened but this past weekend I finally got the chance to see my first NFL game and got see the Dallas Cowboys on Remembrance Sunday. Here’s a look at my experience and what you can expect if you make to Wembley for an NFL game.

The game day experience started as soon as we boarded the train toward the stadium as we were confronted by a Redskins fan. As we continued to hit different stops towards the stadium, I spotted more and more NFL fans boarding the train and the game day “feel” started to hit me a little bit. There was a little bit of banter exchanged between everyone on the way there but it was all in good fun and before we knew it we had arrived at Wembley. The stadium, by the way, is located right next to the Wembley Stadium Tube and Railway station so it is extremely convenient and easy to access the stadium.

Finally, we arrived at the stadium. I’d seen it numerous times as I travelled past it on the train but this was my first time to get a good look at the entire structure. I had done some research on the stadium beforehand, and I was surprised to find out that Wembley Stadium (rebuilt in 2007) was one of the most expensive stadiums ever built in the world at $1.5 billion USD. That’s more expensive than Cowboys Stadium ($1.3 billion) and just as expensive as the new Yankee Stadium. It’s also a large stadium with a capacity of 90,000. For comparison, the biggest NFL stadiums in the US usually barely hit 80,000 (which I find unusual considering that several college stadiums pack as much if not more fans).

It’s easy to tell that the stadium is new as you approach it. Everything from the concrete steps outside the stadium to the exterior glass walls have a fresh look to them. One of the architectural marvels of the stadium is the gigantic arch that rises 440 feet high and is the largest free-standing arch in the world. It’s an impressive structure that gives the second largest stadium in Europe a unique look and feel as it sometimes changes color throughout the night.

The facilities in the stadium are quite nice as well. Bathrooms are pretty big and very clean and there are several food options, such as chicken tenders, beef pies, and even fish and chips. Of course, the food was a little on the expensive side but for £5-6 for a chicken basket the prices were not nearly as bad as I’ve seen in certain stadiums.

One of the big things I didn’t know was whether my camera would be allowed in the stadium. I brought my Canon 6D with 24-105mm L series lens. It’s a pretty bulky camera so I was little worried. I had heard that as long as my camera lens was shorter than 20cm they would allow me to bring it in but when I emailed Wembley they basically told me that it would be up to the discretion of the workers at the front. Anytime “discretion” is involved with something like that I get nervous, but I was pretty confident that I’d be able to talk my way into bringing it in.

When we went through security I was asked if my camera was a “wide-angle lens.” I wasn’t sure if I should answer yes or no to that partly because I don’t really consider my lens to be wide-angle and partially because I wasn’t sure what would be held against me. After equivocating a bit, they let me through but told me that someone might stop me for my camera later on. I wasn’t sure who would stop me but nobody ever said anything to me and I was able to go about the stadium using my camera freely.

Arriving at the Stadium

We didn’t show up super early for some of the NFL festivities but we did get there about 2 1/2 hours before kickoff (the stadium opens its gates 3 hours before game time). Once we showed up we headed right to the Holiday Inn to pick up the tickets we had ordered via Stubhub. It was quick and easy to get our tickets and Stubhub gave us complimentary lanyards, sunglasses and a few other things.

About two hours before kickoff there was a steady stream of fans both inside and outside the stadium. That’s when I first realized just how diverse the fan base was going to be at the game. I saw fans sporting jerseys and beanies from just about every NFL team. And some of these fans weren’t just dressed casually. You would have thought the Packers were playing with the number of Green Bay fans dressed in full cheesehead attire. It almost had an NFL convention feel to it. Very different from any football I’d been to before but very cool. 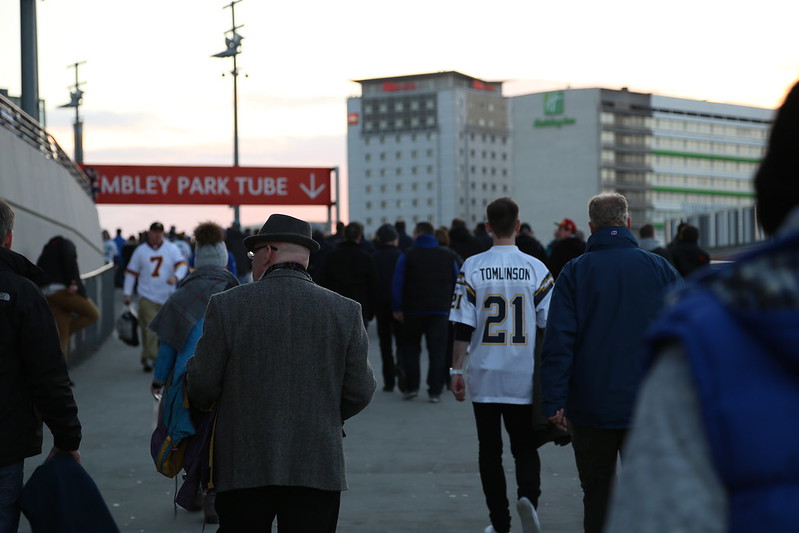 Because the game was being played on Remembrance Sunday the NFL put on special poppie-themed display of remembrances. The ceremonies started with a giant poppie being unveiled at mid-field along with a moment of silence for all those who have fallen. Next, they brought out a giant American flag and British flag for the playing of the national anthems. Everyone had a plastic sheet to hold up at that time and it was meant to transform the stands into a huge display of red poppies all round the stadium. I’m not sure that the poppie display looked as good as they had hoped, but it was a nice touch to the Remembrance Day theme. 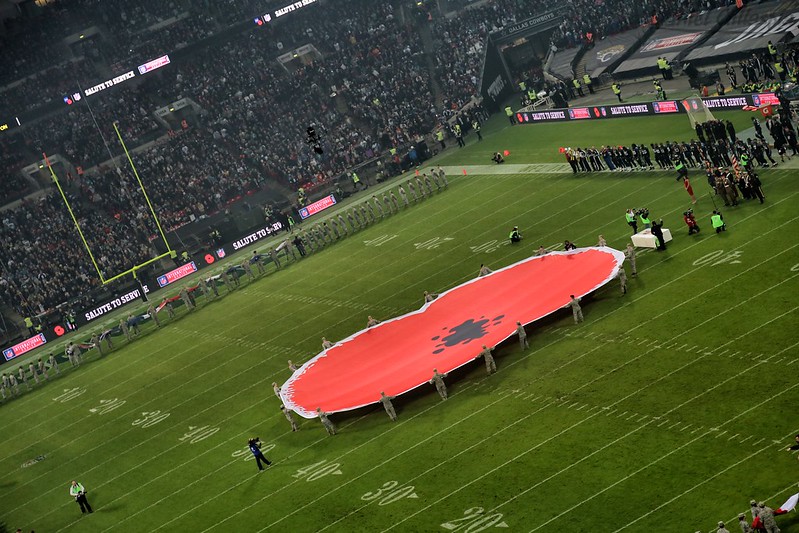 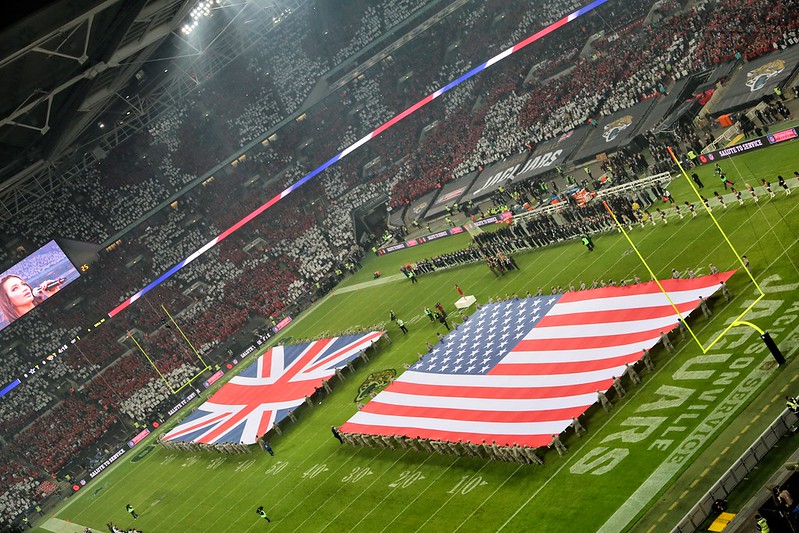 It was cool to hear the Star Spangled Banner being played in a stadium overseas; that was something I’d never experienced before. When they played God Save the Queen the crowd really got into it and it even gave me goosebumps. After that, a brilliant display of fireworks lit up the stands in different reds and purples and it was finally time to start the game. 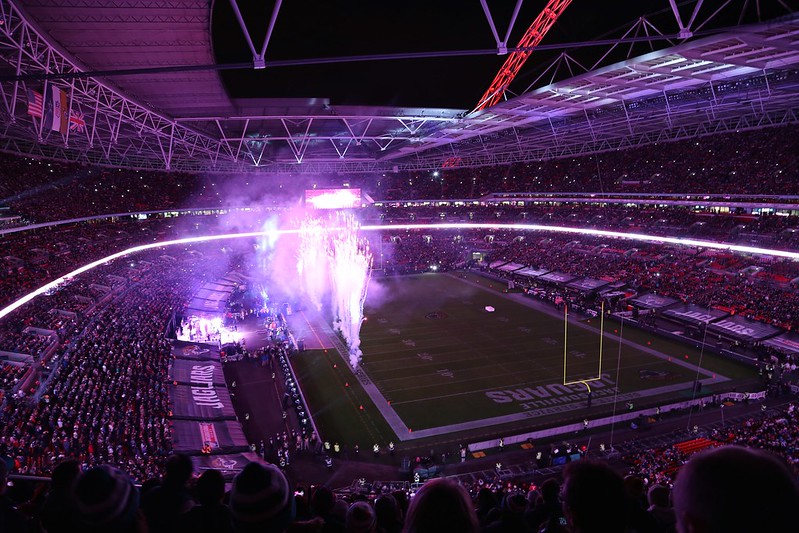 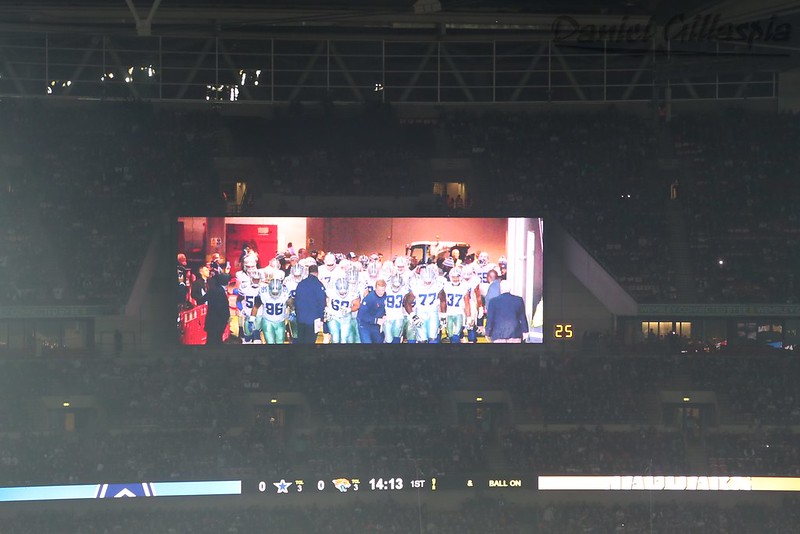 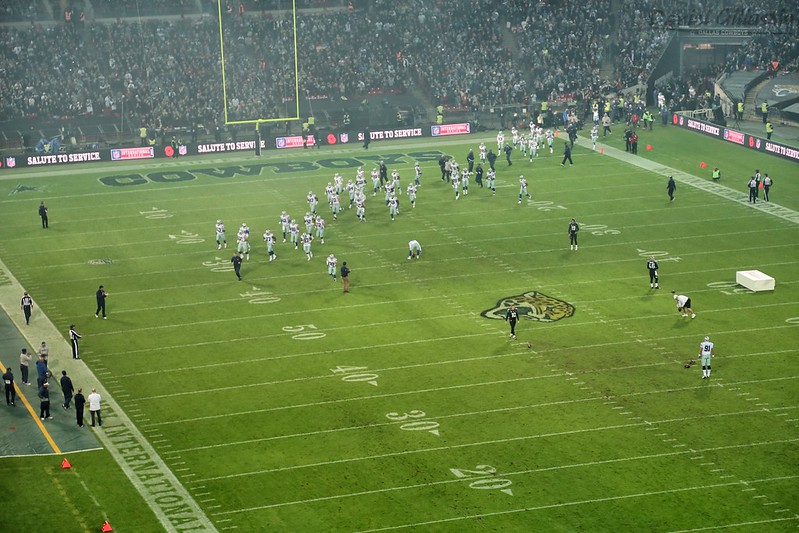 The game day experience at Wembley was great. It did seem that the majority of fans there were anti-Dallas Cowboys, though. The Jacksonville Jaguars had a decent showing but it seemed like there were more Cowboy haters there than Jaguar fans. Speaking of fans, I was glad to see that the entire stadium was packed; there didn’t appear to be many empty seats at all. The crowd was lively but not quite as rowdy or loud as I was used to seeing in college. Then again, I regularly attended one of the loudest stadiums around, Texas A&M’s Kyle Field, so that’s setting the bar pretty high to begin with.

Still, the crowd was into the game about as much as you’d expect from a diverse mix of passionate NFL fans. They even brought “the wave” to Wembley which was something I hadn’t seen in a long while. Also, one thing I’ve never seen at a stadium that they did was pull a giant poppy sheet over the crowd on the lower levels and have it pass over the crowd like a giant stingray hovering over the sea floor. 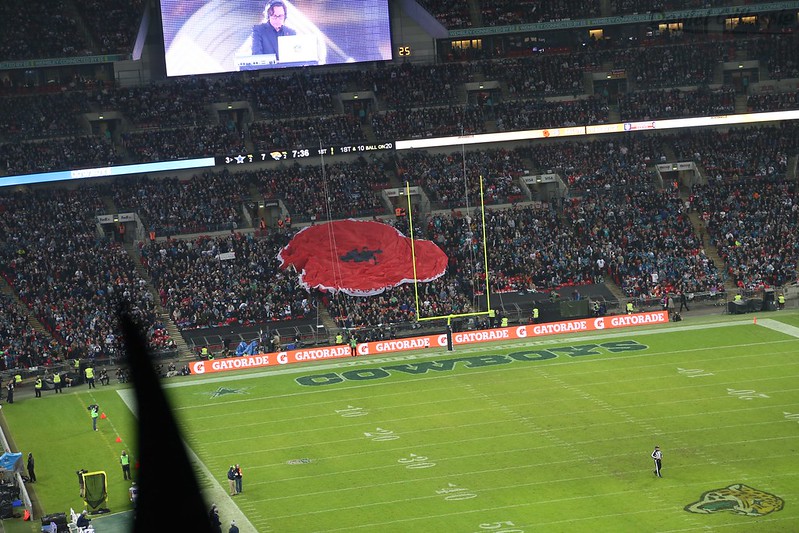 The game ended in a blow-out win by Dallas. One of the interesting things about the games in London is that they do have a designated “home” team. In this case, Jacksonville was the home team. That amounted to seeing the Jaguar’s logos at midfield and the sidelines, seeing their cheer leaders and drum line, and having their own PA guy. It was still a far cry from any kind of real home field advantage for Jacksonville but it was still interesting how they set try to preserve the home field feel in England. 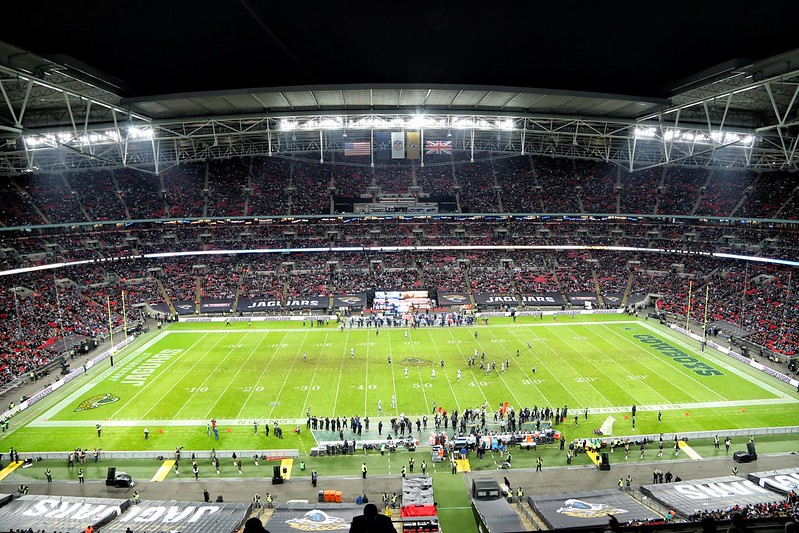 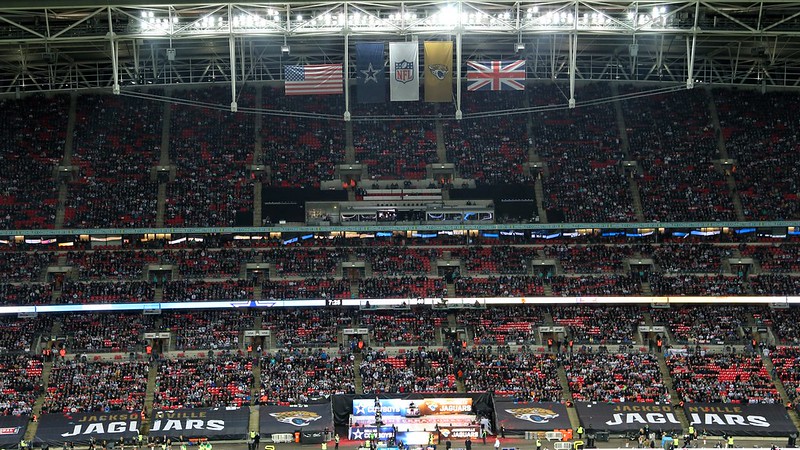 My only complaint with Wembley was their false promise that “80,000 poppies would be released from the top of the stadium at the end of the game.” This definitely didn’t happen and was the only reason why we stuck around till the every end of the game. I was disappointed that they didn’t at least tell us that they wouldn’t be doing it because we could have gotten a jump start on the train and gotten home about 2 hours earlier.

Leaving the stadium is one thing that get’s a little tough. The herd moving towards the Tube entrances was massive and I could only imagine how congested it got on the tube. The Rails going back to London were pretty packed as well. We actually got lucky and had the shortest line heading north from Wembley but even in that queue it still took us about 1 hour for a train to arrive and for us to board. 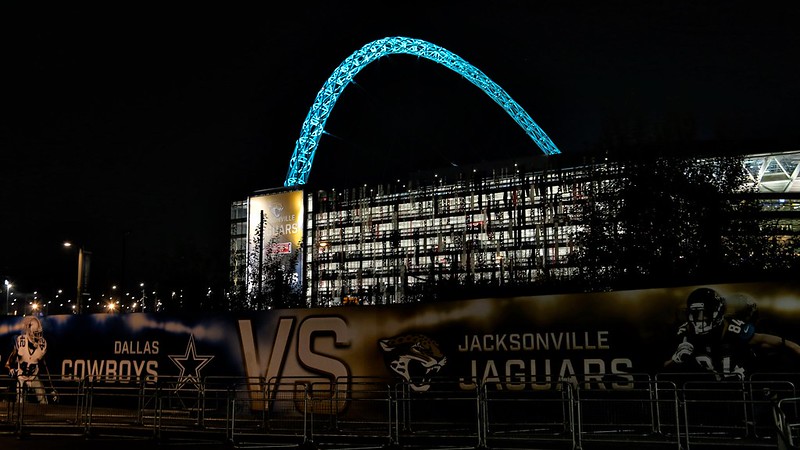 Overall, it was one of my best experiences I’ve had since I’ve been in London. It was great to get a taste of America while here and it will be very interesting to see whether or not the NFL ends up setting up a team for London to call their own.