If you’re like us and do a lot of short, three day trips you may not always want to bother with buying a pre-paid SIM card and mess around with taking out your own SIM card and risk ruining it or losing it. The problem is you may not have any kind of cell phone service or data when you go to certain countries, which can be a good thing sometimes but can be a real pain when you need to quickly pull up directions or find somewhere to eat. So if you’re looking for one of the best free offline map apps that doesn’t require data then consider Maps.Me. 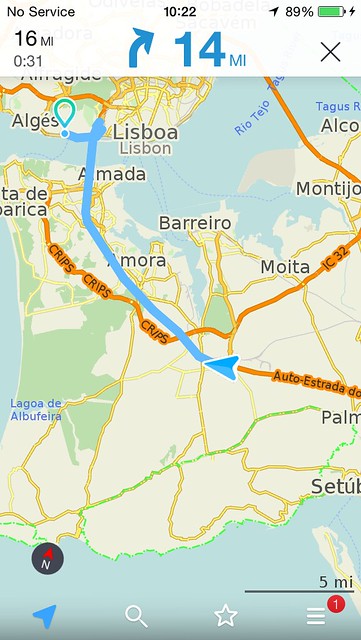 Some of you may have relied on Google Maps on your mobile devices even without service. It’s true that your GPS does work, but only to a certain extent. I’m pretty sure phones like iPhones use an “assisted GPS” meaning that without access to data, your maps are not going to be complete at all and often times will be impossible to navigate with. Just about every time I tried to rely on just Google or Apple Maps on my iPhone I had major issues. Often time only a single blue dot would show up amid a screen full of gridlines rendering the map completely useless. So while you can just try to get by with one of those apps, I highly recommend to not risk getting lost and going with an app like Maps.Me.

Maps.Me requires zero internet connection (it can even function in airplane mode). This applies whether you get the app from the Apple App Store Google Play Store or off Amazon. Speaking of purchasing the app, another great thing about this app is that it’s free!

The app has just about everything covered in terms of locations. As far as I know it has every major country covered and maybe even all or most of the smaller countries — it even has maps for small islands.

The maps are also exceptionally detailed. You can find just about everything: pharmacies, cafes, pubs, restaurants, public bathrooms, parking garages, etc. The streets are also marked for the direction of traffic flow, which proved to be a great asset, especially in places like Lisbon, Portugal where driving can quickly become a nightmare. 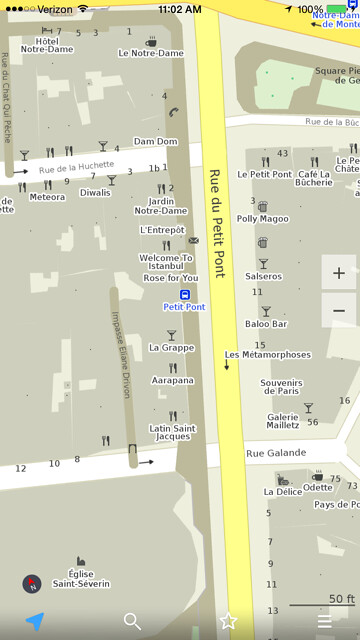 Maps.Me also has a helpful “auto direction” feature so that the maps orients itself with the direction that you’re heading, which is great for both walking and driving.

The maps are very easy to manipulate with touch zoom and two-finger touch turning of the maps. I was really impressed with the speed of the app as well. Compared to Google Maps, this app was making our life a lot easier as we approached exits and needed to receive directions promptly. Another handy option is that you can tap on a place and “star” the location to bookmark it for later.

The search feature is great as well. You can look up just about everything from food, hotels, and transport and even less common things like WiFi sites, ATMs, and different types of entertainment and sites. I will say that a few restaurants didn’t pop up for us while we were in the Algarve (Portugal); however, those same restaurants didn’t pop up on Google Maps so they may have just not been officially listed. Still, just about everything else we searched for came up without any issues so I was pretty impressed. 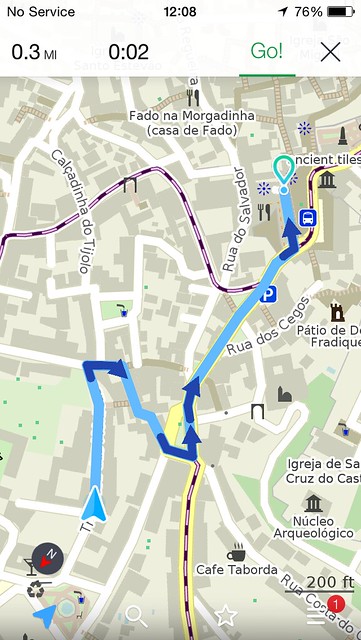 It’s pretty easy getting started on the map, too. You simply zoom in on a country and eventually a “download map” will appear. You can also search for the country in the list option. (For some big countries, like the USA, you actually download the states individually.) The basic maps will take up a decent portion of your memory but it can vary somewhat, especially for countries where you can download region-specific maps. For example, the map for just England UK is 379 MB to download, while the map for the Paris, France region is only 107MB.

In addition to downloading just the maps, you can download routing directions for the country, too. That will require more memory for your phone to store but I used the navigation routes in Portugal and I found the routes to be vastly superior to the crazy routes that Google Maps was sending us so the extra memory required was well worth it. Sometimes the routing options are only about 20 more MB but sometimes they almost double the size like England’s which goes from 379 MB to  566 MB. Now that I have a much bigger iPhone (64 GB) this isn’t so much of a worry for me but before I had the 16 GB and could only afford to download a couple of maps. Thus, I think the only drawback of this app is the space that it takes up, which will probably only be an issue if you have a phone with limited storage capacity. (I believe you can save maps to your SD card with other types of phones.)

I know that there are many other options for offline maps that are solid choices but I haven’t felt the need to try out any other apps because I’ve been so satisfied with this app to date. So look around and research other offline map apps if you must but you really can’t go wrong with this app!