Every once in a while, we find ourselves in a sticky situation. A situation where we’re not sure how we got there and would really like to get out. Driving in Lisbon, Portugal on a busy sunny weekend was one of those situations. If you are thinking about renting a car and driving through the streets of Lisbon then please consider the advice in this post.

First, let me just say that I didn’t do any of the driving — our car was manual and I’ve yet to teach myself how to work such a thing so my SO Brad handled the wheel while I was busy recording footage out the window with our GoPro. Brad’s a very efficient and experienced driver. In fact, he’s one of the best drivers I know. With that said, driving through Lisbon was still an overall “nightmarish” experience for both of us. 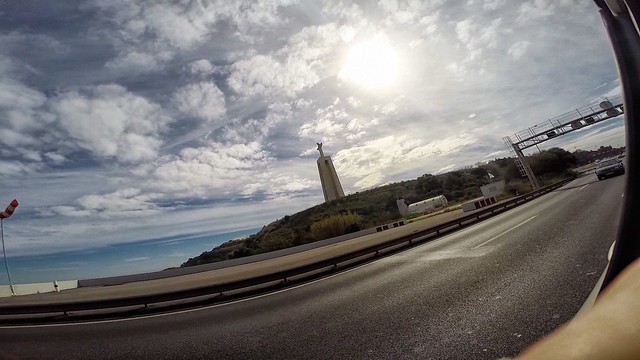 We first arrived in Lisbon from the south, over the 25 de Abril Bridge bridge — you know the beautiful bridge that looks exactly like the Golden Gate Bridge in San Francisco. It’s a hell of a way to make your entrance into Lisbon, with great views of the surrounding bay/river. Everything was pretty good up to that point. And really, things were still okay once we made it across the bridge. 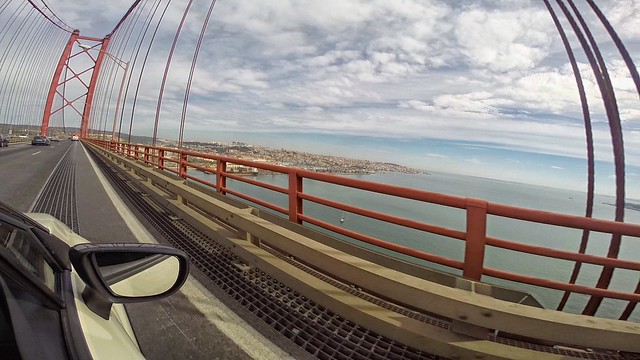 Our first destination was to find Pasteis de Belem, so we turned west right off from the bridge. This area in Lisbon was totally tolerable from a traffic standpoint. While I found that they did drive quite aggressively in Lisbon, there wasn’t a very high concentration of crazy drivers or pedestrians in the west area of the city. 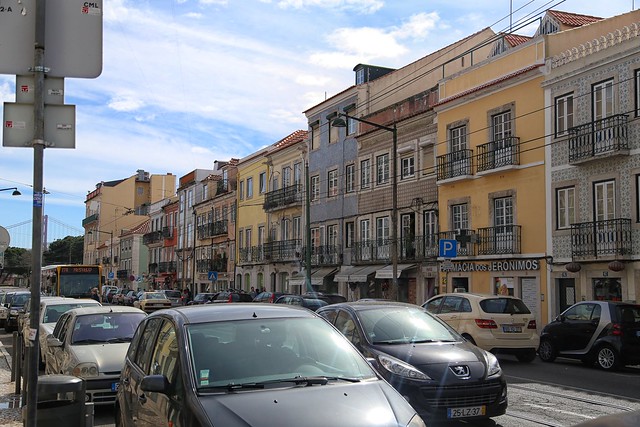 We even easily found open parking very near to Pasteis de Belem and were able to park our car and then walk about the area and admire some of the colorful architecture. It was still relatively early, about 10-11am, so the streets weren’t congested too bad, though the line at Pasteis de Belem was already waayyy out of the building. 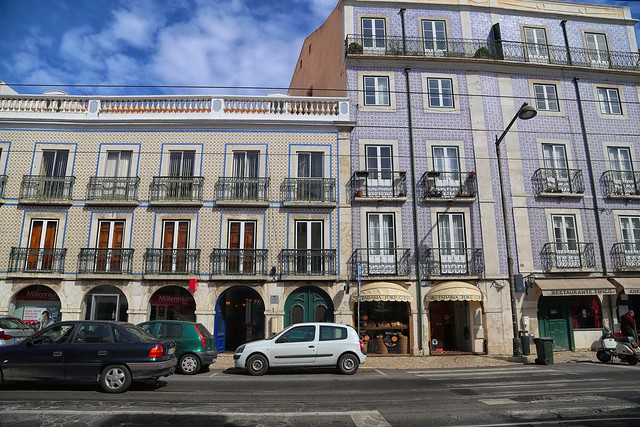 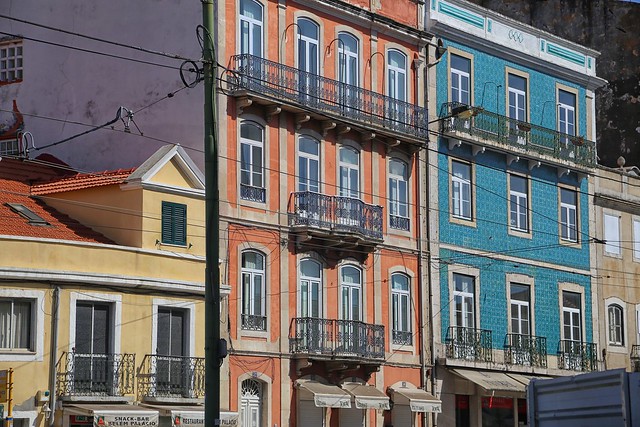 After we had a little breakfast, we decided to check out the really interesting part of Lisbon: Old Town Lisbon. This is where all of the amazing castles, viewpoints, and awesome hills are. Little did we know, things were about to get really hectic.

As we began to approach the hilly side of Lisbon, the lanes became narrower and we soon found ourselves navigating a labyrinth of tight corners, alleyways, busy pedestrian crossings, clamoring cable cars, and tuk-tuks. The drivers became much more aggressive in this part of town. We got cut off, yelled at, honked at, and received a bunch of crazy stares as we fought for survival. It was every man or woman for themselves. 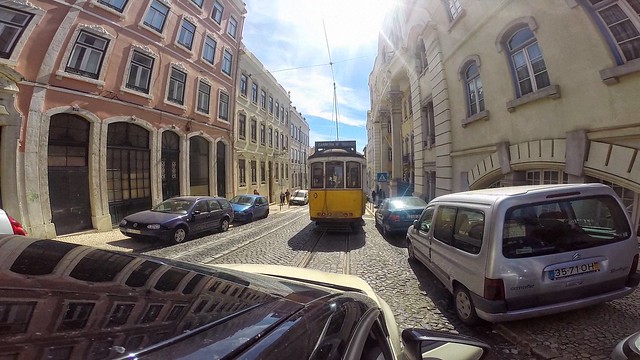 The thing was, this seemed like just another Saturday in Lisbon, not too much out of the ordinary. It was stressfull and pretty annoying but we still maintained our composure, at least for a while.

Things became a bit unravelled at one point when we got stuck behind a pile of cable cars that weren’t moving at all. The worst part: we were in the middle of a really busy intersection! Herds of pedestrians were weaving through the intersection, in front of us and in back so we couldn’t move. Cars were laying on their horns. Bells were ringing. People were shouting.

At this point, the honking and defensive gesturing had gone on long enough, so I jumped out of the car and actually started to direct traffic.  Looking like Chris Pratt out of Jurassic World, I stood out in the middle of the street and forced pedestrians to hold and signaled for a line (yes, an entire of line of bumper-to-bumper vehicles that were behind us) of cars  to back the f*** up and  let us get out!

(It’s really too bad I didn’t have the GoPro running for all this.)

The crazy thing is that the people actually listened to me. One by one, the cars slowly moved back. The pedestrians waited patiently. And once there was as little as an inch for us to break free, we darted down some tight roads not even trying to get the GPS to work and just hoped to find somewhere where we would decompress (and maybe chug a pitcher or two of sangria). The only problem was that we needed to stop to do so and so our quest to find parking in Lisbon began.

We drove, and drove, and drove, looking for parking and found nothing! The parking lots were all full. And not just full, but jam-packed to the point that if you entered into a lot it was pretty much the land-of-no-return and you weren’t going to be able to get out. The streets were lined with vehicles for what seemed like miles. And what made it worse is the whole time you’re looking for non-existent parking, you’re also trying to avoid collisions with cable cars and a bunch of drivers who are zipping through the streets like they’re trying avoiding the policia.

A parallel parking spot, on a steep incline, with only enough room to fit a slim stack of Euros between the cars.

However, we finally did find parking about a mile and a half further from where we were originally planning to park. Even this spot was a challenge. A parallel parking spot, on a steep incline, with only enough room to fit a slim stack of Euros between the cars. Luckily, we squeezed right in, half of our vehicle hanging up on the curb. The entire process had only lasted about an hour but it was the most stressful hour we’d experienced in Portugal by far.

Once we finally got out of our car we made sure to make the most of our time and resorted to walking everywhere so we didn’t have to go through that experience any longer. And while we weren’t able to catch a ride on a cable car, we did very much enjoy walking around the city — it’s definitely a great place to stroll around and with the hills and cable cars clamoring around, it reminded me of San Francisco.

So that was our driving experience in Lisbon…. I do want to say that we only spent one day driving in Lisbon so it could’ve been just a crazy day or we could’ve just gotten really unlucky and it may not always be so crazy. However, from other research that I’ve done, Lisbon just seems like a tough place to get around in a vehicle. With all that said here are a few pointers if you’re considering driving in Lisbon: 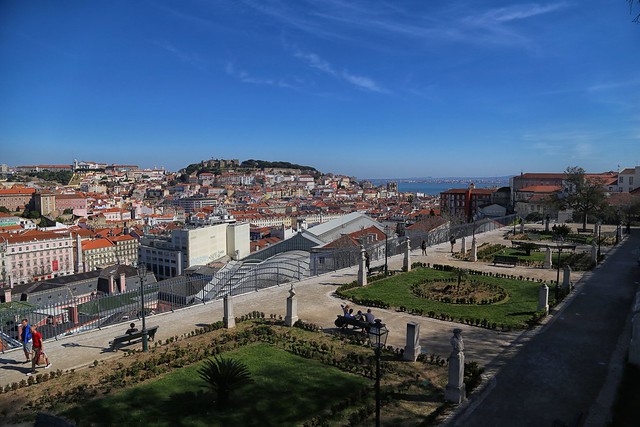 Driving in the Algarve was fine and even driving outside of Old Town Lisbon was okay. Therefore, I recommend that if you must drive in Lisbon, try to park away from Old Town and then make your way into Old Town via cab, bus, tram, or just resort to walking.

It’s very possible that given the beautiful conditions and the fact that it was a Saturday, we were just asking for crazy conditions in Lisbon for driving. I know plenty of other cities that also become nightmares for parking and such on weekends, so maybe if you can swing driving in the middle of the week, it won’t be so bad?

Only try this if you know you can handle it

Only attempt driving in Old Town if you’re comfortable. For some, it may not be as bad of an experience. There are some areas that aren’t heavily congested and are a lot of fun to ride through. And even amidst all the pandemonium, looking back it was still kind of fun so if you like really adventurous stuff you might actually enjoy it a bit. However, if you’re the type who really doesn’t deal well with stressful driving conditions, then Old Town Lisbon is not the place for you to drive because those brief moments of calmness are outweighed by the craziness.

Be aggressive. This is the only way you’re going to find parking and not have to waste a lot of time getting stuck because of inconsiderate drivers. If you’re from a part of the world where drivers regularly offer to give you room to pull out or to make your life a little easier, that’s likely not going to happen here.

Don’t rely too much on your navigation system

Don’t rely too much on your navigation system. Our navigation system, while rock-solid in the Algarve, was going mad due to the maze of streets we were trying to work through. It proved to pretty much be useless when we got to the really densely populated parts of Old Town. You’re better off relying on manual GPS tracking or even a paper map.

Take extra time to remember where you parked if you ended up finding a parking spot in some random side-alley among the maze of streets. It’s really easy to lose track of where you parked in those areas. And if you just really want to park in the one of the lots close to the famous lookout points located around the city then my suggestion is to make it to Old Town at like 8am and stake out your parking spot so that you can have it for the the day (assuming you can park there that long).

I hope I’m not making it sound like the Portuguese are A-holes because they were absolutely great people with an amazing culture. I think their driving, which was crazy to us, is simply “just the way they do things.” They’re not trying to be rude to you, so try not to take offense when you get cut off by car after car who feel no need to use their turn signal and just enjoy your time in Lisbon. After all, it’s one of the most beautiful cities in the world, even if driving there is a bit absurd.