Niagara Falls has to be hands down one of the most accessible, yet breathtaking natural wonders to photograph. It’s basically impossible to not come away with some great shots after your visit, but it’s even easier when you know how to go about your trip to the falls. Here are a few simple tips on photographing Niagara Falls.

The best view of the falls is going to depend on what you prefer as a photographer. If you love ariel shots and wide panoramics then one of the best places to head to is the Skylon Tower. From the viewing deck, which is over 500 feet tall, you’ll be able to shoot both falls at once with a very wide-angle lens and/or be able to set yourself up for some great panoramic shots. The viewing platform is caged so you’ll have to work around the cage-wire to get your shots, which can be a little difficult when working with a tripod but it is still doable. Below is a two-frame, HDR panoramic I stitched together.

My favorite view of the falls is on the plaza/walkway on the ground level by the falls. Standing right over the water gushing over the ledge is a bit dizzying but it’s a great way to wrap your head around the immensity of Niagara Falls. The best time to photograph this viewpoint is at sunrise. Just google image “Niagara Falls sunrise” for some inspirational shots. 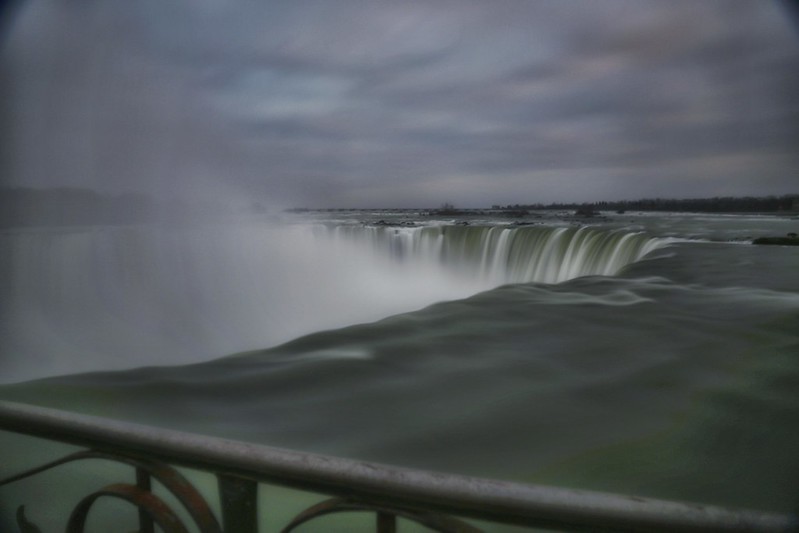 Unfortunately, the clouds, fog, and mist plumes were so dense when we visited that they completely blocked out the sun and there was no sunrise at all. It was a bit of a bummer but sunrise is definitely the time you want to be down at the falls to photograph. Sunset can be a pretty time, too. It’s just that you’re not going to get that same “sun burst” look viewing it from the Canadian side due to the viewpoint facing east. Below are some of the shots I got during the afternoon on my recent December visit to the falls. 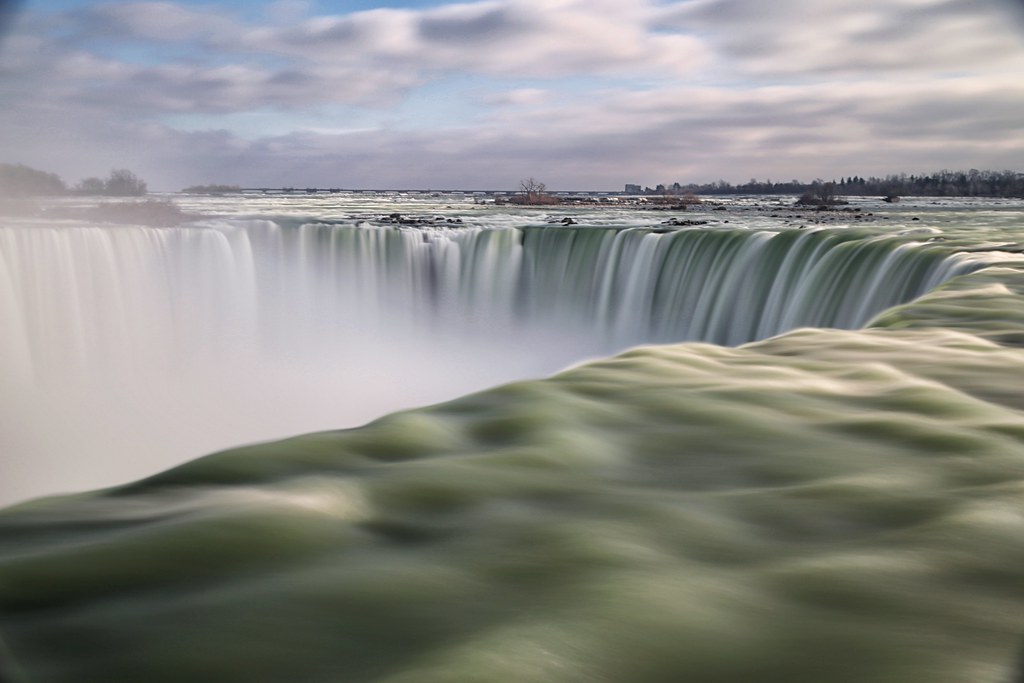 TIP: the hotels such as the Marriott Fallsview offer close proximity to this point so that you can reach it within 10-15 minutes, which is great if you’re not exactly a morning person and want to catch as much sleep as possible before waking up to catch the sunrise. The “Niagara Funicular” (elevator thingy) doesn’t open up until around 9 or 10 am so you’ll need to walk around to Murray St. to get access to the falls in the wee hours of the morning. Another great thing about staying in a hotel like the Marriott Fallsview if that you can check out the conditions before sunrise to know if it will be worth it to head down to the falls. From the 16th floor, it was obvious both mornings that the sunrise just wasn’t going to happen so I never had to waste my time going all the way down there. 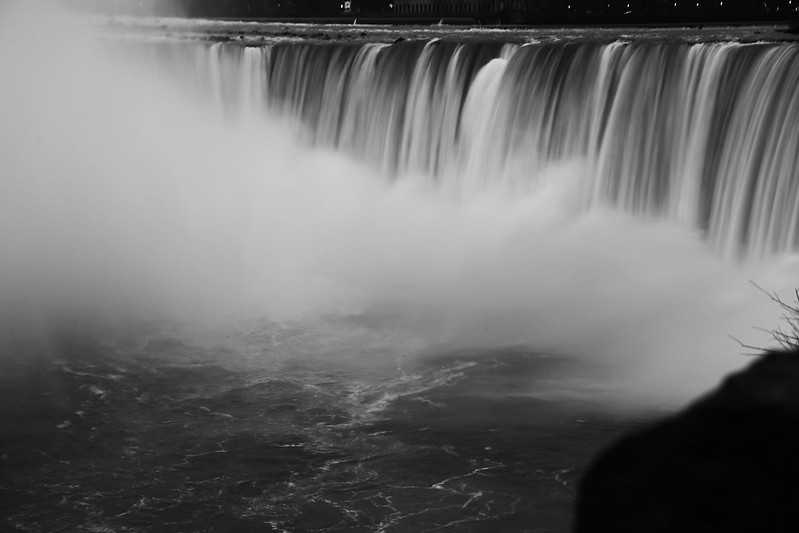 One of the coolest ways to photograph the falls is by utilizing the slow-shutter effect, which I did in almost all of my photos. If you’re new to photography, using the the slow-shutter effect is a way to achieve those silky smooth appearances in the water like as seen above. I used a B+W neutral density 10 f-stop filter which blocked out a crazy amount of light, allowing me to capture my images with 25-30 second exposures. It was my first time using such a filter and I realized that stacking the filter with other filters led to vignetting (dark shadows on the corners), so next time I won’t be stacking those. But I highly recommend you trying out a neutral density filter if you have a DSLR and want to capture some spectacular shots. 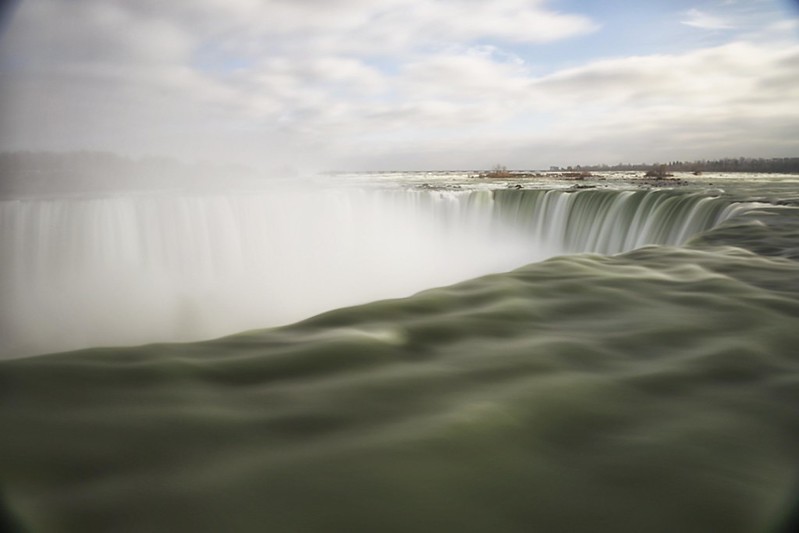 As you continue to head north from the falls, you get better vantage points to capture the entire horseshoe of Horseshoe Falls. Take a look down at the misty river below and you’ll notice flocks of birds cutting through misty clouds like a scene out of Jurassic Park. It’s really mesmerizing. I imagined the walkway along the river to be shrouded in mist and moisture but it really wasn’t. Depending on the wind conditions, you may not even get hit with any of the mist and if you do it might be marginal. However, I could definitely see how on a windy day it could be an entirely different story. The area just a little upstream for the falls is a great place to attempt a panoramic to capture both falls from the ground level. Below is the one I captured, along with a double rainbow, which usually appears in the afternoon with a little help from the sun. 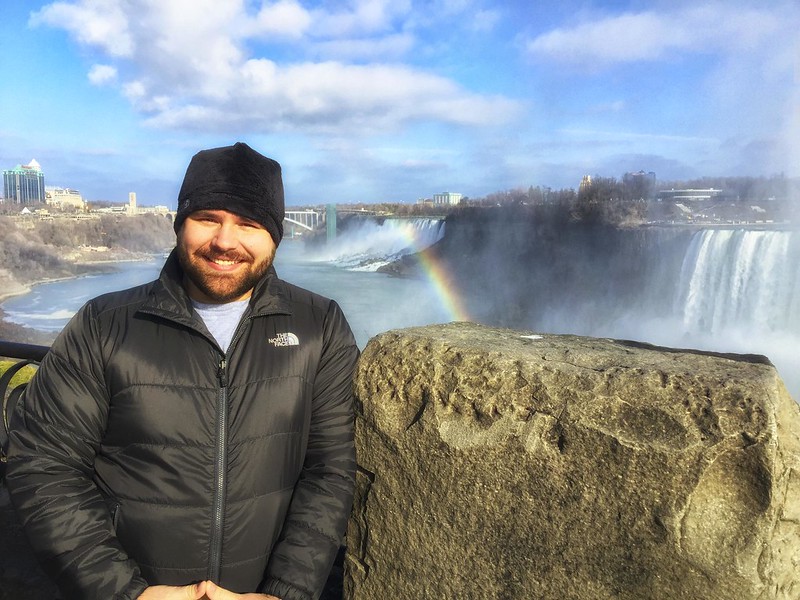 There’s a bit of foreground to experiment with when shooting the falls and utilizing it helps to distinguish your shots from the thousands of photos out there of Niagara Falls. It was a little tempting to climb over the railing bordering the walkway to get some shots but I had no idea how tightly security was enforced and the last thing I wanted to do was to get banned from the area… or you know, die. You may have to do some editing later to get some of the trash debris out of your photo because the areas below the railing were pretty littered. 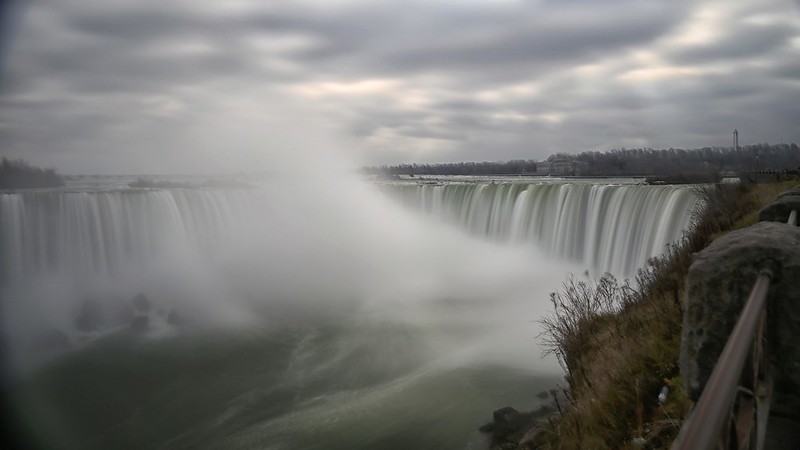 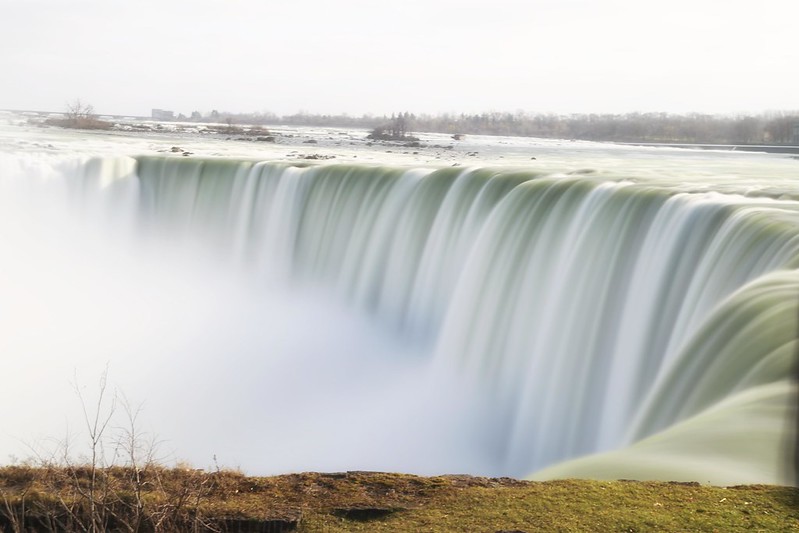 Finding an open area along the river walkway to set up for photographs with my tripod was easy. However, I know that visiting in the summer would be a completely different story and would likely be somewhat miserable. So if you’re visiting during the peak season, I’d definitely do my best to get there early before the crowds begin swarming. Finally, once you walk a good 10-15 minutes upstream you’ll be around the Rainbow Bridge area, where you’ll have a view of the American Falls. The American Falls are not as impressive as the Horseshoe Falls, mostly because they just aren’t as wide and don’t appear as tall due to the massive assemblage of rocks built up at its base. However, they’re still worth checking out and photographing. 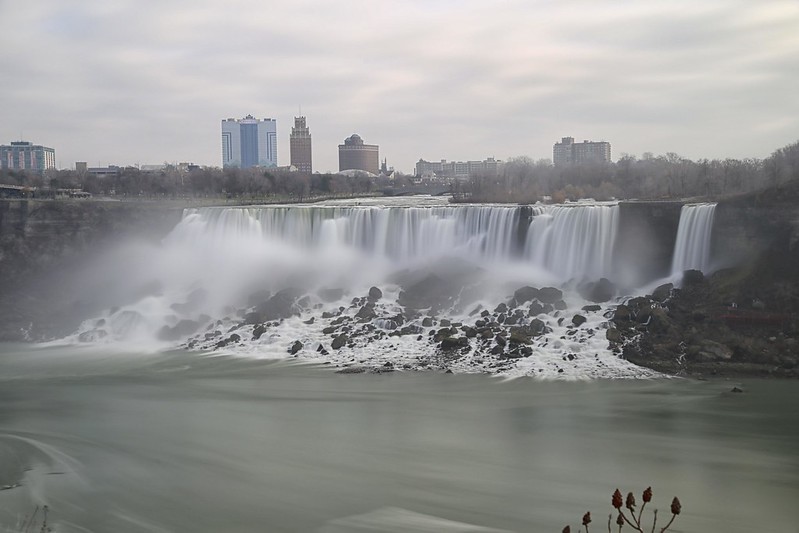 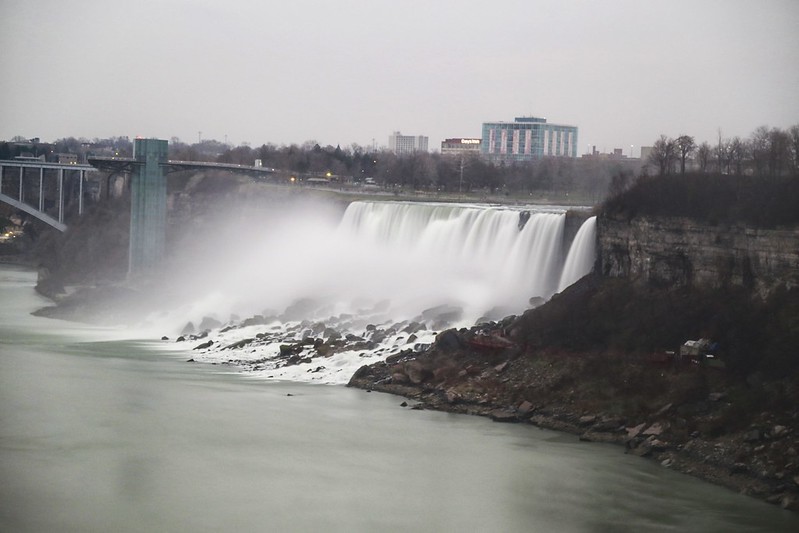 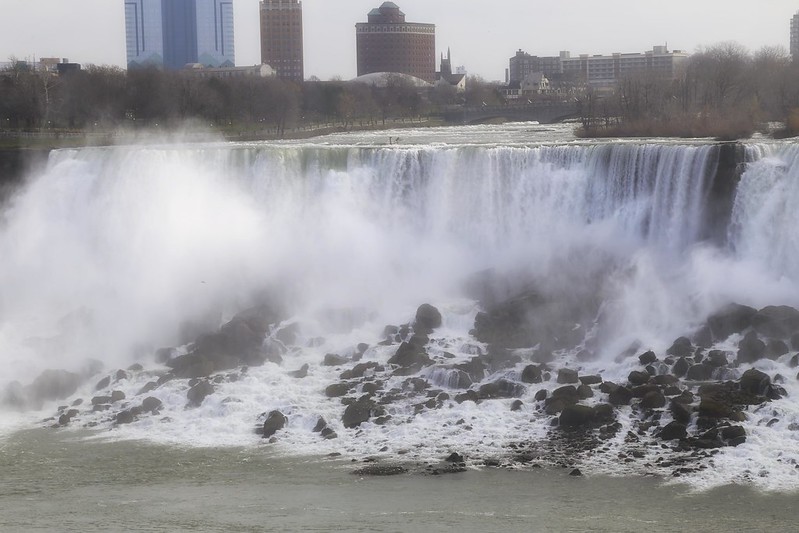 Which brings me to my one regret about my recent Niagara Falls visit. I really wish we would’ve gone over to the American side to check out Goat Island and get up close with the falls. It’s true that the better side to visit is the Canadian side but I think that viewing the falls from the viewing decks on Goat Island would’ve been a cool experience. Of course, you’ll have to deal with customs and all the time it takes to get through that but looking back I think it would’ve been worth it. Once you arrive near Rainbow Bridge you can just walk uphill a little bit and you’ll be in the middle of Clifton Hill with tons of tourist things to do like Ripley’s Museum, a haunted house, restaurants like Planet Hollywood, etc. 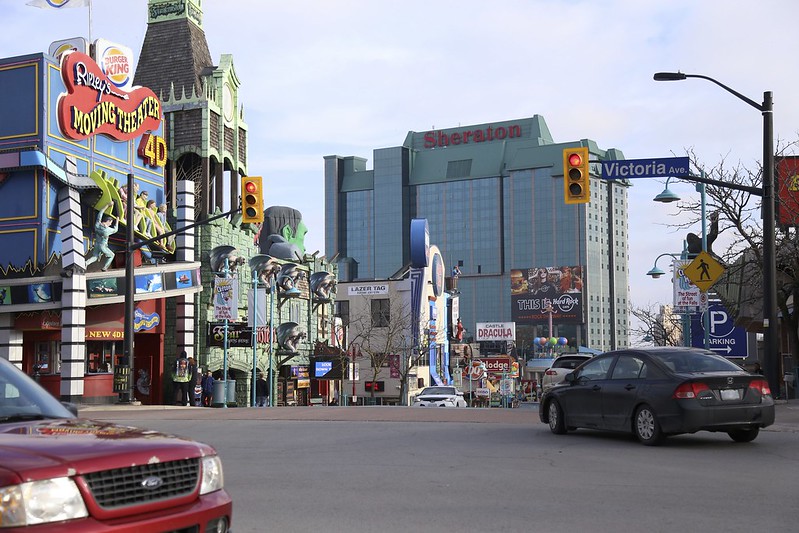 If you spend a couple of hours exploring Clifton Hill, you can ten proceed to head back the same way you came and then photograph all the areas again but with slightly different lighting. My optimal route for spending a day on the Canadian side in the month of December (when sunlight is limited) would be to follow the above route starting in the morning.

I’d probably venture out during sunrise if it looked like the lighting would be good and then go back to the hotel, relax, eat breakfast, etc. and then come back out around 9 am or so and start the route. Once you get your late morning shots head to Clifton Hill and spend a couple of hours there eating lunch and checking out some of the attractions if those interest you. Then you head up to a place like the Skylon Tower for dinner or to photograph the falls from above as the sun begins to set. The lighting really softens up the falls and can look really interesting with light streaks hitting the escarpment cliffs. In the summer, you’d of course have much more time to explore the area in one day and could probably get over to the US side from Canada with enough time to come back and still catch sunset from the Canadian side. 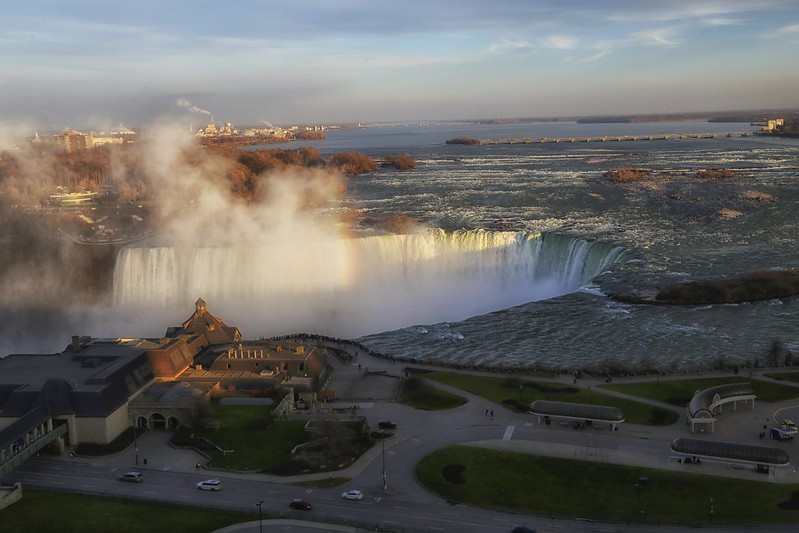 Photographing Niagara falls is a blast and as I mentioned, it’s virtually impossible to not come away with some great shots. But definitely try to get some sunrise photos and if you can learn it, try to shoot some slow-shutter photographs to get some of those breathtaking silky-smooth water shots.