Getting to the Caribbean with great deals is actually very easy because you have plenty of options with tons of different routing opportunities. If you plan in advance and are a bit flexible with routing, you can really stretch your miles with some of these programs. Here’s a breakdown of 6 of the best ways to use miles and points to to get to the Caribbean.

Southwest now has an emerging presence all over the Caribbean, including Mexico. Their award rates are based on the ticket fare so there’s no standard award chart for their redemptions. However, some of their routes are exceptionally cheap and if you’ve been fortunate enough to pick up the Companion Pass, you can hop all around the Caribbean for extremely cheap.

For example, below is a redemption from HOU to CUN for 4,248 points for a one way award. For a round trip, that’s about 9,000 points. If you’ve got the Southwest Companion Pass (which I highly recommend), then that means you’ve got two round trip tickets for merely 9,000 points! 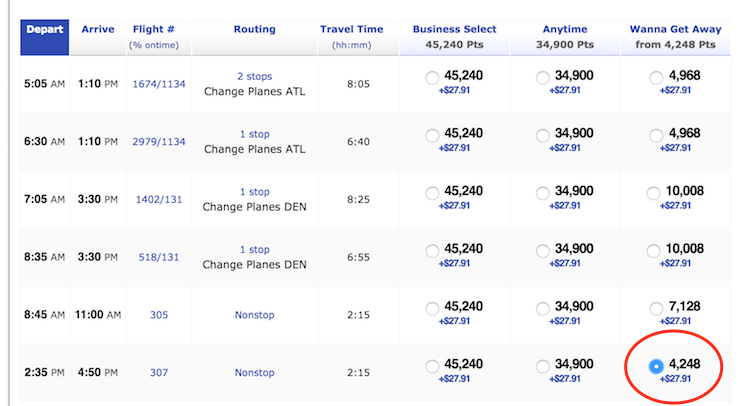 Here are some other examples of great redemptions from Southwest:

Use the Southwest Route Map to search where you’d like to go and you’ll see there are plenty of options for getting to the Caribbean. If you schedule your trip in advance and are a bit flexible with the routing, you shouldn’t have a problem finding cheap routes like the ones above.

All three of these cards offer 50,000 sign-up bonuses at different times and can make obtaining the Southwest Companion Pass extremely doable.

Southwest is also a transfer partner of Chase Ultimate Rewards.

Using Avios to get to the Caribbean is one of the best uses of Avios, in my opinion. Avios is distance-based meaning that your mileage requirements will depend on how far you’re going to travel. For getting around the Caribbean with Avios, you’ll likely be making bookings with One World partner American Airlines.

Thus, I suggest that you follow these steps to find the flight for you:

Once you start playing around with the map and looking at the British Airways Award Chart, you’ll be able to know exactly what the mileage requirements will be for different trips. Anything under 3,000 miles be 25,000 Avios for a round trip and will likely be a good redemption. Once you go over 3,000 miles the redemptions jump up to 40,000 round trip and you’d probably be able to find better deals with other programs.

I’ve included some examples of redemptions below.

If you depart from Miami, you can hit many of the Caribbean destinations for only 15,000 round trip. Going from Miami to Aruba (1,133 miles) is just under the 1,150 mile threshold for the next Avios zone, so it’s a great sweet-spot to hit.

Here’s a look at what the American Airlines route finder will show you when looking for direct flights out MIA — it can look a bit messy, but it’s an easy way to check if non-stops go to your desired destination.

The flight to to PUJ from ORD is just 19 miles under 2,000, although straight shots appear to be somewhat limited.

Some of these redemptions can be pretty valuable. For example, for the DFW to CZM flight you’d spend $27.74 taxes, fees and carrier charges. Factoring in those fees to the lowest cash rate for this flight with American Airlines (seen below), and that 15,000 Avios redemption is worth 4.2 cents per point, which is very good.

You can earn British Airways Avios in the following ways:

Off-peak SAAver Awards will only cost you 25,000 miles to get to the Caribbean. It’s not always easy to find these off-peak awards, however, so realistically you might be looking at booking the standard SAAver award of 30,000.

Many of the redemptions aren’t as lucrative as the Avios, however. For example, if you booked the same DFW to CZM flight with 25,000 American Airline miles and paid the fees, you’d be spending 10,000 more miles and redeeming at 2.5 cents per point, almost 2 cents less per point than with Avios. That’s still not horrible, it’s just not great when you know you could book the same route for cheaper with Avios. However, if you don’t have any spare Avios, American Airlines is still a solid choice to get to the Caribbean. Flying Blue is a solid option for getting to the Caribbean, especially if you leave near a Delta hub.  Take a look at the booking all the way from Seattle to San Juan below that came out to only 30,000 miles and about $40 USD flying via Delta. That route would cost about $566 in cash flying Delta and so this redemption comes out to 1.7 cents per point, which again, it not bad at all.

The great thing about Flying Blue is that it’s now a partner of the four major rewards programs:

Thus, it shouldn’t be very difficult for you to put together enough points to cover a trip to the Caribbean considering how many options you have. And don’t forget, Flying Blue allows you to add one stopover. You’ll have to book it over the phone but it’s a great way to see more of the Caribbean!

Also, if you’re flying to the following destinations, the 25,000 redemption rate applies for Flying Blue making it an even better deal: 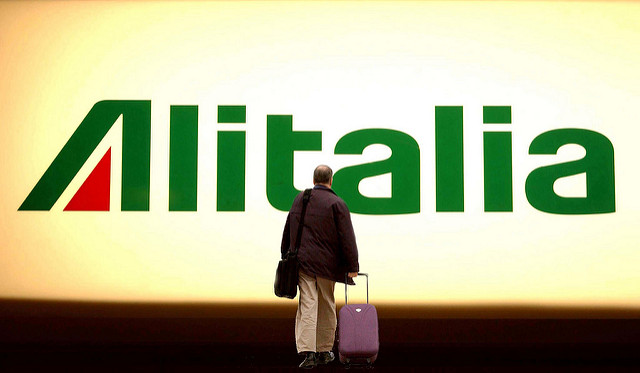 The Italian airline Alitalia, a member of the SkyTeam alliance, requires only 30,000 miles for SkyTeam redemptions from North America to the Caribbean (as well as Mexico, Central America and Hawaii). Alitalia is a transfer partner of both American Express Membership Rewards and SPG, so it’s pretty easy to build up a balance of their miles.

The only issue is that Alitalia can be pretty difficult to deal with. Their website can be confusing, you’ve got to call in to book awards (which can be a process), and if something goes wrong while you’re trying to book your flights, it might be a pain to trying to get it to work out. Thus, while Alitalia offers some nice redemptions at 30,000, if I were trying to book a SkyTeam award to the Caribbean, I’d just go with Flying Blue.

Alitalia is a transfer member of SPG and American Express.

LAN is another distance-based award system similar to Avios. They are also a member of the One World Alliance so you can use them to book flights with American Airlines. Their partner award chart is not as generous as the Avios chart is for the majority of distances you’d use for destinations in the Caribbean, except for very short flights, such as those under 500 kms like the one above.

So for example, let’s say you wanted to redeem an American Airlines flight going from ORD to MBJ.

This would require 28,000 LATAM kms versus the 20,000 Avios required. Avios would look like the better route here but if you are transferring from SPG, it’s actually cheaper to go with LAN. That’s because you’d only have to transfer 18,666 SPG points to reach 28,000 LATAM kms with the 1:1.5 ratio.* That would come out to about 2.1 cents per point which isn’t bad (but I know a lot of people may not be interested in using their SPG for such a redemption).

(*I’d actually only use SPG transfers for transfers of 20,000 or more to get the 5,000 point bonus but the point is just to show that using SPG points to LATAM can be a cheaper way to redeem with the 50% bonus transfer ratio than Avios.)

Thus, if you are looking to book American Airline routes to the Caribbean and are interested in transferring your SPG points to get there, you should consider LATAM.

LATAM is a transfer member of SPG.

I feel obliged to mention that many (if not all) of the airports in the Caribbean impose fees that often times seem disproportionate to the value of the redemption. There’s nothing you really can do about these except pay them. Some of them are included in the booking process so you pay them upfront with your ticket price, but others are requested in the airport.

It’s really important to research beforehand what kind of fees you might be up against and I recommend always having the local currency on hand to cover the fees, as sometimes the fees can process as a cash advance if you use a credit card. Here’s an article that goes into detail on the fees. It was published in December 2014 so some figures might have changed by now, but it should give you an idea as to what to expect with the fees.