There’s simply no better way to take in the renowned skyline of Chicago than to be swooping over and around its many super-tall skyscrapers in a helicopter. Sure, there’s the Willis Tower Sky Deck and the John Hancock Center Tilt 360 that offer unique experiences for viewing the city but none of those can compare to the thrill of exploring an urban landscape like Chicago from the sky.

The Chicago Helicopter Experience is a first-class operation that will leave you with unforgettable memories (and tons of stunning photos) of your visit to Chicago. The staff, pilots, and everyone else involved will do everything to ensure that your’e able to comfortably enjoy a scenic (and exciting) flight around some of the most prolific skyscrapers in the world. Here’s a review of a recent tour Brad and I did with the Chicago Helicopter Experience (CHE).

We arrived to the facility about 30 minutes prior to our take-off. Right now, I believe CHE is planning some massive renovations for a new facility so you might not be too impressed with the exterior of the facility. But don’t let that fool you, the experience of actually flying with CHE will be nothing short of excellent.

From the moment we walked in, I got a an immediate sense of the of the laid-back vibe at CHE. Inside, we found a large open area with bar stools, comfy seating, tables with various games to occupy your mind like Jenga, Connect 4, etc., indoor corn hole (bags), and even a flight simulator to play around on. For the slightly anxious passenger, these are perfect distractions to put your mind at ease. For everyone else, it’s just a great way to pass the short time you’ll be waiting for your flight.

As you wait to board, you’ll see helicopters take off and land every 20 minutes or so. This was my first time inside of a chopper, so I was very intrigued just watching these big red machines come in for landings, hover around for a bit, and literally ride off into the sunset. It was also reassuring to see everyone hopping out of the helicopters after their tours with smiles on their faces and it just added to the excitement of getting up in the air as our time for departure grew nearer.

After a short wait, we were told they were ready for us (others were called by their “flight number” printed on their boarding pass). We were taken to a locker room where we stored all of our belongings that we were not taking on the flight and used a custom combination to lock them safely away. (We brought my Canon 6D and GoPro along with us for the ride.)

From that point, we went through a metal detector and then proceeded to the prep room, where we were placed in a violet-lit room that contained the same seat arrangement that we’d be riding in.

I’ll be honest, I got a bit nervous when I first noticed the seat belt was pretty much the same type you’d find in an automobile, just with a slightly different clasp. I reasoned that since I’d be up in a helicopter a couple of thousand feet high, with the doors off, I’d need some form of extra harnessing or something. Turns out, I’d be just fine and once we got in the air, I wasn’t even thinking about it.

Once we were seated and strapped into the seats in the prep room, we watched a short, roughly 5 minute safety video. It goes over a lot of common sense stuff but you should make sure you pay attention to the parts regarding getting into and out of the helicopter. You don’t want to be standing in the wrong place beside a helicopter and you don’t want to look like a moron trying to take selfies while putting yourself at risk.

After the video, we stepped out into the hallway and were led outside. It was time to board! We did a photography tour so before we got in, the crew removed the side doors so we would have optimal views for photos. Riding with the doors off added a whole new thrill to the ride, so if you can swing it, I’d definitely consider booking a doors-off tour as well.

The crew confirmed our tour and then ushered us to the front of the helicopter for our keepsake photo. As soon as they snapped our photo, we hopped into our seats, snapped on our seat belts, put on our headsets, and were ready to go.

One great thing about a private photography tour is that you can customize your options and focus on the parts of the city that you want to see. For example, we’d just spent the afternoon at Wrigley Field, and so rather than spend a chunk of our time hovering on the north side of Chicago, we decided to just loop around the downtown area multiple times as the lighting changed.

I’d never ridden in a helicopter before so I didn’t know what to expect at all when taking off but to my surprise it was a graceful experience.

As we began slowly floating above the CHE facility and gliding over the river, I felt the same rush of giddiness that instantly hit me the first time I went SCUBA diving — a euphoric reminder that I’d just discovered a new addiction. In this case, it was flying on a chopper with the doors off!

As we crossed over a wide interstate, wide spans of green fields came into our line of sight. Beyond those, the imposing Chicago skyline rose into view. 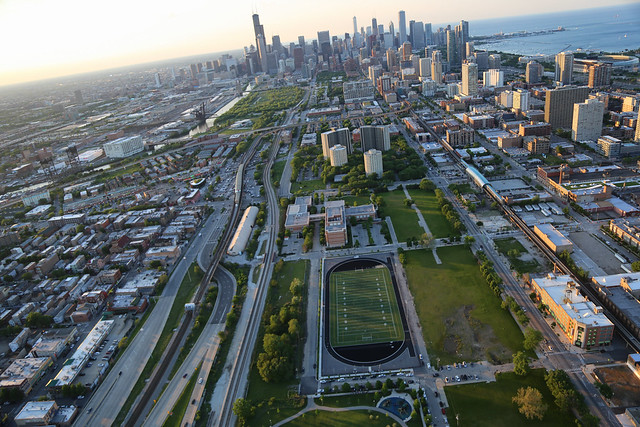 Our pilot, speaking through our headphones, told us that we’d be swinging over Lake Michigan to take in the views of the waterfront and then looping around the skyline multiple times. Before flying out over the lake, we got a unique glimpse of “The Bean” from above, with the rest of of Millennium Park surrounding.

Once over the lake, we descended to a lower elevation to catch a closer view of Navy Pier, where just beside it, large streaks from the golden sunset happening above us reflected on the water.

From there, we ascended back over the skyline where we caught striking views of the Willis Tower, Aon Center, and Trump Tower. I’d already been quite impressed with the Chicago skyline from the time we rode in from the airport but seeing the skyline from hundreds of feet in the air added more immensity to the skyline and gave me better appreciation for the high concentration of skyscrapers that Chicago is home to. 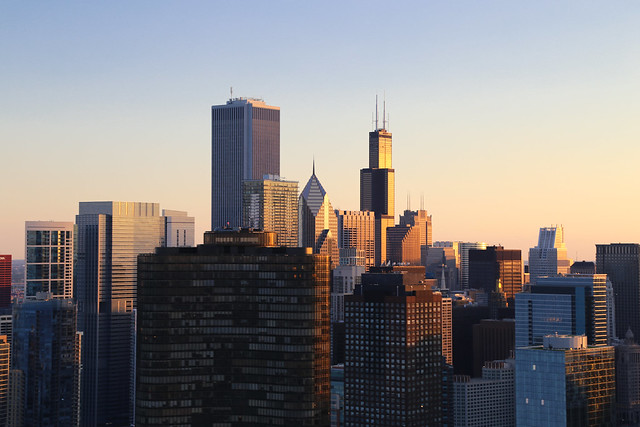 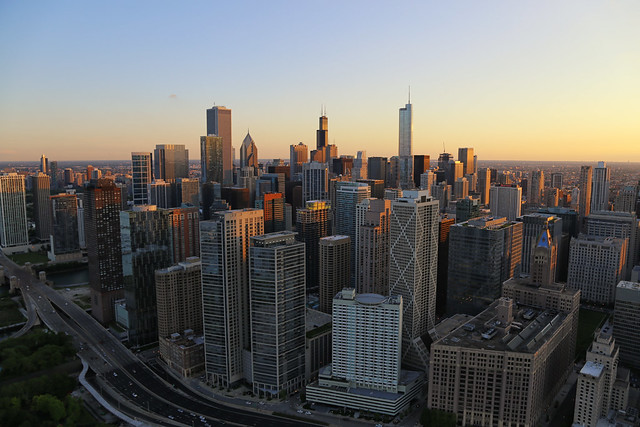 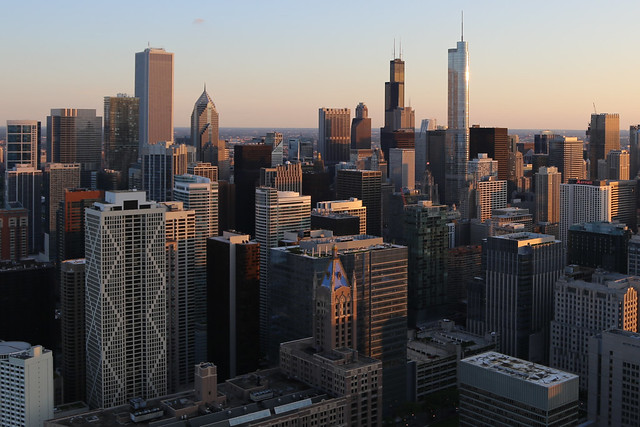 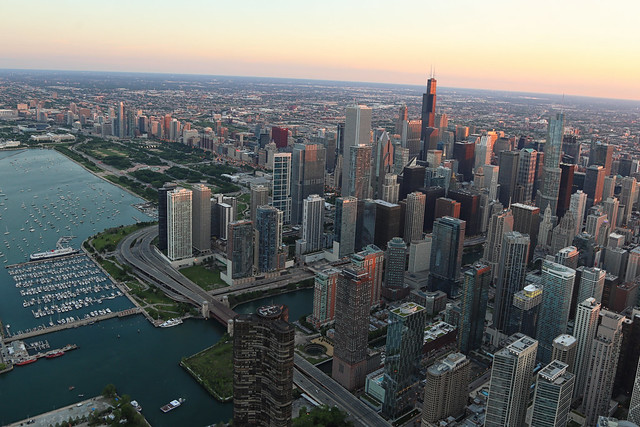 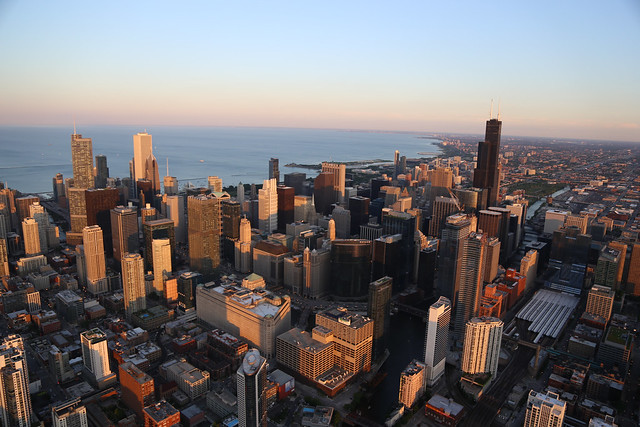 The lighting was beautiful to look at and admire, but at times almost impossible to deal with from a photography standpoint. If I could’ve gone back in time, I probably would’ve opted for a midday tour or a ride about an hour after sunset. If you’re just wanting to soak in some great views and take some pics from your phone to remember your trip, sunset tours are great — but if you’re trying to capture detailed shots of the buildings, the ever-changing lighting at sunset (especially with very few clouds present) can present a number of challenges that could otherwise be avoided.

After our first loop around downtown our pilot asked us what we’d prefer and offered his own ideas on routing options. We decided to mix-up our route to ensure that we’d see downtown from all different angles. This took us right over the Chicago River and we got great aerial shots of the riverwalk, lined with high rises, such as Trump Tower.

One of the coolest moments of the tour came when we approached the Willis Tower. As we circled around the tower, we were eye level with the dozens of tourists in the Sky Walk who were looking out at us as we photographed them. I’d thought about venturing up to the Sky Walk before but now that I was about 1,300 feet up in the air, roaming over the city, I was content to experience the Sky Walk from the outside.

After waiving back at the tourists behind the glass walls in the Willis Tower, we caught one of my favorite views of the entire tour. All four of the tallest Chicago skyscrapers stood in view, with the Willis Tower positioned prominently in front, and the other big three towering in the background. 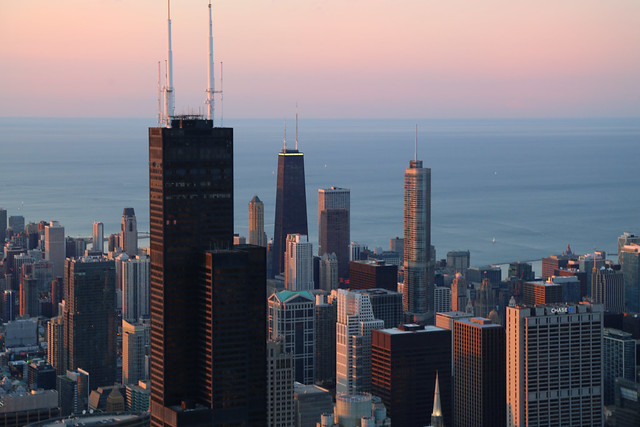 Later, once we pushed northward, we got another view of the big four but this time reversed with the John Hancock Center jutting up in the foreground from near the waterfront of Lake Shore Drive. 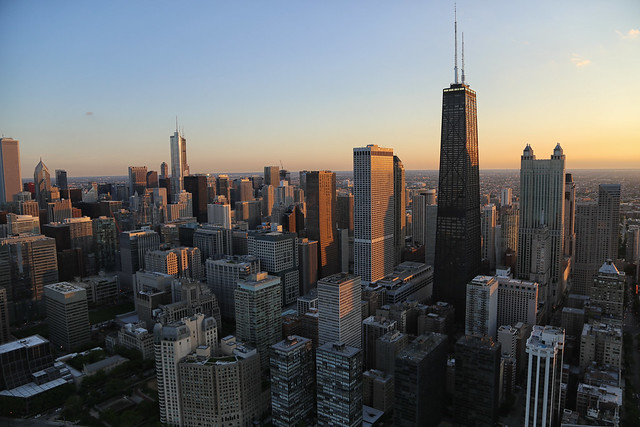 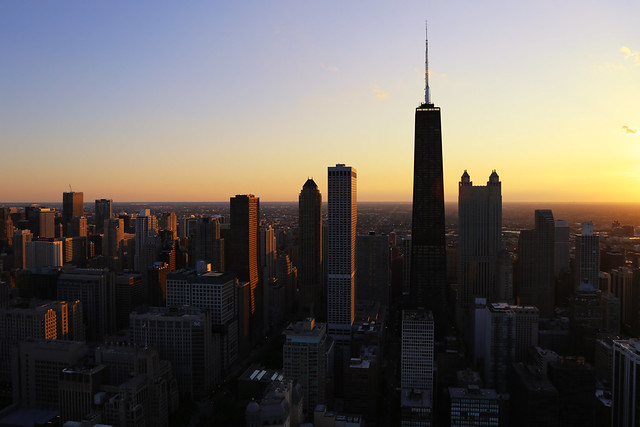 Finally, with the tour coming to a conclusion, we made our way back towards Navy Pier over Lake Michigan and noticed that the sun had dropped a few more degrees over the horizon and was now casting a brilliant purple over the city. 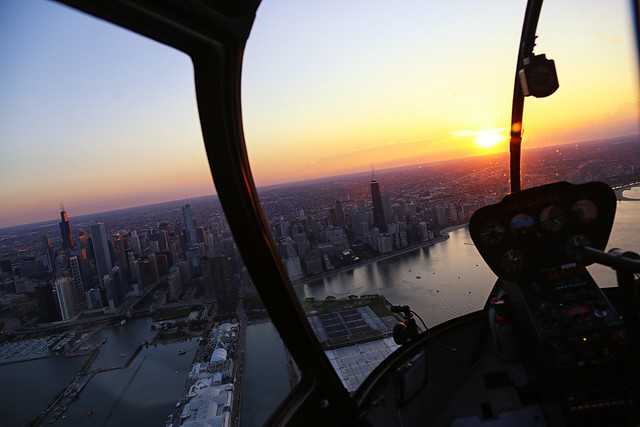 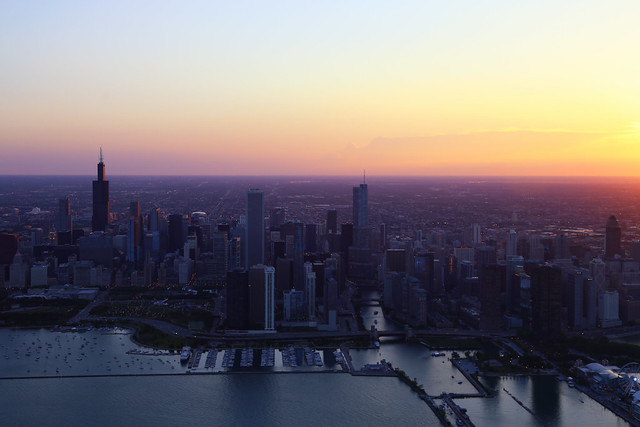 We took in the view for a little bit and then made our way back. Once we touched down, the staff ushered us back inside where we were given sharpie markers to leave our mark along with hundreds of other previous riders. After signing the wall, we checked out, purchased our commemorative framed photo, and then we were off the head back into downtown Chicago, only this time it would be via automobile.

This tour was definitely the highlight of our trip to Chicago. From the moment that we first contacted Chicago Helicopter Experience over the phone to book the tour, everything was taken care of smoothly and effeciently. They always promptly responded to my inquiries and gave me assurance regarding any of my concerns. The operations on the day of the flight were just as smooth — CHE does a great job of balancing professionalism with its laid back atmosphere so you feel at ease but not too at ease about getting in a helicopter.

I think a helicopter ride is the ideal way to experience Chicago and its world renown architecture — no other viewing experience can compare. If you’re looking for a legit helicopter tour then definitely consider booking with CHE, you will not be disappointed! Tours start at $148.