The hotel is located directly on the beach right in front of arguably one of the best snorkeling locations in the world. From the hotel, you are just a a few seconds walk from dipping into the clear Caribbean waters of the West Bay and that to me is the main draw of this hotel. Read about my snorkeling adventure in the West Bay here, and hopefully that will inspire you to get out and check out this reef!

Even if you’re not planning on swimming or exploring the reef (which you have to do), it’s the perfect place to take a walk on the beach and as you get further from the hotel, you’ll come across a number of restaurants and bars. The water taxis are just a few minutes up the beach and you won’t be able to miss them. They’ll take you to the West End for $3 per person but will require there to be at least 3 people in the boat. (If you’re okay with paying extra, they’ll take you with just two people.)

It’s about a 5 minute walk to the nearby “mini mall” where you can find a mini-supermarket, ATM, and a number of restaurants. The walk does involve an incline coming from the hotel, so be prepared for a little bit of a workout but nothing too strenuous.

The West Bay doesn’t quite have the assortment of restaurants that the West End has but there are still several to choose from. We really enjoyed Celeste’s Island Cuisine, where you can dine with wild parrots! Even though the parrots weren’t out (off-hours), we ate some fantastic baleada — a Honduran dish consisting of a fresh flour tortilla full of meat, cheese, and a number of other flavorings.

Getting to West Bay from the Airport

The hotel offers complimentary shuttle runs from the airport and the drivers will be standing in the airport once you clear immigration and customs holding a sign for the Grand Roatan Caribbean Resort.

The ride will take about 30 minutes but it’s a nice and scenic ride. You’ll spend some time riding along the coast and up and down some winding roads over hillsides. On our way to the hotel, I spotted the largest lizard I’ve ever seen (but sadly wasn’t able to get a photograph of it).

If you choose to take a taxi, it will cost you $30 USD. The taxis will be lined up outside and will have numbers painted on the sides of the vehicle so that you can identify them.

Aside from the views/location, the main feature of this hotel is definitely the pool area. It’s a large infinity pool with a pool-side bar area, volleyball net, and plenty of seating and lounge chairs surrounding its perimeter.

As much as I admired the pool, I simply couldn’t justify spending time in chlorinated waters when there’s such an amazing reef to explore just yards away. But still, it was nice having such a pretty pool and perhaps if we were staying for longer we might have taken a dip. 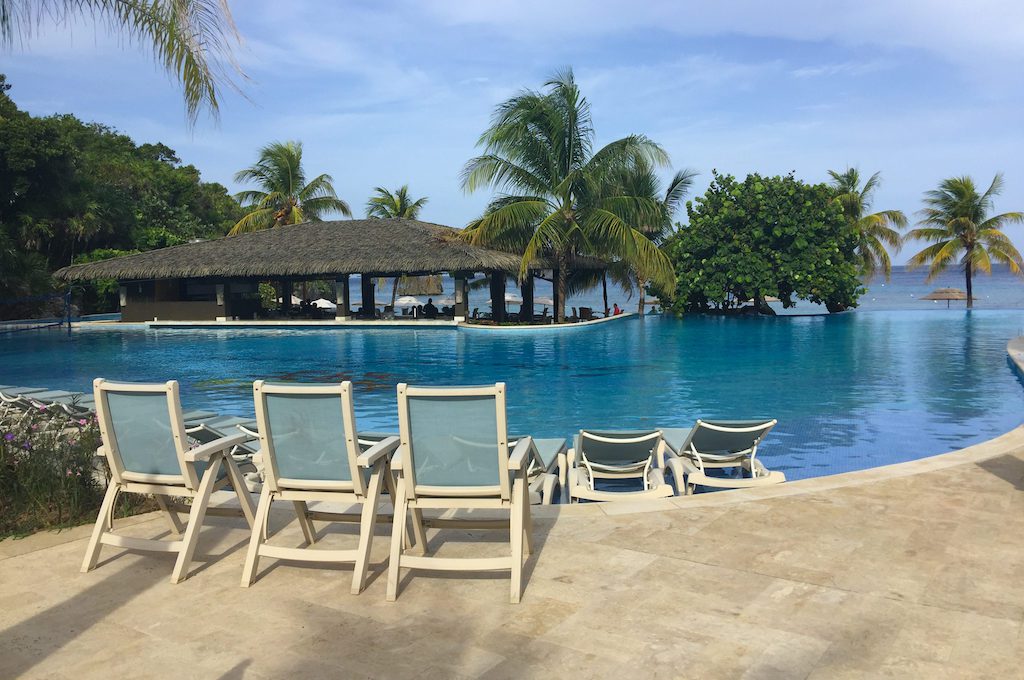 There’s also a restaurant on-site and it’s located where the bar is, next to the pool area. We were offered complimentary breakfasts with our reservations which consisted of a continental breakfast plus a real breakfast. The breakfast we chose had bacon, eggs, beans, and a block of cheese and we found it satisfying. With the addition of rolls and fruits, we were able to start our days off nice and full with a well-rounded breakfast which was really nice considering how long we spend in the sun each day.

I don’t know if we got the perks because we were Expedia Gold members, but once we checked in they offered us two coupons for free drinks at the bar. They also supplied us with two complimentary water bottles that we were allowed to refill at any time with their purified water machine, which was really nice!

There’s a small stand near the restaurant where you will obtain rental gear like flippers and goggles for snorkeling (which cost $15 per day). You can also pick up beach towels at the stand with the cards they give you at check in. Just don’t lose the cards or the towels because there’s a $25 replacement fee for them!

The service from the staff, waiters, and everyone else was outstanding. They were at all times helpful, polite, and friendly and everyone we dealt with spoke perfect English with some nice Caribbean accents. They also allowed us to check in early with no issues. 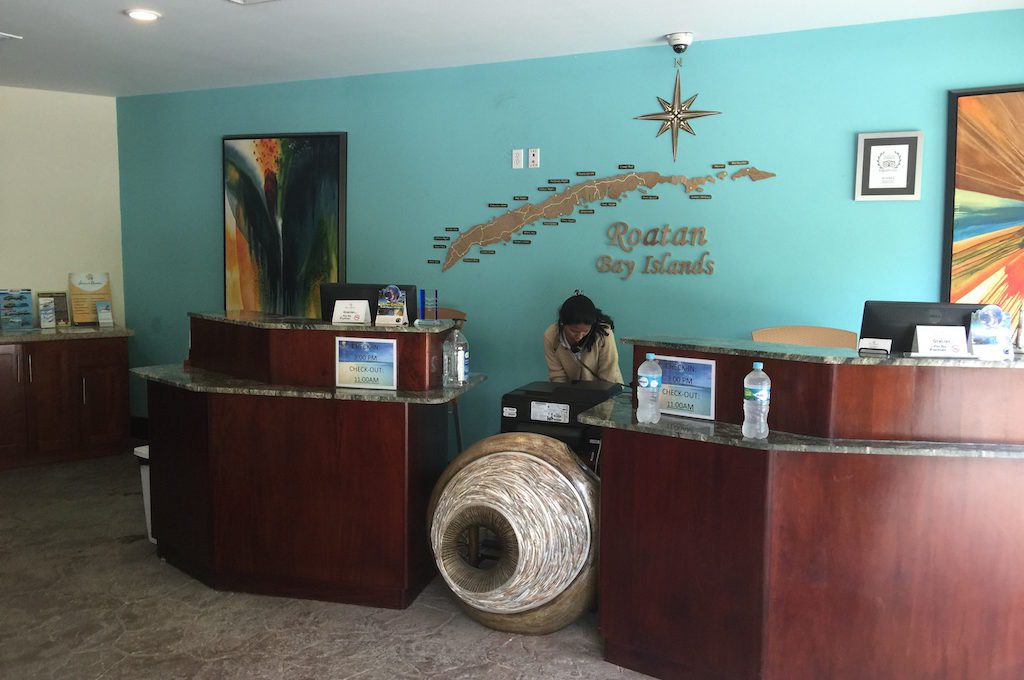 The actual room (or more accurately condominium) left me a little conflicted because there were major pros and cons. I’ll start with the pros.

The first pro is that the suite was extremely spacious. We had the “premium condo with beach view” and loved all of the space from the sitting area to the kitchen area. If you’re planning on staying for a hand full of days, the kitchen area could really be useful as it has just about everything you’d need. 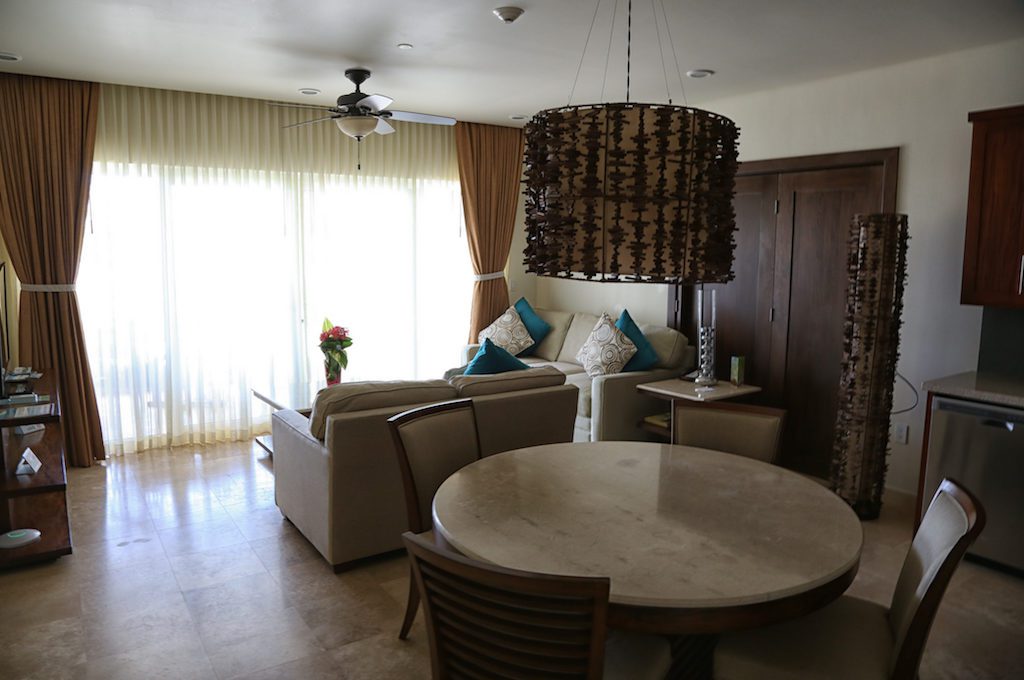 There was a pretty large flat screen TV in the sitting area and some fresh flowers that added a nice touch to the room.

As for the bedroom, the bed sheets were nice and super soft along with the pillows. An additional TV in the bedroom had all of the American channels that you’d expect and came with a guide. Interestingly, the thermostat for the bedroom is different from the one used for the rest of the suite, so you’ll have to play around with those to get the temperature just right throughout the suite. The AC is powerful though so even if it’s scorching outside, your suite will still get quite cool.

The bathroom was again, nice and roomy. The shower had a half-enclosed glass wall that I recall finding in a lot of European hotels. The hotel “decorates” the toilet with a bow made out of what I believe was toilet paper or some type of tissue paper… a nice gesture by the hotel, but it didn’t exactly scream luxury when we saw it and just made us chuckle.

After you spend time trying to figure out how to open the sliding doors, you’re onto the balcony. It’s a semi-private balcony, meaning that you have sort of an enclave with chairs and a table. The outer portion of the balcony extends out further and is connected to the neighboring rooms’ balcony. 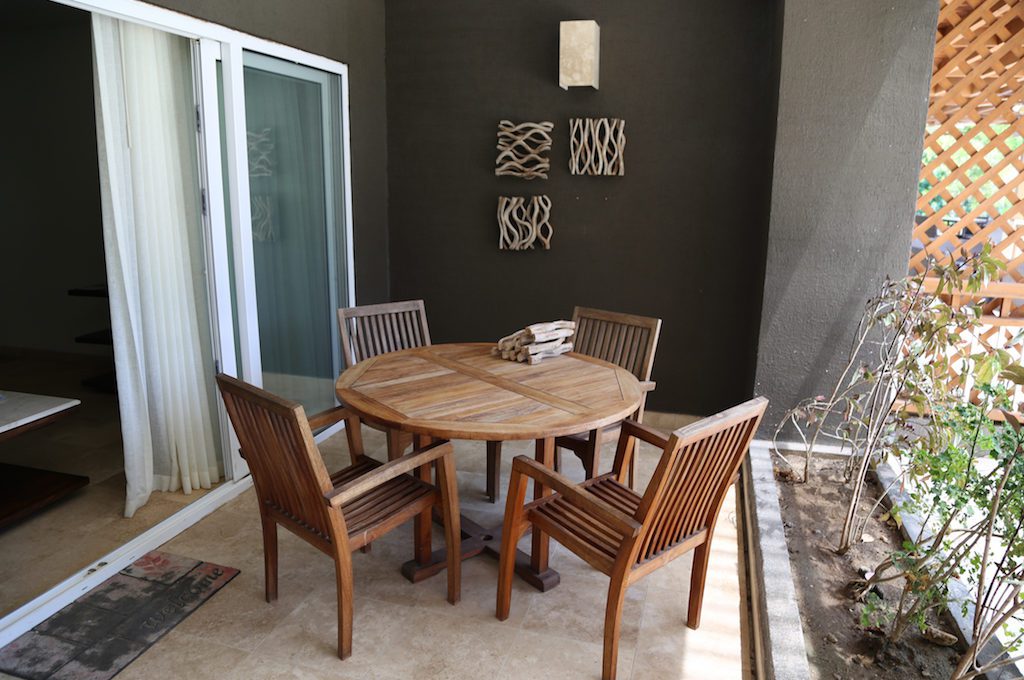 Even though the balcony is shared, the view from it is simply stunning. Palm trees poke through the sand with turquoise reef water in the background forming about as picturesque a view that you could ever ask for.

So those are the two major pros: spacious room and outstanding view.

Now for the two negatives. The first is that there are doors that separate the suites and allow way too much noise through to the point that it sounds like your neighbors have entered into your suite…. We had a noisy family next door to us so it wasn’t a great combination.

The second issue was an odd odor that we found throughout the suite. It wasn’t stinky like the odor of trash, but it was very strong — the kind of strong scent that feels like it might give you a headache if you smell it too long. To the defense of the hotel, they may have done something about the odor had we complained. However, we didn’t complain about either of these things because we spent so little time in the room and we did somewhat get used to the odor. Still, it’s something to be aware of.

Overall, I would absolutely recommend this hotel to everyone. If you have any interest in snorkeling or getting into the water, the location really can’t be beat and the views are fantastic. While we did have to put up with a bit of an odor and some unwanted noise, the pros far outweighed the cons for us and we enjoyed our stay.