Assuming this isn’t an error that will be shortly remediated, Alaska Airlines Mileage Plan has potentially unveiled yet another addition with routing now available to Sydney, Australia on Emirates.

For those unaware, Alaska Airlines Mileage Plan is one of the most valuable programs for award redemptions since it offers some of the best redemption rates, flexible routing rules (stopovers on one-way awards), and if you’re in good with Bank of America, it’s not hard to accumulate miles in batches of 25K to 30L with their personal and business Alaska Airlines credit card. With all of that said, this new redemption possibility is definitely not for everyone.

Alaska Airlines doesn’t belong to a major alliance like OneWorld or Star Alliance but instead it partners with a number of different airlines, Emirates being one of them. Also, Alaska Airlines Mileage Plan is one of those unique programs that has a different award chart for each partner.

The tricky thing about booking partner awards with Alaska Airlines is that you can only book certain partners between designated regions. I learned this a while back when I tried unsuccessfully to search and book an Emirates flight from the Middle East to Asia and sworn up and down that the “damn thing was broken.” Turns out, I just didn’t know what I was doing, since Alaska Airlines only allows one to book Emirates from the continental US.

You can experiment with the award chart here but note that Emirates to Australia is not showing up on the chart yet (but will show up when searching specific routes).

The new routes to Australia

So now a new route has opened up and you can use your Alaska Airlines miles to book Emirates to the Land Down Under. Specifically, the ideal route shows JFK -> DXB -> SYD.

Other routes go through Milan (MXP) en route to DXB and Bangkok (BKK) en route to SYD. This is such a long journey that a stopover might prove to be a necessity. 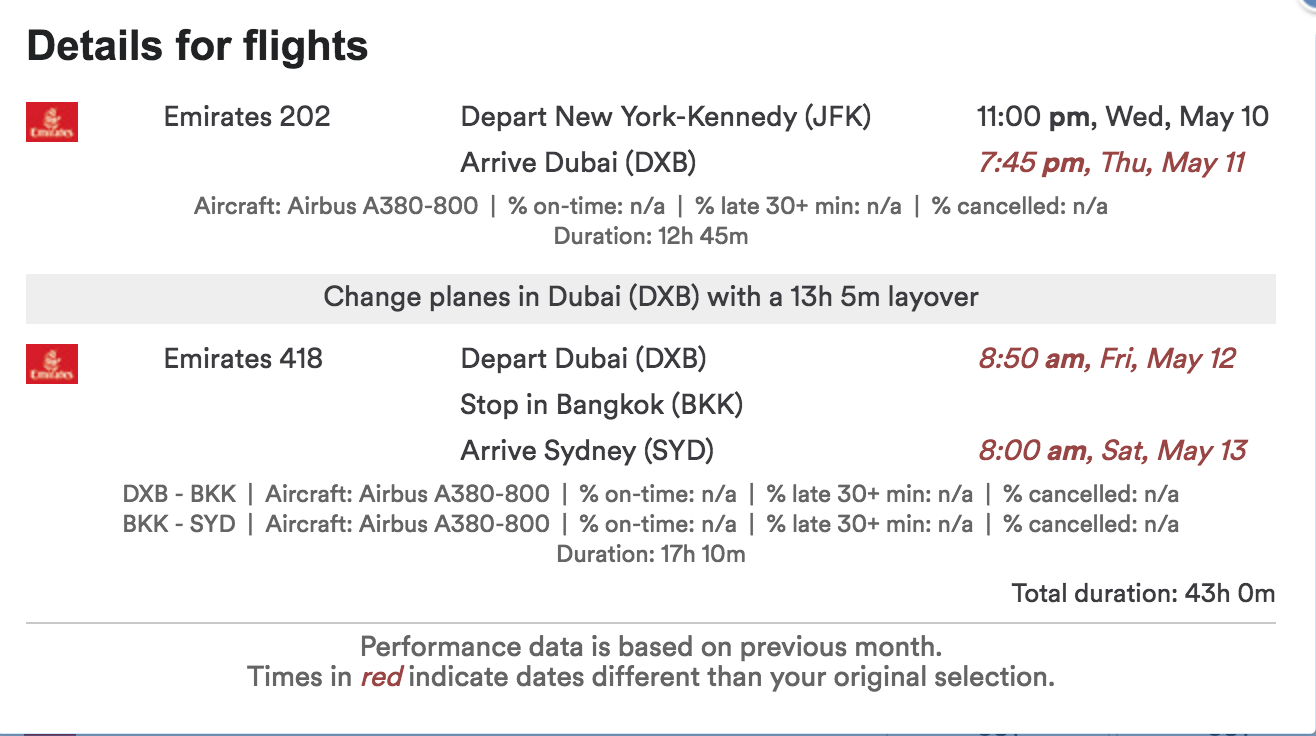 If you’re aware of the most recent devaluation for Emirates’ awards, you probably already know that this isn’t going to be cheap.

Here are the rates for one-way travel:

Cheaper ways to get to Australia

If you’ve read my best ways to use miles and points to get to Australia, you know these figures are nowhere near any of the sweet spots. In fact, you could use Alaska Airline miles to get a round trip in business class on Qantas for 110,000 miles or even go on Cathay Pacific for 120,000 miles round trip. Fiji Airways and Korean Air are also much cheaper options, but availability can be a real issue for those. And don’t forget a roundtrip from North American to Australia on ANA could be as low as 105,000 miles in business class!

Obviously, Emirates is one of the top 3 airlines, so you have to factor that in, but 120,000 miles for a one-way business is hard to stomach for me considering the cheaper alternatives (although it’s nice to see total fees for even a one way first class ticket are only around $50 USD).

As Point Me to the Plane remarks, this may be an option suited for those who are sitting on a ton of Alaska miles and are just looking for a way to finally burn them. If you’re “rolling in the dough” of Alaska miles and have been eyeing a journey on Emirates first class (especially a long one), then you could incorporate a stopover into your journey and potentially spend close to two days living in an Emirates plane and indulging in the Emirates lounge at DXB.

If you really want to fly Emirates, Japan Airlines (with its distance-based chart) is still probably the most effecient way to book a premier cabin on Emirates, but you have to contend with the fact that it’s only a transfer partner of SPG, so accumulating JAL miles can be somewhat of an issue.

Overall, this is a very expensive way to get to Australia and is probably only for those who really want to have the Emirates experience and have stockpiled plenty of Alaska miles. If you just want to make your way to Australia, there are plenty of cheaper options out there that still offer high quality premium cabins so consider those.