I had earned a lot of American Express Membership Rewards over the past year by taking advantage of huge sign-up bonuses like those from the American Express Platinum Cards and supplementing those earnings with spend and even bonuses from other Amex cards like the Premier Rewards Gold Card. So I knew I had plenty of points to get us to Norway and I decided to use Aeroplan miles since they have one of the better redemption rates to Europe and allow you to avoid surcharges by booking with the right partner.

For this trip, we needed 110,000 Aeroplan miles to fly business class for two people to Norway. Membership Rewards transfer to Aeroplan instantly so as soon as we decided to make this booking we initiated the transfer and within a couple of minutes, we had our tickets booked!

The total fees for this trip came out to $24, so only $12 per person! To put that into perspective, according to Google flights, that would have been a $15,210 flight for two people. So we got 14 cents per point in value! That’s a superb redemption!

The route to Tromsø

We started our trip at IAH and spent close to two hours relaxing in Houston’s new Centurion Lounge. Of course, the Platinum Card that gave us our awesome sign-up bonuses always provides us with free access to the Centurion Lounge, which is definitely one of the better lounges in the US and my favorite at IAH.

When people say the Centurion Lounge at IAH is hidden they certainly aren’t joking as it’s just one step down from being considered a speak-easy lounge in my opinion. You’ll have to snoop around the duty free shop in Terminal D, near gate D6, but you should be able to find the elevators to the lounge eventually.

I do love the lounge, though, and always have to go for my favorite cocktail offered there: The Chinese New Year.

From IAH to EWR we flew on United’s business class on the 767-400. This aircraft came equipped with fully lie-flat seats, which surprised me since it’s only about a 3.5 hour flight to New York. They also issued new blankets from United’s Polaris product but everything else (menus, food, etc.) appeared to be standard. Surprisingly, they served up an enchilada dish that was actually extremely tasty, too! 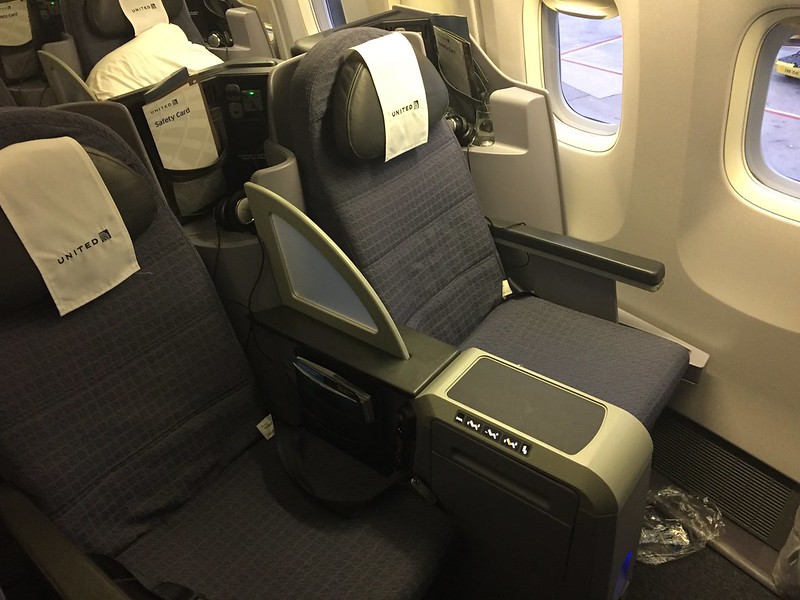 Once we arrived at EWR it was time kill around 2.5 hours on a layover. There’s an SAS lounge at EWR right next to the gates but this lounge was packed and I’m not even sure how we were allowed in. The body heat radiating from everyone inside the lounge made it even worse. So we literally spent about 5 seconds in the lounge and then just went out to the gates.

We got a little lucky with our booking because we really wanted to fly in SAS’s newly refurbished business class on the A330. This route had somewhat limited availability for our desired aircraft and we were booking over the Christmas holidays which made it even tougher to find open seats. But luckily the dates worked out for us and the booking was successful.

The hard product business class on the A330 was pretty impressive. The seats are super sleek in appearance and I love premium seating with a lot of counter space, so these seats were perfect for that.

When the seats are fully reclined, it can be a bit claustrophobic and the blankets and pillows aren’t very thick at all, so I didn’t find the 7.5 hour ride to be quite as comfortable as other business class experiences.

Still, the food, drinks, and service were pretty solid, so overall I definitely had a positive experience on SAS and would fly business with them again. 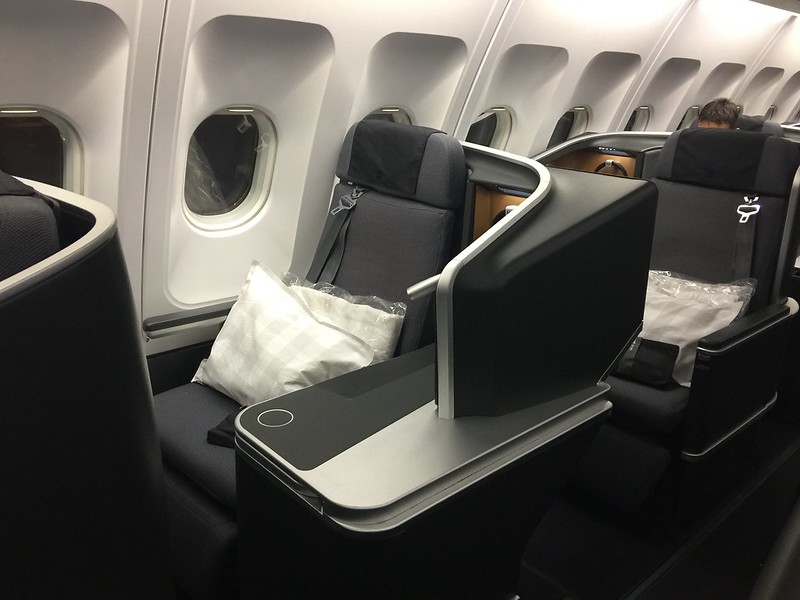 Coming in for landing at OSL. 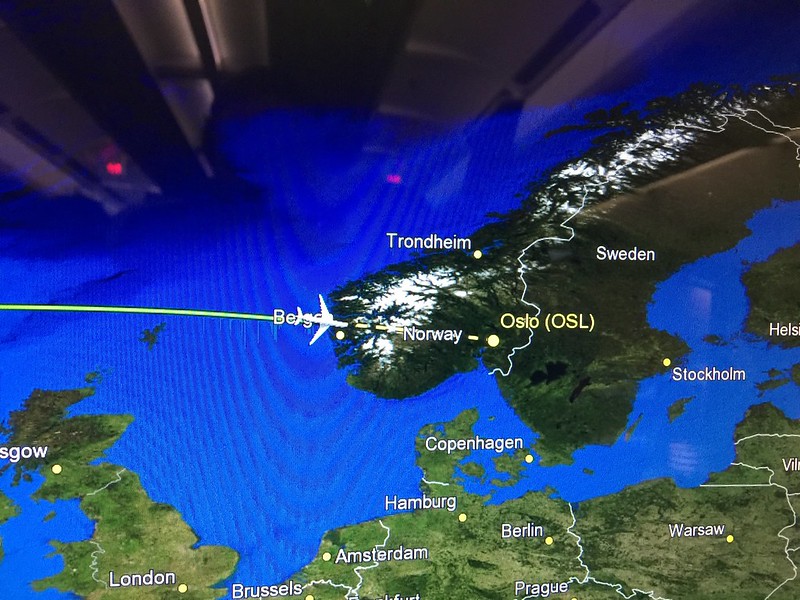 The flight on a 737-800 from Oslo to Tromsø was around a 1.5 hours and we also had “business class seats” also known as “SAS Plus.” From what I could tell, this was essentially the same as Southwest’s Business Select, the only difference is that you have the first few rows reserved for SAS Plus with pre-selected seats. However, everything else from the leg room to the service appeared to be the same, at least on this flight.

We were pretty lucky to catch a solar storm on a clear night (on Christmas) while in Norway so we had an unforgettable experience with the northern lights! 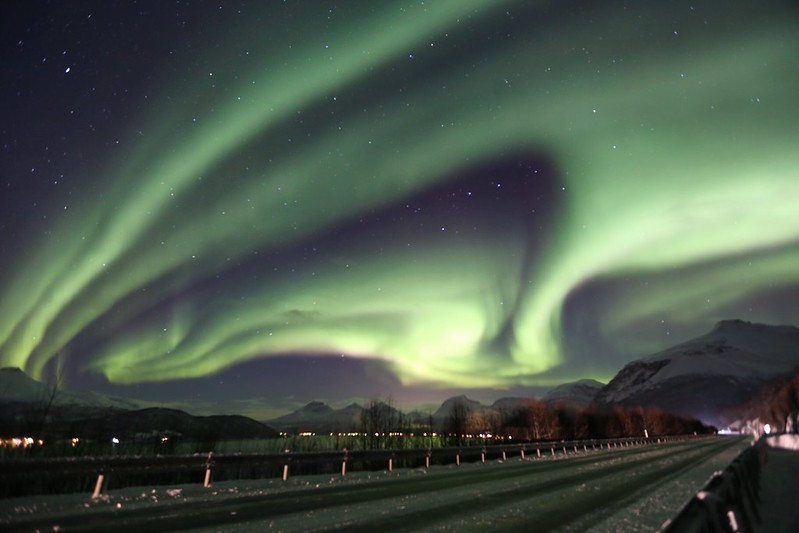 We booked each ticket with 85,000 American Airlines miles. Most of the time it’s recommended to stay away from British Airways to avoid the nasty fuel surcharges which easily come out to over $1,000 for a roundtrip ticket. However, we were able to mitigate the damage done here by booking a one way from OSL to IAH that routed through LHR.

It’s a pretty big difference from just flying straight from LHR to IAH, too. For example, the fees to fly directly from London to Houston were $483.

However, when I routed the flight from Oslo to Houston with a stopover in London, those fees dropped to $260, which is much more reasonable. This worked out conveniently for us since we were already in Oslo for a few days, but it’s also a strategy you can often use to minimize surcharges.

So for two oneway tickets in British Airways first class we paid about $520 in total fees. That’s more than I like to pay but we wanted to experience BA’s first class product and since fees were only around $12 to get to Europe this was a small(ish) price to pay. Also, that’s a $13,824 flight ($22,000 flight directly from London!). So our redemption was about 8 cents per point — not a bad redemption, either.

Catching the northern lights in Norway has probably been my #1 travel experience of all time. And being able to get there and back flying business class and first class for a total of about $550 was a steal. In total we got about $30,000 in value for only $550 but the savings and value gained were only the cherry on top for this trip.