Yesterday, Hyatt announced that it will be offering “Explorist” elite status to cardholders of the Chase Hyatt Credit Card who spent $50,000 in 2016 and this will also be offered going forward as well. While I already wrote about this possibility in my review of the Chase Hyatt card, it’s worth mentioning once more as Hyatt gets ready to launch its new loyalty program on March 1, 2017.

Hyatt is launching its revamped loyalty program called the “World of Hyatt” which is replacing its Gold Passport program previously used. The program is undergoing many changes, one of which is the launch of their new loyalty tiers.

As seen below, the new tiers are:

I’ve said repeatedly that I’m not a fan of these wanna-be cutesy names but I did realize yesterday that you can easily remember their order, since the names do go in alphabetical order, so that’s something…. However, you still get

So Discoverist status doesn’t offer much besides free internet and late checkout. But what about Explorist?

Here are the main benefits of Explorist:

The 4 Club lounge awards that are redeemable for both paid and award stays are a nice addition, but everything else is pretty standard. After all, this is still just mid-tier status. For that reason, I don’t think it would be worth it to spend $50,000 on the Chase Hyatt card to obtain this mid-tier status. That’s a lot of spending but more importantly, that’s a lot of oppurtunity cost.

For one, there are probably a number of sign-up bonuses many people would have to forgo in order to reach that spend requirement. Secondly, that’s also a lot of bonus points you’ll lose out on that could’ve been put on other higher-earning credit cards.

I’m always weary about annual spend bonuses because many of them just aren’t worth it. Particularly, those offering hotel status.

Generally, those spend requirements around the bottom thresholds (~$10,000) are at least worth entertaining to me. For example, the Ritz-Carlton card offers you Gold status after you spend $10,000 (kicks in after the first year of complimentary Gold status). The Citi Hilton Reserve offers a free night after $10,000 in annual spend. Those, I can live with and at least think about going for without having to draw up a serious plan and without losing a lot of potential points, since I put a lot more than $10,000 on my credit cards each year. I wouldn’t go around chasing a lot of these, however.

The annual spend offers get a bit less interesting when they approach the $30,000 mark. Take the SPG card, it offers Gold status for $30,000 spend, but I get Gold status with my Platinum Card from American Express. Both the American Express Hilton Surpass and Citi Hilton Reserve (with annual fees) offer Diamond status for $40,000 spend. That’s nice because it’s top-tier status with Hilton, but I find it much easier to status match to Diamond by using platinum status from the IHG Rewards card. So for many of these offers, there are easier more practical ways to obtain the bonus than dropping $30K or $40K.

And then there’s the outrageous offers. Offers like Ritz-Carlton/Marriott Platinum status (and thus Silver United status) for spending $75,000 on the Ritz-Carlton Rewards Card don’t appeal to me at all because with that amount of spending, I could hit a lot of sign-up bonuses. And even if I didn’t go for many sign-up bonuses, I’d be able to rack up a ton of Ultimate Rewards by using my Chase Freedom Unlimited, Sapphire Reserve, and Ink cards on spend to earn a killing.

Obviously, these offers are often a matter of preference so I’m definitely not saying they are never worthwhile or that they don’t make sense. But generally, in my experience, I don’t find annual spend bonuses for hotel perks/status to be worthwhile, especially really high requirements due to the oppurtunity cost and lack of value I receive from the hotel perks.

I’ll probably put this $50,000 spend offer from Hyatt in the same bucket of “thanks, but no thanks.” If you’re really into earning Hyatt elite status this could make sense for you, but you’d have to really be into Hyatt elite status. If it’s mostly the points you’d be after, you’d be better off putting spend on Chase cards that earn Ultimate Rewards and transferring those points to Hyatt. 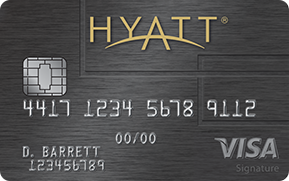 With all of that said, the Chase Hyatt Credit Card is not a bad rewards card at all. In fact, it’s probably one of my favorite hotel credit cards because of the flexibility offered by its annual free night certificates.

The Chase Hyatt card will earn you:

Also, 5,000 Hyatt points is actually a lot since these points are so valuable, so that extra perk for adding the authorized user can get you a free night at a category and/or a lot closer to a free night at a higher category. It’s nothing to scoff at.

The 2X on restaurants, airline tickets, and rental cars is okay but if you have the Chase Sapphire Reserve then it just makes sense to use that card instead since you’ll earn more points per dollar. Also, the Freedom Unlimited will give you 1.5X on everything else and if you have the Freedom Classic or Ink, there’s even more bonus earning potential. That’s why once again, I’m not a fan of loading up significant amounts of spend on co-branded hotel cards. It’s just not worth it to me.

The $75 annual fee is not waived but with those benefits, it’s well worth it.

The $50,000 annual spend bonus is something I won’t be pursuing. I’m not overly impressed with Explorist status and I’d just be giving up way to much in terms of oppurtunity cost to pursue this offer. If Hyatt was offering top tier status (Globalist), then I might take a closer look, but until that’s the case, I don’t think I’ll be chasing after this offer.