Amex just announced a number of big changes to The Platinum Card® from American Express. The biggest two changes were the increased annual fee from $450 to $550 and the addition of a $15/month Uber credit. But according to updated terms and conditions for The Platinum Card® from American Express, there’s another pretty significant change happening to the Priority Pass.

Via View from the Wing, The Platinum Card® from American Express will now be offering a new guest policy for its members. The new terms state:

At any visit to a Priority Pass Select lounge, you may bring in two guests for no charge. You will be charged $27 for any additional guests.

This is a change from the previous policy that did not allow any complimentary guests and forced you to pay $27 for additional parties to enter the lounges with you.

I’ve always been critical of the Priority Pass benefit of American Express since it had the worst guest policy out many of the other premium cards. For example, it just caught up to the two free guests offered by the Citi Prestige® Card but still lags behind cards like the Sapphire Reserve and Ritz-Carlton Rewards Card that both offer complimentary entry to all guests flying together (still unsure exactly how that policy works out in practice).

Although the Platinum’s Priority Pass now still lags slightly behind the Reserve and Ritz-Carlton Rewards Card, you have to factor in that American Express allows two guests or immediate family (spouse or domestic partner, and children under 18) to enter in to Centurion Lounges for free and also offers Delta SkyClub access. The fact that you can now enter with two free guests in Priority Pass lounges, in my opinion, makesThe Platinum Card® from American Express now the holder of best lounge access by far (although you still have to factor in the increased annual fee).

This change, while welcomed, still does not equate to a universal upgrade for the new Platinum Card® from American Express but at least there’s another positive to be had.

Is Priority Pass worth it?

A lot could be said about this question and perhaps I’ll dedicate an entire post to it in the future. If you do the research, you’ll see people all over the place with their opinions. Personally, I’ve had mostly positive experiences with Priority Pass, especially when traveling abroad. Moreover, I’m a big fan of the lounge options provided by The Platinum Card® from American Express/Priority Pass package.

It’s true that the domestic network of lounges is limited, with somewhere over 40 lounges. If you don’t regularly fly in or out of an airport with a Priority Pass lounge then obviously the potential value of the benefit immediately goes down. But when you have The Platinum Card® from American Express, you’re also given access to Centurion Lounges and Delta SkyClubs (when you fly with them), so it’s not always about the locations of the Priority Pass lounges when you’re talking about The Platinum Card® from American Express lounge benefits.

Even if you do live near a Priority Pass lounge, however, it’s possible that those lounges may have policies where they exclude your entry during certain hours based on “capacity control” (even in some cases where the lounge clearly has room). This is an understandingly frustrating experience and if that were my experience and I didn’t also have access to Centurion/SkyClubs, I would need to get substantial value from Priority Pass abroad to make it worth it.

I fly out of IAH a lot where there’s both a KLM and Air France lounge that are part of the Priority Pass network. However, since the opening of the new Centurion Lounge at IAH, I always head there for my lounge visits, but it’s nice to have alternative options in case of overcrowding. So for me, The Platinum Card® from American Express/Priority Pass combo regularly delivers valuable lounge access to me at my local airport without issue.

I admittedly don’t have a ton of experience with domestic Priority Pass lounges beyond IAH, however. I’ve only used a few but I did enjoy the time I spent at some of them like “The Club” at MCO, which was wasn’t crowded and had decent snack and drink offerings. 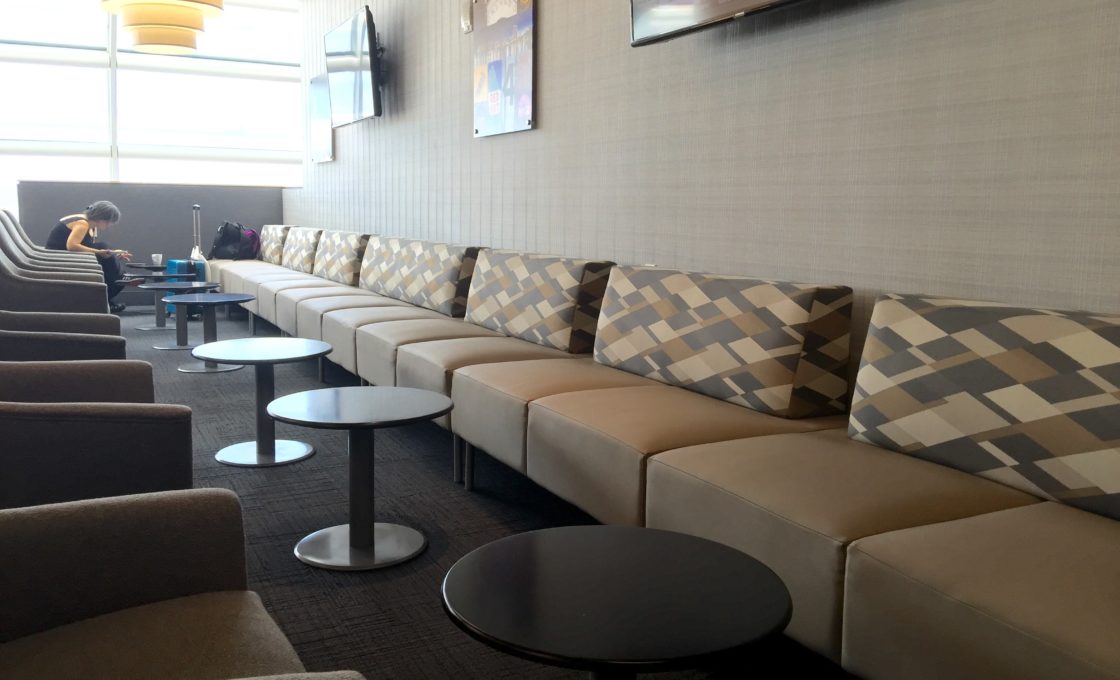 The Club at MCO, a Priority Pass lounge.

A couple of the lounges were in South Africa (Cape Town and Johannesburg). Both of these were the Bidvest Premier Lounges.  They were spacious lounges with decent food, drinks, showers, and plenty of room for us. But more importantly, because we bought cheap economy flights to connect between Cape Town and Johannesburg, they offered us a nice lounge to relax in for a few hours that we wouldn’t otherwise have had access to. When you’re in the middle of a three week round the world trip, that kind of rest time is very valuable.

Another time Priority Pass came in handy was when we arrived at Singapore (SIN) around 3am. We knew we wouldn’t be able to check in to the Marina Bay Sands for some time and we were exhausted (even though we’d just flew Singapore Suites from Tokyo). And since Singapore doesn’t have an arrivals lounge, we found an arrivals lounge that accepted Priority Pass and were able to take showers, get a hot breakfast and snacks, and they even had nap rooms. In short, it was just what we needed, all thanks to Priority Pass.

Not all of my experiences with Priority Pass have been phenomenal. For example, we weren’t allowed access to the Mera Business Lounge lounge in Cancun until after 4:30 pm, so we had to wait it out. And even once inside, it definitely wasn’t a phenomenal lounge but it did get the job done and offered complimentary alcohol and snacks.

My Priority Pass experience is somewhat limited but based on my visits, I’ve had an overwhelmingly positive experience with the lounges both domestic and abroad. I wouldn’t buy Priority Pass access outright but I do think it’s a valuable asset to The Platinum Card® from American Express that works great in conjunction with the its Centurion Lounge/SkyClub access. Now that you can bring two guests along for free, I think The Platinum Card® from American Express offers the best lounge access, albeit at a higher cost now.