If you haven’t noticed, your in-flight dining experience might not always come with the most flavorful foods and drinks. Sometimes this comes down to poor dining options, but there’s actually a lot of factors (some very surprising) that affect your taste buds while flying at altitude. Here’s a look at the multitude of factors that re affecting your taste while in the sky.

What happens to our sense of taste?

When you’re flying at 30,000 feet or higher, your taste buds and sense of smell are one of the first things impacted according to Russ Brown, director of In-flight Dining & Retail at American Airlines. Specifically, he sates that, “Flavor is a combination of [sense of smell], and our perception of saltiness and sweetness drop when inside a pressurized cabin.” But interestingly, sour, bitter and spicy flavors go almost completely unaffected.

But what specifically causes this?

Charles Spence, a professor of experimental psychology at Oxford University, states three main reasons for why our senses are affected:

According to BBC, at about 30,000 feet, humidity is less than 12%, which is drier than most deserts. With less humidity, passengers become thirsty more quickly as there is less moisture in their throat, which also slows down the transport of odors to the brain’s smell and taste receptors. (In case you didn’t know, up to 80% of what we consider to be “taste,” is actually smell.)

So the effect is like having a cold and being deprived (to a degree) of taste/smell.

In fact, that dryness combined with the low pressure can reduce the sensitivity of your taste buds to sweet and salty foods by 30%, according to a 2010 study conducted by Germany’s Fraunhofer Institute for Building Physics, commissioned by Lufthansa.

It didn’t surprise me to find out that cabin pressure and dry air could affect our taste buds, but the one factor that really took me by surprise was background noise.

According to BBC, “A study found that people eating to the sound of loud background noise rated food as being less salty and less sweet than those who ate in silence… [and] those surrounded by noise, food surprisingly appeared to sound much crunchier.”

But sound doesn’t affect our tastes equally, For example, “seasonings like cardamom, lemon grass and curry taste more intense in the sky than salt or sugar.” And that savory “fifth” taste known as umami, also intensifies with more background noise. This is said to be the reason why so many people prefer tomato juice or Bloody Marrys while flying.

The source of the umami intensification might be that background noise raises an ancestral instinct of danger or struggle. During those times, savory-tasting umami foods may have prompted dollops of saliva, “in order to get the energy to fight or flight,” according to the New York Times.

So there’s a trifecta of factors — including one very unexpected one perhaps rooted in your early survival instincts —  working to hinder your ability to satisfy your in-flight appetite.

But that’s not all you have to take into consideration.

Remember, at the end of the day you’re being served a meal on a moving vessel flying though the sky. In case you weren’t aware, open flames are not allowed on planes. Instead, airlines rely mostly on convection or steam ovens to heat up their meals, although you might find rice cookers, skillets, or toasters on some airlines like Cathay Pacific.

Most airplane food has to be first cooked on the ground (especially true for economy passengers). The actual cooking is often done by third party catering providers. The largest of these is a subsidiary of Lufthansa known as LSG Sky Chefs, which partners with more than 300 airlines around the world, including American Airlines and Delta. However some airlines like Emirates take care of their own catering.

The cooking generally takes place about 10 hours before a flight but meals are not cooked all the way. Chicken is said to be cooked at about 60% of the way while steaks are only cooked about 30% of the way. After that the food is packed, blast-chilled, placed in a special refrigerator, and then re-heated in the air. Sometimes if flights are delayed food can spoil and entire batches have to be thrown out to avoid passengers becoming sick.

That’s a lot of steps and then considering all of the the other factors that are working to alter the taste of the your meal, it’s a wonder that anything comes out edible, to be honest.

What are airlines doing to improve their food?

To combat flavor loss, airlines incorporate stronger spices and more seasoning into their meals. For example, caterers on Lufthansa add more salt to bread rolls. But adding heaps of salt and other salty ingredients can make many foods which are already on the less healthy side, even more unhealthy.

That’s why some airlines like British Airways and Emirates have gotten creative. According to traveller.com.au, a spokesperson for British Airways said that its chefs turn to those umami-rich ingredients like mushroom and tomato to flavor the food and avoid increasing salt quantities too much.

But those seasoning adjustments and substitutions have to made my someone who knows what they’re doing in the kitchen. So over the past few years, there’s been an increased focus in delivering higher quality dining on planes,

Some airlines like Etihad have gone on hunts to recruit chefs from Michelin-starred restaurants all around the world to service their “five star restaurant in the sky” for their first class product (their coach meals aren’t too shabby either).

In addition to the recruiting award-winning chefs, airlines like Singapore Airlines work in conjunction with their in-flight catering providers and utilize simulated aircraft cabins like the one at Singapore Changi Airport. There, they cook and test their meals under similar low-pressure conditions to replicate the effects of altitude on their dishes.

Many airlines focus on keeping their dining experience fresh by frequently changing up their menu. For example, Air France has their chefs completely overhaul their menu selection every eight months and offer a selection that rotates every 10 days.

Other efforts may involve psychological elements, such as when airlines provide you with heavy cutlery, and plates, which is proven to make the food taste better. In fact, Delta will soon be implementing new china and Alessi silverware in its premium class. British Airways’ even has an interesting “synesthesia” approach where they’ve supplied soundtracks that you can listen to on your noise-cancelling headphones to bring out certain flavors.

And more recently, we’ve seen airlines go out of their way to deal with the effects on drinks. British Airways actually worked with Twinings Tea to create the perfect tea blend that tastes just right served at altitude when heated to 89ºC, since water can’t safely reach a true boiling temperature on an airplane.

Wines can be tricky because liquids expand and contract according to atmospheric pressure and as a result it’s common for wines to thin out and become much more acidic. To combat this airlines may go to great lengths to choose their wines. For example, Qatar Airways provides wines specifically chosen through blind taste-tasting from world-renown wine masters who might narrow down over 100 options down to just three.

The focus is often on wine selections with lower acidic contents, but given the high acidity of drinks like champagne, this isn’t always easy. This is why it’s often recommended to have your champagne and wine during pre-departure. 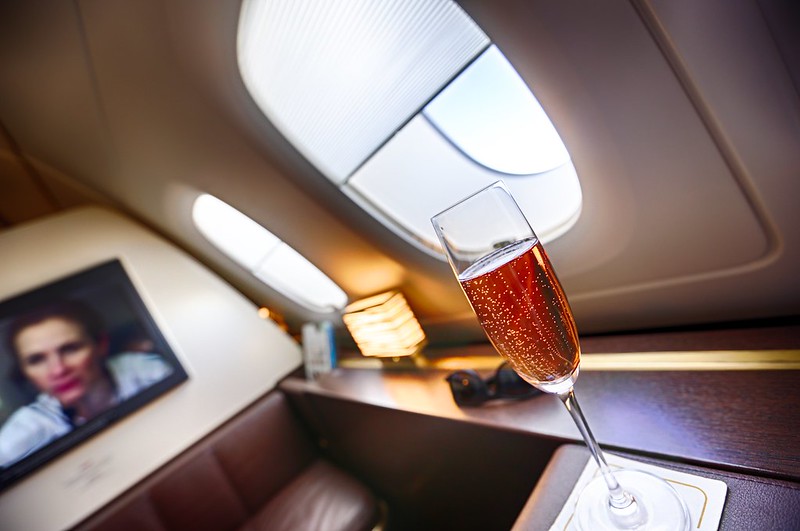 Cathay Pacific just got creative and announced their new beer specially crafted for drinking at altitude, although Scandinavian airline SAS has been doing this for years.

It’s interesting the lengths that airlines are going to in order to provide a quality dining experience, especially for premium cabins. I’ve been absolutely blown away by the quality of dining from first class and business class experiences on Etihad, Singapore Airlines, and even British Airways. It’s pretty amazing what some chefs are capable of doing given the many limitations they face, and I’m sure we’ll only see the effort from airlines increase to deliver quality dining options in the future.