This flight was the first leg of our round the world trip where we flew in some of the top premium cabins, including the Etihad Apartment and Singapore Suites over the course of about a three week span. After flying in from Houston to Los Angeles, our trip really kicked off at the LAX Star Alliance Business Class Lounge. It’s one of the nicest lounges in the country in my opinion and comes with a cool two-sided bar that serves up a little of everything.

It’s a big lounge with both an indoor and outdoor terrace and even a TV/movie room, so there’s plenty of options for you to relax in. The indoor terrace overlooks the shops in the terminal and there’s a good amount of seating outfitted with power outlets, too.

We opted to plane spot from the outdoor terrace for most of the time and while the plane spotting is a bit limited, it still felt amazing to soak up some of the California sunshine as we awaited boarding. The outdoor lounge was almost completely empty, aside from one other guest, but I’m sure it can be a lively spot when the bar is open and there’s a bit more traffic.

We flew the 11.5 hour flight from LAX to NRT (SQ 11) on the A380 but this route is now served by the 777 and unfortunately the only Singapore Airlines route flying the A380 from the US is the route out of JFK to FRA -> SIN.

We were among the first passengers to board our cabin and found our seats in the front portion of the upper deck. On the A380, the entire second deck consists of 86 business class seats in a 1-2-1 formation although some versions also come with one section of economy in the very back (2-4-2). It’s a cool set-up to have a full deck of business class and on this flight, I’d say the business class cabin had to only be 50% full, if that.

Within seconds of seating we were given our hot towels and champagne glasses and I took a look around.

The first thing you’ll likely notice about Singapore business class is that the seats are really  wide. To me, they almost look like living room recliners.

They’re listed as 30″ wide but they felt even wider than that. (The business class seats on the A350 are two inches narrower.)

While I loved how wide the seats were, I couldn’t help but think that the seats looked a bit dated. The dark brown and tan coloring along with the turquoise pillows isn’t bad but the exterior of the seats just looked a bit bland to me. 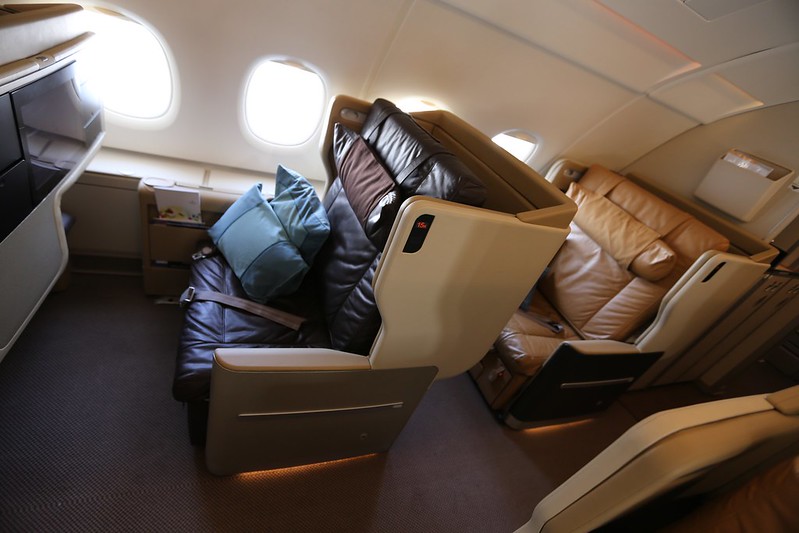 For example, if you compare them to the newer Singapore A350 business class seats, I think there’s a huge gap in the sleekness factor happening.

In any event, the seats are still extremely comfortable and you’ll have more room than you know what to do with, which is pretty much all that matters on a plane.

Each business class seat is outfitted with a 15.4″ LCD monitor and equipped with a great in flight entertainment system with just about everything you’d expect. The LCD screens have somewhat of a privacy glass feature, which is nice when you’re seated in the middle section.

You’ll also find a panel with a universal power outlet and two USB ports, along with a small shelf to put all of your belongings in.

There are overhead storage bins you can use but they probably won’t be able to store your larger belongings. Instead, you may have to put your carry-on items beneath the footwell. Personally, I loved having quick access to both of my bags down there but I’ve read a few complaints from others about their luggage getting in the way. Perhaps they stored some very large bags?

I think my only complaint with the seat is the limited foot room in the cubby. For as much wide open space you have for your upper body, it just feels odd to have such a small cubby for your feet. 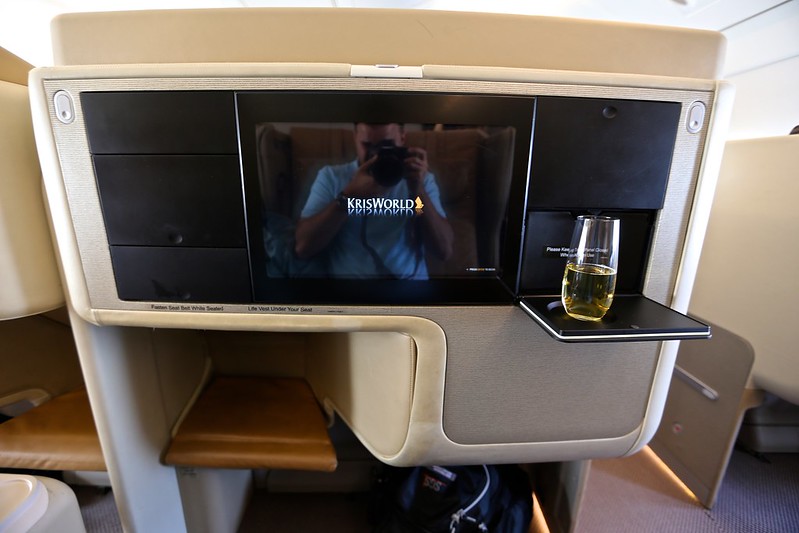 I’m sure some people don’t have complaints over the space but for me it was just a tad bit small, although it didn’t affect me that much when sitting or reclining. 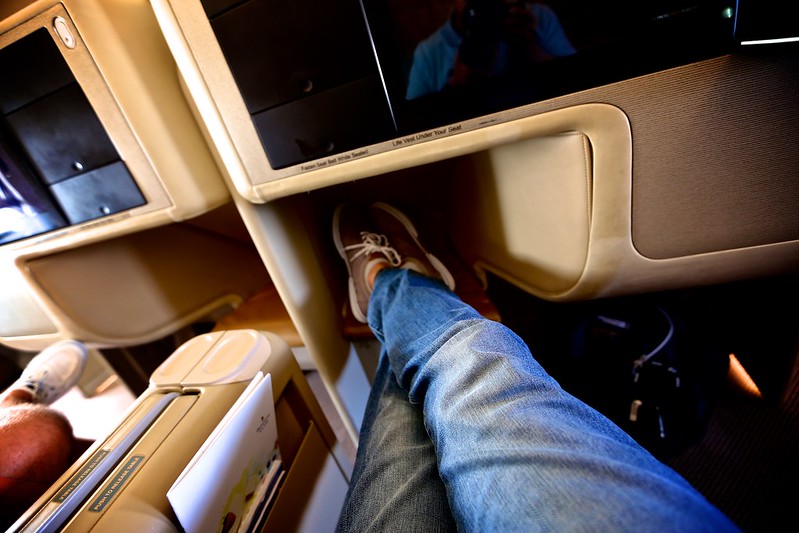 To avoid that issue you can always book a seat in the bulkhead row for maximum legroom. We did this on the A350 and had plenty of wide open room for our feet, as seen below. I highly recommend doing this, and I’ll definitely be sticking to the bulkhead seats with any future flights with Singapore Airlines business class.

The seats provide you with some decent privacy but it’s mostly because they are so spread out and straight-facing, since the sides of the seats don’t extend that far out like they do on the A350. We didn’t have any neighbors to our left or right, so it felt like we had maximum privacy. 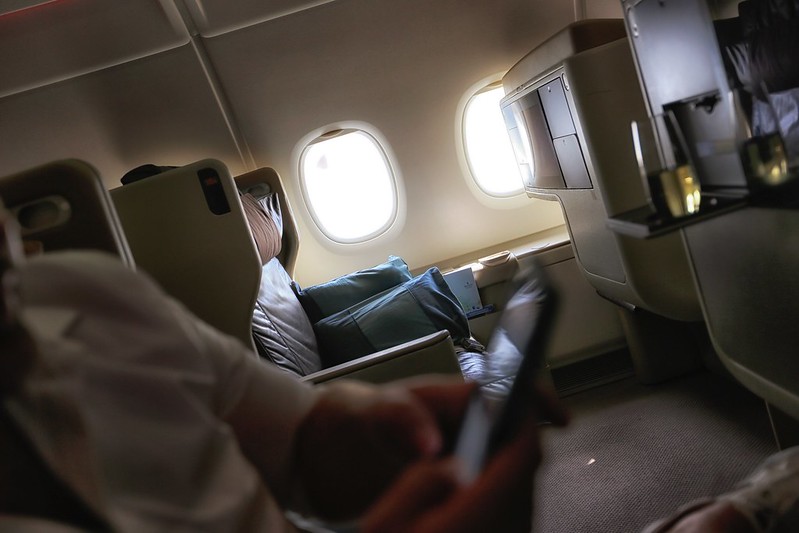 Singapore Airlines is known for offering a great dining experience and they lived up to the expectations on this flight.

The appetizers brought out were marinated prawn and parma ham with vegetables.

Brad went with a nice glass of red wine.

And I went with the “Singapore Sling,” which is a  gin-based cocktail created in Singapore back in 1915 and a must-try when flying with Singapore Airlines.  It comes with dry gin, DOM Bénédictine, orange liqueur, cherry brandy, lime and pineapple juice, and a dash of Angostura bitters and Grenadine. It packs quite the punch, so be sure to respect it!

(In case you wondering, too, a “sling” was originally an American drink with spirits, water, and flavorings.)

Rolls were also brought out along with butter and olive oil.

And then the main dish: braised chicken in morel mushroom sauce with a side of fried rice and Chinese greens. This was an excellent dish and rich in flavor, likely due to the mushroom sauce which is known to enhance flavors while flying at high altitudes.

And to cap things off for dessert I went with Ben and Jerry’s Cherry Garcia, which was my first time trying out this well-known ice cream. Some times simpler is better, and I enjoyed the dessert.

What I liked about the meal was that it was mostly healthy-ish items, so I didn’t feel over-stuffed by the end of dinner. All too often, I eat a carb-heavy dish or load up on one too many appetizers, but on this flight the meals were light and reasonably portioned, so I felt much better after taking my last bite.

I’d like to add that the service on this flight was phenomenal. The attentiveness and attitudes of the flight attendants were among the best I’ve ever experienced and only slightly surpassed by my experience flying first class on Singapore Suites (which we flew a few days later). Later on, on my flight in business class from SIN to JNB on board the A350, the service was not as great, however, so I don’t know if it was the route or the aircraft, but the staff blew me away with how professional they were.

Singapore business class seats are interesting because the seats don’t recline into a bed like many other seats do. Instead, they fold down and then the bed is made on top of the back of the seat. Some people like this since lie-flat seats don’t always offer you a true smooth surface to get comfortable on but others find it a bit annoying since you can’t recline all the way and you have to completely redo your seat when you want to sit up.

You can still prop yourself up using the two pillows and sit up and be reasonably comfortable, though. I did that for a substantial portion of the journey and didn’t have any issues.

These seats are so wide that it’s very easy to get comfortable on. I sleep on my stomach and pretty much can’t fall asleep any other way so I’m always thrilled when a business class or first class seat gives me enough room to get comfortable in a natural position.

The second round of meals served just before touch down were more interesting. The first dish was a “Salmon Trilogy” with gravadlax, hot and cold salmon with cucumber salad and herb dressing. Wasn’t quite the breakfast food I was imagining but since we were arriving in the evening I guess it made more sense.

Next came the tavern pork burger with manchego cheese. I try to avoid meats late into a flight and rarely eat pork, so I was kind of reluctant to choose this dish. However, I thought it would be more hearty than the chicken noodle soup. To my surprise, the burger was one of the best dishes of the flight and actually tasted fresh.

And then finally, it was time for one last hoo-rah with dessert. This one, a Bavarian cream dish, was a bit more fancy and rich than the Ben and Jerry’s but a perfect way to finish up the flight.

Singapore Airlines offers my favorite business class product. It’s partly due to the service and dining experience, but also due to the super-wide seats that allow for maximum comfort and space. I personally prefer the sleeker A350 seats (I also think they are found on the 777), but these seats on the A350 are even wider than those and it’s hard to find a business class product that can offer you so much space.