The Star Alliance is the largest airline alliance out of the big three (One World, Star Alliance, and SkyTeam). This means that you can use your Asiana miles to fly on any of these other airlines.

How to get Asiana miles?

One of the issues with Asiana is that it’s difficult to accumulate miles for them. They are not a partner of Chase, American Express, or Citi, so you’re left with earning non-flight miles with SPG or a cobranded credit card. The Asiana co-branded airline credit card is issued by Bank of America. It comes with a 30,000 mile sign-up bonus after you spend $3,000 in 3 months. It also offers you:

Overall, considering that you can’t transfer points to Asiana, it’s not a horrible card and the bonus earning is actually above average for an airline credit card.  (There’s also a business version of this credit card as well, though it typically comes with a much lower sign-up bonus around 10,000.)

Asiana has an award chart for its own metal and a separate chart for partners. Here is the reward chart for flights on Asiana. You’ll notice the different categories that you’ll probably not familiar with. Business “Smartium” Class is a true business class with lie-flat seats. First class is their standard first class and first suite class is their fancy first class suites, which are highly regarded. It sucks that unlike other airlines they charge more for the suites but that’s just the way it is. It’s worth noting that Asiana permits one way awards. Here’s how they define the regions:

You can get around the high-peak season requirements in the following cases:

Overall, many of the redemption rates are pretty competitive. Asiana does have the drawback of adding fuel surcharges to their own flights. So, for example, a flight from LAX to ICN roundtrip may run you $250 in total fees, which for Asia really isn’t that bad (although fees are much cheaper with Korean Air). For Asiana awards, you can add a stopover at ICN for each one-way segment of your award. 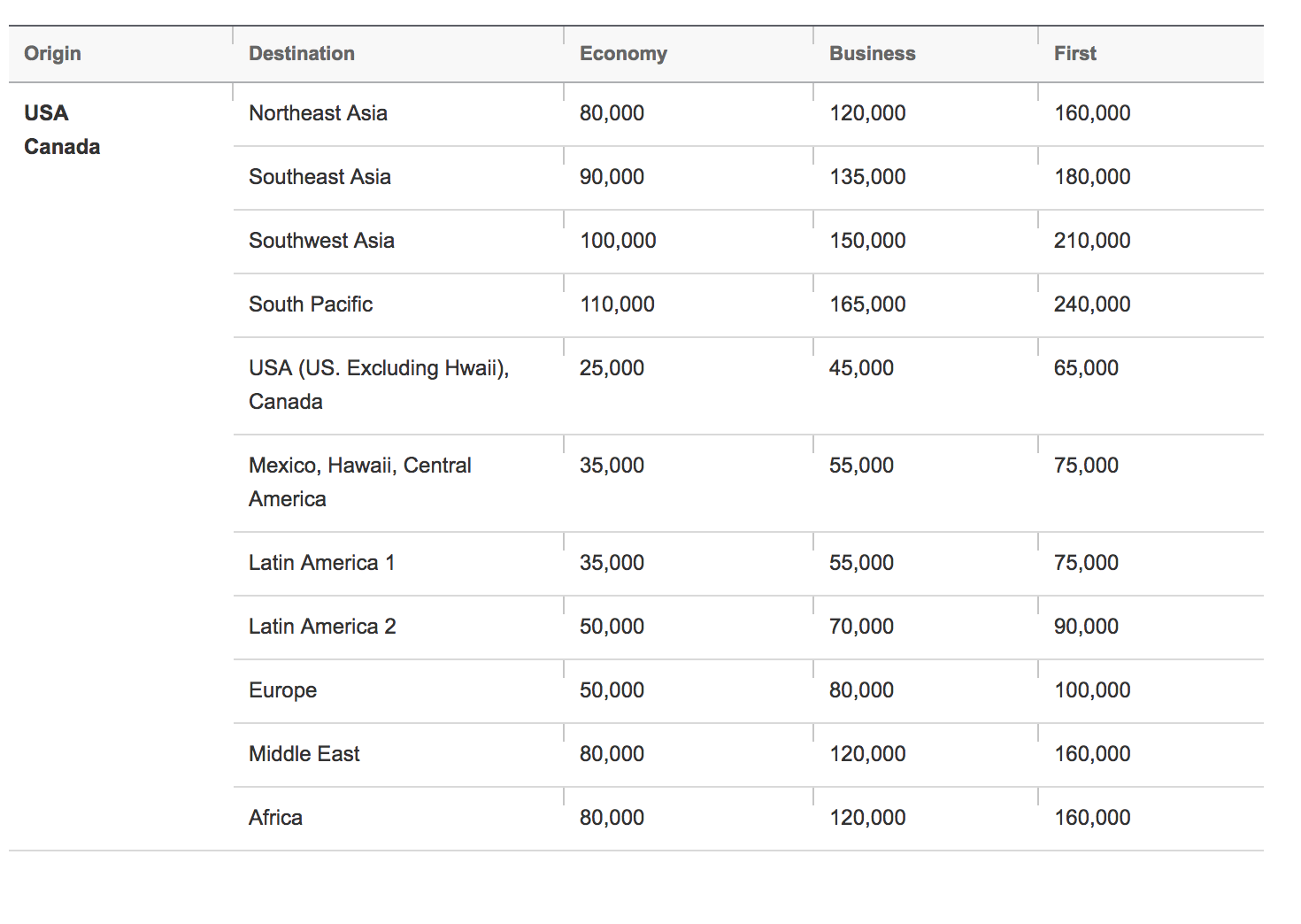 Here are the regions defined for Star Alliance awards. Notice that several Northern Africa countries are placed in Europe. You can work stopovers into your partner awards but Asiana will increase the price of your award. For example, the below shows a redemption award from Korea to Miami. The first route shows a layover in New York while the second shows a stopover in New York.  Note the increase in price with the stopover. 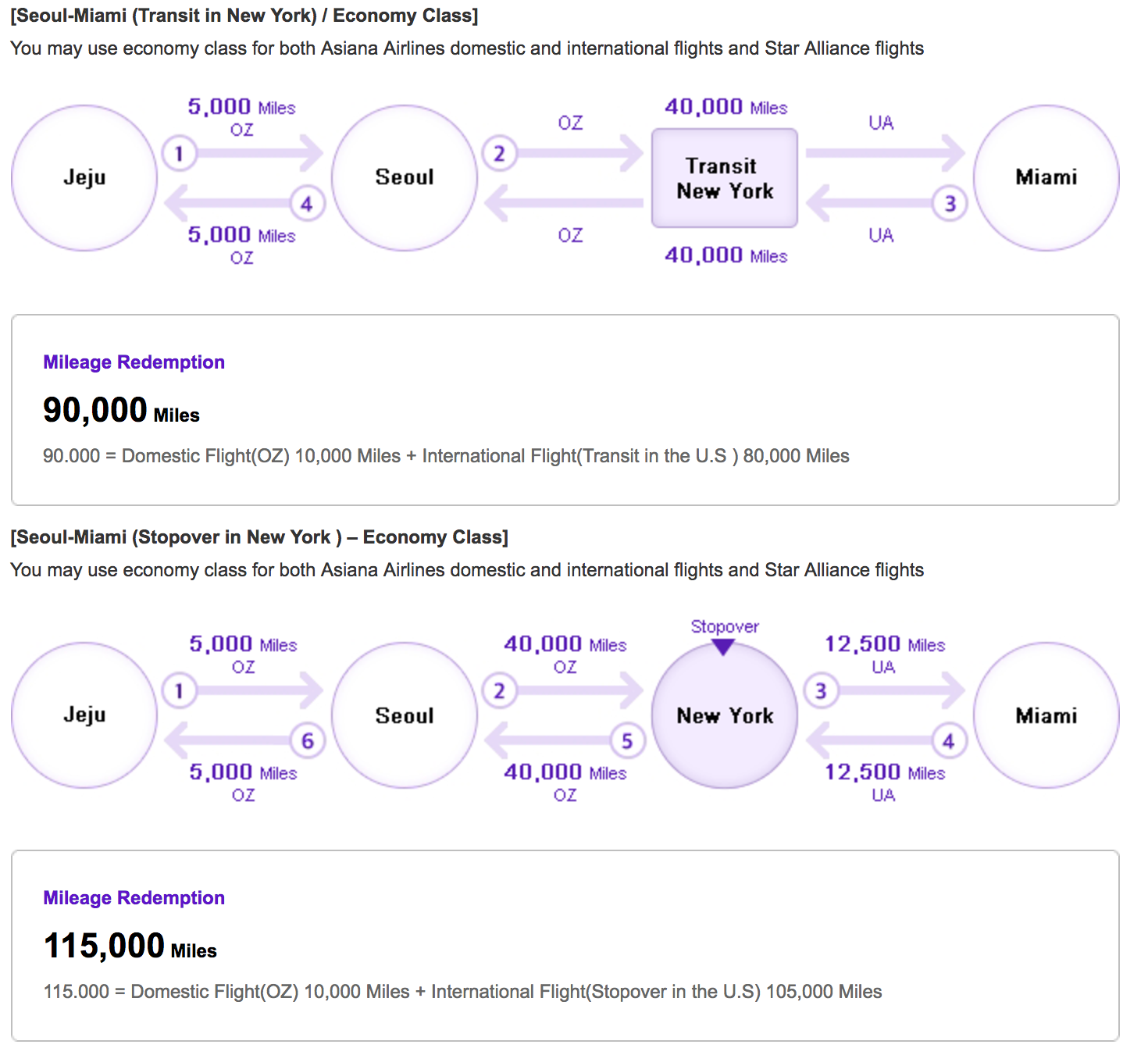 Thus, stopovers aren’t free on Asiana when booking partners and will instead increase the redemption requirement.

Fuel surcharges will also be imposed on many partners but you can get around them with certain airlines like United and I believe Air Canada. You can also avoid surcharges on Etihad — here’s the  award chart for Etihad. (Qatar is a partner too but they’re not listed on the partner award chart link like Etihad is.)

Asiana does not allow you to book partner awards online. You’ll need to call in to their call center which is open during normal business hours (Pacific time) and can be reached at 1-800-227-4262. There should be no fee for making a booking over the phone.

The cancellation/refunds fees are cheap with Asiana (usually only $30) and it’s actually free to make changes to your booking assuming you keep the same fare. Here are the what the terms state.

Asiana has some excellent redemption rates, which is really what makes this program so attractive. Here are 5 great examples of Asiana sweet spots.

Alaska, ANA, and JAL beat out the business class redemption rate by about 20,000 to 30,000 points. Since ANA is a Star Alliance partner and transfer partner of American Express, it’d probably be easier to go with them to book Star Alliance partners. Still, 120,000 isn’t a horrible rate and is competitive to many other airlines.

The real sweet spot is getting around Korea. It’s only 10,000 for a roundtrip flight and one of the most effecient ways to use miles for Korean domestic flights. I recommend to always consider paying out of pocket for ultra short-haul flights, though, because sometimes it makes more economic sense to just shell out a little bit of cash on a budget airline than use your points.

Getting to places like Thailand in business class can be a great use of Asiana miles, as it’s 25,000 points cheaper than United. You’ll just have to lookout for the fuel surcharges because they might be high on this route.

Asiana’s partner redemptions from the US to southern South America also called “lower” South America (or Latin America 2 by Asiana) are among the best out of any airline. You can book flights to South America without any fuel surcharges so these redemptions are cheap with points and fees, making Asiana one of the best ways to get to South America. And that’s true for both economy and business class.

Asiana might just be the best miles and points program for getting to Europe.

The rates are very hard to beat at 80,000 miles. But with Asiana you should be able to get around surcharges by booking Star Alliance partners United and Air Canada, making that 80,000 roundtrip business class redemption one of the best redemptions for any destination in the world, in my opinion.

And the deal is still a great one for first class. The 100,000 roundtrip rate or 50,000 one way on first class is terrific. Fees on certain airlines such as Lufthansa can add up but on a one way award they can be as low as $291. Since you’d only be paying 50,000 miles for that one-way awards, that’s not too bad

Business class flights around the US

The standard roundtrip business class rate is 50,000 but with Asiana you can book these for only 45,000 roundtrip. This might be an even better deal in the future since United is increasing the business class redemption rates on certain premium rates like LAX/SFO to EWR. These routes will be jumping up to 70,000 roundtrip so being able to book them for only 45,000 would be a huge win.

Asiana is one of the best award programs for getting to Europe and South America, and has competitive rates for getting around to other places as well. Given the potential to book Star Alliance partners with no fuel surcharges and other awards with reasonable fees, I think Asiana should be on your radar.