And as much as I hate to admit it, I’m honestly sort of underwhelmed….

Let’s take a look at the photos (which I’ll be happy to take down upon SQ requests).

The first couple of photos show the full interior of a single suite. The biggest thing that sticks out is that there’s a separate bed from the seat. It looks like the seat likely swivels around, too. The image below doesn’t look bad but the suite has a very “dentist-room” look and feel to it. It sort of has a slightly futuristic look going on too but has an overall bland look to it that is much different from the charming Singapore Suites that came out in 2007.

Another issue is that the seat looks a bit narrow, almost resembling a premium economy seat. I’m sure the seat is very comfortable but it does look a tad narrow, especially considering how wide Singapore loves to go with its seats. This also makes me wonder how far back the seat will recline, as some seats like the one found in the Etihad Apartment don’t recline as far back as many would prefer, resulting in a less comfortable experience.

You can see what looks like a tablet below, so I think that they are going to integrate IFE into a tablet-controlled system and who knows… maybe you’ll even be able to request service through it? All of the photos have the beds out so I’m really wondering if you’ll be able to fold up the bed against the wall, as it would seem odd to have the chair facing the bed with no room for your legs.

This next photo shows what many of us wanted to see: another double bed set up! It looks like they are going to keep this set-up with at least a couple of the new suites. Notice the large TV screens on the right and what I think is a tablet in the middle of the screen. There also looks to be a mini vanity mirror behind the seat. I doesn’t look like you’ll be able to dine across from another in the suite, though that issue might be somewhat remedied with a small lounge.

And then there’s this leaked map below of the A380. It shows a lot of things going on right outside of the first class cabin. I’ve got to assume that that are will consist of some type of bar or lounge area but it’s difficult for me to tell. It also looks like the business class seats might still have footwells at an angle based on the map but that is still speculation. It’s worth noting that the Singapore business class seats will be more concentrated than prior A380 models.

Lastly, the lavatory in the front of the first class cabin looks huge! We know Singapore will not have showers but the given the size of that room, you’ve got to think that it might be a little spa-like or something similar. 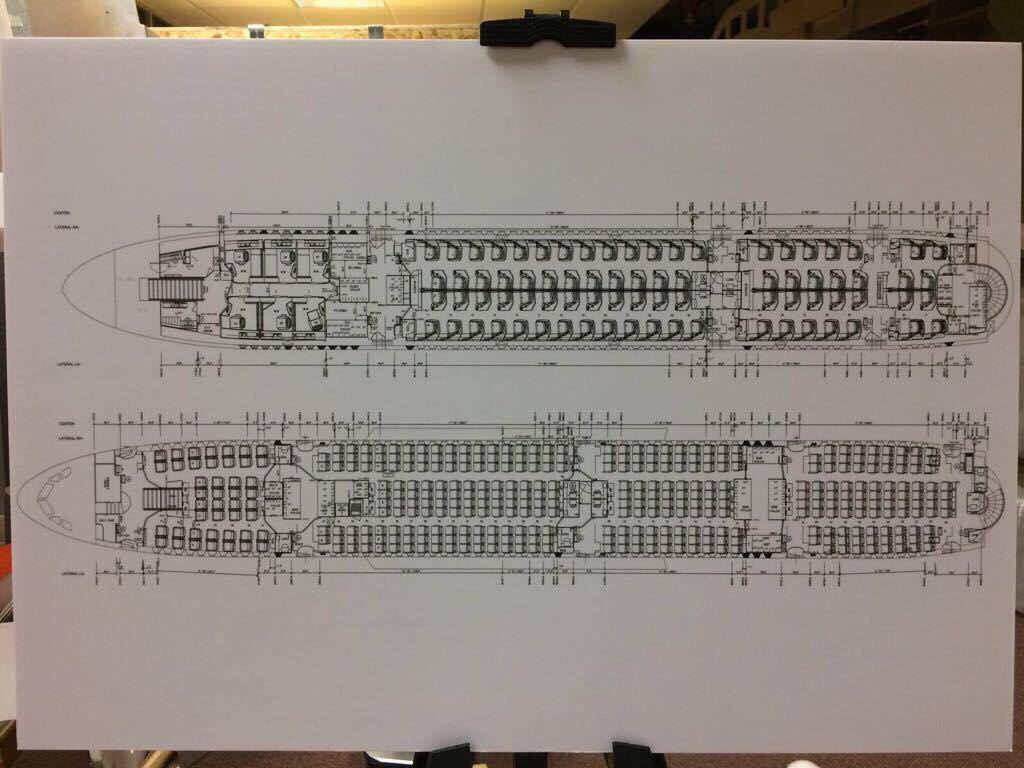 I keep reminding myself that this is not the official release and these are images probably taken on a cell phone in office lighting conditions so the product isn’t exactly being seen in its full glory. Although the suites do look very sterile and bland compared to the old Singapore Suites, it’s possible that they might not look that way when they are fitted inside the plane with proper lighting, etc.

I will say on the bright side that these suites look huge. I can only imagine how big they feel when they are shared with another passenger and the partition is down. We also haven’t seen the full cabin yet. I’m going to hold off my judgment until we get to see the full cabin officially revealed later this week but my initial reaction unfortunately is not the blown-a-way excitement I was anticipating.