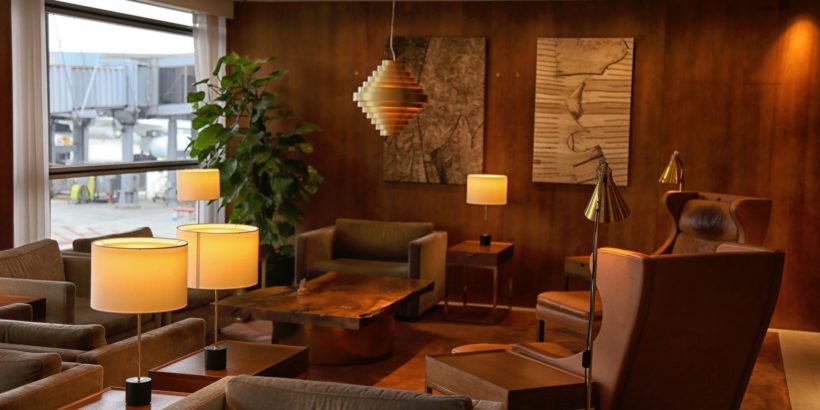 We arrived at HKG for our short first class flight from Hong Kong to Bangkok on board the Cathay Pacific 777 about four hours early so we’d have plenty of time check out the Pier and also check out the new Amex Centurion Lounge at HKG (a review on that will come later).

Cathay Pacific had a dedicated first class check-in area which was completely empty when we arrived. Within seconds of arriving the staff helped us with our luggage and we were pointed to the direction of The Pier. The Pier is open from 5:30 am to 12:30am and is located on level 6 in Terminal 1, near Gate 63.

There was a helpful map near check-in that I took a photo of to help us find our way through the terminal. I honestly found it very easy to navigate Terminal 1 without the aid of a map but it always helps to have one just in case. I believe we could have walked to the other end of the terminal but the train was near us and we decided to just take it to the near gate 60 since that’d put us very close to The Pier. (The other first class lounge, The Wing, was very close to us at check-in.)

The first step was to go down a level and take a train over to near gate 60. The train, known as the “APM” (Automated People Mover), was very efficient and even though we’d just missed one, the next train came through very quickly.

Since this was only a couple of days after Chinese New Year, the airport and everywhere else was decked out with Chinese New Year symbols and decor which was pretty cool to see.

After getting off the train, we made our way toward the lounge and in the process passed up the Amex Centurion Lounge, which we would be returning to later on.

After making our way down the escalator, we approached the check-in desk who promptly admitted us into the lounge. I found it odd that they didn’t ask us if we needed/wanted a quick overview of the lounge since most other airlines have offered that when entering a large flagship lounge containing numerous services and features.

Once we entered the Pier, the first thing that struck me was how elegant all of the corridors and furniture were. I could immediately sense that this was going to be a very high quality lounge just by the look and feel of the seating and decor found throughout the lounge. The entire place has a very distinct ambiance with some serious feng shui.

We first checked out the bar area, which was very impressive in terms of appearance.  Rather than being stuck at the end of the lounge, it sits in the middle of a large room, acting as a beautiful centerpiece to the room that’s well suited for socializing.The green onyx walls and walnut wood panels create a relaxing yet elegant feel to the area that you also find in other sections of the lounge.

There was a decent selection of spirits in the bar but it was still pretty early so we didn’t partake at that time.

The bar area was also surrounded by many different comfortable seating options that are spread out in a spacious manner.

The only slight negative to the lounge at this point was that the servers at the bar area seemed stand off-ish to me. Typically at flagship first class lounges I receive a very warm welcome from the staff but I didn’t quite feel that here.

After checking out the bar, we ventured to some of the other seating areas within the lounge which were just as elegant as the bar area. I probably put more value in the ambiance factor of airport lounges than others, but I think most people would still have to agree that The Pier nailed the relaxing concept they were shooting for when designing and building this lounge.

After checking out the bar and other seating areas, we decided to explore The Pier day suites, which are located adjacent to the spa. Only two of them were open which was perfect for us two, and they put me in the suite at the very end.

After they checked us in, we were led down a hallway and into the day suite corridors which are sectioned off with curtains from the hallway.

The curtains do a great job of dulling out any noises but the corridor is so quiet you can hear a pin drop.

The day suites are perfect if you’re looking for a place to nap/relax for around 1.5 hours, but they ask that you limit your time in them to 1.5 hours, so “day suite” is a bit misleading. When I think “day suite” I think an area to rest for a hand full of hours on a long layover but I don’t think that’s the case here.

Inside the suite, there’s a comfortable bench/bed best suited for one person.

The suites have views of the tarmac though my view was largely obstructed by a giant column, which you can see in the photos above. So try to avoid the very last suite if you want better views. Still, I was still able to see out a bit.

These day suites are very quiet. So if you’re not there to sleep, you might not like the utter quietness of the area. After about 15 minutes of relaxing, I was ready to move on toward another area of the lounge since I had no plans of sleeping and it was just too still and quiet in there for me.

After the day suites, we moved on to the The Pier dining area. The dining area is pretty spacious with plenty of restaurant/diner style tables set up and a long bar.

The dining area was pretty empty when we arrived but after about 45 minutes to an hour, it picked up a lot and many of the tables filled up. We had to flag down a server in order to get a menu which again was something I found odd since servers at these flagship lounges are usually overly attentive and there were only like two other people in the dining area at the time.

We caught the dining area between breakfast and lunch so we were actually able to try out both.

For breakfast we split the Eggs Royale, which were good but we weren’t big fans of the sauce on the side which was a bit too heavy/thick.

About a half hour later we were given the lunch menu.

We started with appetizers including the Wonton with Noodles in soup. This soup had a distinct fishy taste to it that I think is common in “real” Chinese dishes (not American-Chinese) so that took some adjusting to get used to it but I ended up enjoying it.

The other starter we tried was the sesame chicken. I loved this dish but my mouth got hit with that strong tingly sensation which I attributed to Sichuan since I don’t think I have any food allergies to sesame seeds. Nevertheless, this was my favorite dish I tried at The Pier.

They then served us the main courses which consisted of beef cheek and spiced pork jowl. These dishes were satisfying but didn’t blow us away.

And finally, we finished up lunch with a couple of glasses of champagne.

Overall, the dining experience was solid at The Pier even though the service was a bit sluggish and I wasn’t crazy about the menu options.

The Pier has a spa but we didn’t try it out on this visit. I know that you can receive a 10 minute complimentary foot massage but I’m not a big spa person and so I just didn’t give it a try.

The bathrooms at The Pier are very nice. They are super clean with beautiful countertops and lighting.

In addition to the dining area, there’s also a snack are called The Pantry. This is a small room with a table full of snack items like sandwiches, breads, pastries, and other small snacks along with drinks. Although I didn’t try anything from The Pantry, most of the items looked very fresh and tasty.

There was a good selection of different sodas along with jars full of random treats and desserts like red bean pudding, mango mousse, and fruit salads.

If you’re limited on time, I think The Pantry could offer you some solid snack/food choices but I’d try to set aside enough time to try out the dining experience given the quality of the menu items they are willing to serve.

There’s another small section of the lounge known as The Library which comes with an array of popular magazines, newspapers, and some random books. It’s a bit more expansive than an ordinary literature section at an airport lounge but I’m not sure I’d call it a “library” if I were asked to name it.

Final word on The Pier

The Pier is one of the most elegant airport lounges that I’ve visited. Beyond the great ambiance of the lounge, it has some solid features like a great bar area, comfy and elegant seating areas, solid dining, and relaxing day suites. I may have just caught it on an off day but the service was definitely lacking compared to other flagship lounges which I found to be more attentive and inviting. Still, The Pier is a lounge that is worth going out of your way to experience if you have access and I would gladly return.