Greece is not only known for its spectacularly beautiful islands but also for the culture and traditions of yestercentury. Even outside of the islands you can find some of the most beautiful landscapes in the northern part of Greece. Plus, it’s also one of my favorite countries for food where savory and sweets are all enjoyable.

In this comprehensive article, I will cover the best time of the year to visit Greece factoring in things the climate, weather, temperatures, beaches, and special events that take place throughout the year.

When is the best time of the year to visit Greece?

If you wish to experience Greece to the fullest, where all the islands are accessible, the best time of the year to visit Greece is April to mid-June and September to mid-October. During those months the weather is mild with long days and islands shouldn’t be too crowded.

For the best weather, you will find May to October having the sunniest days. July and August will be the hottest months, along with being the most crowded months. I personally don’t like crowded places and would avoid July and August since it is the summer holiday for many countries.

Best time to visit Greece on a budget

For the money-conscious travelers, you will find that months like March, April, May, October, and November offer decent weather with cheaper flights and accommodation.

In fact, I went late-February and was amazed by how cheap accommodation was in Athens. Coco-Mat Hotel, Herodion Hotel, Andronis Athens (which I stayed in before), Plaka Hotel, and Athens Mansion Luxury Suites all were offering around $100 nightly rates.

When I stayed in Andronis Athens in February, I found it a great location for an awesome price of $105 a night. Located in south-eastern Europe, Greece is part of the Balkan Peninsula and numerous islands in the Mediterranean Sea. Greece borders Turkey, Bulgaria, North Macedonia, and Albania. As you can see below, here is a map of Greece via Google maps. 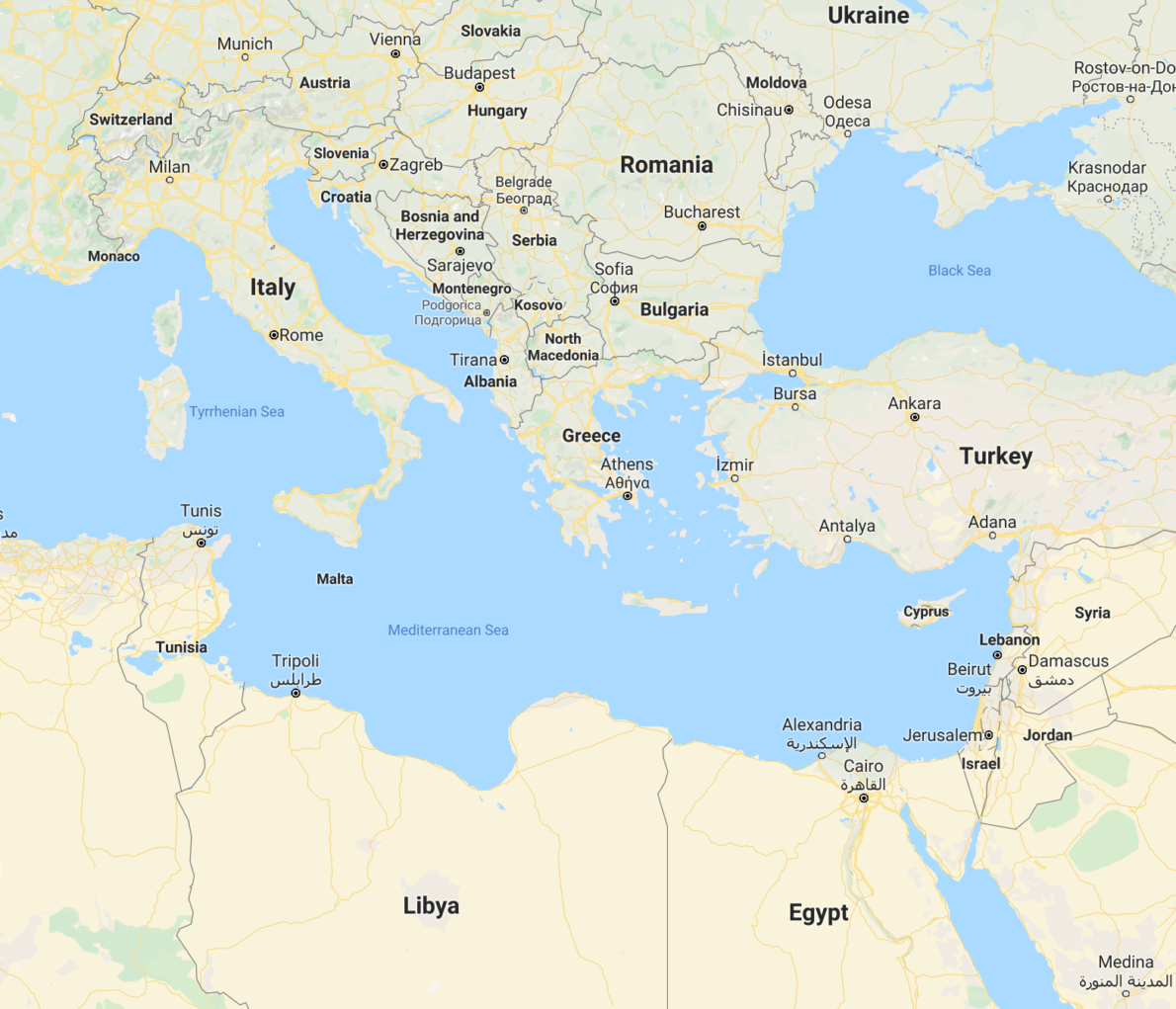 Greece is, in fact, part of the European Union, where travel between other Schengen states will feel like a domestic flight within a country.

Driving in and out of Greece is possible with a car or a bus. So, you could rent a car in France and drive to and within Greece with that same car, just make sure you have the proper permit and insurance for driving.

Greece has a Mediterranean climate, best defined as warm and dry in the summers and mild and rainy in the winters. Expect sunshine throughout most of the year in most areas. Even when I was there in February for a few days it was sunny every day.

There are some climate subtypes, like Attiki (Athens’ greater area) and East Greece that are more of a dry climate,  while Northern and Western Greece have generally a wet climate.

Down below I go into details about air and sea temperatures for specific cities and islands.

Traveling in Santorini is still doable during the shoulder months like November. In November you can expect the weather to be more pleasant than Ireland with an average temperature of 62.5F (17C). In fact, if you wish to see a fewer number of tourists, October or April would be doable months. It might be chilly sometimes, but still pleasant enough to enjoy the sun and beauty of the island.

The best time to swim in Santorini would be August with an average sea temperature of 77F (25C).

The average sea temperature in Mykonos during July is 75F (24C), making it the best time for beach life. It’s still not as warm as Santorini, being more north of Santorini, but it’s still known to have wonderful beaches during the summer months of June to September.

You can expect the weather between June and September to be warm enough for the beach, but the best month for the beach would be July and August as the average sea temperature is 77F (25C).

Days are filled with the sun in Santorini. During July there are 14 hours of sun with minimal rainfall during the summer months. The wettest month would be December with almost 74.5mm of rain. During the winter, expect the weather to be cloudy and wetter.

The best time to visit Santorini with sunny weather and minimal precipitation would be between late-May to mid-September.

Mykonos summers are warm, arid, and clear while the winters are long, cold, and partly cloudy. You can expect Mykonos to be windy all year-round with the sunniest days in July and August. Similar to Santorini, the best time to visit Mykonos for the best weather would be late-May to mid-September.

During the summer, expect Athens to be very sunny, but with chances of smog. That’s right, Athens is more polluted during the summer with smog wrapping the city up during peak summer months. It’s also not really windy making it a hot, stagnant city.

Being situated in the valleys of the north, Thessaloniki is sunny and hot during the summer. It’s not very windy during the summer making the high temperatures unpleasant. It doesn’t rain too much in either summer or winter, but during the winter you can expect it to be cloudier and windier.

Out of all the months, expect very little rainfall between May to September, but once it’s October, rainfall is more common, while November has an average of 20 days of rain. Compared to other islands, Corfu is the least sunny and the wettest island outside of the summer months.

If you had to visit Corfu during the winter months, a rain poncho is well recommended.

Things to do in Greece

Below, I highlighted a lot of the different things you can do throughout the year when visiting Greece.

Greeks know how to celebrate, and I mean cel-e-brate.

Expect to keep celebrating the holidays in Greece in the month of January. You have celebrations like the Feast of Saint Basil’s on New Year’s Day. Think of it like Greece’s Christmas-like celebration. It’s a day of gift-giving, feasting, card games, and Greek customs for bringing good luck for the year. You can also find Athens and many other cities having midnight fireworks.

Then halfway through the month of January, you will find Patras Carnival, Greece’s largest festival starting on January 17th, 2020. For several weeks there will be parade floats, boules (transvestite masquerades), pantomimes, and many many many parties.

February is known to be the time of culture vulture, meaning you aren’t partying on the islands, but witnessing the beauty of culture hot-spots and archeological findings. Greece is filled with many.

But, if you still want to party, Athens and Thessaloniki are still great places for nightlife where it’s year-round.

During the month of February, you will find many carnivals called Apokries. Apokries are hosted throughout Greece in various cities where it’s flamboyant with lots of dancing and feasting. Think of this as the crescendo from Greece’s largest festival, Patras, that started back in January.

March is the month that tourists start to come in droves from all around the world, as the weather is much better. So, the parties are settling down.

However, with the weather getting better, marathons are becoming more prominent. If you are a marathon lover, you shouldn’t be disappointed with these two marathons:

In April, expect even warmer weather where summer activities like fireworks become more frequent. Rocket War, Chios is a once a year celebration on the night between Saturday and Sunday of Easter. This is a battle between the people of Saint Mark Church and the people of Virgin Erethianis Church.

It’s located in Chios and starts around 8pm where thousands of fireworks between the churches light up the sky in an all-out battle.

The islands become the life of the party starting in June with Hippocratia Festival for a summer-long series of events on Kos.

Its music festivals, theater, and art exhibitions throughout Kos where the culture comes alive. Think of it as the time of connecting with other like-minded people that value the arts.

While it might be the hottest month out of the year, festivals are still very much alive in the month of July.

You will find festivals like the Hydra Puppet Festival, where it’s a tradition of local and Greek puppeteers presenting new and old performances on the island of Hydra. Then on other islands, like Kavala, you will find the second oldest festival in Greece called Philippi Festival performing ancient theater. These two festival performances highlight the Greek arts like no other.

If performances aren’t your thing, Halkidiki holds an art festival called Sani Festival. It’s meant to connect locals with foreign artists showing off their latest creations. You will find professionals to unknown artists all in one place sharing their works.

The arts just keep on coming with the Athens International Film Festival showcasing Sundance like films for 12 days. You will find many foreign films from all around the world, some premiering at the film festival.

However, if film or music isn’t your thing, the Armata Festival is where local boatbuilders all come together to build a Turkish Boat that is from the battle of the strait between Spetses Islan and Kosta during the revolution of 1821. Once the boat is done, the festival has local dances and theater. Then there is a grand finale of fireworks. You will also find local boats making their way out to the middle of the sea all candlelit. It’s truly special.

Every October during the last week there will be a Chestnut Festival marking the new harvest in the Macedonian forests. For three days you can join locals in mountainous villages savoring winter fruit with a glass of tsipouro (local spirit) or wine.

At the beginning of October, Santorini has one of the biggest sporting events called the Santorini Experience. Trekking, swimming, climbing marathon throughout all of Santorini, it’s a marathon for the best of the best. I am for sure not one of the best, so I won’t even attempt it.

While it might be getting cold, the holidays don’t stop Greece. You can find many Christmas markets throughout Greece, but once Christmas hits, it’s a time to celebrate with family. After Christmas passes New Year’s Eve comes around where the festivities all start up again with huge New Year’s celebrations all throughout the night and the following day.

As you can tell, there are pros and cons to visiting Greece each time of the year. Personally, I would shoot for September as the sea temperatures should still be warm enough for some beach life, but also less crowded than June to August.

However, visiting during other times of the year, like October, could hold for some interesting events in the Macedonian forests.