The Eurostar is one of the most popular ways to get from London to Paris. We recently took a short journey from London St Pancras Int’l to Paris Gare du Nord in Standard Premier, and I decided to share a short review of that experience.

Interested in finding out the hottest travel credit cards for this month? Click here to check them out!

We finished up a one night stay at the Marriott Renaissance St. Pancras in London. This was one of my favorite historic hotels that I have stayed at. It is truly a beautiful property and has a very historic feel to it all through its charming corridors.

One of the major highlights of the property is the Chamber’s Club Lounge which is available for Marriott Platinum members or if you are staying in suites the Chamber’s Wing. The lounge offers a great breakfast buffet and also has some other options that you can order off the menu.

One of the other cool features about the Is that the hotel has VIP Eurostar access. Staying in The Chambers Rooms and Suites get Eurostar VIP transfer, which means you’ll be escorted through security and to your train without having to worry about lugging your bags around.

Since we were in the middle of our around the world trip with tons of luggage, this VIP transfer service was very convenient. A staff member from the hotel ushered us through the hotel and into the train station. We were able to get through the priority security line which was much shorter than the line opened up to the public. Once we made our way through security we were looking for where we needed to go to board our train.

However, because of all of the snow and icy weather our train was delayed for another hour. So we just sat down in the open lobby and awaited for our train to depart. The lobby filled up to the brim and there were people everywhere so it was a bit of an uncomfortable wait.

There is a lounge at the train station and it is accessible to American Express Platinum cardholders. Platinum card members get access but they cannot bring in a guest with them, and I am not sure if you can pay to have guest access.

Normally, I would have just entered the lounge to check it out and perhaps do a review, but I had forgotten my wallet in a rental car back in Auckland, New Zealand a week earlier and I was still waiting to work things out with Avis so at the time we did not have a Platinum Card with us.

After waiting for close to an hour, they finally opened up the gates for boarding. We made our way up an escalator to the platform where our train was.

We were in cabin one and had booked Standard Premier tickets. On the Eurostar there are three different classes:

We wanted a extra bit of comfort but the Business Premier prices were significantly higher. Because this was such a short train ride, it was difficult to try to justify paying several hundred extra dollars just for a little bit of extra room and better food. So, we went with the standard Premier Tickets and I think it was a great choice.

The difference between Standard and Standard Premier is that you get extra room and you also get a complimentary light meal with Standard Premier. Business Premier will offer you additional perks like a hot meal, champagne, and it also allows you to have lounge access. In addition, they allow you to bring on one more bag of luggage. 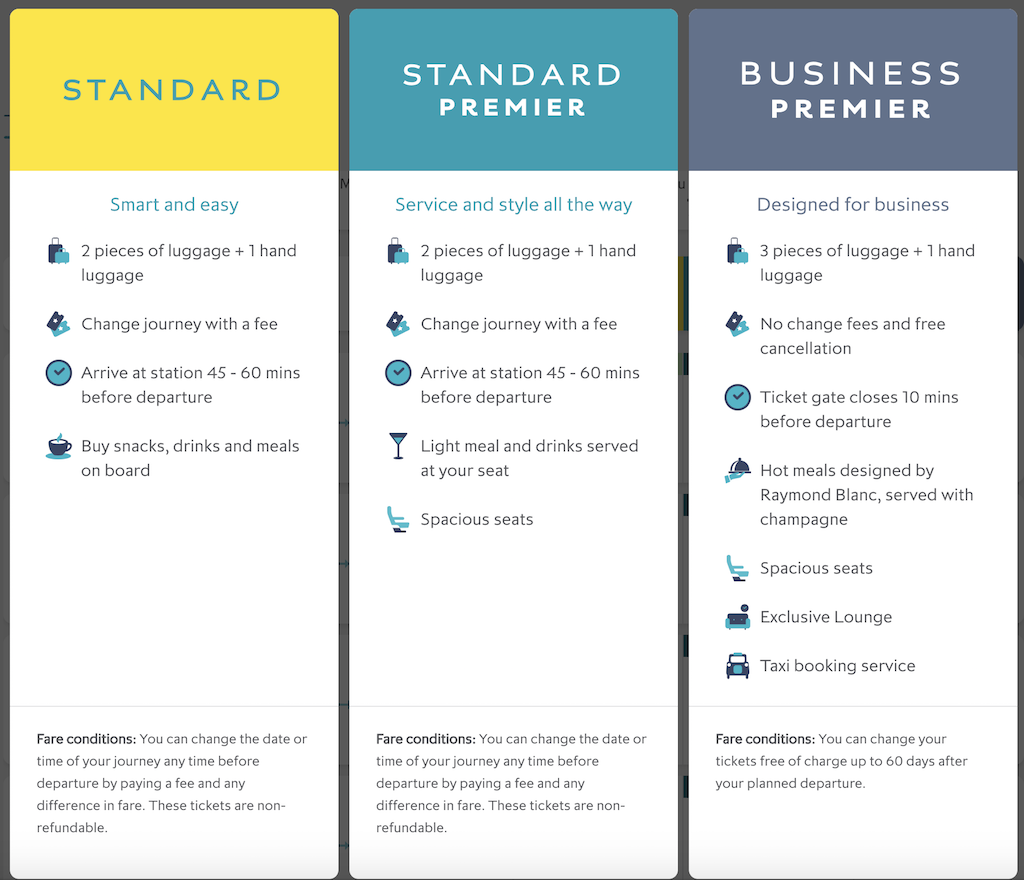 One thing that is slightly annoying about the Eurostar seat selection is that you have to wait until after you book to pick your seat. There are a few different types of seat maps that you might be riding with. You can click here to see the different versions. I believe that we were riding on the E320.

Initially, we had booked seats where Brad and I would be sitting directly across from each other with no other passengers on either side of us (the seats seen below). To me, these are great seats that offer you a decent amount of privacy, and I was pretty happy to have gotten those seats.

However, our original train was canceled due to the snow and when we rebooked, we were not allowed to select our seats and we were just stuck with what we were given.

As an aside, I must say that the rebooking process with Eurostar was absolutely excruciating. I was on hold with them for approximately 2 hours and 45 minutes. I had tried to do everything online but was not able to because the website was glitching and the chat service was not able to do anything for me either.

But, I was still just happy to get a train so that we could get over to Paris in time. Also, I have to give them some props because they offered us a partial refund due to the delay. The train ride from London to Paris is about 2 1/2 hours.

As soon as we boarded, we loaded up our luggage which consisted of four bags in took up the entire luggage rack.

Sharing a table with a couple of strangers directly in front of your face for 2 1/2 and a little bit odd which is why I had originally booked us the other seats but the people were pretty nice and it was not a big issue. Also, you can pull out the table so that you have a little bit more room.

A little bit after we departed, the staff came around and served us our meals for the ride, which were not my favorite. We were given some type of cold quiche dish that I took about one bite of and then was pretty much finished with it. There was also a piece of bread and salad which wasn’t bad and then some sort of weird jelly desert type dish.

Overall, the train ride went by very quickly and before I knew it we were arriving in Paris. We would then spend tonight at the Park Hyatt Paris Vendome, which ended up being a pretty interesting experience.

I would definitely consider taking the Eurostar again and I think that booking Standard Premier would be a good idea. On a longer train ride, I think it might be worth it to look into the business class cabin for the better meals and potentially better drink offerings but I just don’t think it would be necessary on such a short ride.

I think that the Eurostar is a great way to get from London to Paris or vice versa. I would suggest to make your booking well in advance so that you can avoid the high price spikes. Also if you are riding Standard Premier, then try to select your seats as quickly as possible after booking and go for the seats that offer the most privacy if possible.