Brad and I recently had some great food on our weekend trip to Amsterdam. While we didn’t really focus on finding any fine Dutch cuisine we did come across some of the great snack food that Amsterdam is known for. In addition, we found a couple of street food joints you may want to hit up if you’re looking for some great food on the go. Here’s a rundown of some the food we had and recommendations for places to eat.

There was no way  I could go to Amsterdam and not try bitterballen. This is basically a fried ball filled with beef, broth, and butter usually served with mustard and recommended along with a pint of beer. The bread crumbs on the outside are quite crispy and the filling on the inside is very mushy (and hot so don’t burn yourself). 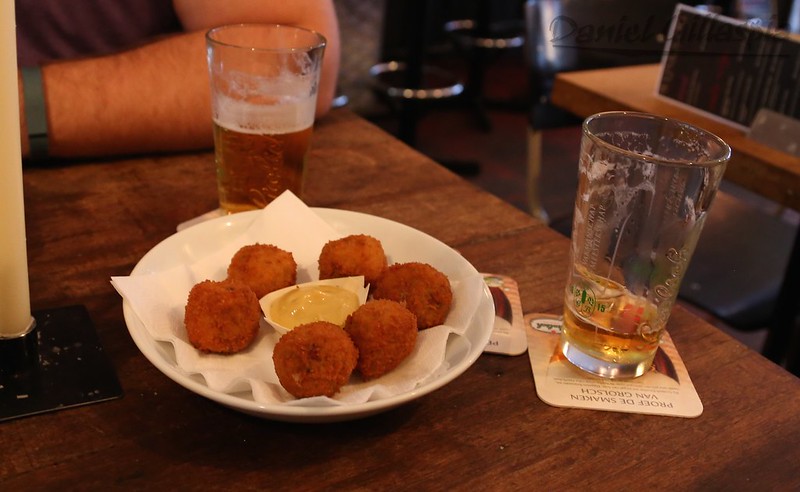 The texture took a little while to get used to as soon as I bit into it. I don’t think I’d ever tired something so crispy on the outside and yet so mushy on the inside. With a few dabs of mustard, the bitterballen had a lot of different tastes going off in my mouth. While it wasn’t my favorite food I tried in Amsterdam, it was still pretty good and I can’t wait to try different types of it some time in the future. We tried our bitterballen at Tuin 10, a nice little restaurant/pub near the Jordaan.

Another snack that I had to have in Amsterdam was stroopwaffel. Stroopowafels are basically mini-waffels made with baked batter. They are then sliced in the middle and filled with syrupy goodness. Some even have a little bit of sugar sprinkled on top. We tried caramel-coffee and a honey flavored stroopwafels. 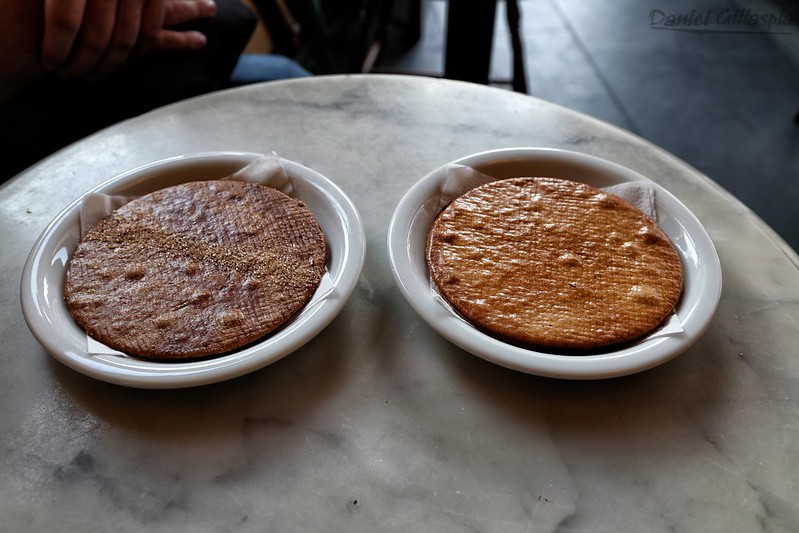 I was once again a bit surprised with the gooey inside of these snacks. Only this time, I enjoyed it a little bit more. It’s got a crunch to it like a normal cookie but the syrup together with the additional sugars on the stroopwafel make for a much sweeter experience than any ordinary cookie would. 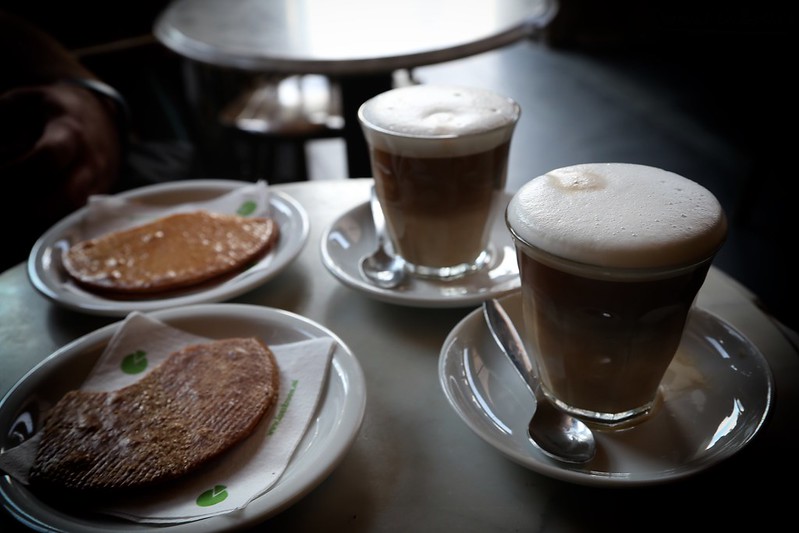 The koffie verkeerd (which is basically cafe latte) was great, too. It paired amazingly well with the stroopwafel. I don’t know if it’s a Dutch thing or not but one interesting thing was that the coffee was served in a glass with no handle. I tried to drink it despite the heat but eventually just had to wait for the glass to cool down.

The bakery where we experienced these sweet memories was Lanskroon, located in the south west of the Red Light District. It’s a small bakery but they have a great staff and a amazing selection of pastries to choose from.

Patat is basically just the Dutch word for French fries. The only real difference is that they come in larger strips and are usually accompanied with some sort of sauce like mayonnaise or ketchup. You will see Patat places everywhere along the main roads it’s really a grab and go type of food. They usually serve them to you in a little paper cone with a small plastic spear. 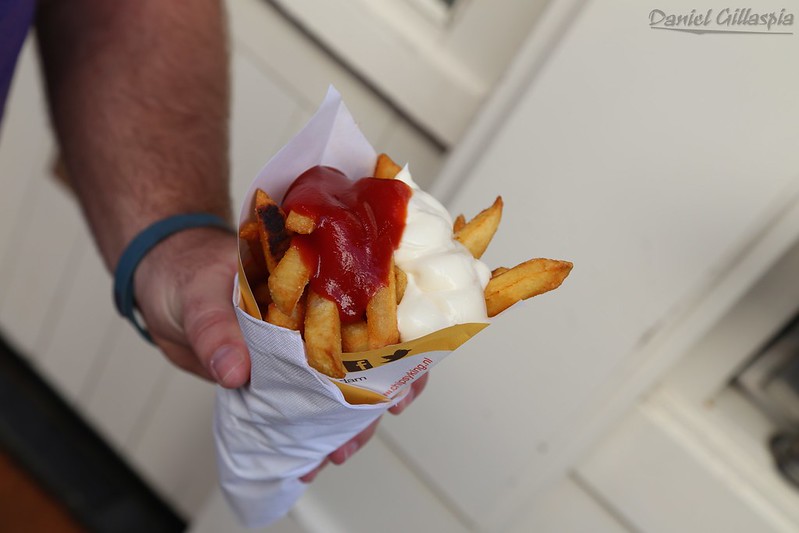 We tried two different kinds. The first was with ketchup and mayonnaise. Obviously ketchup is a pretty standard American sauce for fries but the mayo was definitely something different. It wasn’t bad, either. We also tried sweet chili sauce with the patat and it was pretty tasty as well. This is a great option if you are just in the mood for a quick snack and are in the midst of your wanderings throughout the city. I recommend Chipsy King but like I said there are several all around the city.

I wasn’t sure what to expect with regards to breakfast food like crepes and waffles. With Holland being so close to Belgium and France I figured that we couldn’t go wrong with either of these in Amsterdam. We ordered both crepes and waffles at a place called “Crepes and Waffles” on Warmoesstraat street near the Damrak. 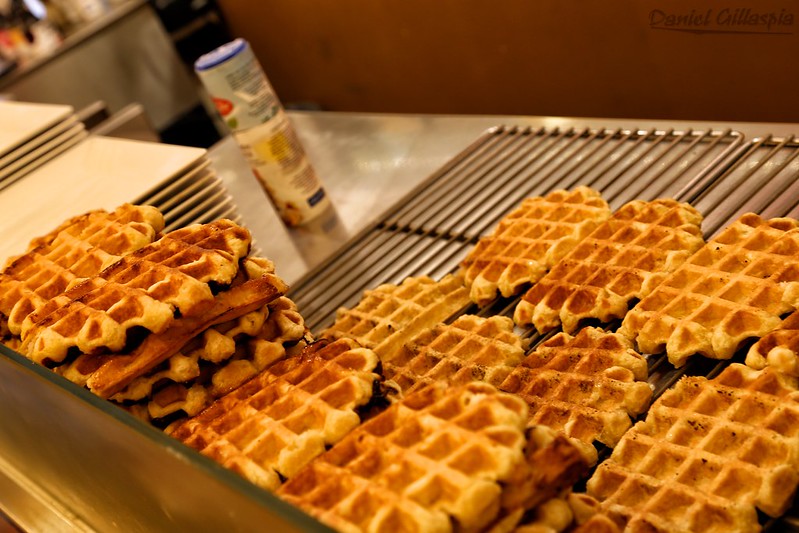 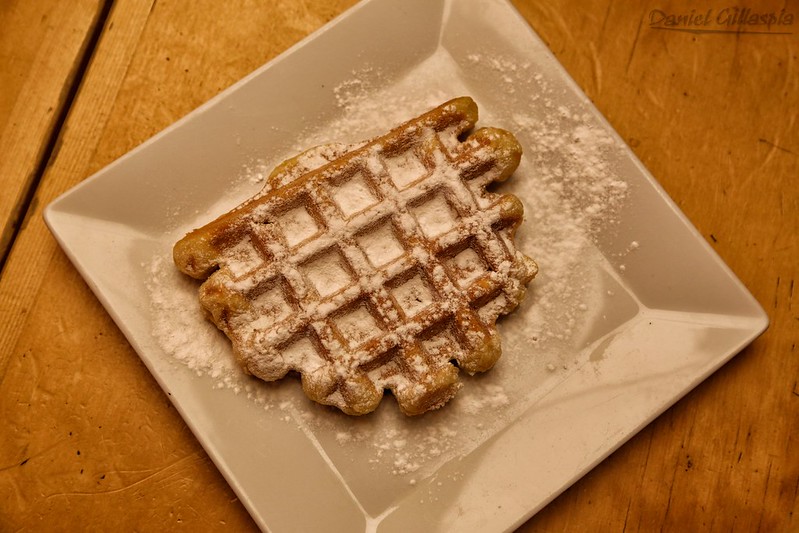 We ordered one waffle with powdered sugar and two crepes: one with white chocolate and strawberries and the other with my favorite, Nutella and chocolate sauce with even more powdered sugar. (We obviously put the diet on hold for this weekend.) The waffle was amazing. Very thick and a bit dry, but still very tasty. The crepes were good but got a little rubbery for our liking. The only comparison for crepes for me were the ones I had in Paris so it was perhaps a little unfair to compare the two. Still, they weren’t bad and the service and food presentation was top-notch at this place as well. 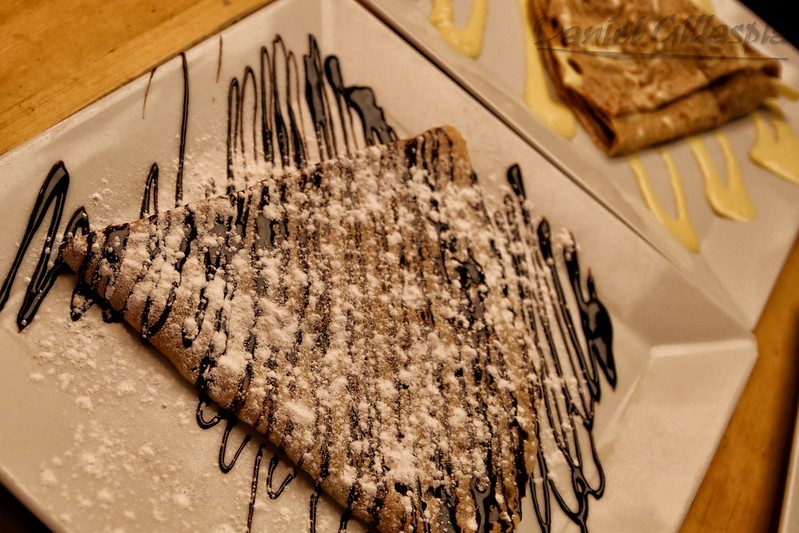 Interestingly, I later found out that the Dutch actually have their own version of the pancake called “pannenkoeken” and it’s in-between a crepe and pancake in thickness. Also, they aren’t breakfast foods and are instead eaten at other times of the day and usually with generous potions of toppings. Perhaps next time I’ll give pannenkoeken a try.

This was another tasty Dutch treat I had the privilege to try. I had struck out at a few other places asking for this because it’s usually only made around New Years. It’s basically a large fried donut hole with powdered sugar. The one I had happened to also come with raisins. Despite me not really liking raisins I thought that it was good. 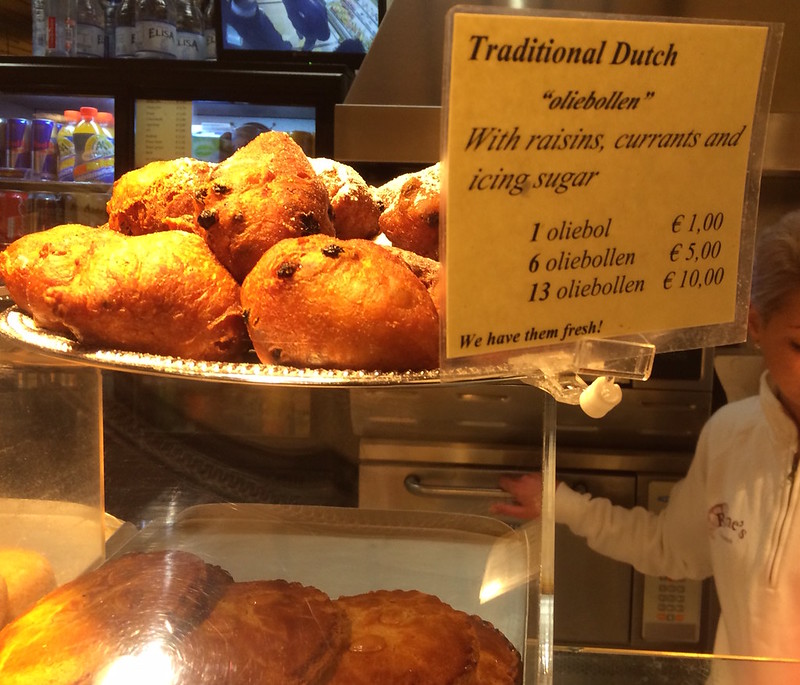 6. Chocolate covered waffles, donuts, and everything else

One thing that surprised me about Amsterdam was all of the amazing pastries you can find everywhere. There are tons of them and many are covered in thick layers of sweet chocolate or icing. I had an amazing chocolate waffle and a few other great tasting pastries. Just be prepared because the chocolate they use is very rich. Our bakery of choice was Rene’s Croissanterie and I highly recommend them… definitely stop by at least once during your visit! 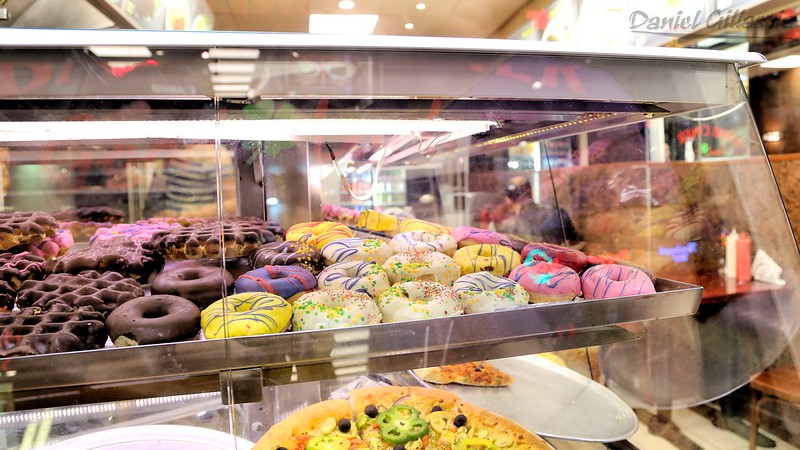 One tradition Brad and I have is trying out pizza joints everywhere we venture to. We had originally planned on getting pizza from a place on the outskirts of town but due to being short on time we just grabbed a bit nearby our hotel at New York Pizza. The pizza was great and though we weren’t able to make it to our initial pizza joint of choice, this was a solid substitute for the late night cravings you’ll probably be having in Amsterdam.

There are a number of Wok places around Amsterdam. We grabbed some amazing Chinese noodles from Wok Inn near the Damrak (not the restaurant listed far away from Amsterdam on Google Maps) and it really hit the spot with our late night cravings. They cook up your food right in front of you and are pretty fast and cheap as well. While the below photo looks a bit messy I promise you that these noodles were amazing! 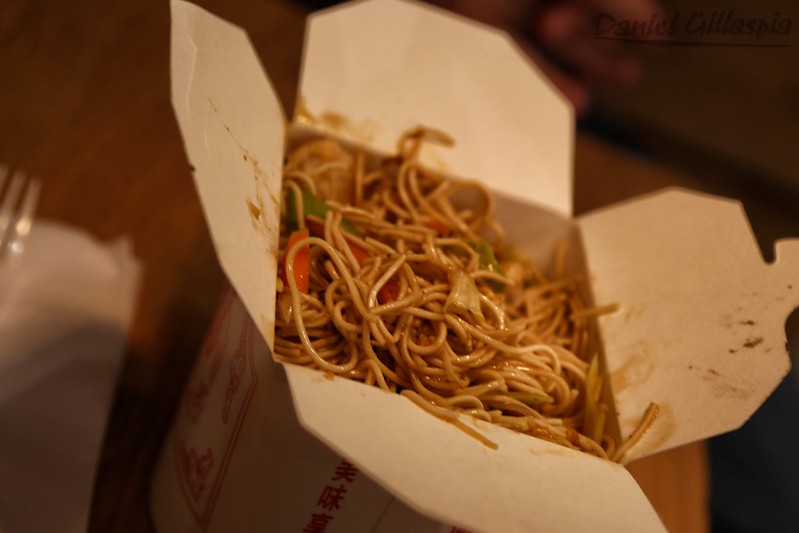 Obviously, there are real restaurants that you can choose to eat from in Amsterdam. However, there’s nothing wrong with doing a little (or lot) of snacking while you are there because there’s just so many good things to try. Hopefully, I’ll be able to return to Amsterdam soon and try out more traditionally Dutch foods but for now know that these are some great options!