It’s your first time to NYC and you’re looking for some advice on what to see and do… my recommendation: just bite the bullet on this first trip and be “okay” with being a tourist for a week (or at least a couple days). NYC simply offers too many good tourist attractions to not partake in them at least for some of your time there.  With that in mind, here are 10 top tourist attractions to consider on your first trip out to New York City.

1. Catch an amazing view of Manhattan from up high

Nowadays you have three great options for obtaining the perfect view of the New York City Skyline: top of the Rock, top of the Empire State Building, or the new viewing platform at WTC One.  I haven’t checked out the WTC One view but I have checked out the views from the ESB and top of the Rock. I recommend the the Rock as I found it more photogenic for the simple reason that you can photograph the ESB.  However, if you’re more into bragging rights or bucket-list type attractions, going to the top of the Empire State Building is a pretty cool experience as well.  It costs an extra $15 to go from the 86th floor to the 102nd floor to get inside the spire of the ESB but the crowds are usually thinner up top and it’s really cool to see photos of the ESB and think back to a time when you were hanging out inside its massive spire.

Tickets for these experiences range from about $30-$70 depending on things like express packages. Skipping the line may be worth it as sometimes the crowds can get pretty ridiculous. We actually visited the Empire State Building on a rainy late afternoon and because of the weather, the crowds were non-existent. By the time we got up to the top, the rain had cleared out but low-lying clouds were still hovering through the city and it made for some great photographs.  If you’re wanting to see the city during the day but also catch the amazing night skyline, the Top of the Rock offers an option for you to visit the observation deck during both the day and later on during the night. I highly recommend night time visit because the view of the city lights is stunning.

Central Park is pretty massive and while it’s a great place to go for a stroll, it’s also a perfect place to go for a bike ride.  Look for vendors near the main entrances of the park. Prices for bike rentals start at about $15 an hour and go up a few bucks for each additional 30 min or hour.  It was a lot of fun riding around the park but we definitely had to bob and weave through a lot of people so just keep an eye out for other tourists and locals. Also, another great option in addition to cycling is to rent a boat and go for a paddle through Central Park. Boats also start out at about $15 per hour with usually an extra $3 charge for each additional 30 minutes.

The tickets can be a little pricey, depending on the show and your desired seats but this one is pretty much a given for most tourists that come to NYC, especially for the first time. I’ve only seen a few Broadway shows to date, but I highly recommend The Lion King to anyone that’s not seen it or ever been to a Broadway show. Tickets can be bought on sites like Ticketmaster.com but some recommend purchasing tickets the day-of so to save up to 50% or more off the price.  While you’ll usually save money buying last minute tickets, keep in mind that seat availability will often be limited and you might get stuck with some less desirable seats for your show. Expect to spend anywhere from $100-200 if going through a site like Ticketmaster.

As a interesting side note, my room mate from law school (in California) just happened to be in the same exact showing of the Lion King when we saw it… pretty crazy considering we no so much as mentioned to each other that we’d be in NYC that week.

The Metropolitan Museum of Art (known as the Met) and the Museum of Modern Art (known as MoMA), are two of top museums you’ve got to check out on your first visit to NYC.  The Met is the largest art museum in the US and one of the top 10 in the world. MOMA is of course home to Vincent van Gogh’s, The Starry Night, among many other famous and inspirational works.

Take a ferry to the Statue of Liberty and check out the most iconic statue in the world up close and personal. Gifted to the US by the French in the late 1800s, the statue represents Libertas, the Roman goddess of freedom, and is the ultimate symbol of freedom if you ask me. It costs $18-21 to get over to the statue depending on whether or not you want to inside of it up to the crown. Also, the tours usually stop by Ellis Island, where you can see where tens of thousands of immigrants first arrived in New York after being greeted by the Statue of Liberty. 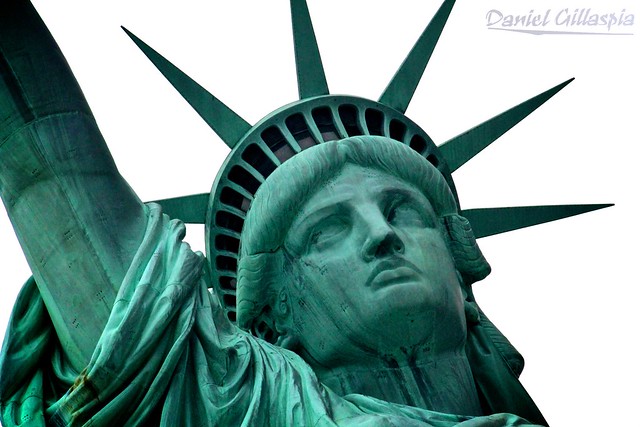 So these may not exactly be touristy, but you shouldn’t pass them up! The food carts are what kept me out of many restaurants in NYC. We found these all over the city and had amazing food of all different ethnicities. Whether you want Mexican, Mediterranean, hot dogs, burgers, sweets, whatever… if you look hard enough, you’ll find them. I wish I had thought more about it before my trip and I would’ve researched more places to check out but I can honestly say that all of the places that we stopped by on a whim were excellent. So my suggestion: research the top food stands and trucks nearby where you’re staying so you’ll have a couple of go-to places in case you can’t decide on where to eat.

This was one of my favorite things to see in NYC.  It gave me goosebumps to see those two empty square holes in the ground where the Twin Towers once stood. It was definitely moving and now there’s a museum to check out on site where you can learn more about the victims, their families, and the heroic efforts of first-responders on that day. They also have massive beams and parts to the Towers on display that are warped from the extreme pressure and heat they endured and they are very moving to see. Regardless of what state or country you’re coming from, I highly recommend a stop to the memorial site for everyone.

Tickets to the museum and memorial are $24.

8. Walking through the city

There are plenty of places and neighborhoods  to see on foot around Manhattan.  I enjoyed checking out the Flatiron building, strolling through the Greenwich Village and popping in and out of a few pubs, exploring Little Italy and Wall Street, and even enjoyed experiencing the madness of Times Square.  There are great photo opportunities at just about every corner so have your camera ready at all times.

One walk I recommend is the walk across the historic Brooklyn Bridge.   It’s easy to overlook the Brooklyn Bridge with all of the other things to see but don’t forget this was once the longest suspension bridge in the world and was also considered to be the 8th wonder of the world for a while.  It was pretty packed when we made the walk and there were plenty of cyclists on the path so it was a bit crowded but I still enjoyed the walk and the views of the city are great, too.

Of course, you never know who you might run into in NYC. Here’s a photo of people going into a frenzy when Ricky Martin showed up around Times Square.

9. Taking a ferry tour around the city

Taking a ferry boat tour around Manhattan gave me a better appreciation for the massiveness of the New York skyline and all of it’s great bridges that I wouldn’t have gotten by just walking around. Not only will you get amazing photo opportunities but it’s also just a great way to relax, maybe have a couple of beers, and catch the sights of this amazing city.  I think the only view that probably beats this would be booking a helicopter tour, which is something I would have definitely looked into had it came across my mind.

You either hate them or love them, but you can’t deny the legacy behind the New York Yankees.  While the old Yankee Stadium is long gone the new state-of-the-art stadium costed $2.3 billion to construct! It’s a great stadium and even for non-MLB fans it’s a bucket-list type experience, especially if you can catch them when the Red Sox are in town. 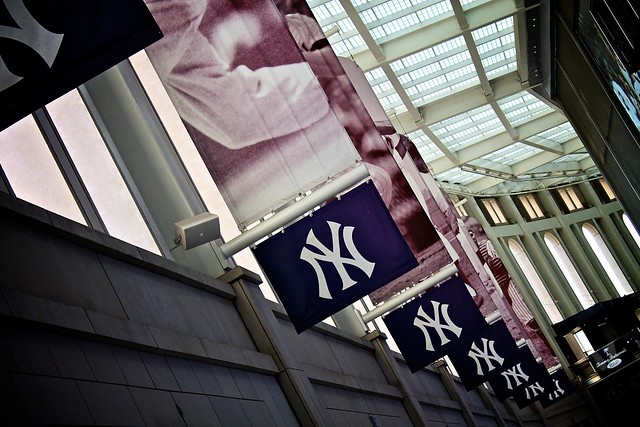 One last thing, if you’re going to be visiting a lot of these places then you may want to look into the City Pass which will save you some change on your admission to many of these places and also allow you to skip the lines at some of the attractions.

Obviously, New York City is a special place that offers visitors endless attractions beyond these major tourists attractions.  However, if it’s your first time in the Big Apple, you owe it to yourself to at least check out about half of the things on this list.