Right now, American Express is offering a fantastic sign-up bonus of 75,000 Membership Rewards when you spend $3,000 within the first three months of opening up the Mercedes-Benz Platinum Card® from American Express. This is a great bonus but many might wonder if they should jump on it. Here are some things to consider before applying for the card.

You don’t have to own or lease a Mercedes-Benz

In order to be eligible to apply for the card, you don’t have to own or be leasing a Mercedes-Benz vehicle. The card specifically states that the card is “designed exclusively for Mercedes-Benz drivers and enthusiasts.” So become enthused and you’re ready to apply.

When it comes to earning Membership Rewards, the Platinum Cards from American Express and the Premier Rewards Gold Card (in addition to their business card counterparts) are the best ways to earn these points.

American Express has a ton of different offers that come around. Some are public while many others are mostly targeted offers received vial mail, magazine subscriptions, etc. The offers have many different minimum spend requirements and bonuses, so it’d be very difficult to map all of them out. But just to give you an idea on what kind of offers can be available, here’s a breakdown of both publicly available offers and some of the targeted offers I’ve come across.

The bolded offers are the standard public offers.

As you can see, the 75,000 sign-up bonus for $3,000 is one of the better offers that you can get from American Express. So from a comparative standpoint, it definitely makes sense to consider applying for this offer.

The benefits are the same

The fact that the key benefits are the same means that if you don’t already have a Platinum Card, it’s definitely a great time to jump aboard the Platinum card train to take advantage of great benefits like Priority Pass, TSA Pre-Check/Global Entry, $200 airline credit, etc. Read more about the benefits for the Platinum Card® from American Express here.

What if I already have a Platinum Card? 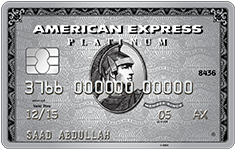 Things get a little complicated if you already have another Platinum card from American Express.

Is it worth paying the annual fee for two cards?

For one, you may wonder if it worth it with the $475 annual fee (which is not waived the first year). From a strictly value standpoint, I would gladly pay $475 for 75,000 Membership Rewards. I could easily get over $1,500 worth of value on those points on travel expenses that I ordinarily incur, so the “return on investment” works out for me… basically $1,000 worth of free travel gained on the bonus alone.

You can’t forget about the $200 airline credit, either. You’ll get that awarded as soon as you receive your card and then again after the new year. Therefore, before your annual fee is due for the second year, you could have essentially reduced your first year annual fee down to $75 (if you properly utilized your credits).

Will I be eligible for the bonus?

The second major issue about getting this card is that there is a chance that American Express will not honor the sign-up bonus! This is just a chance you’ll have to take if you want the bonus and already have a Platinum Card from American Express.

Welcome bonus offer not available to applicants who have or have had this product.

There are data points of some people being awarded multiple bonuses from the four different American Express Platinum Cards and then there are reports of others not being awarded a bonus for more than one Platinum Card. It’s hard to tell what the outcome will be and like I said, in the end, you may just have to take a chance if you really want this bonus.