I recently completed a two-week stay in Dallas and had the chance to get out on multiple occasions and explore some of the best places to view the downtown Dallas skyline. After doing a little bit of research and some experimenting of my own, here are some of the best places I found to view and photograph the downtown Dallas skyline.

(Keep in mind I’m not a local so there are likely tons of other spots you could find. Check out the links at the bottom of the article for more photo spots.

My favorite place to photograph the skyline is from the N Edgefield Ave bridge. This is a perfect spot to photograph for a few reasons. There’s parking right next to the bridge and there’s a wide sidewalk on the bridge so you have plenty of room to set up your tripod and you don’t have to worry about traffic (which is pretty minimal in any event).

See the Google Image screenshot below to see the type of room you’ll have to roam.

The view is spectacular for photographing light trails of the highway traffic in the foreground and skyline in the background. You can play around with a lot of different perspectives but I don’t think you can really go wrong with any of them. Luckily, it looks like some of the street lights are out (and have been out for a long time), so you shouldn’t have to worry about them ruining your photos.

An easy way to find this bridge is to enter “First Quality Fabricating Inc” into your GPS. Their address is:

Once you arrive to it, you’ll see N Edgefield Ave bridge right next to the shop. If you arrive in the evening, there should be plenty of open parking spots there that you can park at. I didn’t see any “no parking” signs anywhere nearby and I’d be shocked if you were to ever encounter an issue parking there.

Views from the Trinity River Spillway

There are several different points along the Trinity River Spillway to choose from. I first tried two popular spots:

While the views aren’t necessarily bad, they just weren’t quite what I was looking for. For example, below is a shot from the official overlook point at Trinity Overlook Park that is for the most part obscured by what I think is a jail. It probably doesn’t look bad at night but it’s just not the best spot to take in the entire skyline in my opinion.

However, if you walk south along the Trinity River Spillway, you will come across seemingly infinite perspectives to capture the skyline.

The map below shows paths leading south from Trinity Overlook Park. It likely depends on the season, but the condition of those paths can vary. Right now, the path called “Perimeter Road” on the top of the hill (that you’d want to take photographs from) is a path made up of two thin tire trails with waist-high weeds on either side. If there’s been rain, it will probably be muddy. Here’s a photo I got along the way as I travelled south in the red oval above:

You can follow that path in the red oval above all the way to the I-30 bridge/Tom Landry Freeway. At that point, you’ll encounter a construction zone that I believe you can pass through. There are just two issues with crossing through this way. First, the area looked very muddy when I was there so unless you have shoes you’re willing to get really dirty you may not want to cross. The second issue is that parking at the Trinity Overlook is limited to one hour and they claim violators will be towed. I have no idea if that’s enforced or not (probably not at night), but that’s something that I didn’t want to take a chance on.

The solution is to do this.

Park at Trinity Overlook Park. Then walk along the path towards the I-30 bridge/Tom Landry Freeway and get some shots that you’d like. Then head back to your car and drive over to another area (with no limit on parking) and then explore the other side of the Trinity River Spillway.

Check out the Google Map below to see where this “other area” is.

The red oval located on E Greenbriar Lane is a great place to park on the street. You don’t need a permit or anything. From there, it’s a very short walk to where “Perimeter Road” meets N Zang Blvd. There’s a small trail (located at the red arrow below) that you’ll see and you’ll need to hop over a small barrier to get on the trail. That trail will then give you some great views of the Dallas skyline as you move north along the Spillway. Here are a couple of photos I got along the way at this location:

The first photo is from my first day of scouting and shows that a clear-sky sunset looks like as it reflects off of the buildings downtown. I caught the below image at the sunset’s strongest reflection point of the evening. 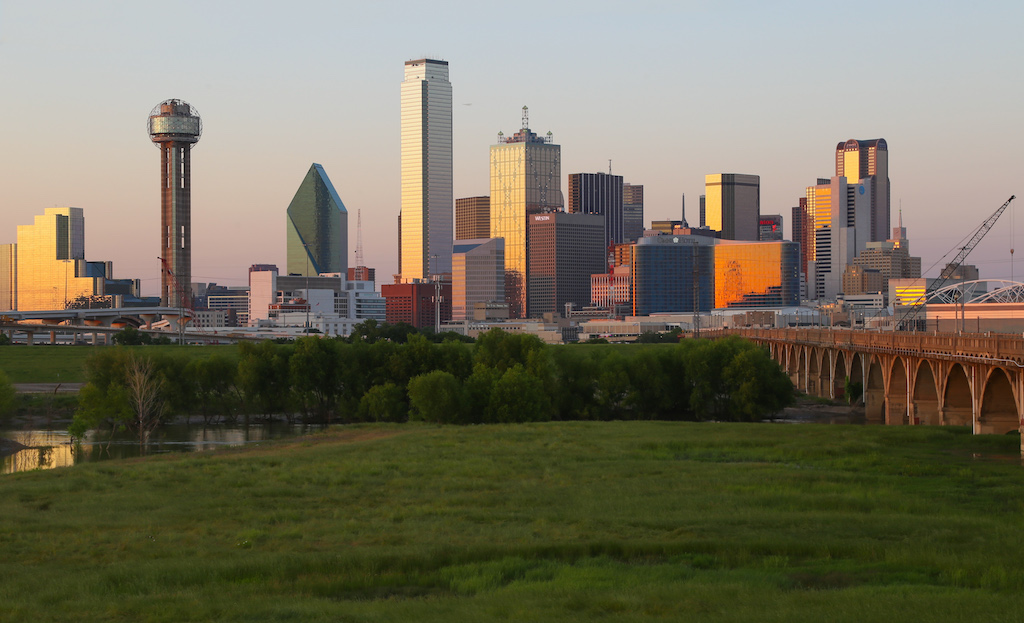 This next photo was taken probably about an hour before sunset on a different day. There are plenty of ways to play around with the foreground along the way on the trail. This photo below was taken as I approached the construction zone of the I-30 bridge/Tom Landry Freeway. Notice how the position of Reunion Tower has changed being on the far left to being back in the middle of the skyline. One thing I liked about this area of the Spillway was that it was longer and presented more options for different compositions, such as the “lake” you see below. I’m pretty sure the “lakes” are the temporal product of rainwater and output from the sewage plant, but nobody has to know that when they view your photos! After a few hours, a giant thundercloud began to develop behind the skyline. This cloud would later produce a furry of thunder and lightning and knock the power out for a lot of people. There are only two issues when photographing along these trails that I encountered: the power lines and the weeds.

The two issues go together because you’ll need to venture into the weeds on the hillside to get below the power lines (a few of the photos above had power lines removed in processing).

Thus, my suggestion is to wear pants and shoes that you wouldn’t mind to get a little dirty. While it’s not 100% necessary, you’ll find it much easier to shoot the skyline if you’re willing to get down in the weeds a little bit, below the power lines.

This spot is pretty much a given. I was tempted to not go up in Reunion Tower because I wasn’t sure how impressed I would be with the views and I was kind of let down to find out I’d have to pay like $250 just to bring a tripod up there. However, I’m really happy that I decided to make the trip even without a tripod.

As soon as the sunset begins, you’re given some beautiful shots of downtown Dallas. Sometimes the Sun’s reflection is a little too bright and will over-expose your shots but you’ll just have to try to work around it.

The views only get better as the sky darkens and blue hour produces a stunning backdrop to capture the city lights of the skyline. The bright oranges and pinks from the sunset will likely still be shimmering off the glass towers for some time after sunset, allowing for a lot of different lighting options that continue to change.

The spherical network of frames on which the lights of Reunion Tower are placed, give you ample opportunities to put unique touches on your shots. Play around with different compositions and you’ll be sure to come out with a shot of the city that hasn’t been done a million times.

I’d try to go on a Friday or Saturday during the summer, however. The reason is that the tower closes at 9pm during the week, so you won’t be able to photograph the buildings with a truly dark sky because blue hour will likely be in effect. Still, I went on a weekday and I came away very happy with the views I had so it’s not like you can really go wrong. Keep in mind that I’m not a local so I don’t know all the best parking garages and pull-out spots all over the city to take in the skyline. However, below are a few links you can check out to find out more places to view and photograph the Dallas skyline.