I don’t hear people talk about ANA (All Nippon Airways) as much as I think they should. ANA is the largest airline out of Japan and it offers some of the most valuable redemptions out of any airline to a host of different continents. It’s also very easy to rack up ANA miles with American Express, allowing travelers a pretty quick and easy option for accumulating enough miles to fly in premium cabins to wherever they want to go. So here’s a look at 8 reasons why ANA is a powerhouse airline.

ANA consistently ranks atop many of the sweet spot articles I put together, especially for business class. If you’re eyeing a trip to Europe, Asia, Australia, or pretty much anywhere and you want to be afforded the luxury of flying in business class at a reasonable rate then ANA is almost always one of the top choices.

Take a look at some of their amazing redemptions:

Europe is a perfect destination for using ANA miles because it shouldn’t be impossible to find availability on United flights and it’s a superb destination for stopovers. You’ll probably have to cough a little up for fees when you fly into places like London, Paris and other places but even when you do, those fees won’t be too bad if you’re flying with United. For example, I found roundtrip flights from Chicago to Munich with only $135 in total fees.

Only a couple of other airlines like Korean Air, JAL, etc., can compete with ANA’s ridiculously low rates to Europe.

You can use United and other Star Alliance partners to get around fuel surcharges when using ANA to book tickets to South America. For example, Houston to Rio De Janerio is only 88,000 miles in business class and the fees are only $62! Most other airlines will require 20,000 or more points for that same route.

You’ll probably have to pay some pretty hefty fuel surcharges unless you get kind of lucky when using ANA miles to get to Africa but paying fees when you only have to spend 104,000 miles is not that bad of a deal.

The rates for booking an ANA flight for only 75,000 miles roundtrip in low season in business class can come with fees as low as $86! That means with one Amex credit card and $86 in fees you could get a roundtrip business class to Japan and even stopover in Hawaii if you wanted. This is, in my opinion, one of the most valuable redemptions available. Consider that if you wanted to book a roundtrip in business class just to Hawaii with United, it would actually require more miles (80,000) than ANA requires to get to both Japan and Hawaii!

Thus, if you’re planning a trip to Japan, definitely consider this option.

I found ANA flights to Australia with less than $200 in total fees! Keep in mind that you should be able to stopover in a place like Fiji or French Polynesia for no additional expense. For 105,000 miles roundtrip that’s just ridiculous!

Another reason to love ANA is that you’re able to transfer to ANA from Membership Rewards at a 1:1 ratio. Why is this so great? Because American Express Membership Rewards offers many different cards with very generous sign-up bonuses.

That means that you could earn 125K on sign-up bonuses before ever paying an annual fee (and receiving $100 in airline credits) with the Premier Rewards Gold Card and the Business Rewards Gold Card (the annual fees are waived the first year). That’s more than enough to get to to Australia roundtrip in business class. And if you just added one more card like a Green Card (with annual fee also waived the first year), you could have 150K + Membership Rewards, enough to get two people roundtrip business class to Japan. All with just three cards. That’s amazing.

3) Star Alliance (and other partners)

ANA is a member of the Star Alliance along with United Airlines. ANA also doesn’t pass on fuel surcharges for United. This is another reason why I love ANA so much. You could book the same United flight to Europe with ANA miles instead of United miles and end up saving over 20,000 miles! And pay no fuel surcharges.

ANA also partners with a number of other airlines like Hawaiian Airlines, Virgin Atlantic, and Etihad among others.

ANA does have fuel surcharges and fees on its metal on many partners (besides United) and that’s the one drawback of the program. However, sometimes the total fees aren’t bad at all. Just take a look at the booking above to Japan on ANA — fees were only $86 and only $62 for getting to South America! Thus, while you’ll have to watch out for fees on alliance partners like Lufthansa and Brussels Airlines, it’s definitely possible to get to your destination on ANA without shelling out a lot of cash on fees and fuel surcharges.

A lot of alliance partners don’t allow you to search for award availability for other partners on their website and that’s really annoying because that means you’ll always have to call in to book and you’re not sure what that airline is seeing in terms of award availability. However, you can usually pull up a substantial amount of partner awards using ANA’s search function. And you can even search for multi-city itineraries.

The problem is that the search function can be a bit shoddy with its incessant error messages at times, although sometimes it works okay.  Hopefully, ANA will work that out some time in the future but it’s still nice to be able to have a working online search function.

You can put reservations on hold for 24 to 48 hours by calling on (although YMMV). Transfer times from Membership Rewards take 2 to 3 days so you’re kind of cutting it close with the transfer time but at least they give you the option.

One stopover is allowed on either leg so you can maximize your routing subject to other routing rules. As mentioned, one of the very popular stopovers is Hawaii while coming or going to Japan. Not only that but you can also get up to two open jaws, allowing you maximum flexibility and endless options for maximizing the value of your miles.

The only real drawback to ANA is that they don’t permit one-way awards and have somewhat restricting rules on connections, so that’s something you always have to consider.

ANA is known for having a great business class and first class product with both great food and service. It’s not uncommon to see ANA listed in the top 10 for premium cabins. They give you plenty of room and storage space in their business class cabins and also even provide you with suites on their first class product. You can’t ask for much more. 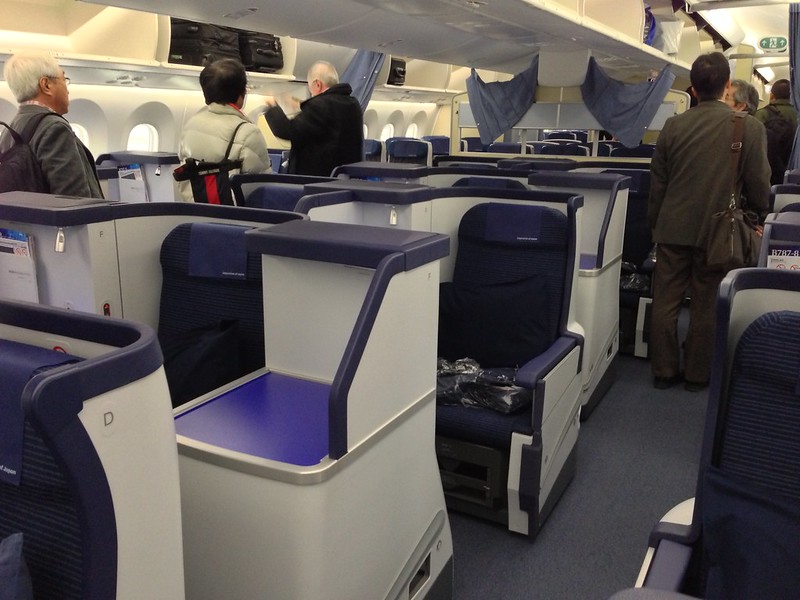 Overall, ANA is a beast of an airline. They have some of the best sweet spots out of any airline, it’s extremely easy to accumulate ANA miles with American Express credit cards, they have great booking policies, many different routes with minimal fees, and a superb product to go along with all of that. They’re definitely one of my favorite airlines, no question.