It’s getting more exciting by the minute for fans of the Singapore Suites. I previously wrote about details on the new Singapore Suites that will be on the A380. That article showed and confirmed that the Suites would likely be moved from the bottom deck of the A380 to the second deck. This was suspected because the window arrangement on the second deck had obviously changed to conform with that was on the first deck before (as seen below).

Well now more details have emerged via Australian Business Traveler. It appears that the new seat map for the A380 has been leaked and it’s showing six suites on board. This is a pretty drastic cut from the 12 Suites that you currently find on Singapore A380s.

You can see the leaked seat map below.

By the looks of the seat map, it look like Singapore Airlines is going in the same direction of Etihad and offering single aisle access with this arrangement. I personally love the single aisle look and here’s a look at what it looks like on board the Etihad Apartment. 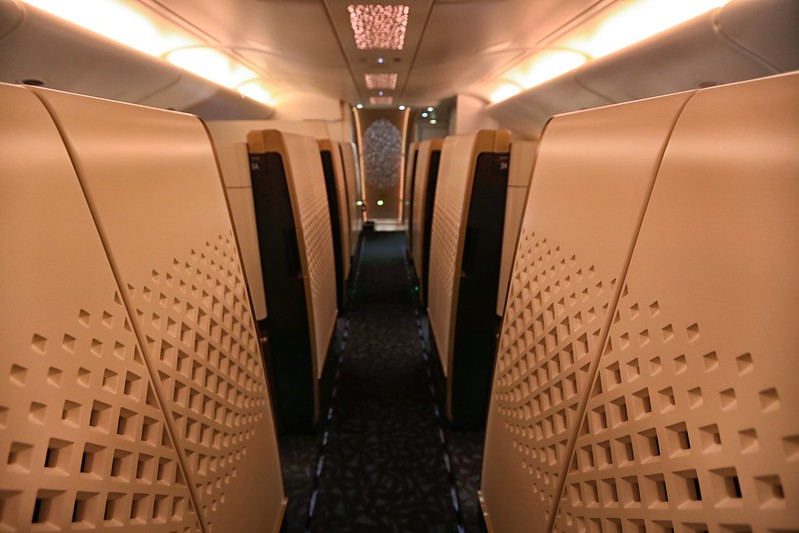 But what about the beds?

The big question here relates to the arrangement for beds.

Singapore Suites was a major game changer with its double bed that it introduced in 2008, allowing passengers in the interior cabins to put down a partition and share a double bed in the sky. To me knowledge, only China Eastern offers this oppurtunity out of all of the other major commercial airlines.

Now, you’ve got to wonder how will the new Suite arrangement alter the double bed make-up? I offered some conjecture before that Singapore Airlines might be, once again, revolutionizing the way that first class passengers catch some shut eye in the sky. I wouldn’t put it past them to offer each Suite its own gigantic bed that rivals the size of a double bed. With only six Suites, that could definitely be possible.

Another option might be for two of the Suites on either side of the aisle to share a partition that allows the bed to combine into a double bed. This would be very similar to what Etihad already offers (although it only offers “half” of a double bed since there’s a partition running down the middle.)

Personally, I think that the option for the double bed is what makes Singapore Suites so special. The “solo” Suites currently found on the A380s are still great and I spent some time checking them out on my last flight with Singapore Suites. But to me, the real draw of flying first with Singapore Airlines on the A380 is the fact that you can share this enormous bed with someone special (or have it to yourself if you don’t happen to have a suite mate).

Thus, I will be very sad to see it go.

The other major question is whether or not we’re going to see a bar on board the A380. I don’t see any indication that a bar will be on the A380 based on the seat map. If that’s the case, it’s a bit of a shame since Singapore is one of the only top first class experiences without a bar and I think that they would be able to nail that concept given their tremendous level of service and beautiful cabin interiors. I’m sure the Suites will still be able to stand on their own without a bar, but I’d just love to see one from them.

When will the new Singapore Suites be here?

Singapore is rumored to have these in the sky in October of this year and we have been expecting an official announcement on them by the end of quarter 2. It’s also rumored that initial routes will run to Sydney, which would require 75,000 miles from SIN, according to their award chart.

Overall, I think it’s very exciting to think about the possibilities for these new Suites. I’m really hoping that Singapore does something truly innovative with them and that they don’t do away with the double bed. Now that there’s only going to be six Suites, it’s eventually going to be more difficult to find award seats and with the higher award prices, I’m really hoping that the product level for Singapore Suites doesn’t disappoint.