Are you planning a visit to the Musee d’Orsay (Orsay Museum) or thinking about visiting?

This article will tell you everything you need to know about the Musee d’Orsay, including how to get tickets, beat the lines, and some interesting facts about its history and the artwork you’ll find within the museum.

If you’re just looking for tickets, then feel free to click here to go straight to tickets.

The Musee d’Orsay’s building was originally a railway station, known as Gare d’Orsay. It was constructed for the Chemin de Fer de Paris à Orléans and finished in time for the 1900 Exposition Universelle.

The Exposition Universelle was the world’s fair created to celebrate society’s achievements and it’s where many pople were introduced to things like the Ferris wheel, Russian nesting dolls, diesel engines, talking films, and escalators.

The Musee d’Orsay was designed by three architects:

The building was the terminus for the railways of southwestern France until 1939. By 1939, the station’s platforms were no longer suitable for the larger trains that were routing through the area.

So the building was used for suburban services and it became a mailing centre during World War II.

In 1970, the building was almost destroyed when permission was granted to demolish the station.

However, Jacques Duhamel, Minister for Cultural Affairs, ruled against plans to build a new hotel over the building. The station was then eventually added to a list of Historic Monuments in 1978.

When was the building turned into a museum?

The Directorate of the Museums of France suggested that the station be turned into a museum. They wanted to build a musueum that would act as a bridge between the  the Louvre and the National Museum of Modern Art at

The plan was then later accepted by Georges Pompidou and a study was commissioned in 1974.

In 1978, they held a competition for the new museum’s design. ACT Architecture, consisting of a team of three young architects, were awarded the contract which involved the creation of 220,000 square feet of new floorspace across four floors.

In 1981, the Italian architect Gae Aulenti was chosen to design the interior of the building, which included the internal arrangement, decoration, furniture and fittings of the museum.

Then, in July 1986, the museum was ready to receive its exhibits. After about six months of installing around 2,000 paintings and 600 sculptures, the museum officially opened in December 1986.

What is the Musee d’Orsay?

It is one of the premier museums in Europe and houses primarily French art dating from 1848 to 1914. You’ll find various works of art including paintings, sculptures, furniture, and photography.

It houses the largest collection of impressionist and post-Impressionist masterpieces in the world, by painters including: 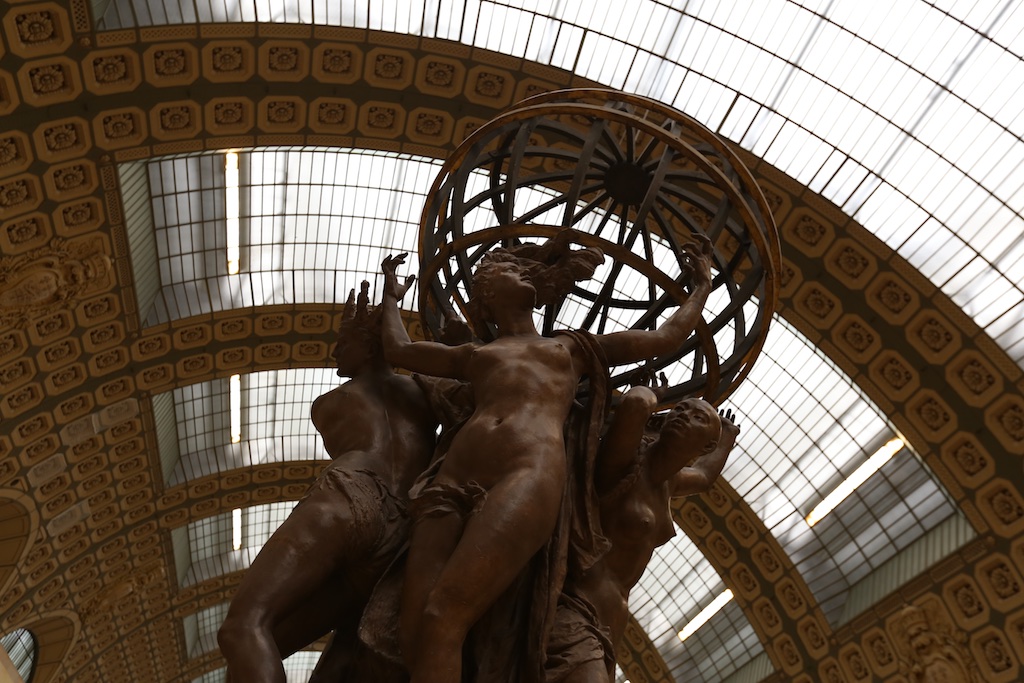 Where is the Musee d’Orsay?

The Musee d’Orsay is a museum located in Paris, France, right along the Seine River, near the Louvre.

Here is the estimated walking time to nearby attractions: The artwork arguably begins before you even enter inside the museum.

Statues outside of the Musee d’Orsay

When you first approach the Musee d’Orsay you’ll notice six statues outside the building. These were built for the 1900 Exposition Universelle and symbolize six of the seven continents. Starry Night Over the Rhone

Starry Night Over the Rhone was was painted at a spot on the bank of the Rhône that was only a one or two-minute walk from the Yellow House.

Van Gogh was a master of capturing the light of the night’s sky as well as the light reflecting from gas lamps, and this painting is almost a precursor to his more famous work that came a little later, The Starry Night.

Van Gogh painted three of his famous bedroom works which depict his famous house in Arles, Bouches-du-Rhône, France, known as the Yellow House. The door to the right opened on to the upper floor and the staircase and the door to the left led to the guest room Van Gogh prepared for Gauguin.

Many times,  Van Gogh painted self-portraits because he lacked the funding to pay for a model. Van Gogh produced over forty-three self-portraits, paintings or drawings in ten years. The self-portrait at the Musee de’Orsay is special because some art historians think that it might have been the final self-portrait painted by Van Gogh.

It’s easy to forget about the depth that went into painting these self-portraits for artists like Vincent Van Gogh.

He was once wrote to his sister:

“I am looking for a deeper likeness than that obtained by a photographer.”

And later to his brother:

“People say, and I am willing to believe it, that it is hard to know yourself. But it is not easy to paint yourself, either. The portraits painted by Rembrandt are more than a view of nature, they are more like a revelation”.

Clause Monet was a French painter, and is perhaps best known as the founder of French Impressionist painting and the most prolific practitioner of the movement.

Something interesting about Monet is that he began experiencing cataracts in the 1920s and had surgeries to remove them. But some of his paintings during this time have have a general reddish tone, which is characteristic of the vision of cataract victims.

It’s possible that after his surgery he was able to see some ultraviolet wavelengths of light normally excluded by the lens of the human eye; and this could have had an effect on colors he saw and painted.

After his surgeries, Monet actually repainted some his water lilies to make them bluer than before.

The museum has 86 of his paintings including:

Jean Désiré Gustave Courbet was a French painter who led the Realism movement in 19th-century French painting. The museum features 48 of his paintings including: The Artist’s Studio, A Burial at Ornans, Young Man Sitting, L’Origine du monde.

Pierre-Auguste Renoir, also known as Auguste Renoir, was a French artist who was a leading painter in the development of the Impressionist style, alongside Claude Monet, in the late 1860s.Renoir is known for adding a human element to his work, often working in scenes with families and well-dressed Parisians

The museum has 81 of his paintings including Bal au moulin de la Galette, Montmartre.

Eugène Henri Paul Gauguin was a French post-Impressionist artist who is recognized for his experimental use of color and Synthetist style that were distinctly different from Impressionism.  You can find 24 of his paintings including Tahitian Women on the Beach.

Tickets currently cost €12 which will get you into the the permanent collections, and for temporary exhibitions, subject to availability.

I recommend getting tickets to skip the line at a dedicated entrance. You can easily order your tickets and save them to your smartphone so that you don’t have to worry about printing anything out if you go with the tickets below:

You can hire audio guides for €5 per audioguide.

These audio tours are available in French, English and Italian.

The museum offers discounted tickets at the rate of €9 for the following:

Here’s the proof that you’ll need.

Also, the following can get free entry:

There’s a floorplan map that you can pull up online if you want to get an idea of the layout of the museum. It’s not very difficult to get around if you pick up a map when you enter so I don’t think this is a museum like the Louvre where you need to have a game plan as to where you’re going to go.

But the floor plan can still come in handy when you’re trying to find specific pieces of art.

One of the coolest features of the Musee d’Orsay is located on the 5th floor and it’s an area where you can lookout to Paris and the Seine River through the face of a massive clock.

If you visit the museum, you definitely need to check out the clock.

There are a few different places to eat in the Musee d’Orsay and you can read about these places here.

But here’s a quick breakdown:

The main gift shop is located at the entrance to the museum and accessible with the museum admission ticket.

The Musée d’Orsay’s bookshop-gift shop is open from Tuesday to Sunday, from 9:30am to 6:30pm, with late night opening on Thursdays until 9:30pm

Hotels near the Musee d’Orsay

During our stay we stayed at the Park Hyatt-Vendome. It’s one of the premier hotels in the area but I wasn’t completely thrilled with the stay, to say the least.

Here are some commonly asked questions about the Orsay Museum.

How long do I need to visit the Musee d’Orsay?

The answer depends on your museum preferences. We spent about two and a half hours at the museum and that was fine for us. Some people might want to spend much more time in the museum, though.

Is the Musee d’Orsay a must-see?

I personally think that the Musee d’Orsay is a must-see in Paris. I would prioritize visiting the Louvre Museum first because there are more iconic works there and there’s just more to see but I would try to make my way to the Musee d’Orsay.

If you’re visiting the Louvre make sure you read my tips on visiting.

When was the Musee d’Orsay built?

The original railway station was built in built in 1900 but the museum officially opened in December 1986.

How to get to the Musee d’Orsay by Metro?

Are there free days offered?

Free admission to the Museum for all on the first Sunday of the month.

What I really like about the Musee d’Orsay is that it’s not too huge of a museum like the Louvre. I never felt like we even came close to getting lost which has happened to us in Museums more times than I’d like to admit. There’s also just a high concentration of really cool, iconic artworks. If you’re interested in impressionist and post-Impressionist you’ll absolutely love this museum.