Lounge access can truly be a lifesaver in certain situations as it can provide a much needed spot to refresh and relax. But sometimes the lounge access policies can be a little bit confusing because there are so many different ways to get access.

In this article, I will break down the American Airlines lounge access policies which include both Flagship Lounges and Admirals Clubs. I’ll cover everything including prices, guest policies, and also entrance into partner lounges.

What are Admirals Clubs?

Admirals Clubs are the standard airport lounges for American Airlines and you can find them all around the globe (keep reading below for a full list of locations).

In these lounges, you may find comfortable places to relax, free food and drink, showers, business meeting rooms, kids room, and sometimes other amenities as well.

In my experience Admirals Clubs are pretty nice but I would not put them on the same level as Amex Centurion Lounges.

I found Admirals Clubs to be pretty basic in terms of what they offer for free but they still get the job done. For example, for breakfast you might find Oikos and Chobanil yogurt along with a selection of fruits including pineapple, cantaloupe, melon, and mixed grapes, and possibly hard-boiled eggs.

If you do want hot food items you can pay for those and you can also pay for premium drinks.  For example, a Bloody Mary may cost you $10 and an imported beer may cost $8. If you are interested in what the full experience is like, you can read my full review of the Admirals Club at Houston IAH. (Just note that that is one of the smaller AA lounges and there are definitely more equipped Admirals Club lounges like those at DFW.) 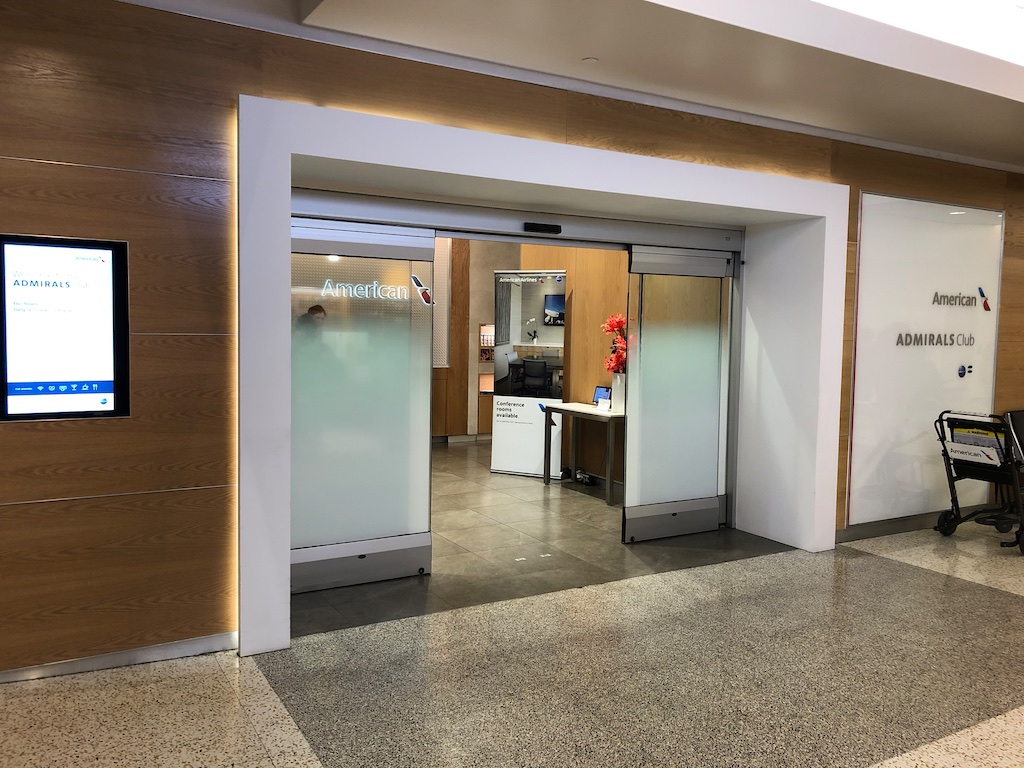 What are Flagship Lounges?

Flagship lounges are the premier lounges offered by American Airlines. These are only found in a handful of airports and offer a more premium dining and drinking experience.

For example, you can find dishes created in partnership with the James Beard Foundation, a premier American culinary organization. The admission policy for Flagship lounges is a little different but there is some overlap and I will go over the access policy in detail below.

There are several different ways that you can get access to an Admirals Club. For example, you could get access based on a purchased lounge membership, the class of your airline ticket, or certain types of elite status. I will break all of those down in detail below.

Before jumping into the different ways to get admission, it’s worth noting that as of November 2019 American Airlines made changes to their admission policy. Now, you must have a boarding pass for same-day travel on an “eligible flight” to enter a lounge.

An “eligible flight” would include any departing or arriving flight that is marketed or operated by American, any oneworld airline, or Alaska Airlines. 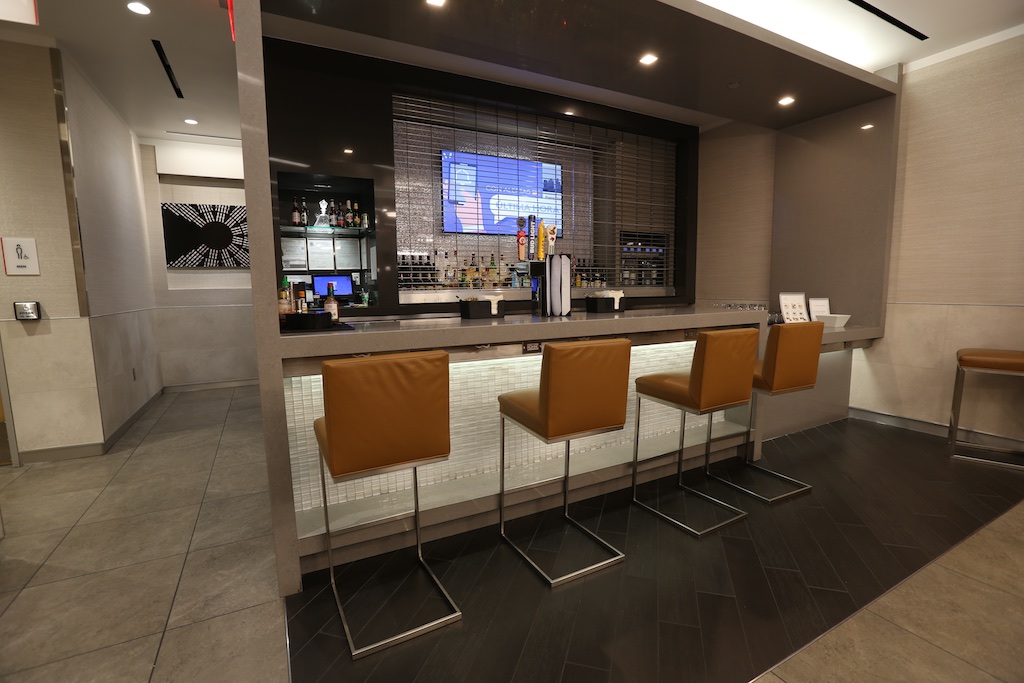 Below I will go into detail about all the different types of admission types for an Admirals Club lounge.

One thing that you need to remember is that the policies for things like documents needed for entry and guest entry can differ based on the type of admission you are granted. So remember to not assume that the guest policies will be the same each time you visit a lounge.

The first way to get access to an American Airlines airport lounge is to have an Admirals Club membership. These memberships come in different forms and you might have an annual membership or even a lifetime membership.

One of the easiest ways to get an Admirals Club membership is to get the Citi AAdvantage Executive World Elite MasterCard. This card has some great perks that would interest anybody looking to frequently fly with American Airlines, such as: 2X on purchases on American Airlines, free baggage, and priority boarding privileges.

If you are a primary cardholder on this card you will get a complementary Admirals Club membership.

If you are okay with spending some cash you can also purchase an Admirals Club membership. The price of your membership will be based on the type of elite status you have and also on whether or not you are purchasing an individual membership or a group membership.

Here are the prices. You should keep in mind that the annual fee for the Citi AAdvantage Executive World Elite MasterCard is only $450 so if you get approved for that card you can save a lot of money on your membership.

You can also purchase a membership with miles at the following rates:

If you have an Admirals Club membership then these are the lounges that you will have access to:

In order to be admitted into the lounge, you will need the following items:

You will be allowed to bring in immediate family members which would include your spouse, domestic partner and/or children under 18 or up to 2 guests. It’s worth noting that guests must be accompanied by the eligible member and present boarding passes for same-day travel on American or a partner airline.

If you are flying first class or business class then you might get lounge access but it depends on your route.

If you are flying on an international route then you will get lounge access for the following routes:

Flights between the U.S. and:

It’s worth reiterating that for Mexico you only get lounge access if flying between the US and Mexico City. I have personally flown American Airlines to other Mexican destinations and unsuccessfully persuaded an agent to allow me access. :/

If you hold elite status with American Airlines you can get lounge access as long as you hold Executive Platinum, Platinum Pro, and Platinum and you are flying on the following routes:

Flights between the U.S. and:

If you hold elite status with the oneworld alliance you can also get access. This includes customers on all departing flights marketed and operated by American or a oneworld airline (regardless of cabin).

Another route that you can go is to purchase a one day pass at domestic and international Admirals Club locations for $59.

The cool thing about a day pass is that you should be able to use it at multiple Admirals Club lounges if you have a connection. For example, I recently purchased a day pass and I was able to use the lounge in Houston (IAH) and Dallas (DFW) on the same day.

Another cool thing is that the day pass purchases usually trigger airline incidental credits. So if you have a card like the American Express Gold Card that has a $100 airline credit, then you can essentially get into the lounge for free.

Purchasing a day pass can be tricky sometimes because they will only sell you a day pass if they are not at capacity. So if you are flying during busy hours then you might want to have a back up plan.

One thing to keep in mind is that the Citi AAdvantage Platinum Select World Elite does not provide you with a complimentary day pass to lounges. Unlike the United Explorer Card which gives you an annual free day pass for two people, that is not one of the perks of the Platinum Select.

You can bring up to three children that are under 18. Children must be accompanied by the adult day-pass holder and present boarding passes for same-day travel on American or a partner airline.

If you are an authorized user for the Citi AAdvantage Executive World Elite MasterCard you will not get a complete Admirals Club membership but you will still get entry into Admirals Club lounges.

As an authorized user, you will get access to domestic and international Admirals Club locations.

An important requirement to remember here is that you will need to have your valid Executive card on you when visiting a lounge in order to get in. Since you won’t have an official Admirals Club membership, that card is the only ticket to your admission.

You will be allowed to bring in immediate family members which would include your spouse, domestic partner and/or children under 18 or up to 2 guests. It’s worth noting that guests must be accompanied by the eligible member and present boarding passes for same-day travel on American or a partner airline.

As mentioned earlier, you can find Admirals Clubs all across the globe. Here are the current locations:

So just because you see a lounge listed below, don’t assume you’ll get access and instead be sure to check about the requirements for that specific lounge and in particular what type of boarding pass you will need. You should be able to find the requirements here.

There is some overlap with the Admirals Club lounge access. One of the biggest differences is that you don’t get access to Flagship lounges if you have an Admirals Club membership or a Citi Executive Card. But here is a rundown of the people who qualify for Flagship lounge entry.

You can read more about the Flagship lounges here.

As mentioned above, the locations for Flagship lounges are much more limited.

It’s worth pointing out that you can also get access to the International First Class Lounge – Terminal 3 in London (LHR). However, you only get access if you’re traveling in first on a qualifying international or transcontinental flight marketed and operated by American or a oneworld airline.

Overall, the lounge access policy for Admirals Club and Flagship lounges is pretty clear-cut. If you are looking for an easy way to get access, I would recommend looking to the Citibank Executive Card since that is a great way to save money and give free access to authorized users.