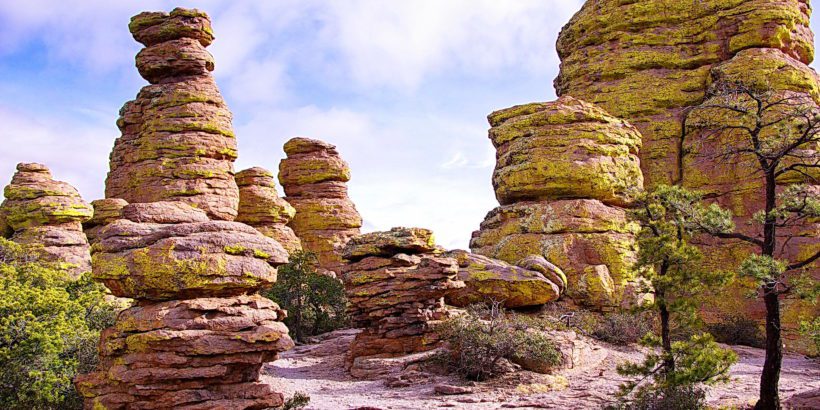 Standing erect like stone terra-cotta warriors, rows of towering gray pinnacles dominate green hillsides, each uniquely chiseled and sculpted into its own work of art. It’s a phenomenal sight, and, as you venture deeper into Chiricahua National Monument—“The Wonderland of Rocks”—you discover hoodoos unrivaled in their gravity-defying postures.

While many amaze you, there’s one in particular, known as Big Balanced Rock, that astonishes you with its whittled core resembling the bottom of a spinning top. Located in the Chiricahua Mountains in southeast Arizona, Chiricahua National Monument is home to some of the most striking vertical rock formations in the world and is a perfect road-trip stop if you are traveling along Interstate 10 in southern Arizona.

The history involving the Apache Indians and Chiricahua National Monument is fascinating. The mountains were once home to a tribe of Apache Indians known as the Chiricahua Band. Two of the more famed leaders of that band were Cochise and Geronimo.

The band constantly clashed with encroaching settlers in the nineteenth century, and the rocky valleys now known as Chiricahua National Monument served as their safe haven from attackers.

The Apache Indians were known as brilliant warriors and artful strategists, fighting off settlers from Mexico, Spain, and elsewhere for centuries, before facing their toughest enemy in the US Army during a series of bloody conflicts throughout the nineteenth century.

Many of the overlooks, such as Massai Point and other scenic sites, are named after prominent figures from the Chiricahua Band and other tribes involved in these seemingly endless battles against encroachers.

As mentioned, the Apache tribesmen were known as brilliant, dedicated fighters, a character trait developed and honed over hundreds of years of defending their sacred homelands.

Although they eventually lost their battle against the US Army, the mark these great warriors left on the history of the area is unforgettable. The great war leader Cochise, whose name in the native tongue meant “strength of oak,” was a big man for his time and led the famous Battle of Apache Pass in 1862, where he and his fellow warriors faced artillery fire for the first time—the modern European weaponry that they could not overcome.

And of course Geronimo, perhaps the greatest Apache warrior of them all, was highly respected as a skilled wartime strategist, as well as for his fierce determination to save his native people and their great tribal traditions from the modern progress of Western civilization.

Located thirty-six miles or so from Wilcox, Arizona, geologists have theorized that the incredible rock formations at Chiricahua are the by-product of a massive volcanic eruption that devastated the region nearly twenty-seven million years ago.

It’s estimated that two thousand feet of the hot molten lava and ash settled and hardened into something called rhyolite tuff, eventually eroding into the magnificent rock that we see in the park today.

Another interesting geographical fact about the Chiricahua Mountains is that they are located where four major ecological regions meet, namely the Rocky Mountain and Sierra Madre ranges meeting the Sonoran and Chihuahuan Deserts.

This unusual convergence of terrains makes for a very rare composition of flora and fauna in the area where different types of vegetation coexist unlike many other places in the world.

You’ll see remarkable collections of yucca from the Chihuahuan Desert, pine and spruce from the Rockies, oak and sycamore native to Arizona, and different varieties of other types of pine and fir.

And from this incomparable ecological environment comes a variety of local wildlife, including over three hundred different species of birds, white-tailed deer, javelina, and the coatimundi.

The coatimundi is a slightly cuddlier version of a raccoon that inhabits the Southwest United States and areas as far south as Central and South America where they are threatened by hunters. They exhibit a number of peculiar poses and behaviors to communicate with their counterparts like hiding their noses with their paws to indicate submission and snorting as they dig vigorously into the soil to claim territory.

Given the intensely hot and arid desert climate, it comes as no surprise that varieties of rare reptiles can be found at Chiricahua.

Keep an eye out for snakes, those slithering, mysterious reptilians which live and thrive in the dark crevices of these desert rocks. You’re bound to come across an array of desert lizards here as well.

One of them, the short-horned lizard, is known to squirt a stream of blood from its eye at predators when camouflage efforts fail. This tactic isn’t meant to scare predators but to leave an awful taste in the predator’s mouth to deter them from engaging in the attack.

Look for horned lizards near anthills where they often lay, waiting for their next meal. Another one of the more interesting characters you might see crawling around the rocks is the box turtle, known for its beautifully ornate and domed shells.

Upon your arrival, there are many interesting and exciting things to consider doing at Chiricahua.

You can start off by checking in at the visitor center and catching a short ten-minute film on the twenty-seven-million-year-old volcanic history of this rare national monument.

If you only have a few hours to see the park, there’s an eight-mile paved scenic road you can take around the park that offers great vantage points of the rocks, especially those found at the end of your drive at Massai Point.

Use the telescope mounted there to view the details of the intricate grooves and designs of these amazing hoodoos. There’s also a short quarter-mile round-trip hike that will take you up close to a seemingly endless array of these rare Chiricahua “stone warriors.”

One of the best things about this park is that there are trails for all kinds of different travelers. There are plenty of short trails (even a wheelchair-accessible trail), moderate trails, and strenuous trails to choose from.

If you only have about half a day, then look into doing the Echo Canyon Loop Trail. It should take you about two hours to complete, and, in addition to seeing some of the spectacular rock formations, you’ll get to see a lot of the local vegetation like yuccas, agaves, prickly pear, and hedgehog cactus.

If you have an entire day to hike and explore, then consider venturing out to the Heart of Rocks area, where you’ll see and experience a series of truly unusual rock formations such as Duck on a Rock and Big Balanced Rock.

The trail I recommend for those able to handle a more strenuous hike is the Big Loop Trail. This popular trail is about ten miles long, where you’ll travel up and down and across the canyons, catching breathtaking views of everything that Chiricahua has to offer, including the famous Big Balanced Rock.

A quick tip for those heading out on the Big Loop hike is to start counterclockwise in order to access the most interesting scenery the quickest. There are other slightly shorter options (seven miles versus ten miles) to explore the Heart of Rocks area, but, to really see everything the park has to offer, the Big Loop Trail is perfect.

Chiricahua National Monument has very dark skies, so it is perfectly suited for endless stargazing and a very pleasant camping experience. Camping costs $20 per night, and the sites offer basic amenities, such as flushing toilets, sinks, bathrooms, etc.

Getting there is straight forward. Chiricahua National Monument is located 120 miles southeast of Tucson. Take I-10 east from Tucson to the first exit for Willcox. Travel 3 miles into town to the stoplight and turn right. You will follow Arizona State Highway 186 for 32 miles to the junction of Arizona State Highway 181. Turn left and continue 4 miles until you reach the Chiricahua entrance station.