If you like Harry Potter and you’re going to London you pretty much have no choice but to do the Harry Potter London Tour at Warner Brothers Studio.  From strolling through the cobblestoned Diagon Alley to checking out Weasley’s crooked dining room, everything in the tour is extremely well done and there are thousands of props to see along with the rebuilt scenes from the movie.

I’ll try to give you an idea of what to expect along with a sneak peak at some of the amazing sets without spoiling too much of the fun for you and who you how to get tickets for your studio tour.

Your Harry Potter London tour experience begin before you arrive at the studio.

Get sorted by the Sorting Hat

The first thing you have to do is get selected to your respective house. That’s right. Go to the official Harry Potter site, Pottermore.com, sign-up, complete the questionnaire and let the Sorting Hat determine your fate. I’d like to just point that I did get chosen for Gryffindor (*ahem*) while Brad ended up with good ole Ravenclaw.

Some of the questions you’ll answer online are actually kind of thought provoking and will make you think about some odd scenarios but the test only takes a few of minutes. For the true Potter fans, finding out your house before you go is a must.

There’s also a whole gaming community on the site where you can earn points for your house by competing in wand duels and things like that but after getting it handed to me in my first few attempts I gave it a rest pretty quickly (some of the people on that site are pretty serious and on a different level).

The second thing you need to do is book your tickets online you can do that here as far in advance as possible. This is especially true if you are wanting to visit any time close to the holidays.

In such a case, you need to book at least a month ahead if not longer to have a chance at getting your preferred time slot. If you’re visiting at any other time of the year, you should be okay waiting even only a few days before your visit but do try to still book early.

It seems pretty steep, but this is one of the pricey attractions in London (it’s actually located outside of London) where you’ll actually get your money’s worth. If for some reason you have to re-schedule you can do so but it’s £10 to reschedule your tour so try get your date right the first time.

One thing we found out is that you can actually enter your tour before your designated time. Try to keep it within reason but we were about 45 minutes early for our designated slot and they just let us go right on in. When choosing your time slot one thing you might want to think about is doing a later tour. The reason? Field trips!

I’m assuming UK schools are like the US in that they usually don’t do field trips later in the day so your chances of being hit with endless herds of school children may be less. Of course, this is Harry Potter, so you’ve got to expect for tons of kids to be running around but during our tour (which was around noon), there were endless droves of school children pouring in, which made it impossible to get good photos of some of the sets. So just think about that when planning.

During the tour, you are free to roam about the movie sets at your own pace with the one exception being the Great Hall. In there, you’re only given something like 15-20 minutes before the next group arrives so it’s a little quick (though you can always hop back in the room once the next group enters).

The Harry Potter Studio Tour London Great Hall is pretty stunning and lining the walls are uniforms and costumes worn by the characters of the different houses, including some of the original attire worn by none other than Harry Potter himself.

The tables are set with all of their fancy silverware and decked out in the most delicious-looking fake food you’ve probably ever seen. Apparently, the producers used real food in the first Harry Potter but after old food started causing a nasty stench in the place they moved to decorative props instead.

Tons of extremely detailed sets and props to check out

From there it’s off to wherever you’d like to venture.  You’ll be amazed by the thousands of props on display. The attention to detail that went into making everything from the wand boxes to the potion bottles is utterly mind blowing. 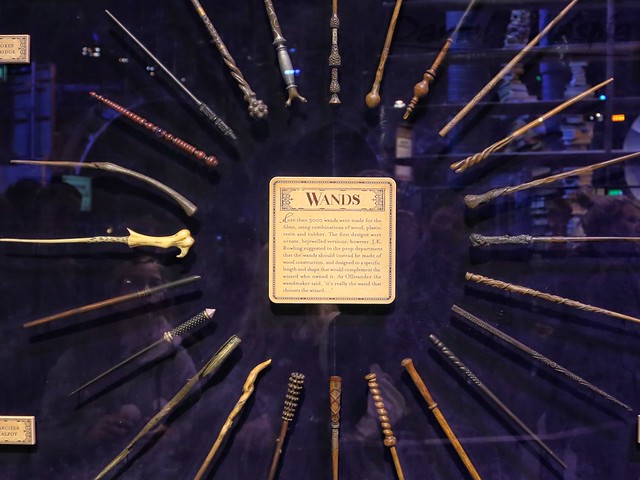 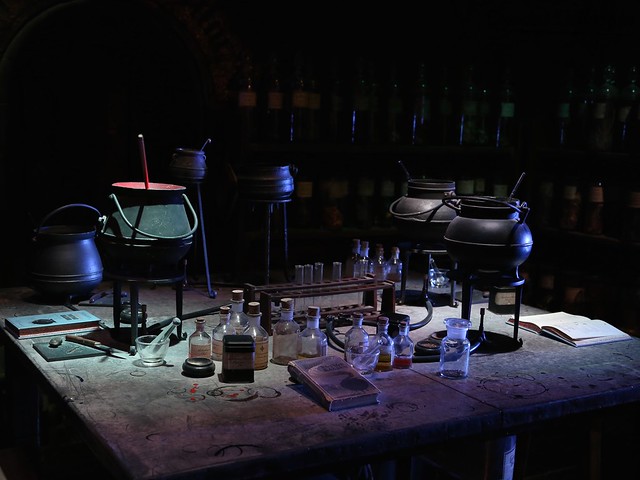 The studio has all of the major sets you’d probably expect it to have. You get to see the Gryffindor common room, the dorm rooms, Dumbledore’s “office,” the potion room, a room from the Weasley’s house, and a bunch more. At each exhibit there are little information panels with tons of interesting facts about the props that you’d likely never know. Also, while we didn’t do the headset tour, I was told that there’s plenty of interesting info to learn while doing those.

Although we didn’t, you can opt for a green-screen experience where you can actually ride a broom in front of a green screen and get some kind of sweet video/photos made. I think they even dress you up a little with a scarf and cloak. I’m not sure what it costs to do that but it seemed like a lot of people weren’t passing up the opportunity to do a little broom flying. 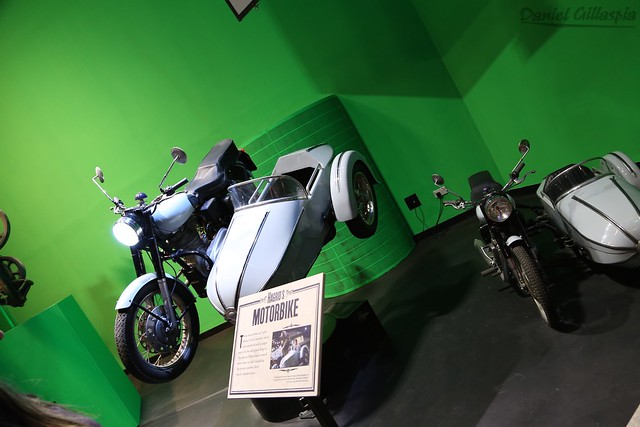 After you’re done exploring the first building you move into the cafe area. Here, they sell hotdogs and other food items  (even breakfast dishes before 11:30) so you can relax a little bit and get off your feet if you want. The one thing you have to try here is butterbeer!

First, butterbeer is not alcoholic so don’t get too excited. It tasted just like cream soda to me (which I liked but Brad didn’t care for). The foam on top of the “soda” is extremely sweet and tastes like butterscotch.

I saw where some recommended only getting one cup for two people but honestly the cups are so small I recommend going with one cup for each person. I’m not 100% sure, but I think each glass of butterbeer costed about £3.

After you drink up on butterbeer you head outside into the parking lot for some more interesting set pieces. There’s the triple-decker purple bus that you won’t miss as soon as you step out, the Covered Bridge from Hogwarts, Harry’s house, and if you visit during the winter, you’ll be showered with a bit of snow as you walk outside.

From there, you enter into the third portion of the tour. Once you enter the third building  you’ll come across a number of fascinating props and costumes used in the different movies. One of my favorites was seeing Voldemort’s little (disgusting) veiny corpse from the Deathly Hallows II and some of the other moving props. It’s really something to see these props close up and it gives you more appreciation for the artists who likely spent hundreds of hours working to create these props. 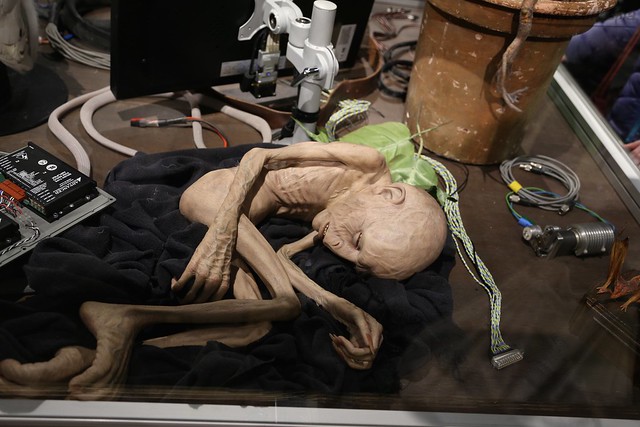 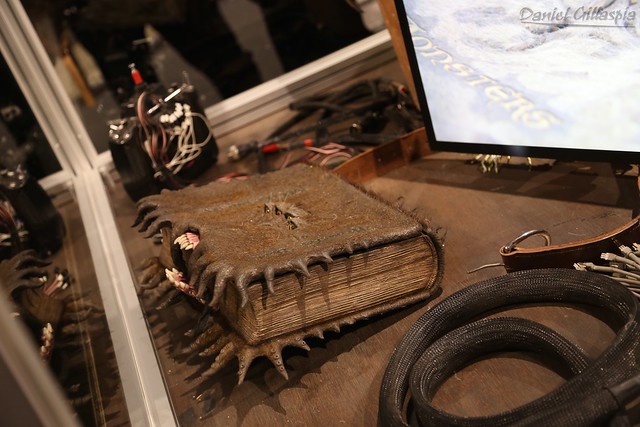 After that, the next main attraction is Diagon Alley!

It’s really cool to see the Weasleys’ Wizard Wheezes shop, Ollivander’s Wand Shop, Florean Fortescue’s Ice Cream Parlour, and a few others. The lighting changes from dim to bright pretty quickly as you walk through so be ready to adjust your camera settings if you’re shooting manual with a DSLR. Overall, Diagon Alley was one of the coolest portions of the tour and really make you feel like you’ve entered into the world of Harry Potter. 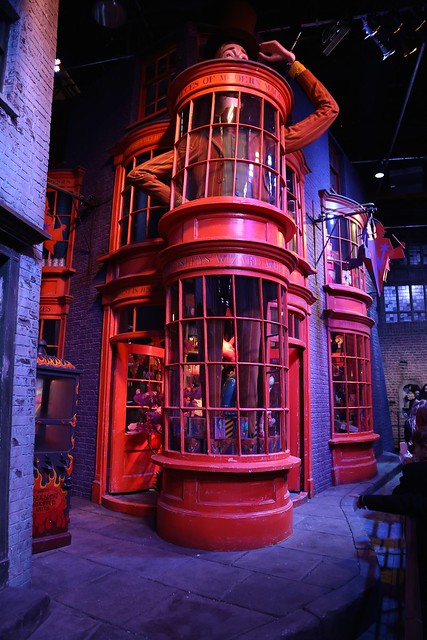 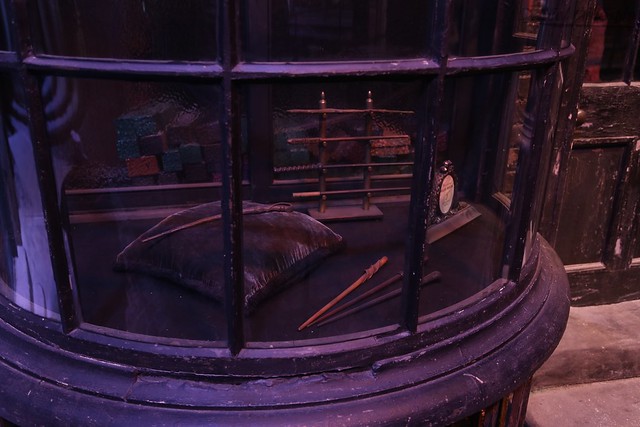 The final attraction that awaits you is the magnificent Hogwarts model.

The model of the castle and the surrounding rocky mountain upon which it’s built, is simply phenomenal. It was much more massive and far more life-like than anything I’d imagined it would be. As the lights dim in the room, yellow lights twinkle throughout the castle, creating a life-like appearance where you’re left almost anticipating someone walking out of the castle.

If you visit in the winter the castle is topped with “snow” and really is spectacular. It may surprise you how long you spend in this room as there’s plenty of different angles to admire this work of art from.

Once you leave the last exhibit you end up in the gift shop.

It’s a pretty large gift shop with tons of different types of souvenirs, from wands to sweaters and scarves to candies from the movie and all kinds of different stationary items. As you might expect, it’s all pretty overpriced, especially the clothing items. We left with a magnet and a chocolate frog so we got out of there without splurging which was great but if you intend on getting any kind of clothing souvenir keep in mind that it’s going to cost you.

Overall, the Harry Potter London tour is a must-see attraction in London for any Harry Potter (of any age). I didn’t hop on the Harry Potter bandwagon until about a year ago and I thought this place was pretty amazing so I could only imagine how other must feel who’ve read all the books and seen all the movies over the years.  It’s a little pricey but the way that this place captivates your imagination is priceless and completely worth the visit.