When we visited to Tokyo, we wanted to try out some very cultural experiences and a night food tour through the streets of Tokyo seemed like the perfect option. We spent about four hours trying out all sorts of dishes that I’d never tried (or even heard of) and learned a ton about Japanese culture while exploring different parts of Tokyo that I probably would have otherwise never seen. The experience was definitely one of my favorite all-time things to do when traveling, and I’d highly recommend this tour with Urban Adventures to anyone looking to do a food tour in Tokyo.

Our tour started with meeting at the plaza at JR Yurakucho Station at around 5pm. We’d just finished up a Japanese green tea ceremony on the other side of the city and didn’t have much time to spare, so we hopped into a taxi to make our way over to Yurakucho Station.

At Yurakucho Station, we waited for only a couple of minutes in the busy plaza right outside the station. Our guide, Meg, picked us out from the crowd with ease and then found the other couple that we would be going along with. We only had four people total in our tour, but I know they can accommodate additional people if those slots are booked. I really liked only having four people in our group, though, as it allowed us to have a more intimate experience.

Meg first took us through some interesting alleyways underneath the train tacks that were lined with different restaurants and decorated with Japanese lanterns. 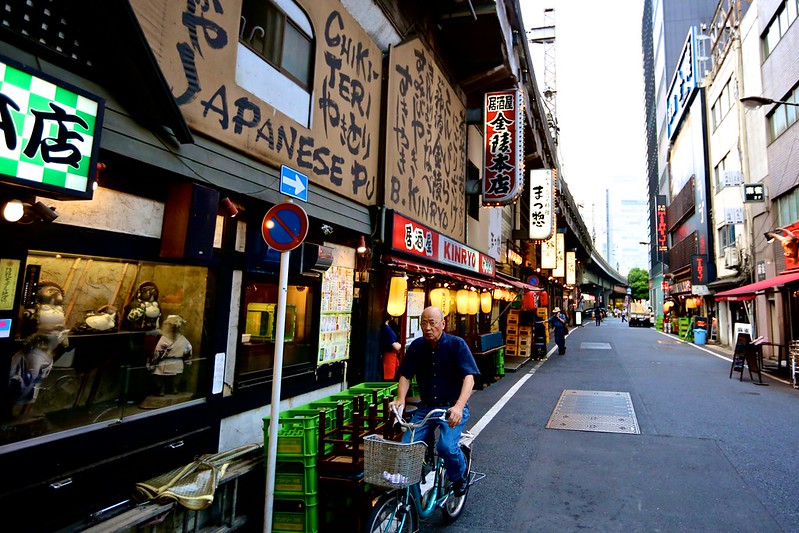 Some of the alleyways were really picturesque. 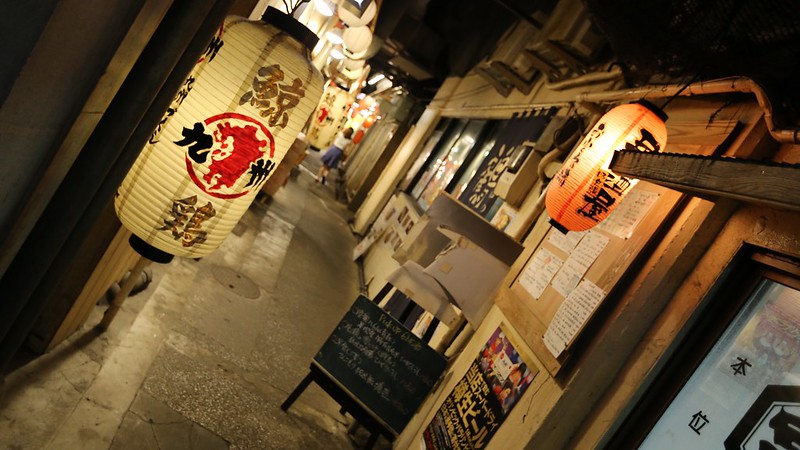 As we made out way through these narrow corridors (and throughout the entire tour), Meg had endless facts to provide us with about Tokyo, Japanese culture, and of course, food. I honestly kind of wish I would’ve been taking notes, because it was all really fascinating info. 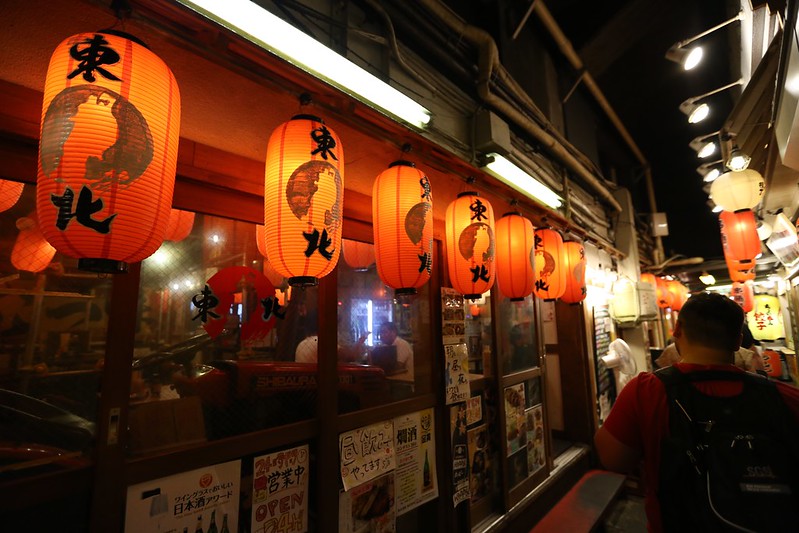 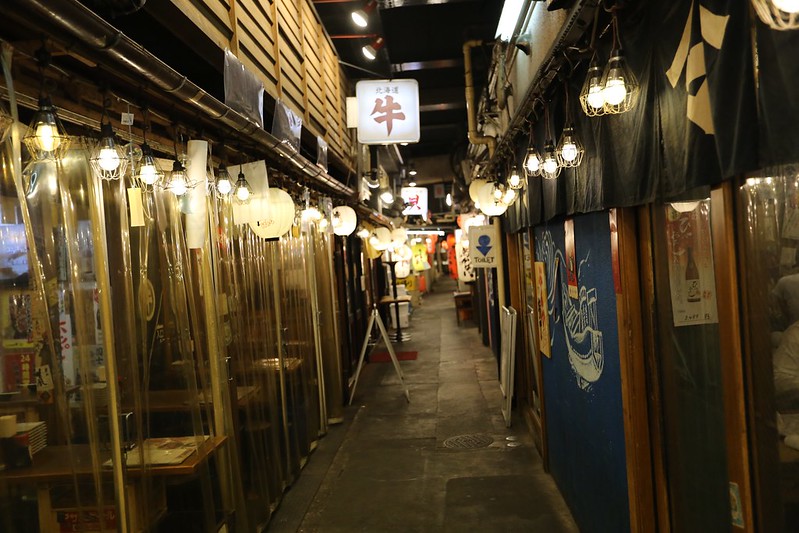 One of the more interesting sights were the hanging squids and other forms of seafood out on display at some places. 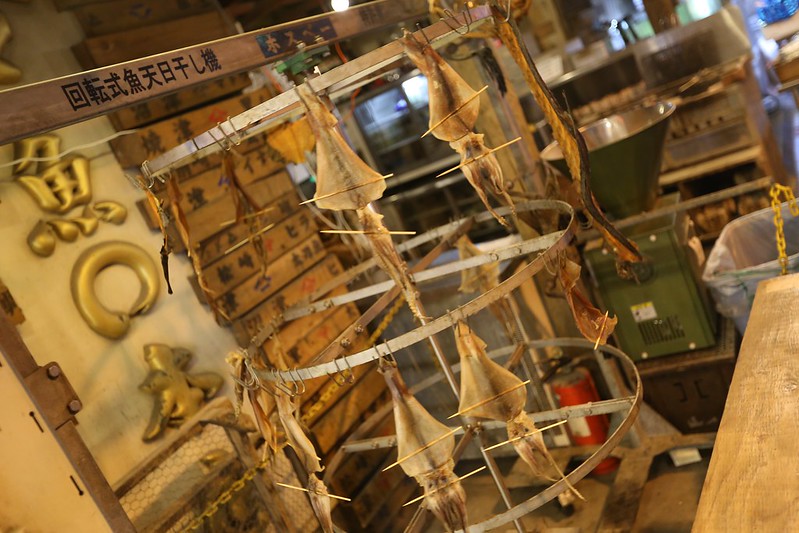 We then arrived to the first restaurant, a smaller pub-like venue, which I believe is a pretty popular spot in Tokyo. Luckily, the guide takes you there before the rush, so you don’t have to deal with the crowds.

We started off with a round of drinks. The other couple went for Japanese beer while Brad and I went for hot sake and our guide went with a bottle of cold sake. 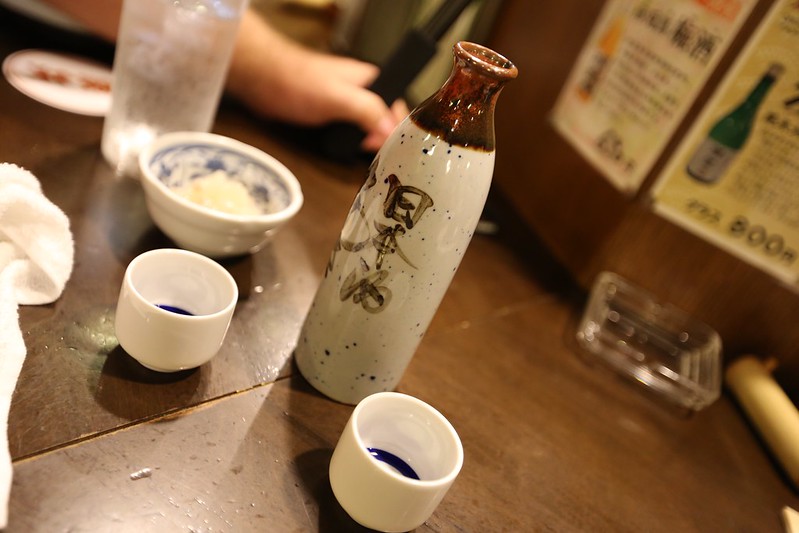 I learned a lot about sake. First, “sake bombs” are definitely an American/fratboy invention and not something Japanese people are accustomed to. The thought of mixing sake with beer while barbarically slamming the table to drop a cup of sake from two chopsticks overhanging the glass seemed to humor everyone (understandably so). Second, just as many people drink sake hot as they do cold — I always thought hot sake was the norm. Third, Japanese people serve sake in little glasses, which they use to slowly sip the sake, rather than downing them like big shot glasses. Good to know (now).

While we downed some drinks the chef labored right in front of us through the glass. 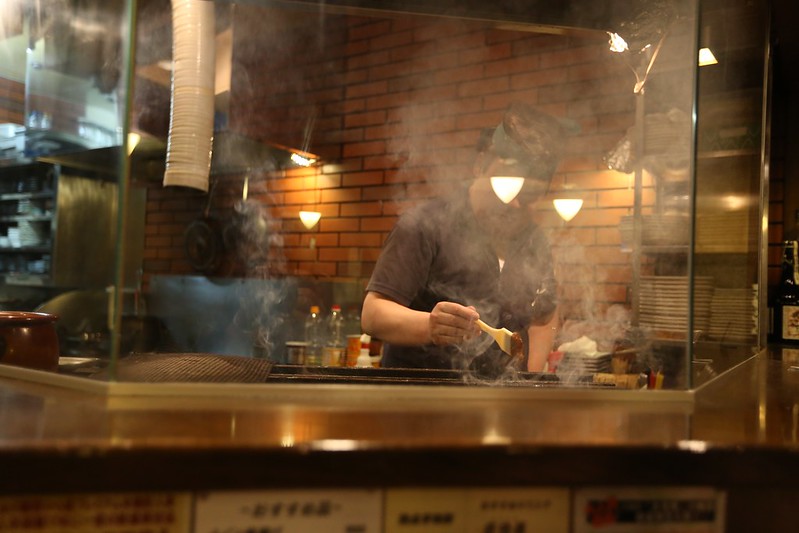 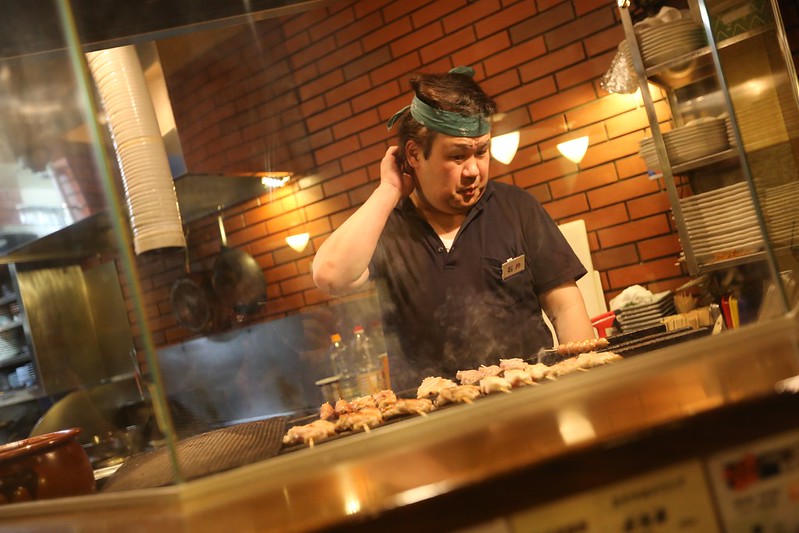 After a few minutes, we were brought two plates loaded with different foods on skewers. On one plate, we had Shiitake mushrooms, ginkgo nuts, fried tofu topped with soy sauce, ginger, spring onions and bonito flakes (dried fish) in one plate. I’m not a mushroom eater but I did try the shiitake mushrooms and didn’t think they were bad at all. The ginkgo nuts had a weird fleshy texture to them but were alright and the fried sushi, even with bonito flakes (dried fish flakes) covering it, was actually delicious. Big props to the chef. 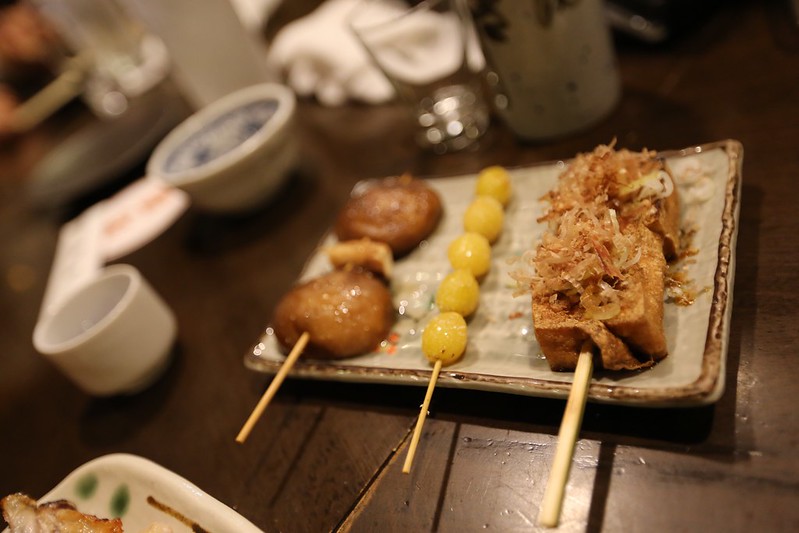 Our other plate was really packed with protein. It came with chicken wings, shishitou peppers, asparagus and bacon, pork and shiso (perilla), and chicken breast topped with picked plum paste and shiso, all seasoned with salt, cooking sake, and leek. I don’t think there was a single item on this plate that I didn’t enjoy eating.

If you’ve never tasted shiso (perilla), it’s pretty phenomenal. It’s not easy to pin point the taste because it’s got a little bit of an herb taste, cilantro taste, and even a little citrus/mint flavor going on. I’d never had anything like it before but I fell in love with it as did most of us, though the guy next to me didn’t care for it.

The shishitou pepper we had is seriously fascinating. The peppers are usually sweet but about one out of every ten of these peppers is really spicy! It’s like Russian roulette but with vegetables — you never know what you’re going to get until you bite into it. A guy in the other group was the lucky one to get a spicy pepper and from what I could tell by the redness of his face, it was very spicy. 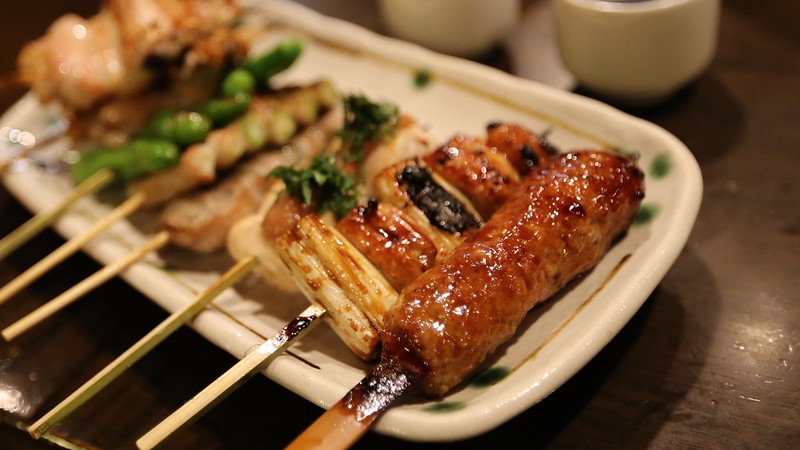 After a couple of sake rounds and trying out all these delicious dishes and seasonings, we made our way to the subway to head to the next destination. Our guide had already pre-paid for our tickets so we got in and out in a breeze. 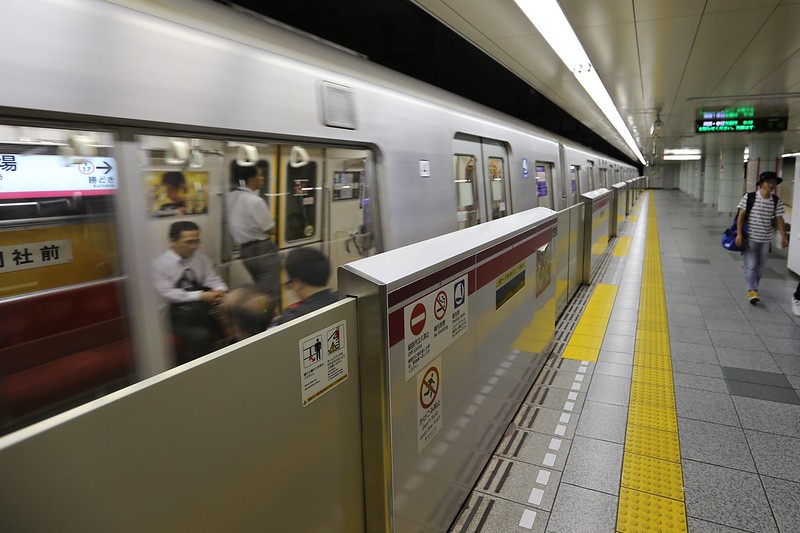 The next stop was for sweets. We stopped at this place in Tokyo called Ginza, a popular upscale shopping area of Tokyo, recognized by many as one of the most luxurious shopping districts in the world. 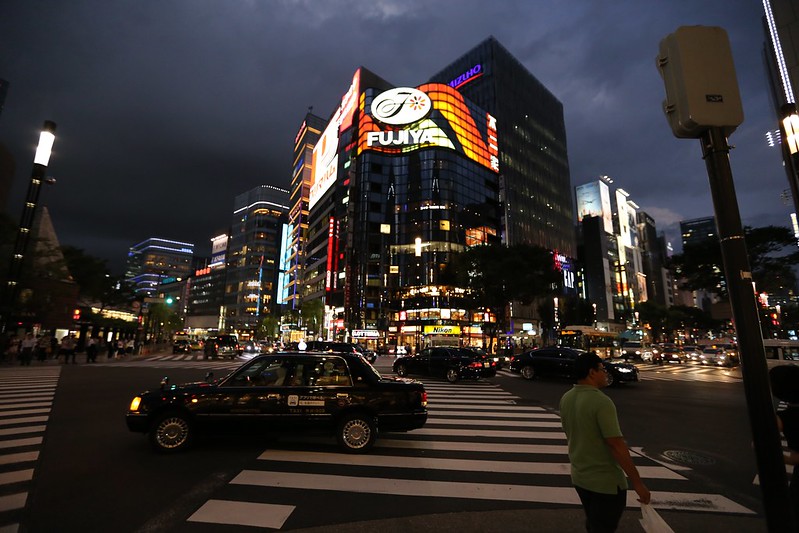 The streets were pretty alive  as we were there on a weekend night. 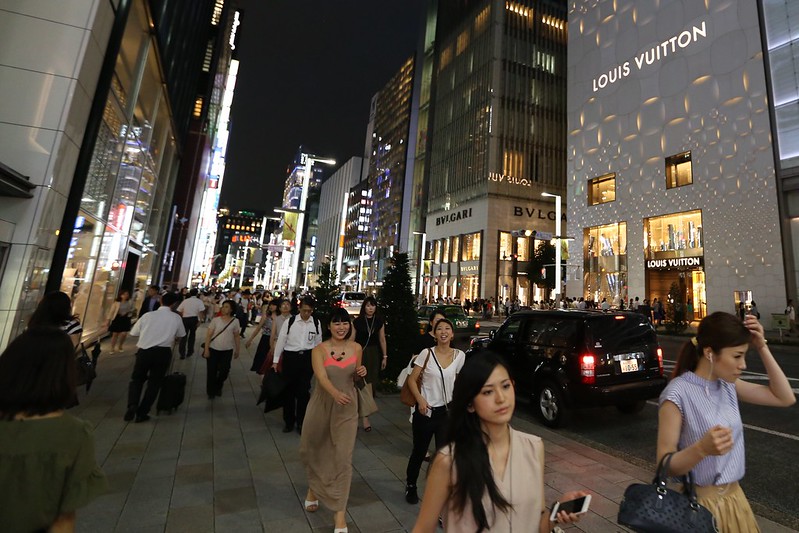 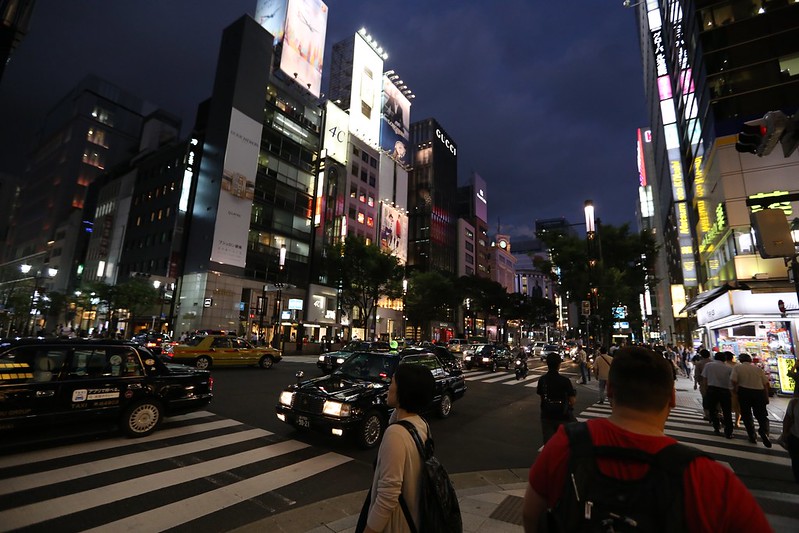 It even has one of the crazy-busy crosswalks. 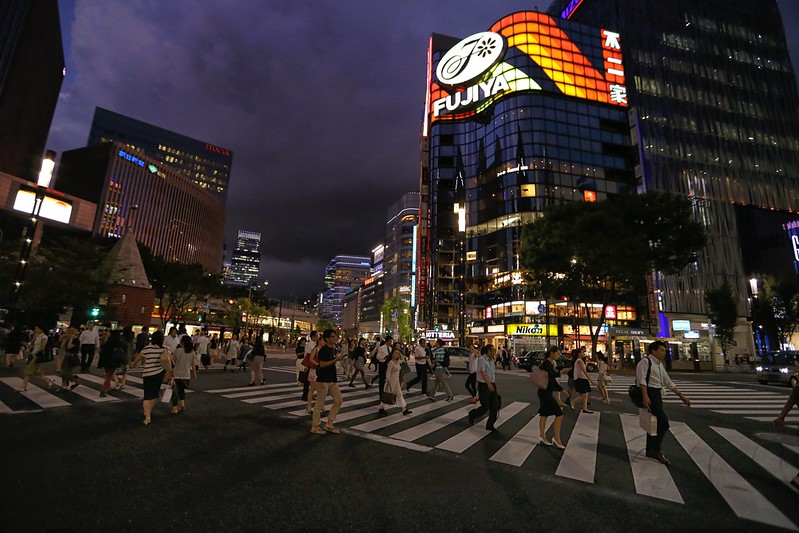 Finally, we arrived at the sweet shop, where we ordered something called “anzu daifuku.”

Anzu = apricot and daifuku is the name of the sweet that has rice cake (mochi) filled with red beans (anko). I really don’t think I could ever explain the taste and texture of the mochi if I tried a million times but of course I’ll try.

Anzu daifukugot has got this very gooey texture on the outside and then a slightly tart apricot taste that’s balanced by the red bean flavor quite nicely. It took me a couple of bites just to process the weird tastes and textures but it was definitely tasty and I finished mine.

Then it was off to Tsukishima. Tsukishima is known for the large number of restaurants that you find lining the streets. We ate at one of the coolest places I’ve ever been to while there. It’s a lively place where groups of people come together to have a few drinks and cook up a meal together. At this place, it’s like having your own little hibachi grill at your table, except you are in charge of cooking the meal! (If you don’t want the responsibility you can request for someone else to take charge or at least assist you). 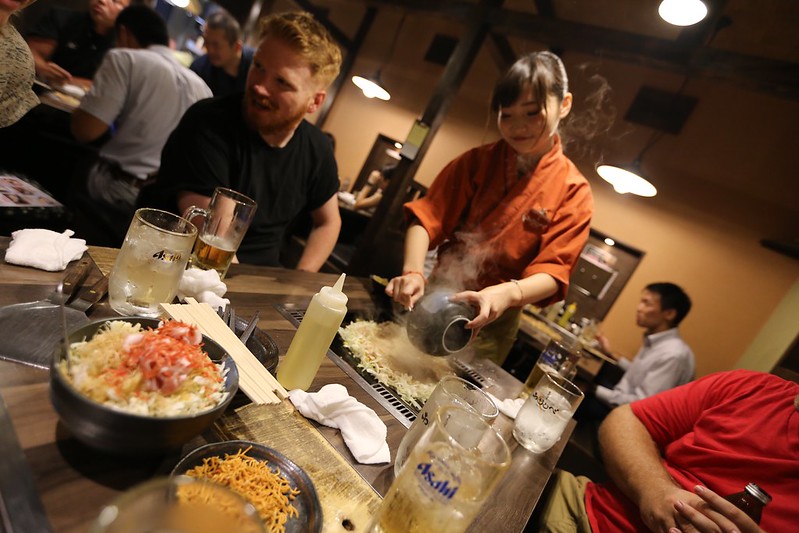 Our guide helped us pick out some ingredients to combine for our meal and we chose monjayaki. This dish originated in Tsukishima and is what Tsukishima is known for. It’s basically a batter put together of different ingredients that I definitely was not able to discern with my taste buds. The batter is then pan fried until it begins to caramelize, so that you can then scrape of pieces of the monjayaki and eat it as it cooks. The process is kind of difficult to explain but it’s a lot of fun to partake in. 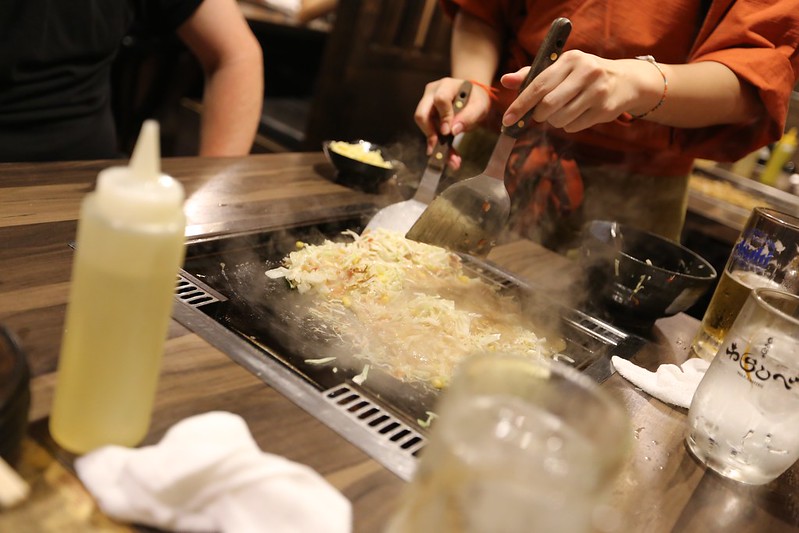 We all got to try our hand at cooking. 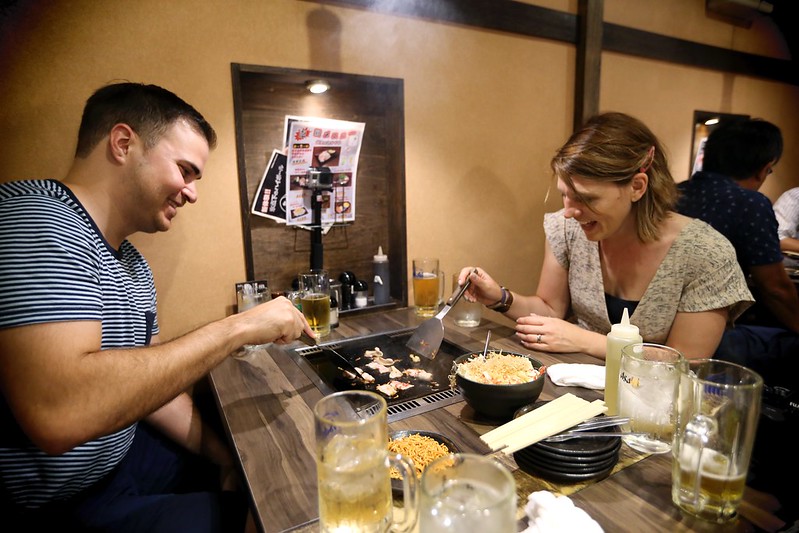 At first the batter looked a little iffy, but once cooked, I realized why so many Japanese people love this stuff. Hint: it’s delicious. 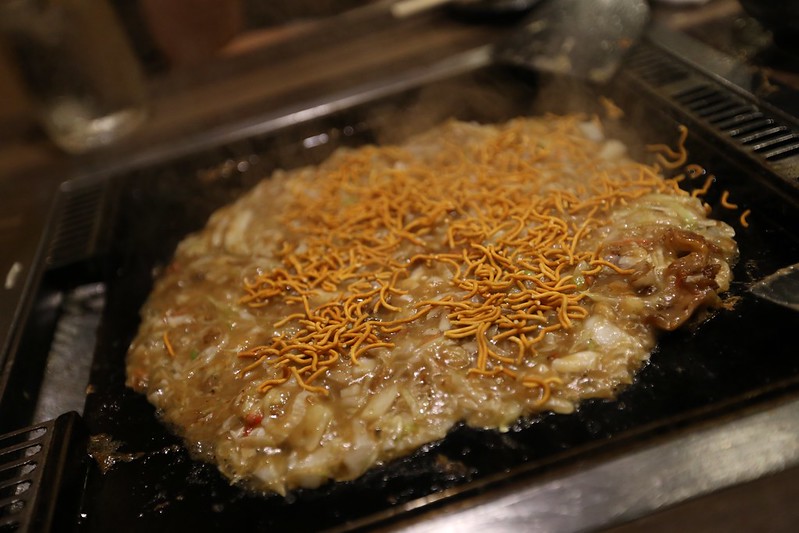 The second dish was okonomiyaki, which is similar to Monjayaki and takes on the same concept of pan frying the batter until it’s ready to be eaten.

Okonomiyaki is basically a Japanese savoury pancake and some even call it a Japanese pizza. The batter is made of flour, grated nagaimo, water, eggs, cabbage, and usually contains other ingredients including meat (or seafood) and vegetables. 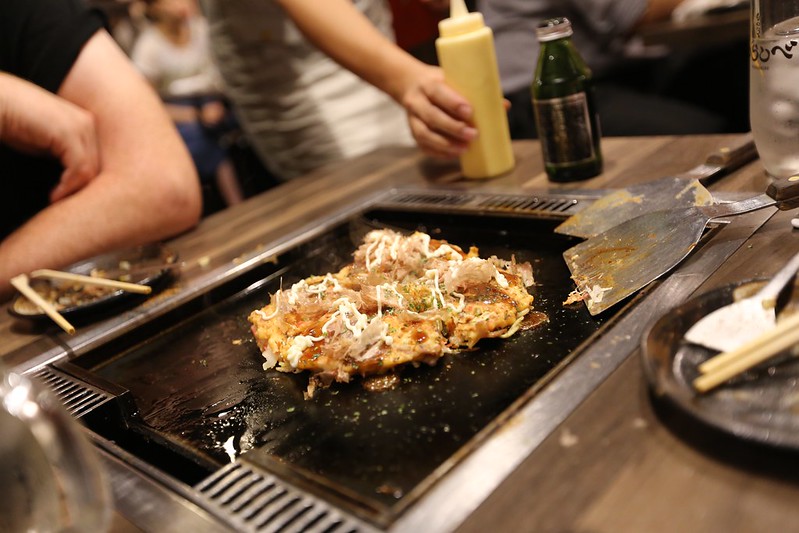 We then finished off our meal by making these chocolate egg rolled omelettes, which were a nice way to end the meal. 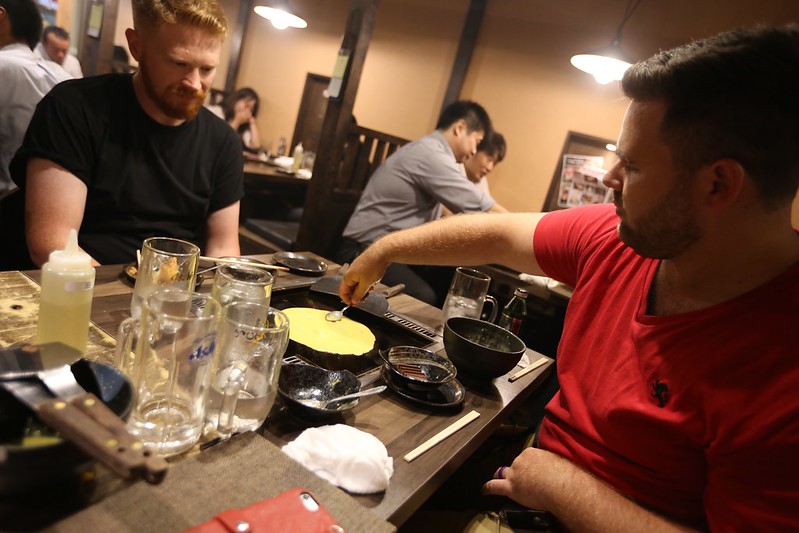 By the end of the night, I was absolutely stuffed and tired. We’d been roaming Tokyo four over four hours and eaten a fair amount. I’d held off from eating before the tour to make sure I’d be hungry but I still was very full by the end of it.

Our guide Meg really made this experience for us. She’s very talented at her job and has encyclopedic knowledge about Tokyo and Japan in general. She’ll be able to tell you everything you need to know about the foods you’ll try and also help you out with inside tips on things to do and places to see in Tokyo. If you book this tour, hopefully you’ll get her or someone just as talented.

I recommend you to book early in advance as much as possible, though, because these food tours fill up quickly!

Wandering through streets and alleyways that we would have never discovered on our own and trying out tons of different Japanese dishes that again, we would have never known about, was a tremendous cultural experience. We learned so much about the city of Tokyo, other places to see, and had a lot of fun and lively conversation through the night. This food tour through Tokyo was the highlight of my time spent in Japan and definitely one of my favorite things to ever to do. I’d rebook this tour in a second and do it all over again, so I highly recommend it to anyone looking do something cultural in Tokyo.